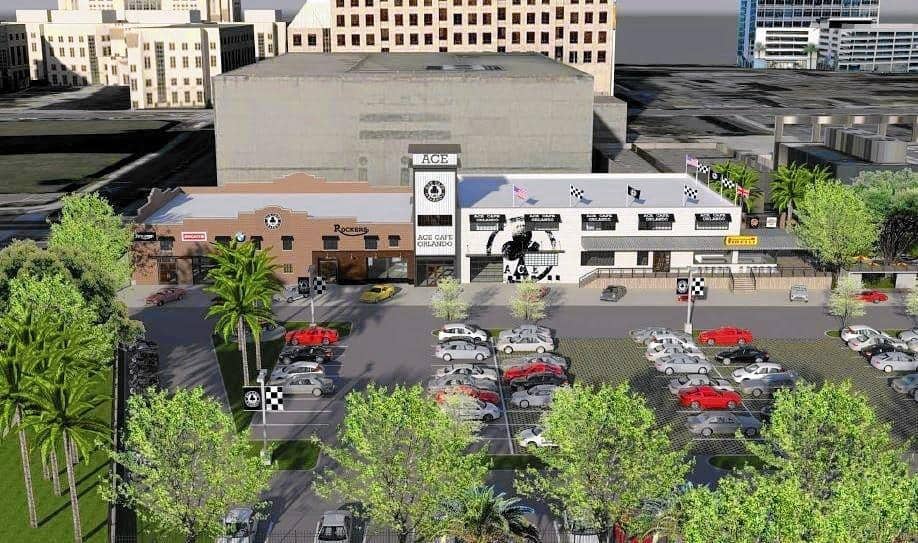 Whilst I am still in The UK spending time with my poor Mum, I thought I would try and add a video etc for the Blog and keep you up to speed on other things.

The Ace cafe for instance,
Check out the below video link to the recent “Ground Breaking” ceremony with the Mayor of Orlando, Buddy Dyer – some great vehicles turned up for the event! At some point it was “Gentlemen Start Your Engines”, so that day will forever now be known as the “Ground Shaking” event and be held annually! It is planned that the cafe be fully operational in October.

Ace Cafe, a British hub for vintage-motorcycle and custom-car events, plans to open its first U.S. complex in downtown Orlando within a year.

Owners of the Ace brand, with its “petrol and speed” cult following, have signed a long-term lease for acreage and several industrial buildings facing Interstate 4 at Livingston Street, next to the downtown Lynx and SunRail stations.

I think it will be an iconic, symbolic destination,” said Mark McKee, who bought the Ace Cafe rights for North America several years ago and since has staged auctions and events with celebrities, including Jay Leno and Billy Joel.

Initial plans call for a restaurant and bar, a shop for Ace Cafe’s Rockers merchandise

and a motorcycle dealership, which would likely specialize in European brands. Ace might build a motorcycle museum and repair shop later

The London Ace Cafe draws thousands of motorcycle and car enthusiasts to its 400 annual events. The Orlando operation

would be larger, with 3 acres and more than 16,000 square feet of space

The new cafe would provide a meeting place for car and motorcycle fans, with surface parking for fans to show up in their rides and garage parking nearby. Events could include everything from Old Ford Night and Mini Cooper meetups to gatherings for motorcycle clubs.

Thomas Chatmon, executive director of the city’s Downtown Development Board, said the project is unusual for the central business district because it serves as a destination for both the general public and for fans of motorcycle, car and truck shows. In addition, he said, it will reuse an existing building. The H2O Church now meets there, and McKee said he is in discussions with church leaders

about accommodating them on the site.

of bringing an old building, the brick-clad 1926 Harry P. Leu Building, up to current

standards is rigorous but attainable, Chatmon said. Meetings that Ace executives have had so far with the city, before applying for necessary permits, have gone well, he added.

The flagship Ace Cafe in London operated from 1938 through 1969, attracting “cafe racers” who literally raced through city streets

to cafes that catered to the emerging American rock scene.

a Rocker Reunion for cafe devotees. Three years later, Wilsmore reopened the cafe, which has been featured in books, films and a BBC series. Last year, he was instrumental in opening an Ace Cafe in Beijing. The Orlando cafe would be world’s third.

Orlando stood out from about a dozen possible U.S. locations because of weather, international

and proximity to Daytona Beach, with its speedway and Bike Week crowds.

“It was between us and Las Vegas as we identified this site in October 2011,” said Bobby Palta, vice president with the CBRE brokerage in Orlando. “The lease negotiation was the hardest I’ve ever done. But 18 months later, we had a signed deal. In the end, Orlando won the day, and the Ace will be coming to downtown.”

Speaking by phone from the original Ace Cafe last week, Wilsmore said he and McKee, who lives in Kansas City, visited about 20 prospective sites in Orlando before choosing the spot on Livingston Street 18 months ago.

“Our agent had prepared a portfolio of properties. We jumped in a rather large vehicle. We would pull up to one and say ‘Keep driving.’ Pull up to another — ‘Keep driving,’ ” the Londoner said. “Once we got to this site, well, what we said would really be an expletive. It was spot-on — absolutely bang-on.”

Walking through the high-ceilinged building where the H2O Church now meets, McKee outlined plans for an industrial-style space with dining priced for repeat business instead of special occasions. He said his design team intends to restore an existing stage for concerts; build space for fundraisers by the 59 Club, which is billed as the largest motorcycle club in the world; and create offices for Ace Cafe North America. He could not say how much the company plans to invest in a renovation.

“We purposefully stayed away from International Drive because we wanted urban buildings to fit with the Ace brand,” said McKee, a former restaurateur and franchise developer.