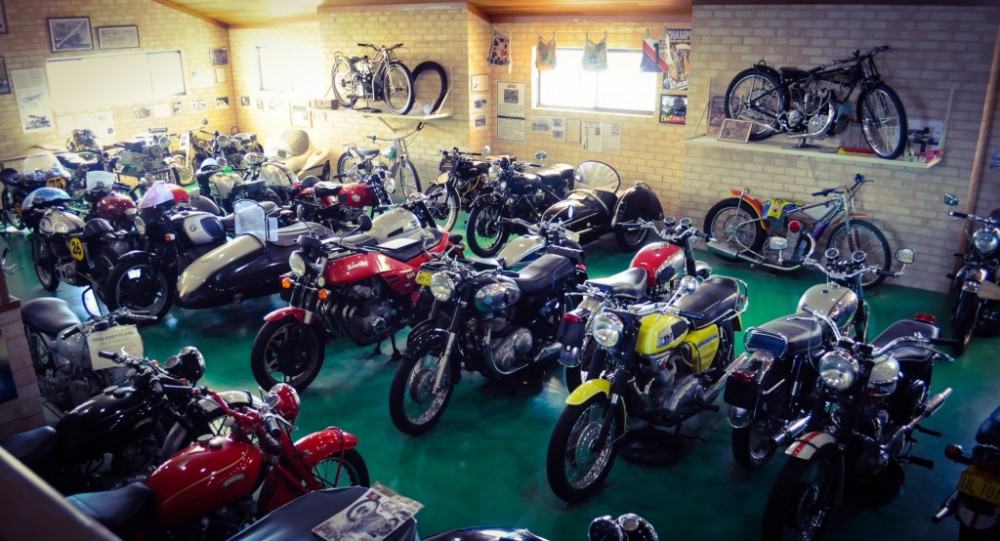 Well, just as you think there cant be anything else out there that will make my eyes open wide, my mouth hit the floor and just stand there trembling, but there most definatly is a really cool Museum that I hope to visit sometime, I used to live in Australia and loved the whole place, the food, the weather, the roads , the people and their passion for automotive collections.

Now if you ever get to Jurien Bay, which is about 2 hours North of Perth, then go and see Ian Boyd, as he has the largest Private collection of Vincent’s in the World. 46 in total, Holy Moly, I mean these bikes were built from 1928 up to 1955 When peter Vincent built the first model when the Ford had only just bought out the Model A.

And to see HRD’s- wow rare indeed, Howard Raymond Davies is where the Monogram derives from and to see these rare thoroughbreds is a treat indeed. Also Peter Vincent the Pioneer of these motorcycles rode his own bike to Victory at the 1925 TT at the Isle of man, stamping some authority in the 2 wheeled manufactures.

Collectively Ian’s museum has a net worth of over $5 million and will only get higher as these machines gain in value every year.

There’s not many people who wake up every day and eat breakfast overlooking a huge array of vintage motorbikes and vehicles. Former cray fisherman Ian Boyd built his house to accommodate his enormous collection, nearly 85 in total, and it truly is a sight to see so many vintage motorbikes lining up side by side.

Ian is a well-known character in Jurien Bay and opens up his home to bike enthusiasts from around Australia. He doesn’t advertise, it’s just word of mouth which brings people to his door.

“I love it, I am a people person and these motor enthusiasts are on the same wavelength as me. Now I’m retired it’s a great way to pass the time of day, just swapping stories,” he says.

“Most of these bikes were built between 1936 to 1955 and they are all British Vincent bikes. My favourite one used to be owned by a Siam prince who also raced cars. I reckon 800 people every year come and see my collection and I get them to sign my visitors book.”

Ian arrived in the town in 1985. He is passionate about motorbikes, there’s even an engine on his kitchen table. It’s a project he’s been trying to repair for months.

“I just cook around it,” he laughs.

“This is a great town, the beaches are safe, everyone is so friendly. Jurien Bay is paradise and I don’t want too many people knowing about this slice of paradise.”

WEST Australian Ian Boyd did not have any grand ambitions when he decided to start a motorcycle collection. He didn’t even consciously decide to focus his efforts on Vincent motorcycles. His collection started with one Vincent and, well, one thing led to another.

That was 29 years ago, when Ian was a cray-fisherman pondering how to keep busy in his retirement. He has since amassed such an extraordinary collection of Vincent motorcycles that it is regularly referred to as the best in the world.

And it’s difficult to argue with that assertion. Of all the models built by the revolutionary but sadly short-lived British high-performance motorcycle manufacturer, Ian owns at least one of every model — except one. The ultra rare White Shadow has so far eluded Ian’s reach. Only 15 White Shadows were made, and their rarity and collectability were on show last year when a White Shadow (originally painted red, on special order) sold in the USA for $434,000. 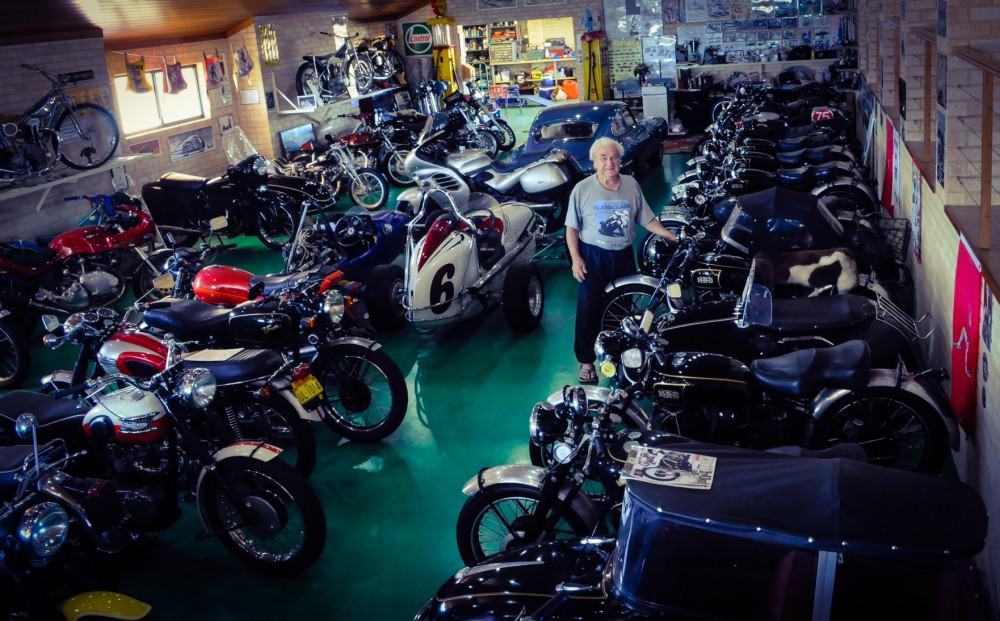 Not that anyone visiting Ian’s custom-built bike display showroom, under the main roof of his home north of Perth, is likely to complain. For the most part, visitors are gob-smacked.

Most bike collectors would give their left arm (and probably part of their right) to have just one Vincent in the shed. Ian has 39. And perhaps even more extraordinary is that you could remove all of the Vincents from Ian’s collection, and you’d still be left with a classic European bike stable to die for. (I’d been ogling the Vincents for a good 15 minutes or so before I noticed the Manx Norton — although I had noticed the 1970 E-type Jaguar).

But it’s the Vincents that steal the show. From a 1935/36 HRD TTR works bike through to Black Shadows and a Black Lightning, and on to a late 1990s RTV 1200 re-creation, Ian’s bikes tell the Vincent story from pre-birth to stardom, and then from financial oblivion to attempted reincarnation. 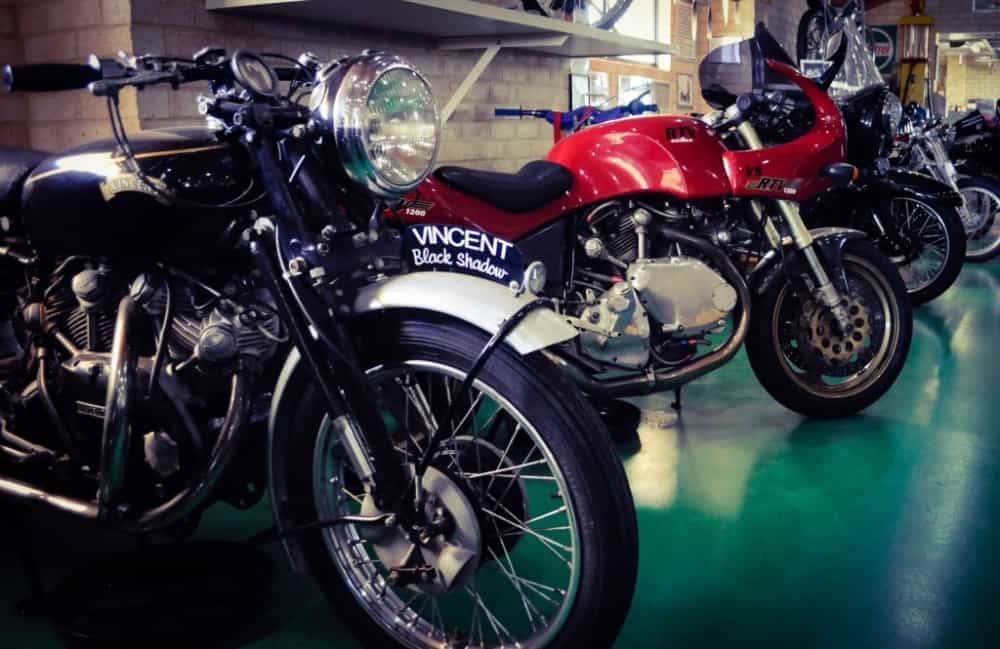 CAPTION: It would be difficult to name the most famous of Vincent’s bikes because almost all of them were extraordinary and all have become collectable classics. But the Black Shadow, launched in 1948 and capable of 125mph, is a star. It was, at the time, the fastest motorcycle in the world. Note the air-cooled twin front brakes (drums on both sides of the wheel) and the unmistakeable Vincent V-twin engine. All the Black Shadows supposedly had black engines — although this one of Ian’s does not. “They were short on money by this stage, and couldn’t afford the paint,” he told us. Alongside the Black Shadow is an RTV1200; an Australian effort from the late 1990s intended to recreate the Vincent by blending that great old-motor styling and best-available technology for chassis, suspension and aerodynamics. The bike worked, but the business venture didn’t. Ian’s is one of only a handful that were made before the whole idea went belly-up.

For the uninitiated,  the Vincent motorcycle story is a British story — but it’s one with a strong Australian connection.

But first, let’s back up a little.

The first Vincents wore a badge that read ‘Vincent-HRD’, with the ‘HRD’ prominent and the ‘Vincent’ under-stated.

HRD were the initials of Howard Raymond Davies, a British soldier who survived being shot down and taken prisoner of war in World War One and who went on to design and sell high performance motorcycles under the HRD name.

His bikes were mostly powered by JAP engines and were successful on the racetrack. (For the record, JAP engines are not from Japan. JAP was a very English firm created in the early 1900s by a chap named John Alfred Prestwich who used his initials to name his business, as was the practice in those days.)

CAPTION: The Black Lightning was a lightweight sports version of the Black Shadow. It weighed 170kg. The folks at Vincent were cutting edge in many areas of technology, but never fell for those new-fangled telescopic forks that other manufacturers got into.

The economics did not work out for HRD and Mr H.R.Davies, and the HRD name changed hands a couple of times, ending with another Brit by the name of Phil Vincent. Now, Phil wasn’t short of a quid — his family had money from Argentinian cattle ranches, as one did — and had already built a bike of his own. He’d also designed and registered a patent for a cantilever rear suspension set-up.

But he saw the economic sense in continuing to use the HRD name, since it had established significant racetrack credibility. Phil used the name Vincent-HRD from 1928 through to 1950, then changed it to ‘The Vincent’ — mostly because the company’s marketing effort was aimed at America, and ‘HRD’ was seen to be too similar to Harley-Davidson’s ‘HD’. 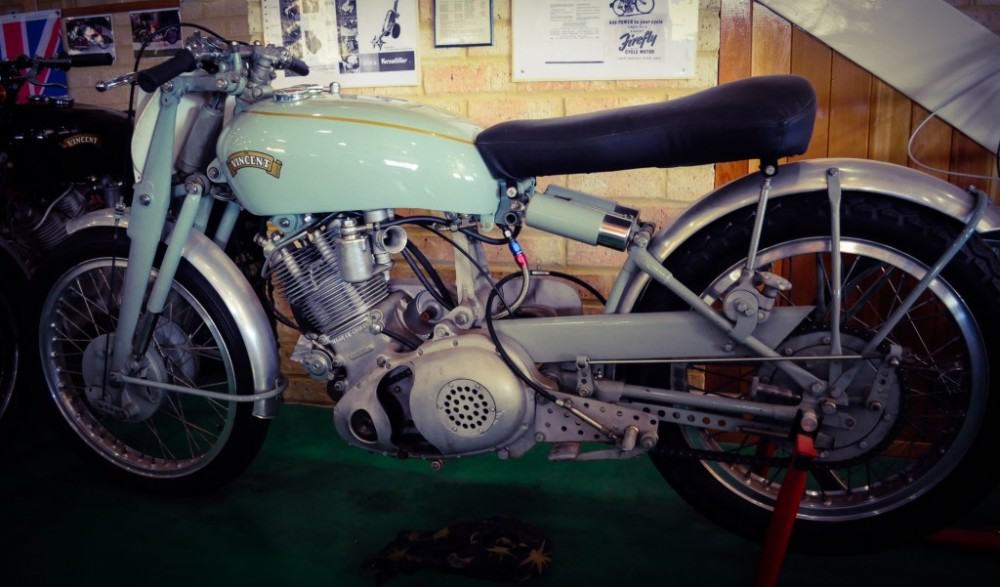 CAPTION: The 500cc Vincent Grey Flash is generally known as a limited-edition race bike from 1950. Only 32 were made and, of those, just three were built to be road-going. This bike of Ian’s is one of those three and was sold new in Argentina. Note the cantilever rear suspension, a trademark of Vincent motorcycles. Company founder Phil Vincent patented the cantilever design in 1928, at age 20.

The Australian connection to the Vincent story comes from a brilliant Victorian engineer by the name of Phil Irving. Phil had a motorcycle workshop in Ballarat in the late 1920s but, when the Great Depression forced him out of business he looked further afield for opportunities. A rather unusual opportunity came along in 1930 when he found himself being the mechanic and pillion on the back of a 600cc side-valve Vincent-HRD, undertaking a UK-to-Australia-and-back promotional ride. 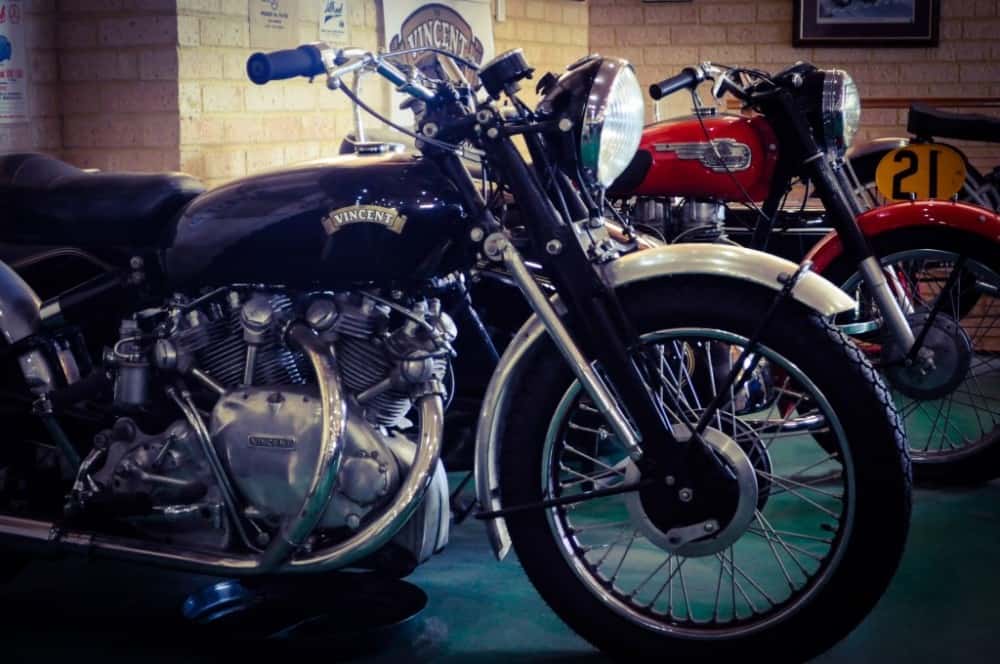 CAPTION: The Rapide was Vincent’s first 1000cc V-twin, literally made by sandwiching two 500cc singles together. Parts from the 500 and 1000 are interchangeable. The Rapide was a revelation, and catapulted Vincent beyond 100mph and into the realm of superbikes.

That gig got Aussie-Phil Irving to the UK, and also made him visible to Brit-Phil Vincent. One thing led to another and, before long, Aussie-Phil and Brit-Phil had become great mates, and Aussie-Phil found himself on Brit-Phil’s payroll. It was a successful pairing. In 1934, Aussie-Phil designed an overhead valve 500cc engine which became the basis for The Vincent Meteor and, later, the more racy Comet 500. But a greater contribution was yet to come. In 1936, or so the story goes, Aussie-Phil noticed two Comet 500 engine drawings lying on a table. The drawings were coincidentally resting in a V-formation, looking all the world like a 1000cc V-twin.

Aussie-Phil and Brit-Phil agreed mating Comets was a grand idea, and so the 1000cc Vincent motor was born, in turn giving birth to the 45-horsepower 110mph Vincent Rapide. The Rapide evolved through multiple incarnations over the years including the legendary Black Shadow and the Shadow’s high-performance sports variant, the Black Lightning, which used aluminium in place of steel wherever possible and weighed in at a startling 170kg (compared with the Black Shadow’s 208kg). 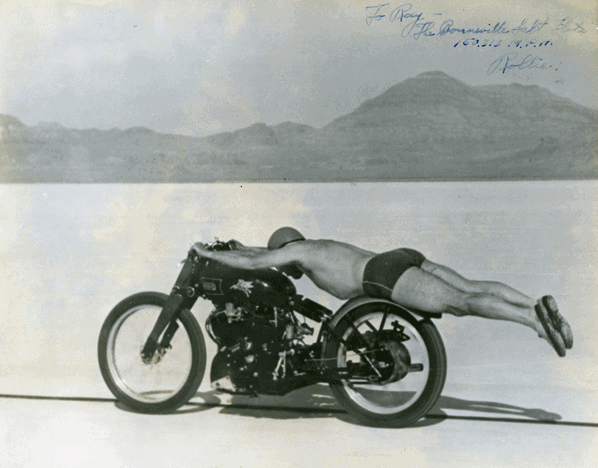 It is generally (but not universally) agreed that American racer Rolland Free was riding a Black Lightning in 1955 when, wearing not very much at all, he set a world record speed of 184.83mph at the Bonneville salt flats.

Amazingly, just as Rollie Free and that great photo were making Vincent a household name across the world, the end was nigh. Late in 1955, Brit-Phil announced that Vincent’s bike-building days were over.

(Footnote: Aussie-Phil returned to Australia in 1949 and continued in the engine-design business. He was famously recruited by Aussie motoring legend Jack Brabham in 1963 to design a Formula One engine. Aussie-Phil did just that — a three-litre V8, supposedly with BSA Gold Star cam profiles — and Jack won the 1966 Formula One Driver’s Championship and the Manufacturers’ Championship using that engine. Phil died in 1992 at the age of 89.) 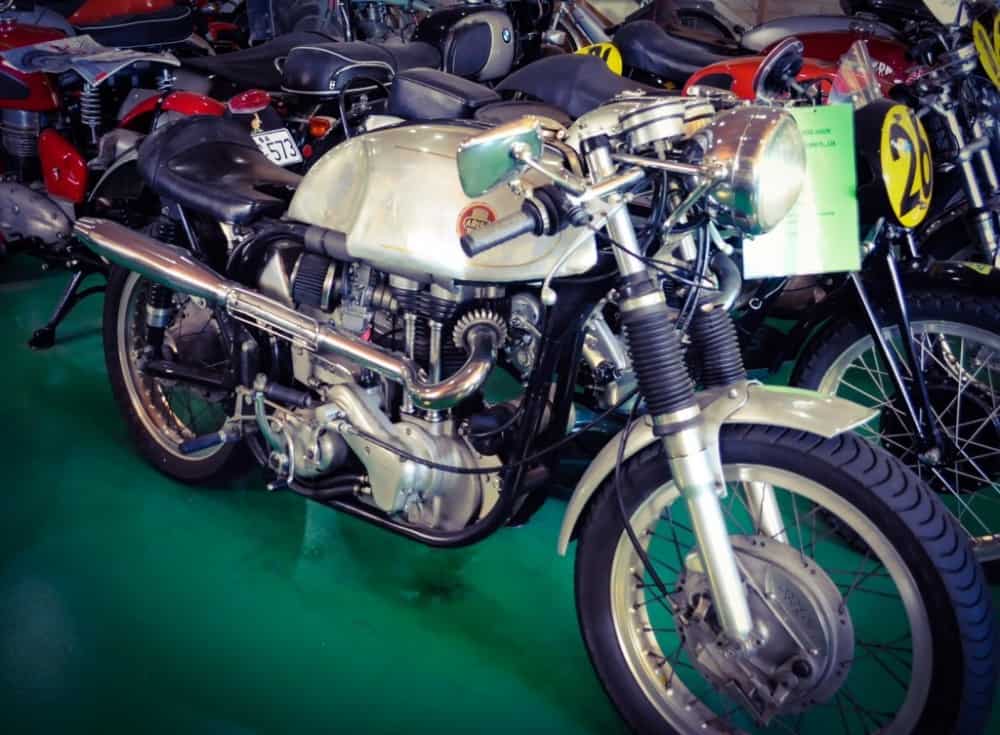 Below is a few more great bikes that I would love to own just one, brilliant effort and quick the nest egg for him and his family, although I sure hope he doesnt sell them all, just a great place to go and visit for sure.

So much Classic iron is a super rare find for many of these machine, so the opportunity to go and visit Ian would be such an entertaining experience to be honest. 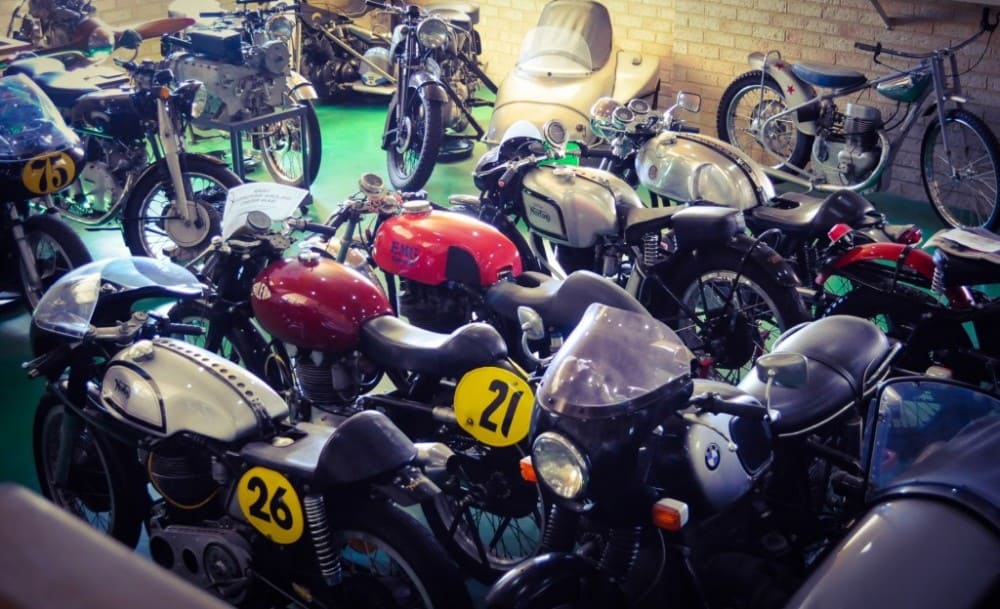 Just look at the great choices you could have to ride everyday, an Aladdin’s cave of awesomeness in every conceivable configuration. 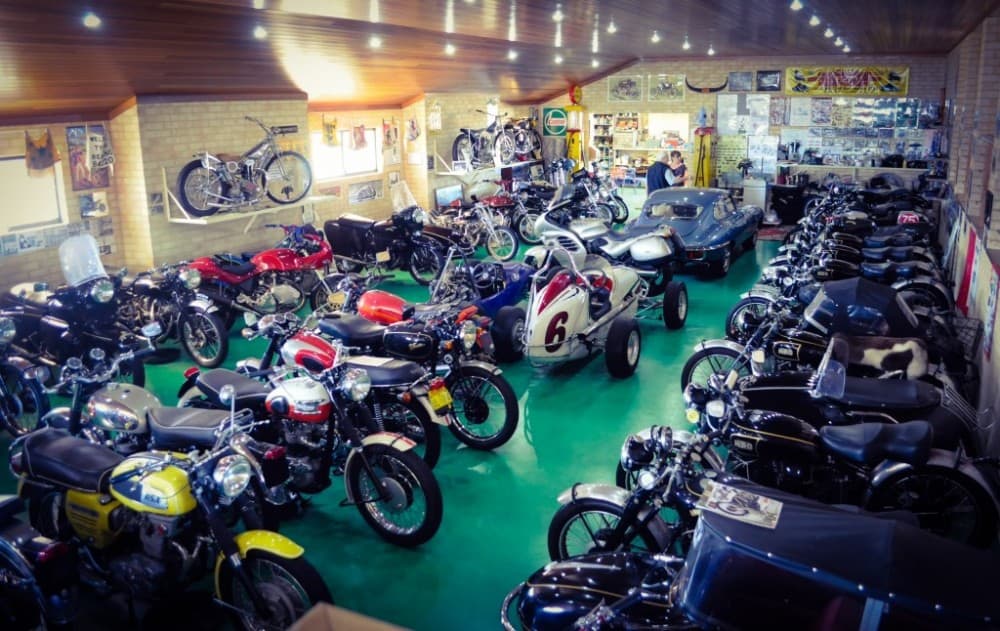 Even a sprinkling of cool Automobiles too, Love the Drop head Coupe as well as the 1/4 Midget Track car. 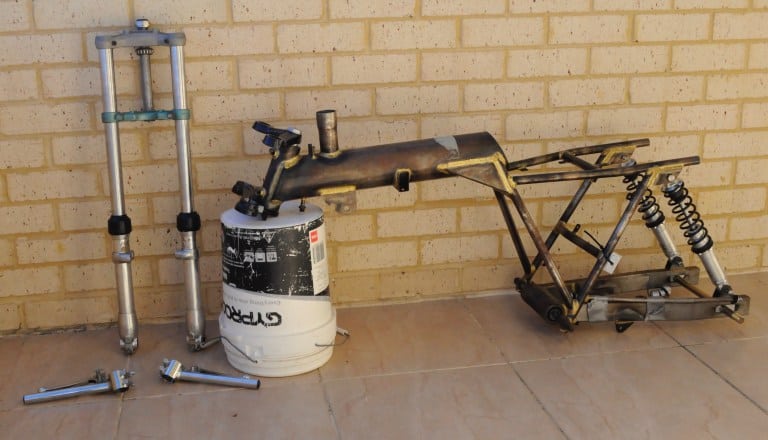 CAPTION: Ian might be a hoarder, not a trader, but sometimes he needs to shed something. This New Zealand McIntosh-built Egli frame with 35mm Ceriani forks and Works rear shocks has become excess to requirements and Ian is trying to find a new home for it. (You’ll need to bring $6,500 with you.) 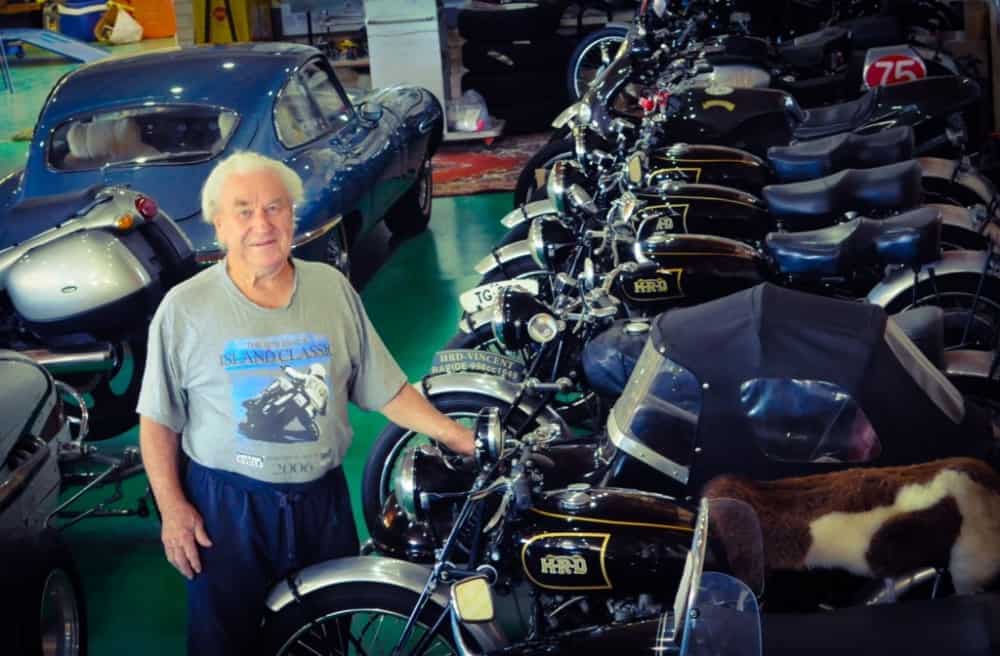