This is how the bike was originally and many a teenager in the UK would of been drooling to see this in the shop window, as I knew I was when I was a lad.

For its time, this was the bad boy to own if you wanted to be a “Boy Racer” and in 1978 I managed to purchase a Gold UK spec on and ended up getting caught by the police speeding and had to trade the bike in for a restricted 50cc moped and I was not happy I can tell you.

Mine was like this but I had club-man bars on mine, but my brother has the same model too. 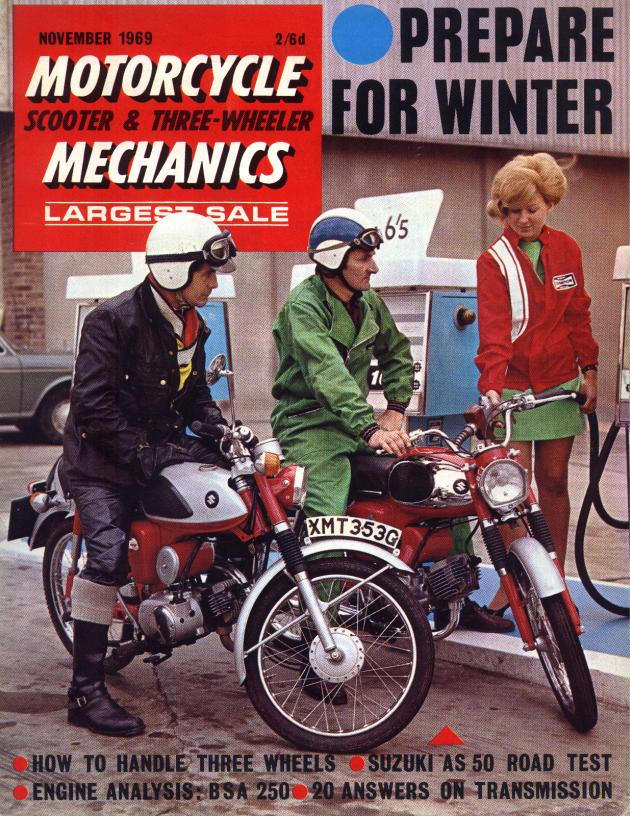 This was all the rage back then, but when I located the one I have now and sat on it, I could not believe how tiny these were and I used to buzz about flat out at over 60 MPH. 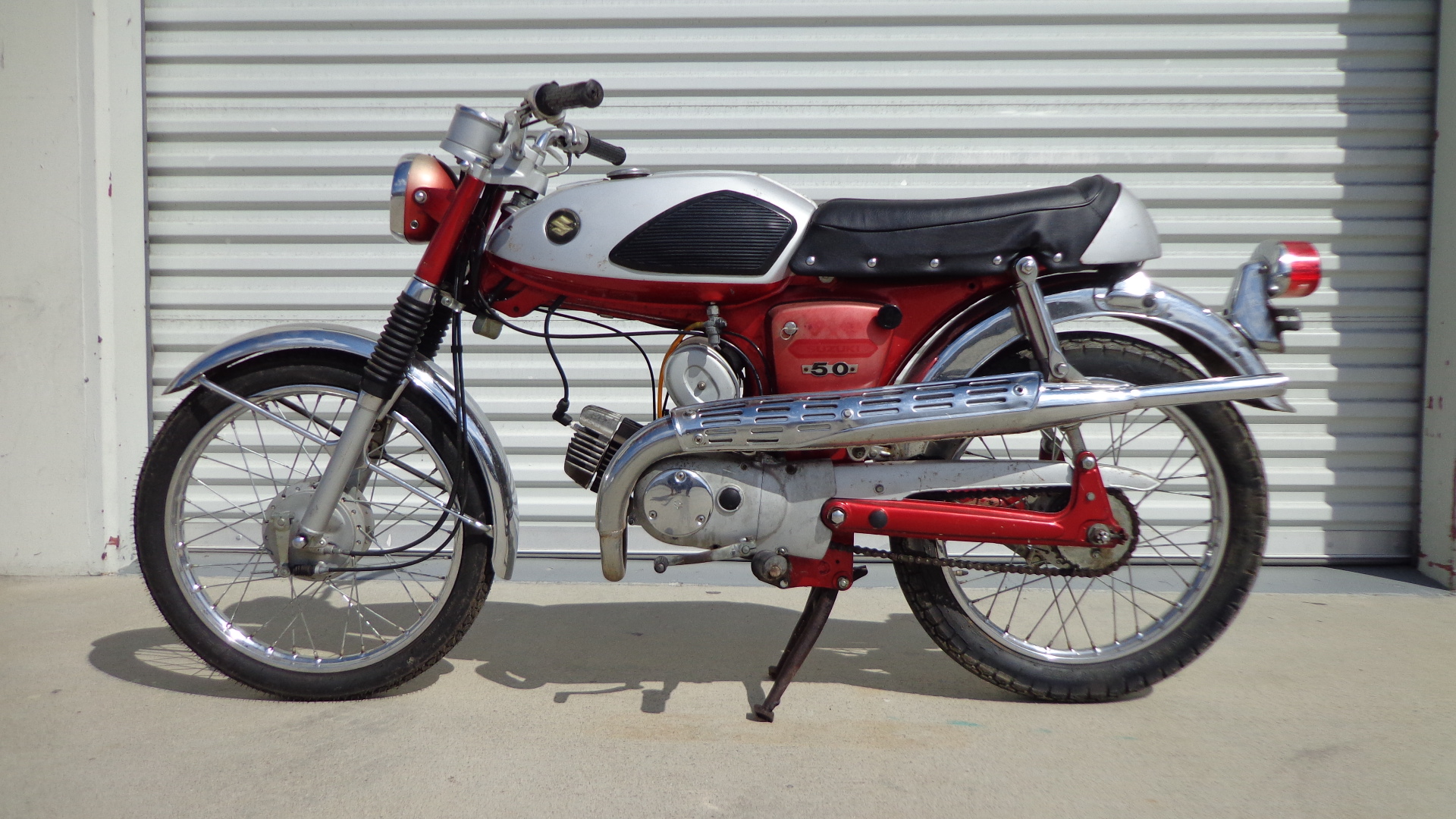 But this find was a fun one for me and I drove about 90 minutes out in California and picked the machine up, the fella said it sometimes would start but wouldn’t go into gear. 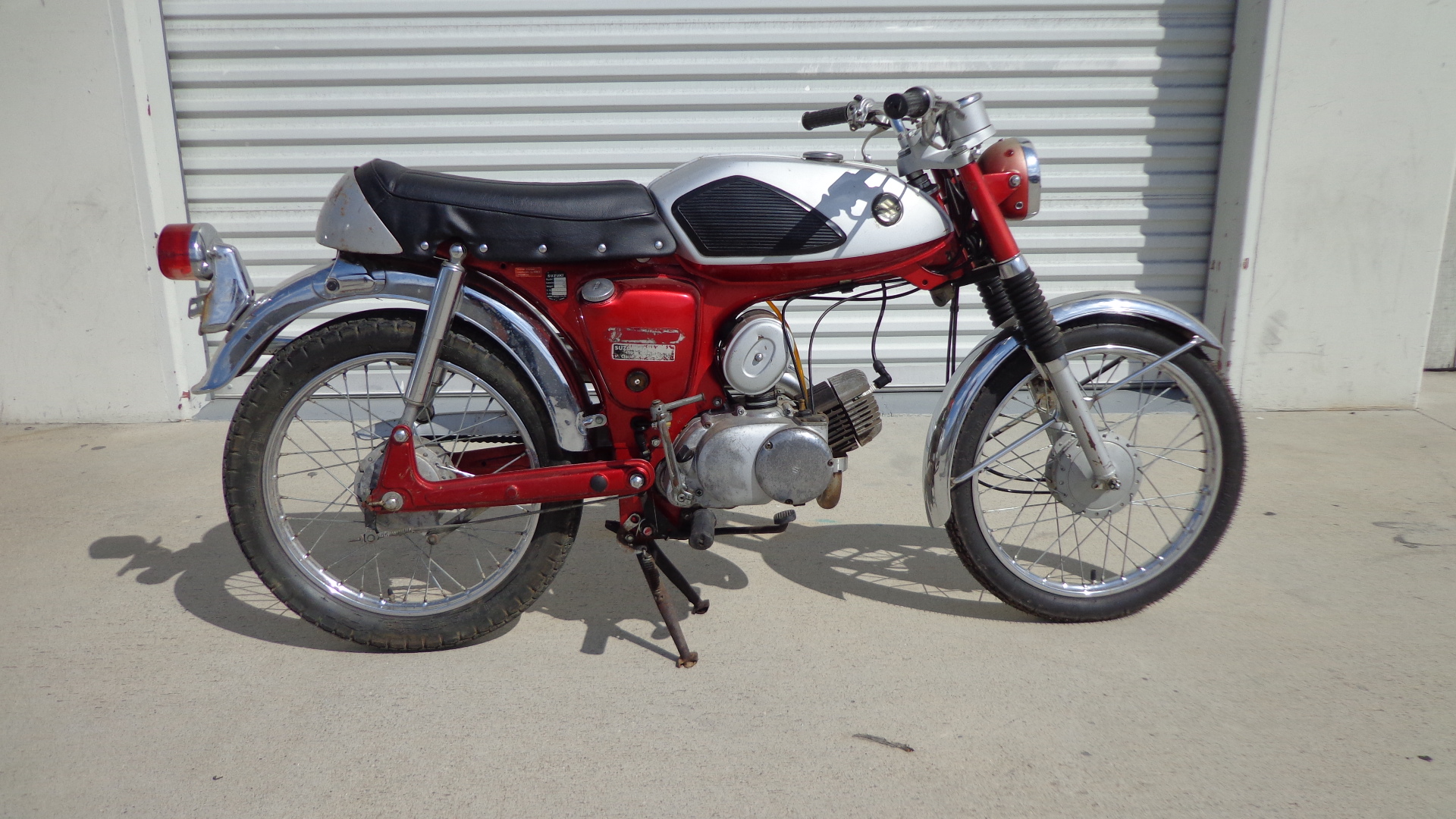 But I got it to run and let it idle fr sometime, then shut it off and put it in gear and pushed it a few feet and let the clutch out and she freed right up. 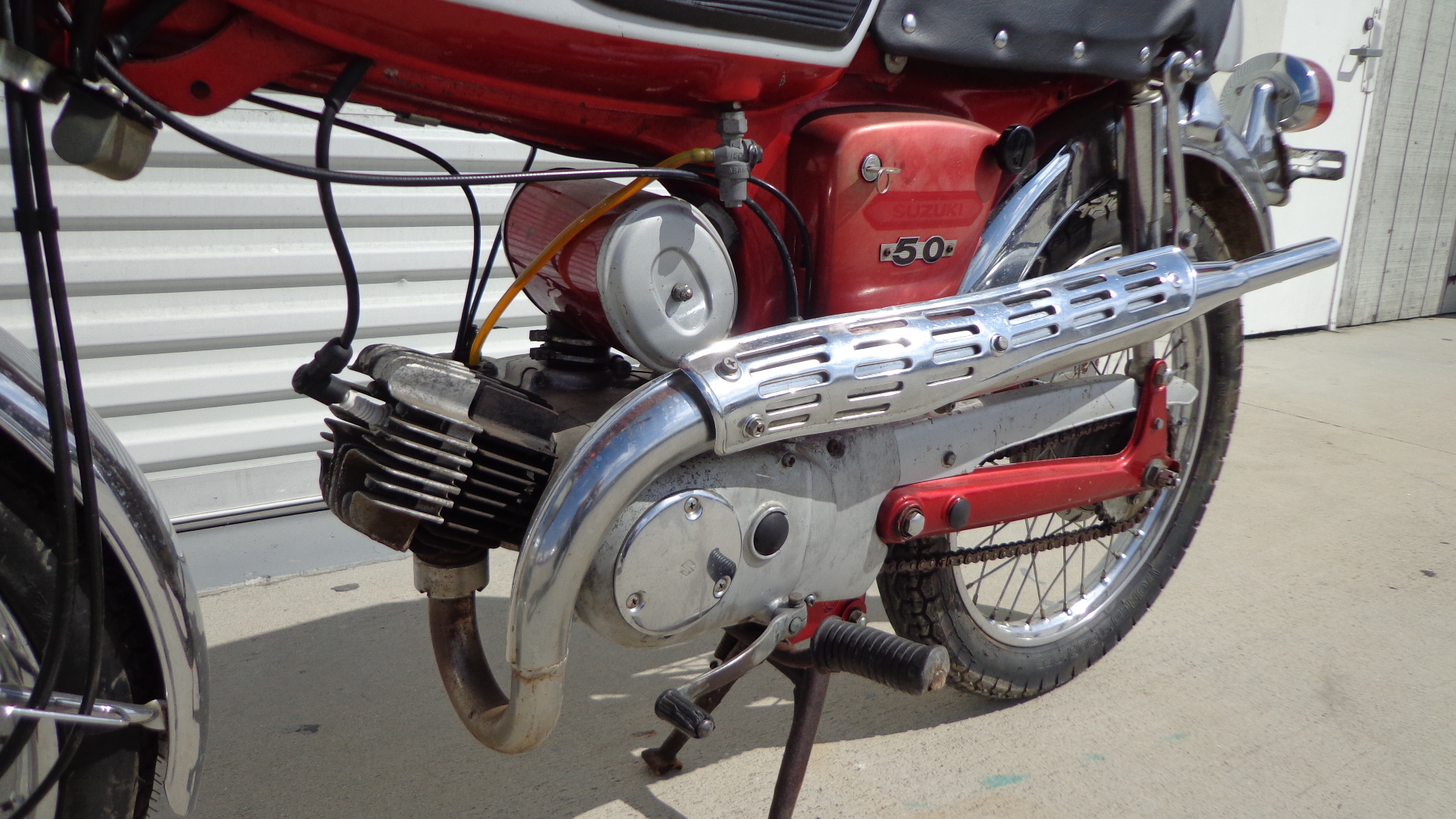 Now, she seems to be all there, I need a new petcock as someone JB Welded the thing and I cant turn it off at all, so will order one through a dealer in Japan and then try and track down an air filter and some new jets etc. 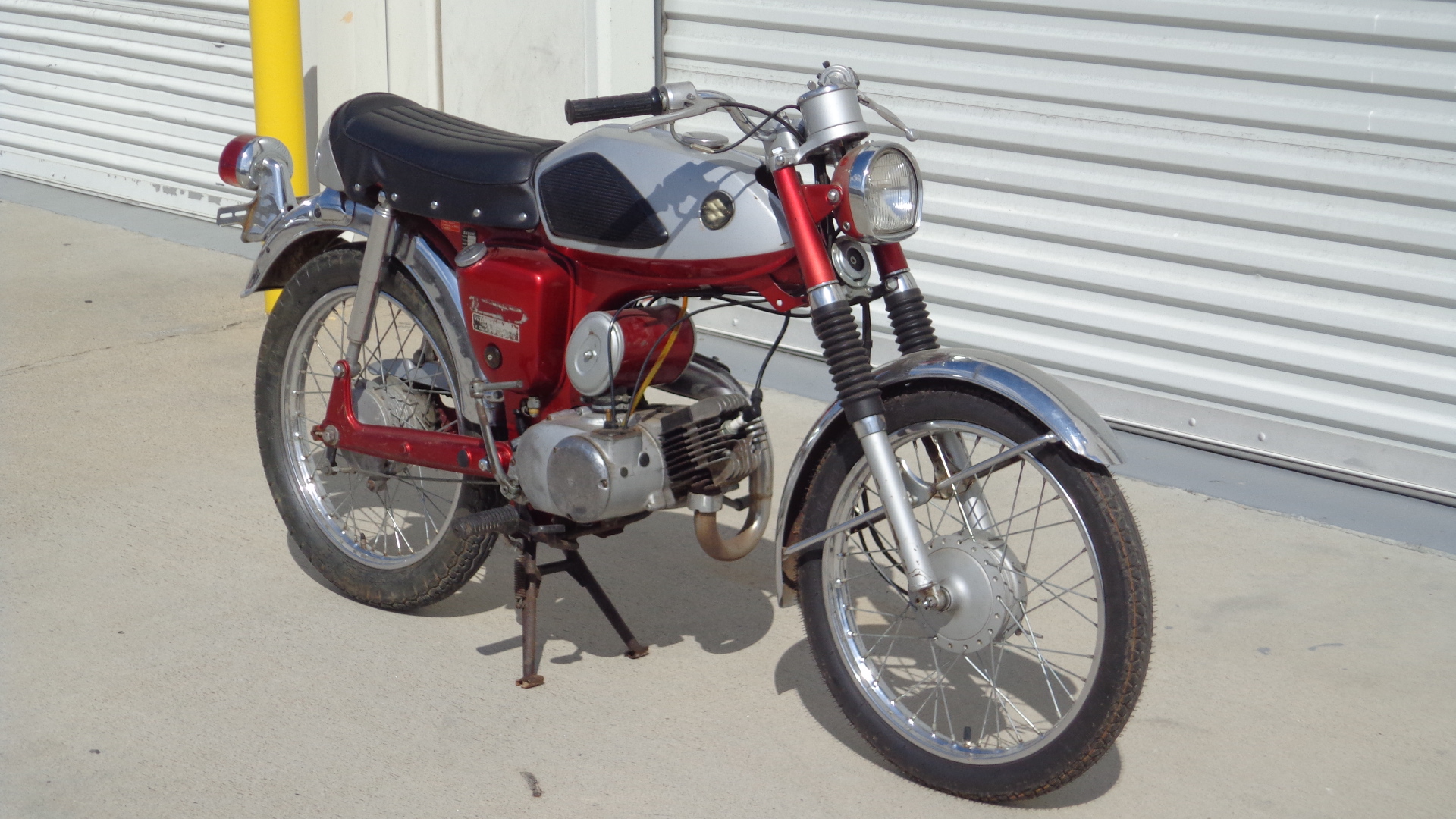 I may try and restore her later on, but right now I have too much work to do myself at the shop, but, as long as I can get a few parts for her and just store them, then things should be great. 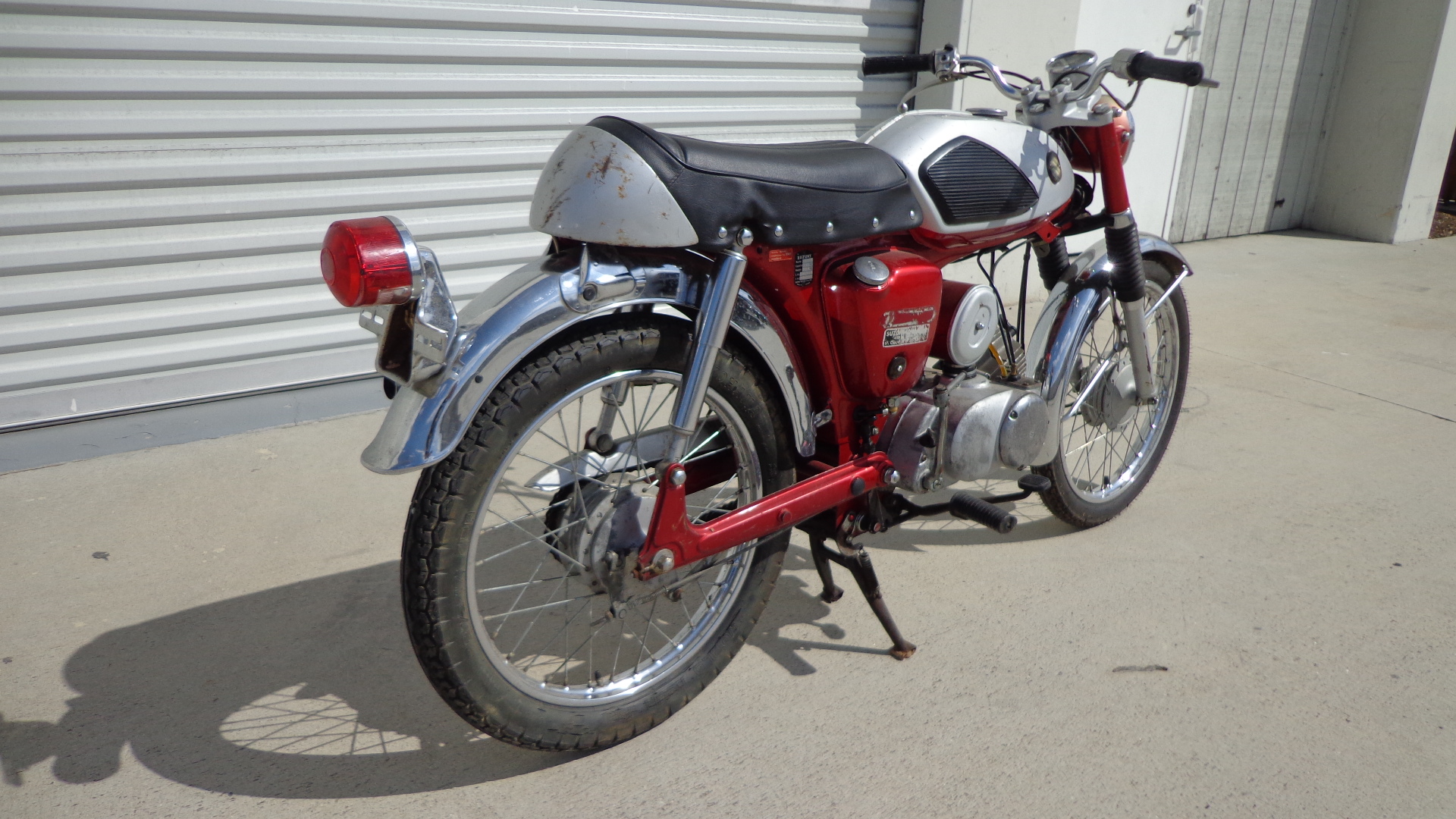 This is a fun machine and I am sure many people can relate to this era, especially back home in the UK as for us, these were the bikes to get and after this model the battle of the Japs began, with the AP50, the FS1E,The SS50 and the Fantic caballero. 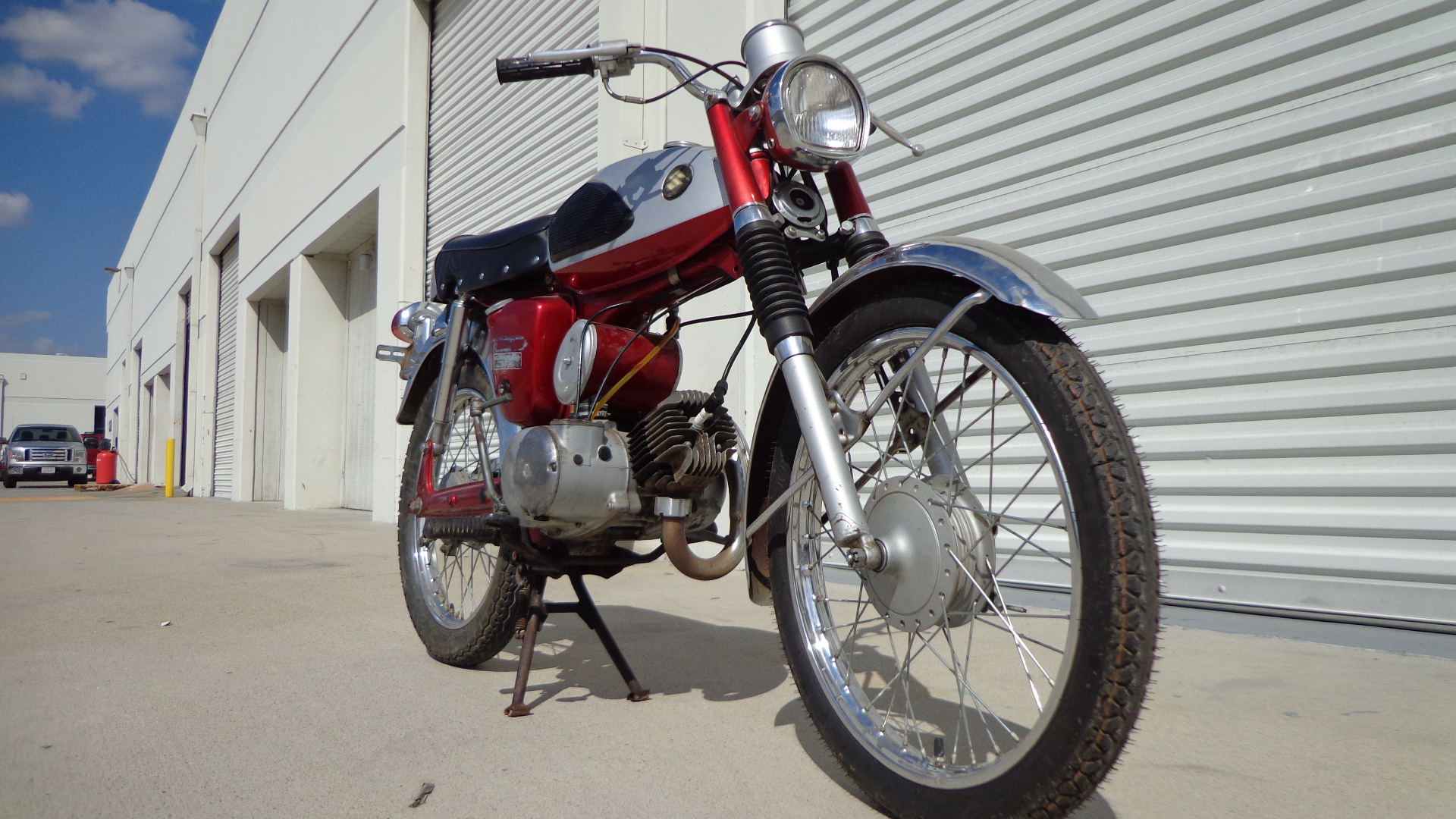 I am sure I will get many comments when I take this to the Drags as a Pitt bike. 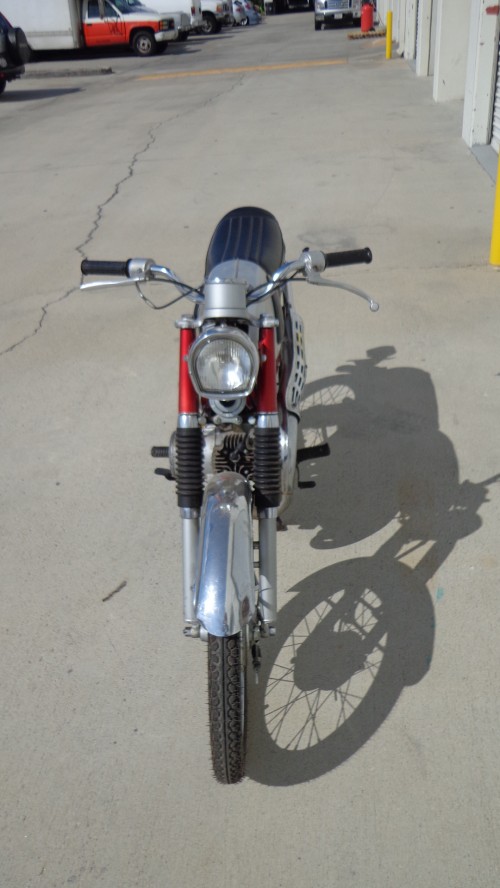 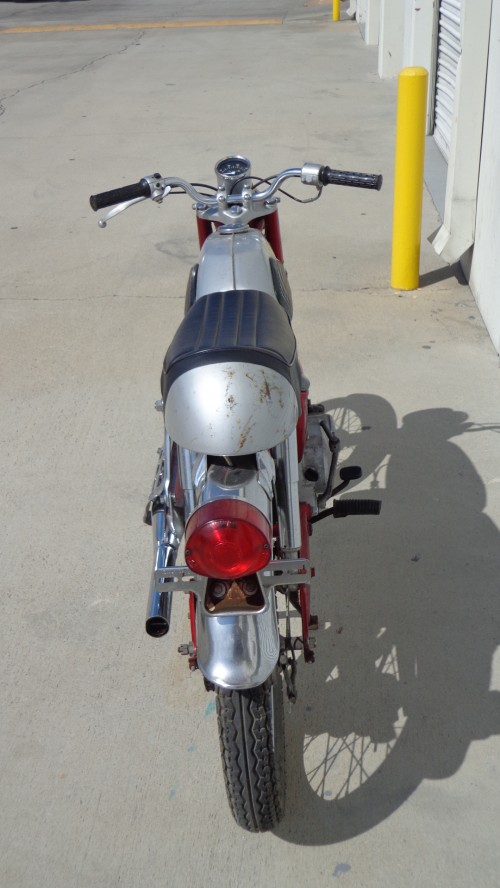 Just a little wear and tear but for over 40 years old, she is in great shape and all seems to be there on her still. 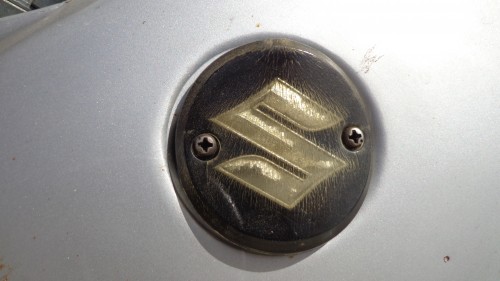 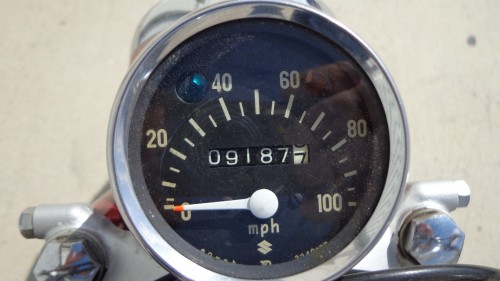 Original emblems are still screwed to the petrol tank and the milage I believe is a fair one as i did over that on my 50 back in 1978. 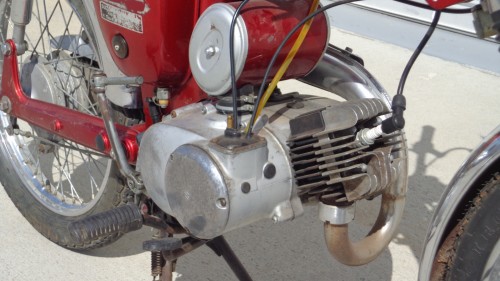 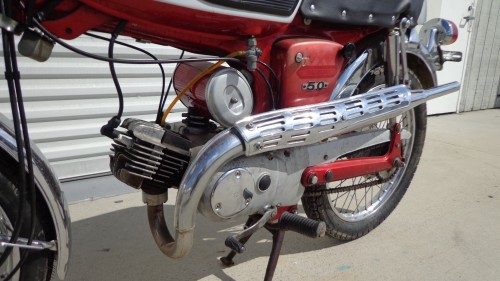 I am hoping I can locate the air filter for this, as it looks the same as the AP5o, so will hunt back home in the UK for anything as there was many of that model over there in the 70’s and 80’s. 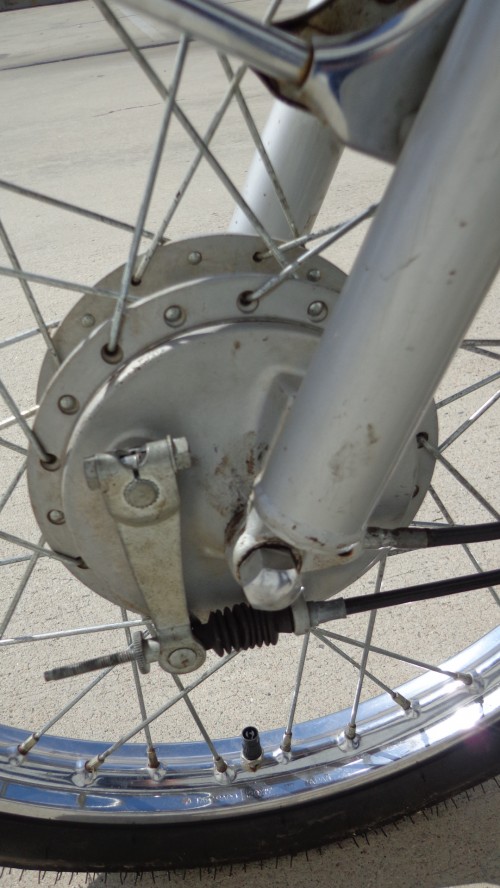 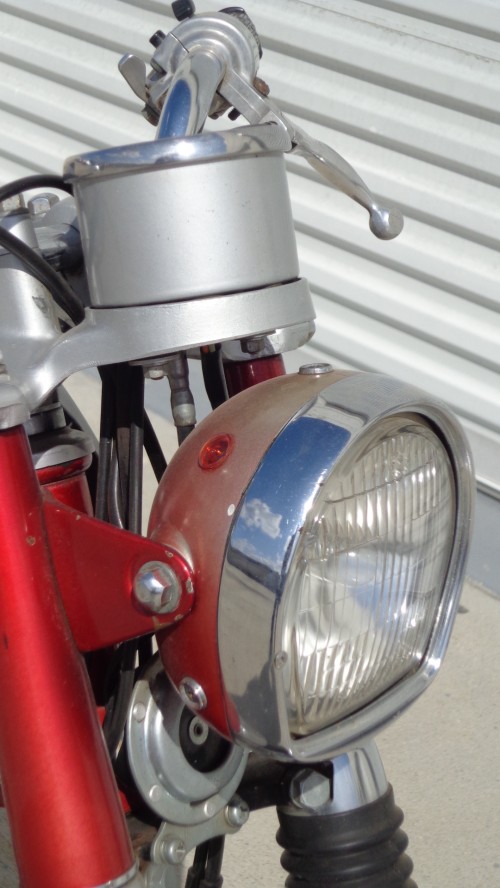 Dinky little drum front brake and at 60 MPH it took some stopping sometimes. 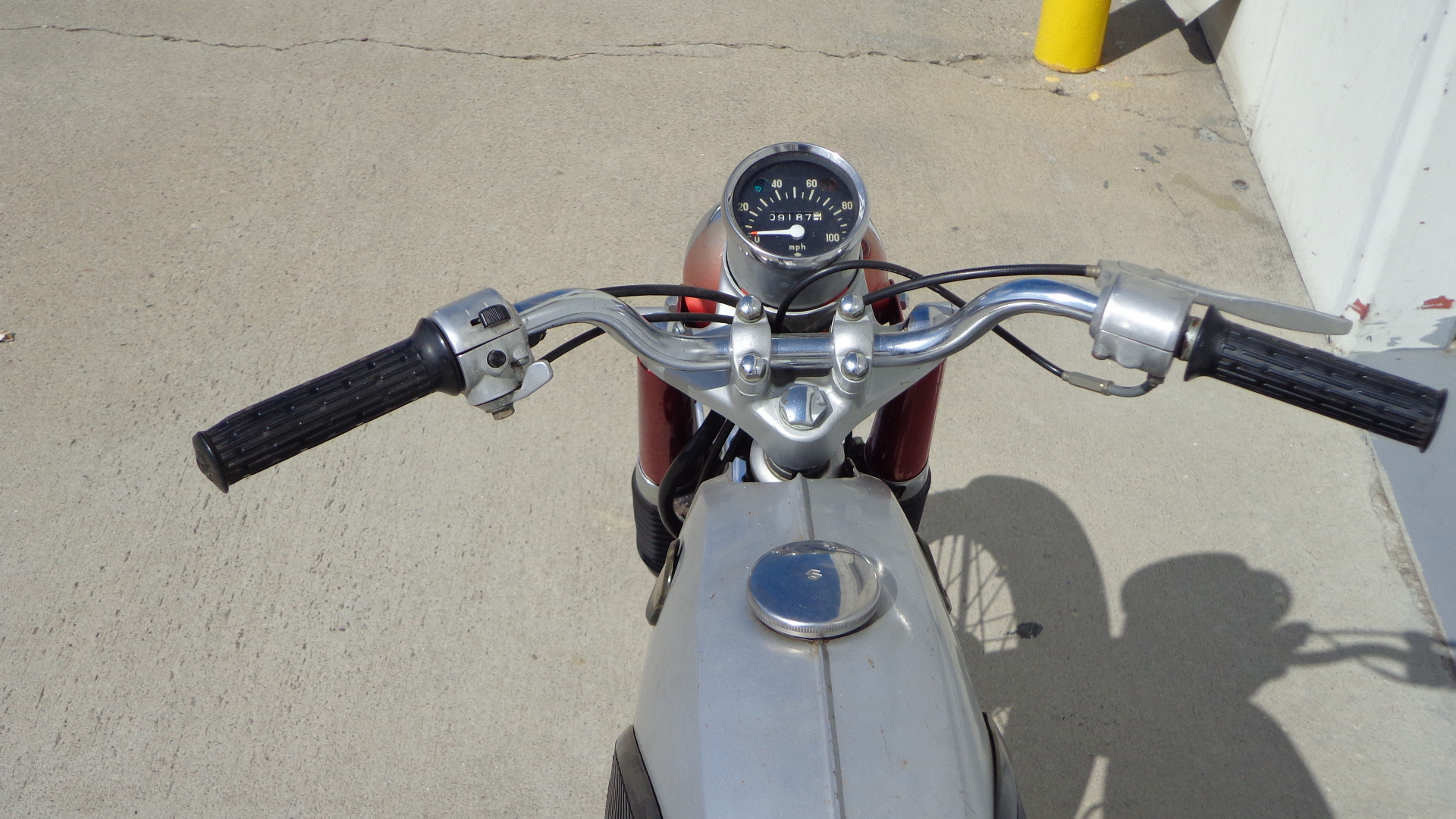 Yeah I know, doing the Ton on this was wishful thinking but a great landmark to look at on the clock as other bikes had 80 on them. 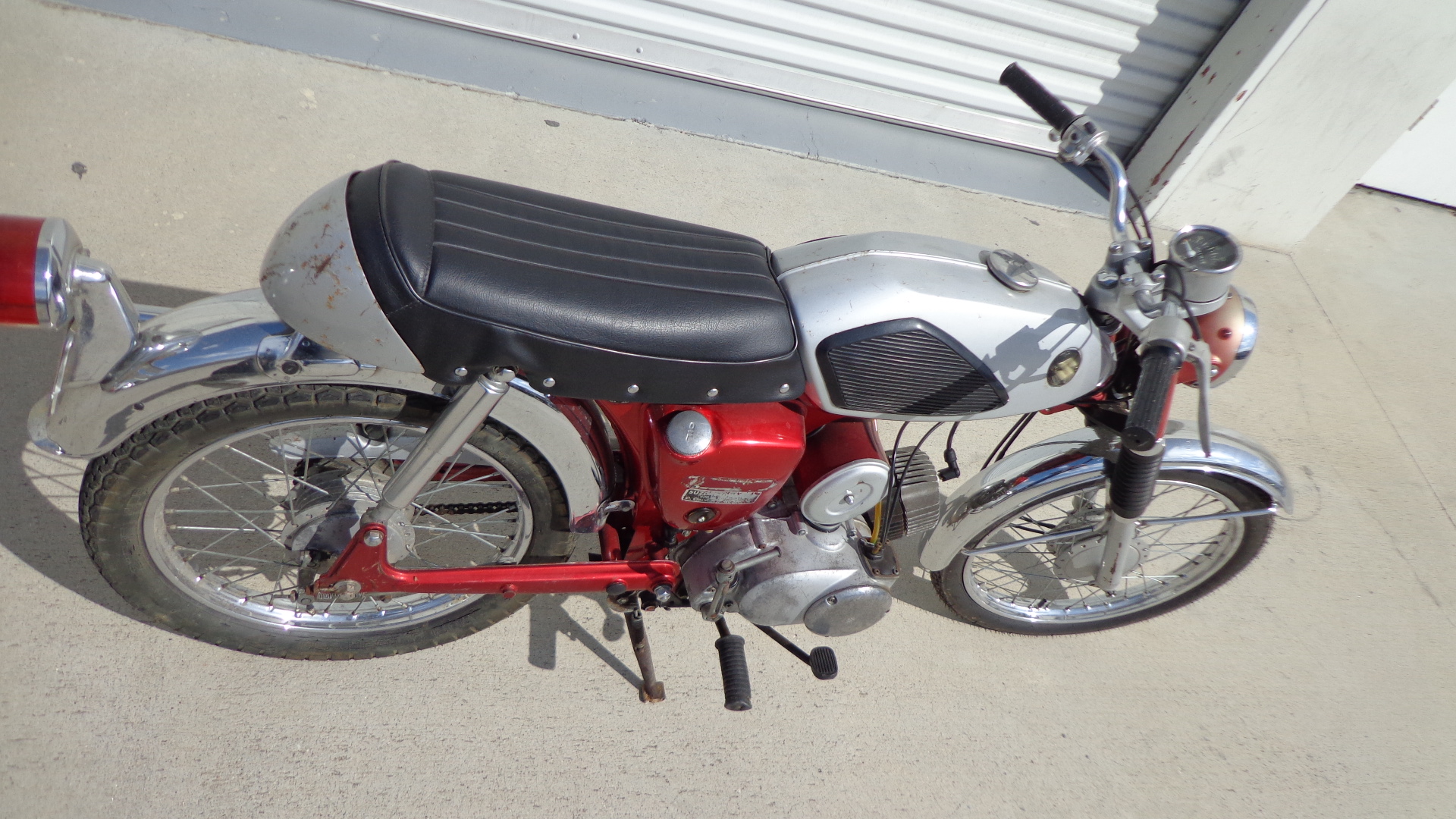 The bike was the first to have the little racing cowl as a stock option and the cafe scene was set for the little Nifty Fifties and that was when I came into it.

Below is some cool right ups on this bike and thought you may like to have a look and chuckle, but back then this was a big deal, I just laugh when I look at that magazine cover with 2 grown men filling up at the petrol station. its an awesome shot, would of loved to seem the wobble down the road after that photo was taken.

The write up says the fifty specs are glamorous to say the least !!!

All the specs for you to ponder at the 70’s powerhouse 50.

Yes, you can ride with clogs on too.

Ooh a 5 liter gas tank too

A FIVE liter gas tank too was a big deal for a little bike back then.

Some different colors and models for you to look at. 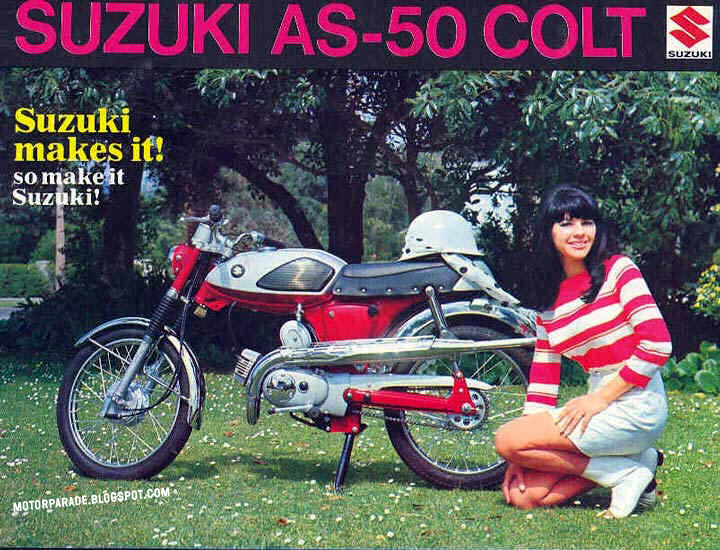 There she is in all her glory. I hope to maybe one day restore this thing unless someone offers me a good wedge for it and but that’s another story.