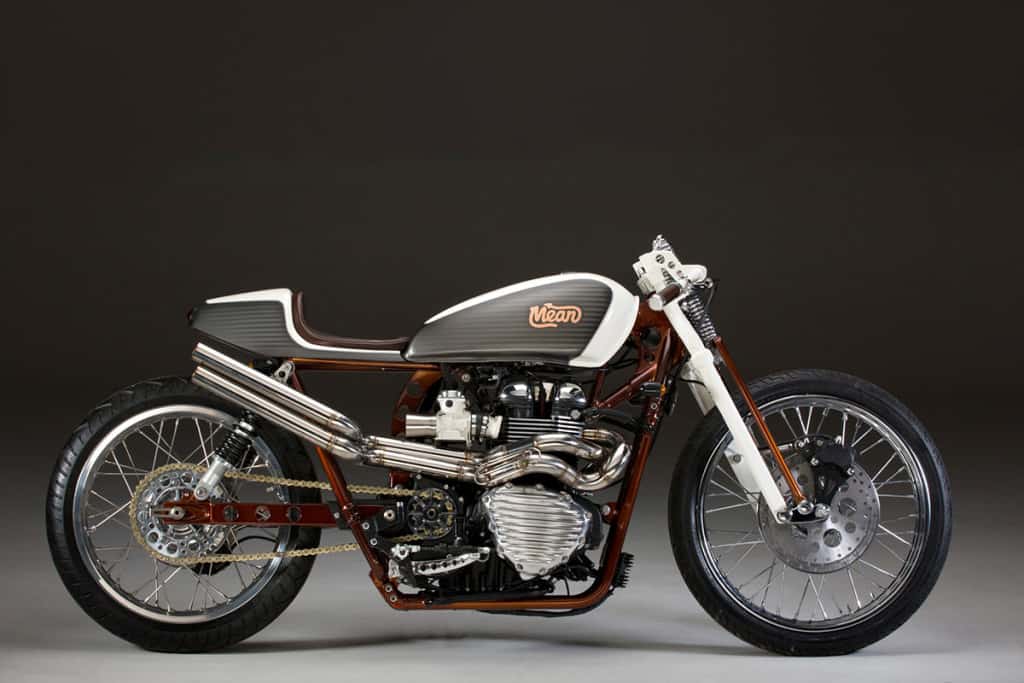 Sometimes there are things that just stop me in my tracks and, today is that reason, I saw this Triumph and just thought ” Woah! thats a bucket load of work and thought that has gone into this beast”. Named-  ” Rumour Monger”   Images by Manny Tamayo What a work of art, this is quintessentially the most I have seen altered on the Newer Trumpy’s and for those who are purists it is not up your alley but- just look at the time and the creation that has been developed.   Images by Manny Tamayo I knew this had to be a Bike that was built on the other side of the world, I lived in Australia for 4 years and saw so many cool bikes that were created from tiny workshop and this fella ” Wenley Andrews” is one of this Blokes and boy- What a killer job.   Images by Manny Tamayo Coming out of Perth, Andrew took a 2010 Bonneville with the Mag wheels etc and set about to change the whole look and style to this now iconic Motorcycle.   Images by Manny Tamayo I had toyed with the idea of fitting a Springer front end to my 2013 Thruxton but its lot of work and although i could do it, finding the bearings may of been a task that I really didn’t want to do by calling all the bearing and race manufacturers, so this guy really done his home work on the bike that he built from his shop named. ” Mean Machines”.   Images by Manny Tamayo The front end Springer is now  five inches shorter and to be honest, looks better for it, and sports a 21 inch front rim, but also what pretty cool about this machine is the way they have set up the Faux mechanical brake system, putting the master cylinder under the Petrol tank, and still being hydralic but actuated by a cable, very trick eh?  Images by Manny Tamayo The tank took some work to fit how he wanted to as he had to cut away the subframe but he managed to pull the job off by redesigning the frame a little and then calling Ikon and asking to have a set of custom length rear shocks to raise the arse a little and to be sure it sits very well indeed.  Images by Manny Tamayo This bike actually gives the styling of the infamous Board Track Racers of Yester Year and even though this is a 2010 model, its hard to guess at first glance what era this is from. Just look at the work involved on this Stainless Steel exhaust system, not only is it tight and clean, they actually removed the float bowl off this efi system and brought the headers in even tighter and then added a cool starter switch assembly above the unit.  Images by Manny Tamayo

Just so much work and the candy Root Beer Brown is something I love as that’s the color of one of the bikes I created last year, love the whole concept to be honest.

Below you can see more detail work and this time going with a different headlight bucket and unit that was taking from a Prima Vera Vespa Scooter and then fitted a Motogadget Speedometer, complete with an integrated M lock key less ignition, that is hidden with the Battery under the seat, this is as far out as most people would even dream of.   Images by Manny Tamayo Hand made bars too just gibe this a clean and sophisticated style that’s hard to pull off, well done lads, great job and I am sure that we are going to see many articles on this and all the other Motorcycle that they are creating, as well as Classic cars too.  Images by Manny Tamayo

A great builder that enjoys motorcycles and loves other people enjoy too.

Here is an earlier Video of the young Bloke when he worked in his garage and was worried that his mum would whoop his arse for playing with motorcycles.

A cool shot of it in the outback as it were.

Great to see and hope you liked looking at this as much as I did putting it on as a blog.