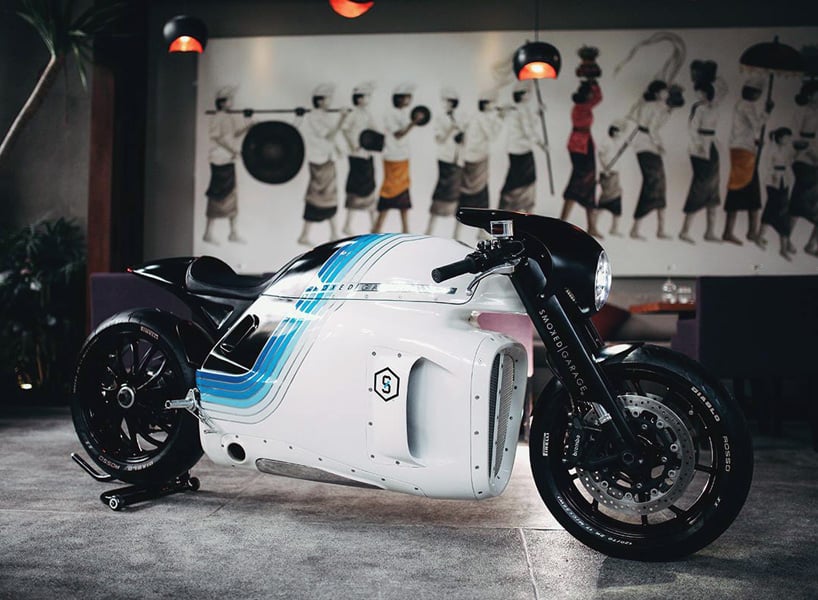 This creation is designed almost beyond practical function, but it’s not. This bike looks like it could contain a turbo fan jet engine and burn aircraft fuel, it doesn’t.
It looks forward heavy and maybe cumbersome for turns, it isn’t. 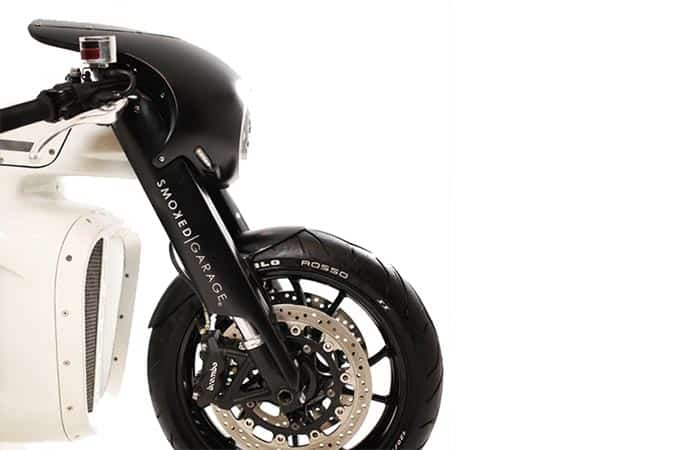 This bike looks like someone’s idea to test the land speed record at salt flats, it isn’t.
When you ride, this bike will not look like any other bike on the road anywhere near you, ever. 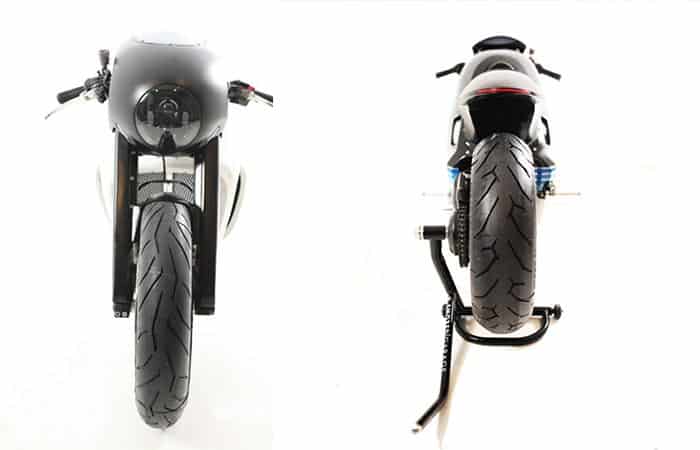 Inspired by the otherworldly lotus ‘C-01’ motorcycle concept, the triumph ‘ghost’ is an elegant build brought to life by indonesia-based workshop smoked garage. based on a 2005 triumph ‘speed triple’ bike, the ‘ghost’ now features a bespoke cooling system and frame geometry, housed in a full aluminium body. 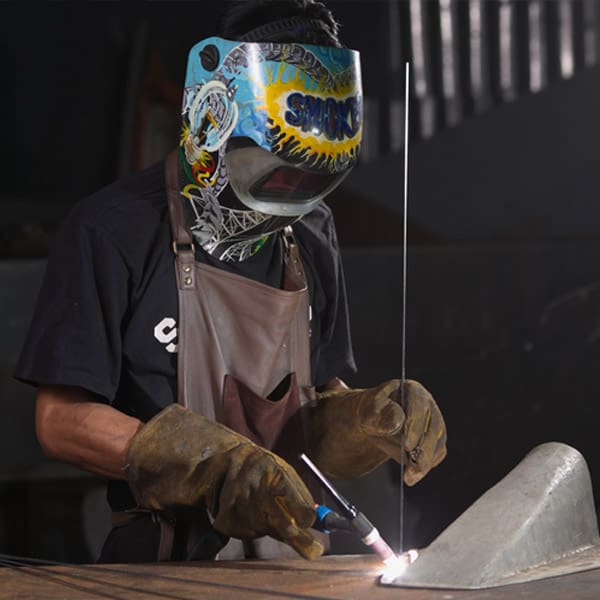 Once smoked garage had settled on the triumph as the donor bike, it didn’t waste any time stripping it back. as this was the garage’s second iteration of this futuristic bike, it was able to draw from previous experiences to improve upon the new build. it started by customizing the ‘speed triple’s’ frame and making new triple trees. it then assembled a new airbox and radiator, while adding a bespoke headlamp and custom fork sleeves to the front end.with the lightest result possible in mind, it then shaped the bodywork from five pieces of solid aluminum that join together with flush mounted bolts for an aeronautic aesthetic. smoked garage found cooling to be the biggest issue with its first bike, so it has revised the front grille and improved the scoops on the sides to draw-in more air around the engine. it also redesigned the mounting of the exhaust to help keep temperatures down. 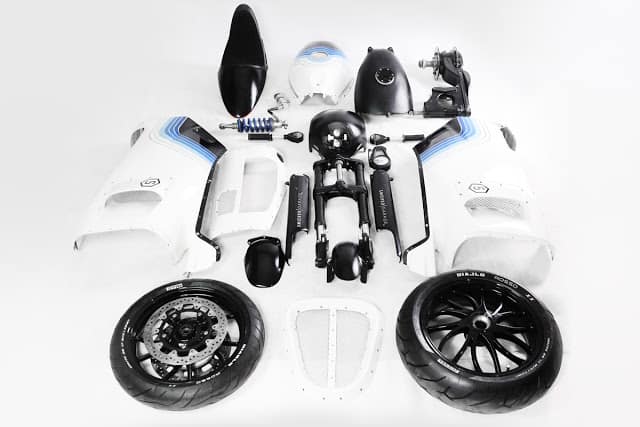 The ‘ghost’ features a custom tail with an integrated LED light, with a pair of clip on bars and rear-set-footpegs to position the rider well for opening the throttle on the straight and narrow. the final finishing touch of the custom triumph is its minimalist paintwork–smoked garage found its final design after sketching over 40 different concepts–and when the paint was applied, it knew the ‘ghost’ had finally been brought to life. 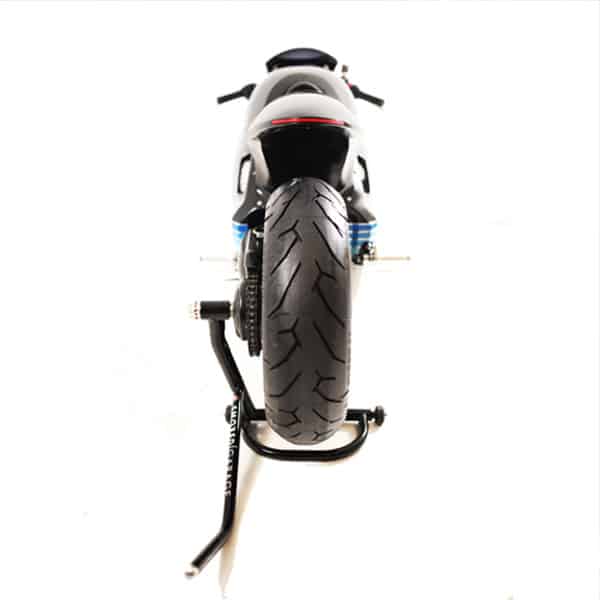 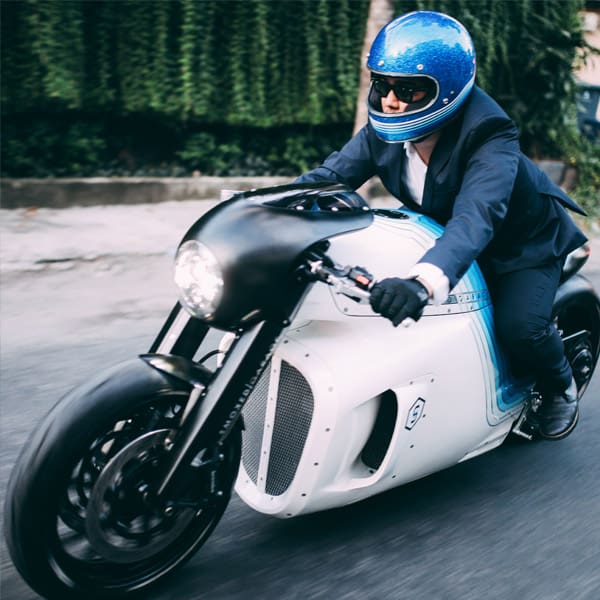 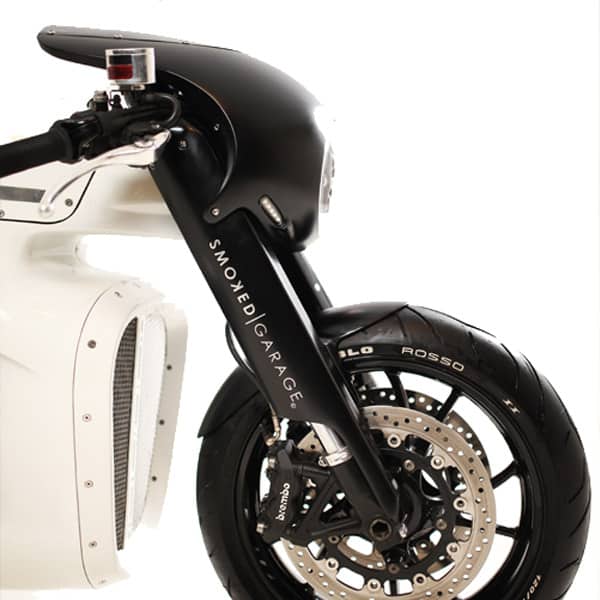 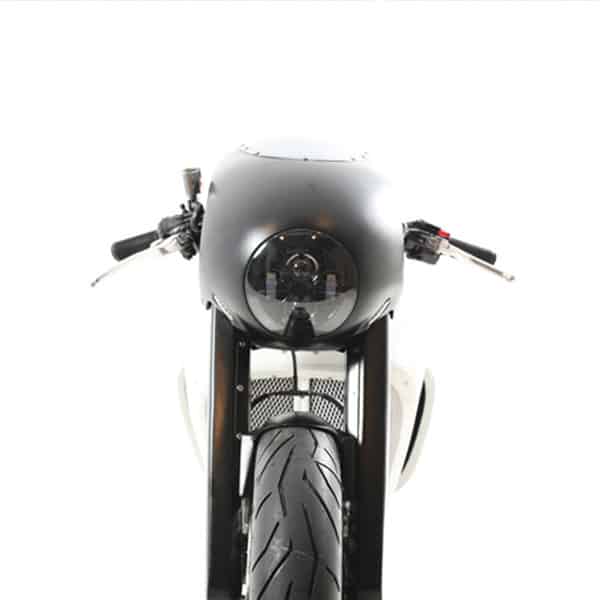 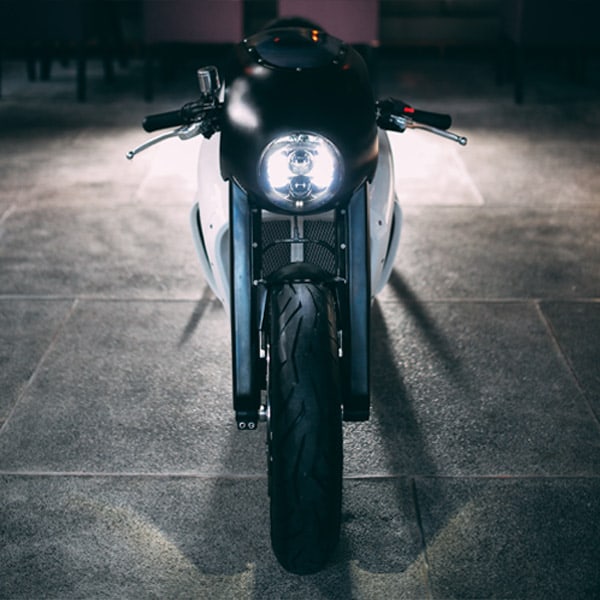 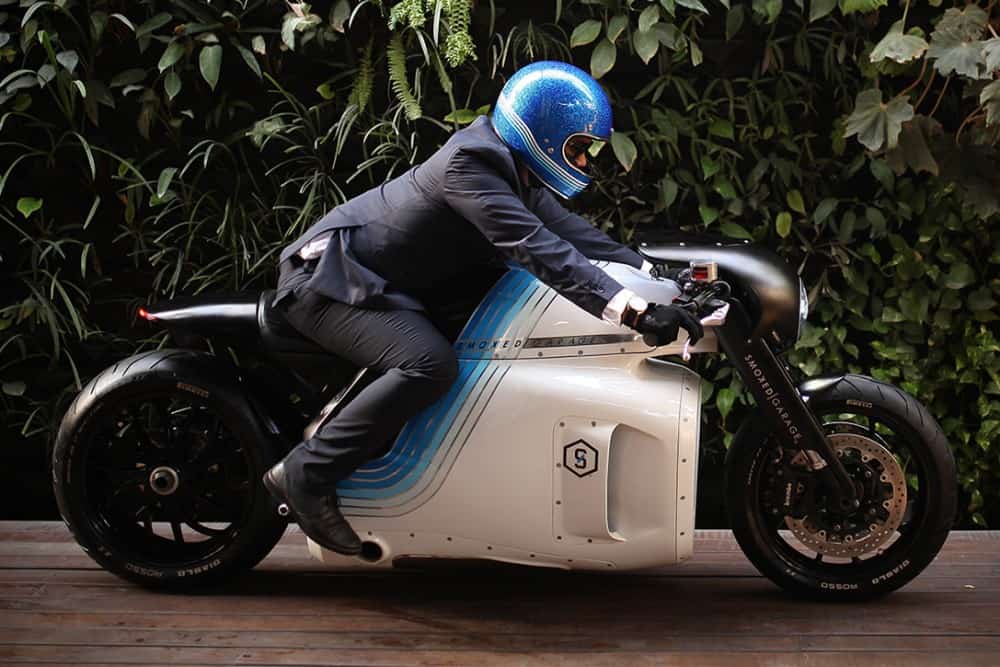 I wouldn’t recommend riding this in a suit and I should think the emissions from the exhaust port exit by your foot would make that suit soak up all them lovely fumes. 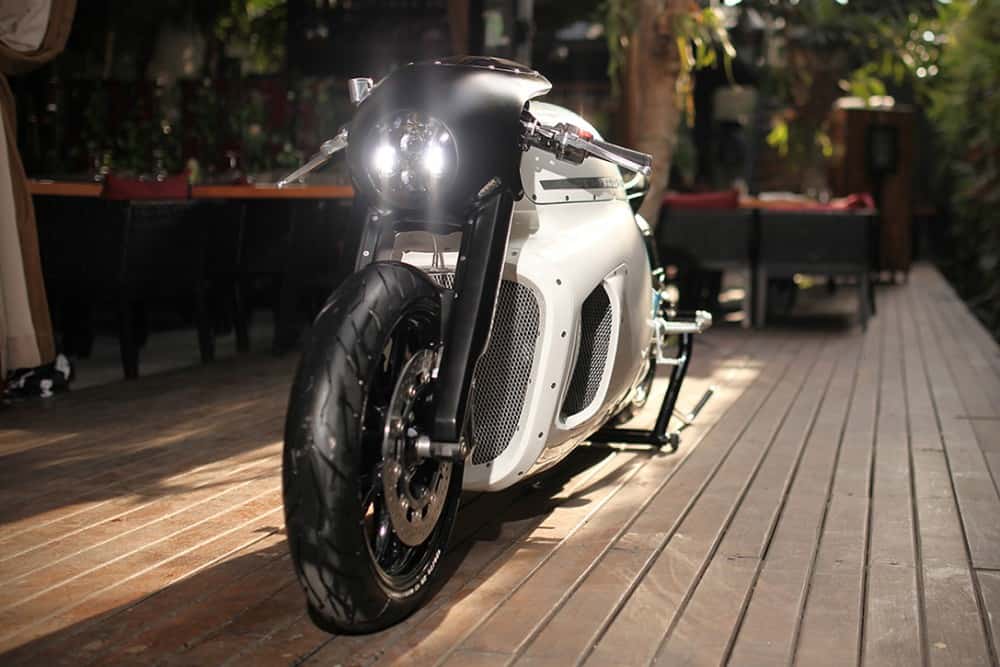 Unfortunately practicability has been bunged right out of the top floor window as there is no side stand and you would have to have a Support car carrying the Motorcycle rear stand for you when ever you wanted to park it up some place. 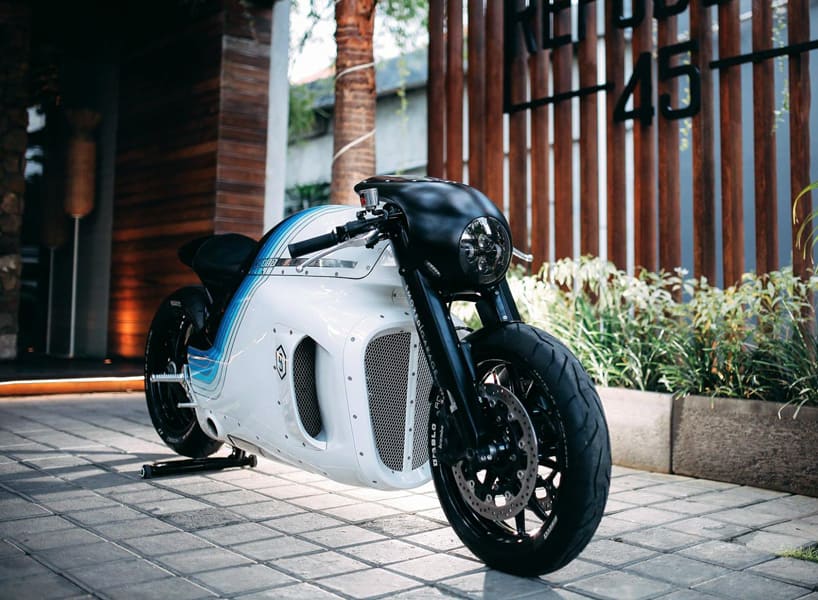 Don’t get me wrong, I would ride the thing anywhere on a flat surface for sure, just wondering how the heat is under that Cowl and does it all dissipate around your body as you ride? 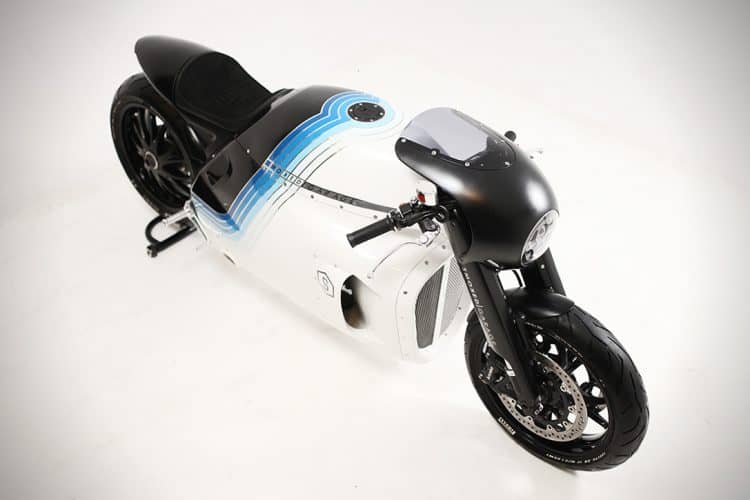 At least that LED Lighting will let people know you are approaching them. 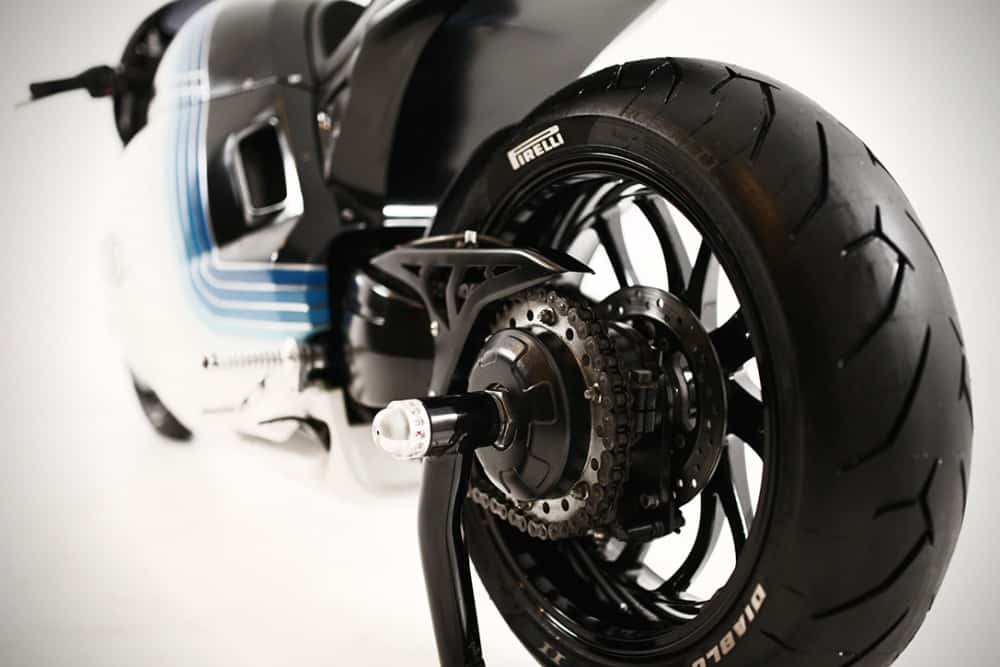 I loved the rear wheel set up and having the disc brake rotor Behind the sprocket but would be concerned that all the goop from the chain would spalsh all over that Rotor, making barking a frigging Nightmare.