Well, this time I want to feature a bit about the girls this time and some of the cool clubs that are around the world etc, my girlfriend rides and in my club I have Girls and love it when we see Girls on motorcycles and hats off to Whole clubs with them in.

This Club is up on the East Coast of the States and a cool looking club too, enough of me, here is their Club.

Even if you’ve never been on a motorcycle, there’s something about spending time with The Miss-Fires that convinces you to leave all of your concerns about riding behind and just throw on a helmet. With this (predominantly) Brooklyn-based, all-female riding group, bullshit always takes a backseat to riding.

In October 2013, the idea of The Miss-Fires was born, naturally, via text message. 34-year-old Corinna Mantlo reached out to fellow female riders to take a dinner ride. As more rides occurred, the group continued to grow by word of mouth. One evening, a lengthy Post-It-note list of options eventually led to the club’s official name.

“The name ‘The Miss-Fires’ stuck with [everyone], because it doesn’t take itself too seriously,” Mantlo says, citing that in motorcycle terminology, a ‘misfire’ technically means you’ve messed up, that your bike isn’t going to start because of a fizzle of the spark. “A lot of the other women’s clubs around the country are ‘The Hottie Babes’ or ‘The Super-Awesome Sexy Girls.’ And, that’s not us.” Instead, they selected a name that keeps the riding club both humble and determined.

Over the past year or so, The Miss-Fires have officially grown to include more than 100 women — ranging from their 20s to their 60s — who ride and wrench at all different levels; their bikes, too, are an array of different styles and types, from Ducatis and Triumphs to Yamahas, Hondas, Suzukis, Harleys, and more. While some of the women only picked up bikes in the past few years, others have been riding motorcycles since they were children; for example, 60-year-old Andrea Young has been at this for 50 years. Ashlinn Romagnoli learned a couple of years ago while her dad was taking up riding again. The 27-year-old told her father, “If you’re gonna do this, you’re gonna teach me, too.”
One of the most fascinating qualities of The Miss-Fires, however, is the diversity of backgrounds from which they come. While riding may be the driving force that brings them together, it’s just as interesting to look at their passions off the bike. Soulful singer-songwriter Julia Haltigan rides alongside scientist Alison Cutlan, who is currently developing her own probiotic skincare line. In-house lawyer Dani Nolan hangs with commercial tailor Leslie Padoll and fashion photographer Ashleigh Ide. There’s a Glamourmagazine editor, a handbag designer, and a financial controller. There’s a visual designer, a Wall Street vice president, and a leather designer who’s worked with Prince. It’s a melting pot of women one would not necessarily suspect to be avid motorcycle riders. And, that’s the coolest part.
PHOTOGRAPHED BY MARC MCANDREWS.
Being such a rising, powerful force in a male-dominated culture certainly has its fair share of challenges. Lynda Lucas, 28, has witnessed the stigma against female riders firsthand. “There are so many times I’ve experienced push-back or sexist comments,” she says. “I think there’s something really empowering and inspiring about being a woman rider. You get strength from pushing yourself and learning how to do something that not even a lot of men will do. It’s something that will change you forever.” Suzanne Cellura, 34, often receives negative reactions because of her bike, a 2013 Ducati Monster 696 ABS. “If people see me on it, sometimes I hear stupid things like, ‘That’s a big bike for a little girl,’ she explains. “I’ll ride harder than any guy there. I purchased that bike because I wanted a bike that performed well. I wanted to ride hard. That’s what I do.”
Such comments are often an outcome of the assumption that women ride motorcycles to get attention. “There are a lot of girls who want to get attention for being sexy on a bike, so there are a lot of stereotypes,” says 40-year-old Kim Kenney. “You need to make sure you present yourself appropriately, be safe, wear your gear, and know what you’re doing — and that’s challenging for women [who] want the attention for the wrong reasons.”
PHOTOGRAPHED BY MARC MCANDREWS.
The Miss-Fires became a place for female riders to feel connected within a culture where riding alone or amongst a group of men seemed like the only options. The individual journeys these women have embarked on have allowed them to find their inner selves (Nolan says participating in The Miss-Fires has encouraged her to come out of her shell) and, naturally, their senses of style.

“In real life, I don’t wear pants, and I don’t look good in pants,” says Kat Thomsen, digital managing editor at Glamour magazine. “I wear a lot of ’50s vintage dresses, crinolines, and heels. A lot of The Miss-Fires don’t know that side of me, whereas my colleagues know a different side. I own more jeans [now] than I did before, but I only really wear them on the motorcycle.” Romagnoli, too, admits her personal look has become more influenced by riding. “What I wear in the summer is dictated by my riding,” she explains. “I have to wear long pants and boots. Also, now I only wear high-waisted jeans because I’m sitting down all the time.”

PHOTOGRAPHED BY MARC MCANDREWS.
For Heidi Hackemer, founder of strategy shop Wolf & Wilhelmine, incorporating her own sense of style by putting a personal touch on her favorite leather jacket has blended her two worlds seamlessly. “I bought this jacket, and I put this wolf on about a year ago,” she says. “Then, I gave it to my niece to paint. She was like, ‘But, this was your favorite motorcycle jacket!’ And, I said, ‘I know. That’s why I want you to paint on it.'” The result is a gorgeous riding jacket, something that truly represents the greatest passions in Hackemer’s life.
Unsurprisingly, The Miss-Fires are a huge part of why the motorcycle industry is changing — especially when it comes to the female biker scene in New York City. “I know The Miss-Fires are definitely encouraging ladies who want to get motorcycles,” Heavy Leather NYC owner Rachael Becker comments. “Now, I can encourage [women] to get their licenses, because now there’s a presence of female riders in the neighborhood. Before that, it was really daunting to get one if you were a lone rider.”
PHOTOGRAPHED BY MARC MCANDREWS.
With fundraisers like bike washes, speakeasies, and barbecues accompanied by the sounds of Thomsen’s honky-tonk band, Your Ex-Girlfriends, The Miss-Fires have a good time on and off of their bikes. The women-only club even hosted an evening at Mercury Lounge featuring Thomsen’s band and Haltigan.

The Miss-Fires’ passionate vibe is contagious. “It takes a certain kind of girl to want to ride,” Lucas says. “It’s hard to explain, but everyone is kind of a badass at heart. Everyone is so caring and supportive of each other. It’s just a big family. It’s pretty great.”

Some of these photos do not have their names on but if you took these let me know all inf so I can post and give credit for your work.

Q. How did you decide on the name?

A. Everything we’re about is having fun, encouraging each other and never taking things too seriously. A misfire is a product of having an ignition system problem, bad timing, which results in your bike or car not starting well. The Miss-Fires is a twist on the idea that we’re all constantly learning, making mistakes and becoming better, stronger riders, wrenchers and people, while having fun doing it.

So great to see a Club grow and of course have fun at the same too.

Plenty of Brit Tin to be seen in and around Brooklyn and the Miss fires are no exception, hearing them Thundering around must turn many heads. 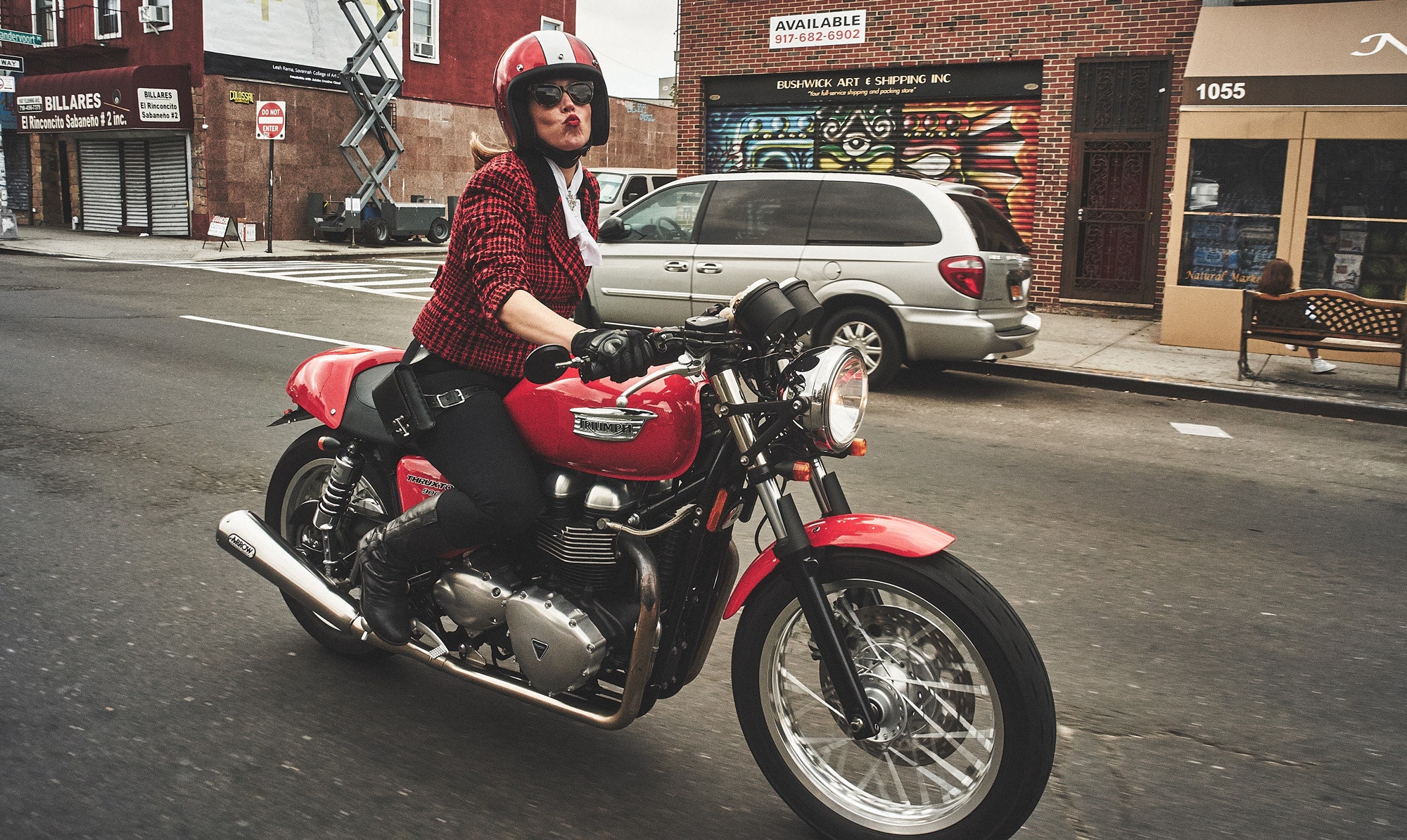 Just some random shots I saw on Google from this awesome club.

Doing up her lid and ready to Rock in NYC.

I hope to feature other great female Motorcycle clubs so stay tuned….