Saw this and thought I would bung a quick Blog on here for you. 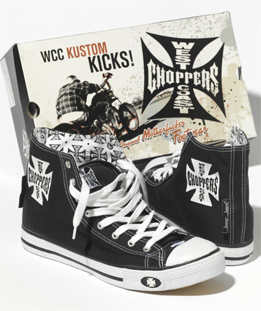 Yesterday, I had a conversation with Jesse. For you my readers, he gave me the exclusivity of a huge announcement for the custom motorcycle scene. He is relaunching West Coast Choppers. It is almost 4 years that the brand was silent, but the brand equity or goodwill that Jesse owns with West Coast Choppers never faded, quite the opposite. The more difficult it was to order a custom from him, buy one of his parts, or a piece of his logo gear and clothing, the bigger the WCC brand grew, both here in the US and abroad. A name and a brand encompassing through logo, image and perception the best of what is the Chopper Kulture.

Jesse was telling me how much he continues to be moved by the support and encouragements he receives. Yes, he is very sentimental about this, both humbled and still surprised by so much admiration. Is he just a “glorified welder”, the way he likes to described himself? Or much more? Just read the positive responses he receives when he posts on Twitter (186,000 followers) or Facebook (59,000 people like him) or Instagram. In the mind of bikers, Jesse James and West Coast Choppers, separately and together, embody a promise about the products they are selling: true Chopper attitude,.the real stuff with no BS… Continue reading ‘Exclusive: Jesse James Is Relaunching West Coast Choppers.’