On Sunday, Jennifer and I will be attending the Grand national Roadster show, of which I was lucky to WIN trophy’s Three times for my Cafe Racers, but, I have always been into Hot Rods and back home in the 80’s I had my very own three Window, chopped and channeled 32 Coupe. 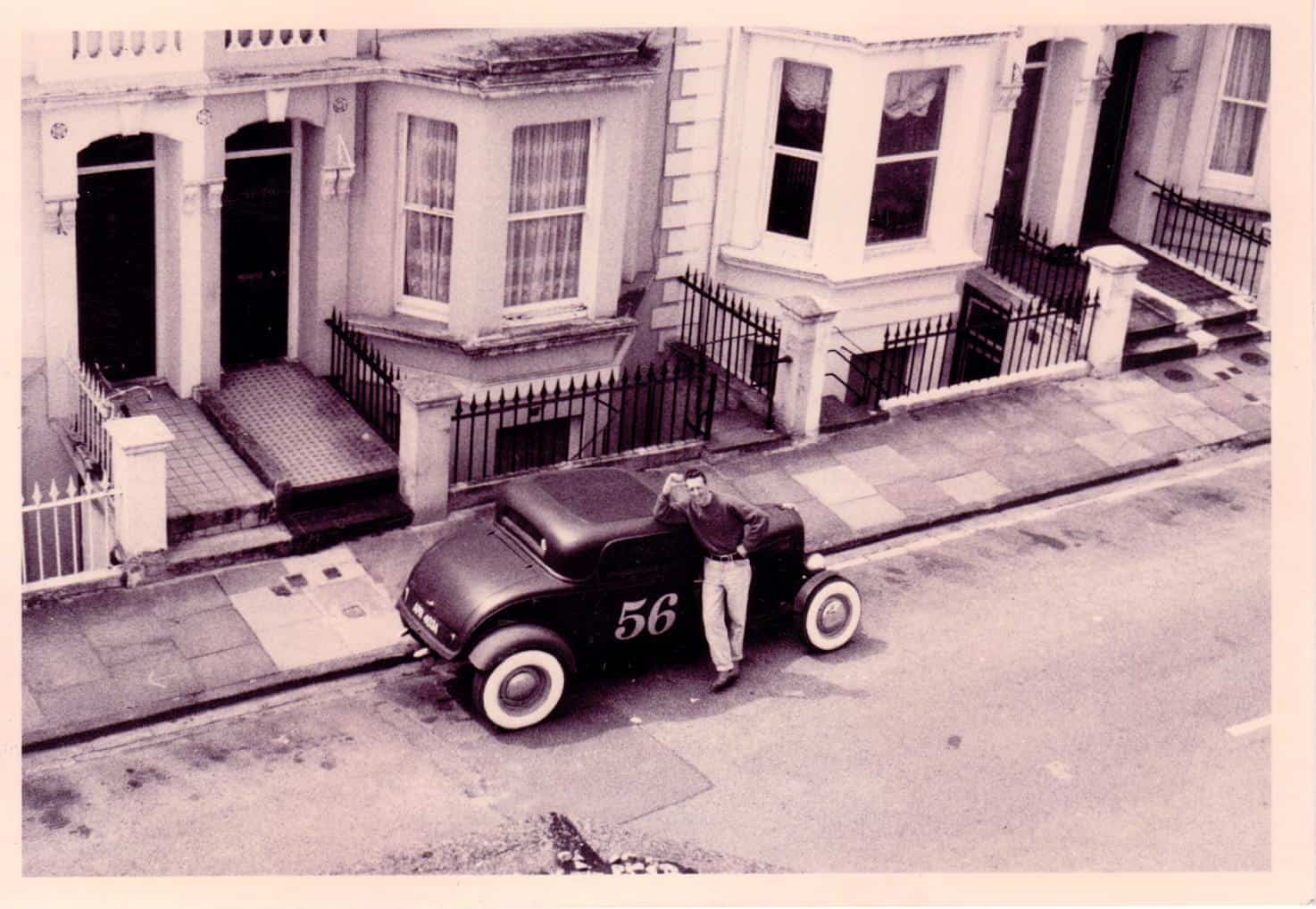 Well, I now have a stock 1929 Model A Roadster, More Rust than I really had thought and needs a total strip to the frame and will fit a flathead etc and what I have been looking for is a cool color, I love Black but many out there, I love Blue but built  a 29 Roadster in early 2000 and that was Blue. 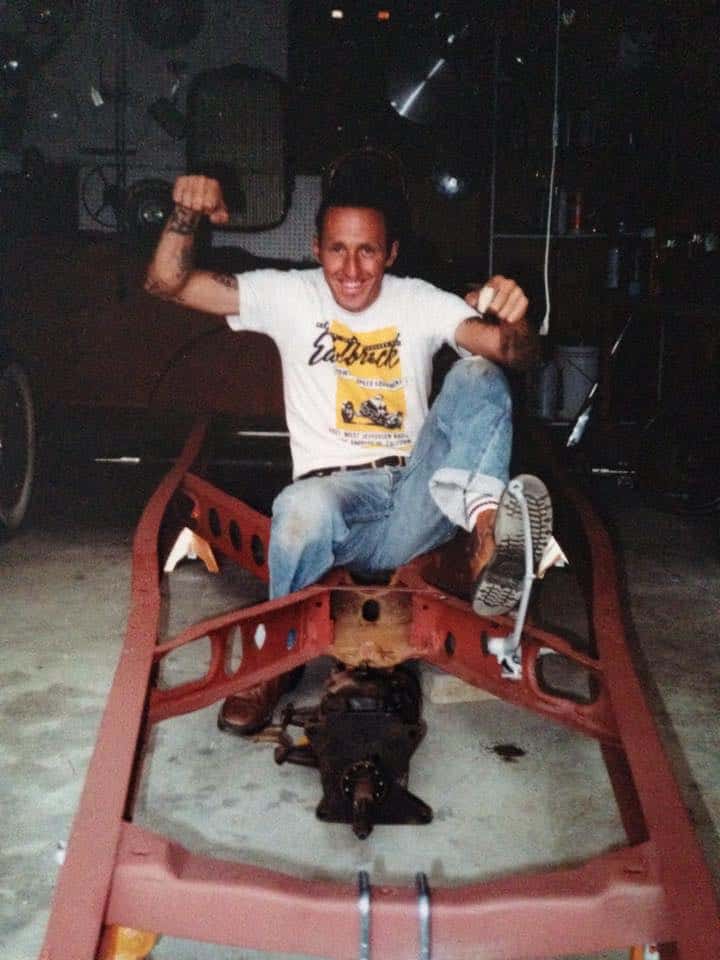 This was a great ride but had to sell it when bills at the house got out of control and I sold it and it ended up in Japan where it still is today. 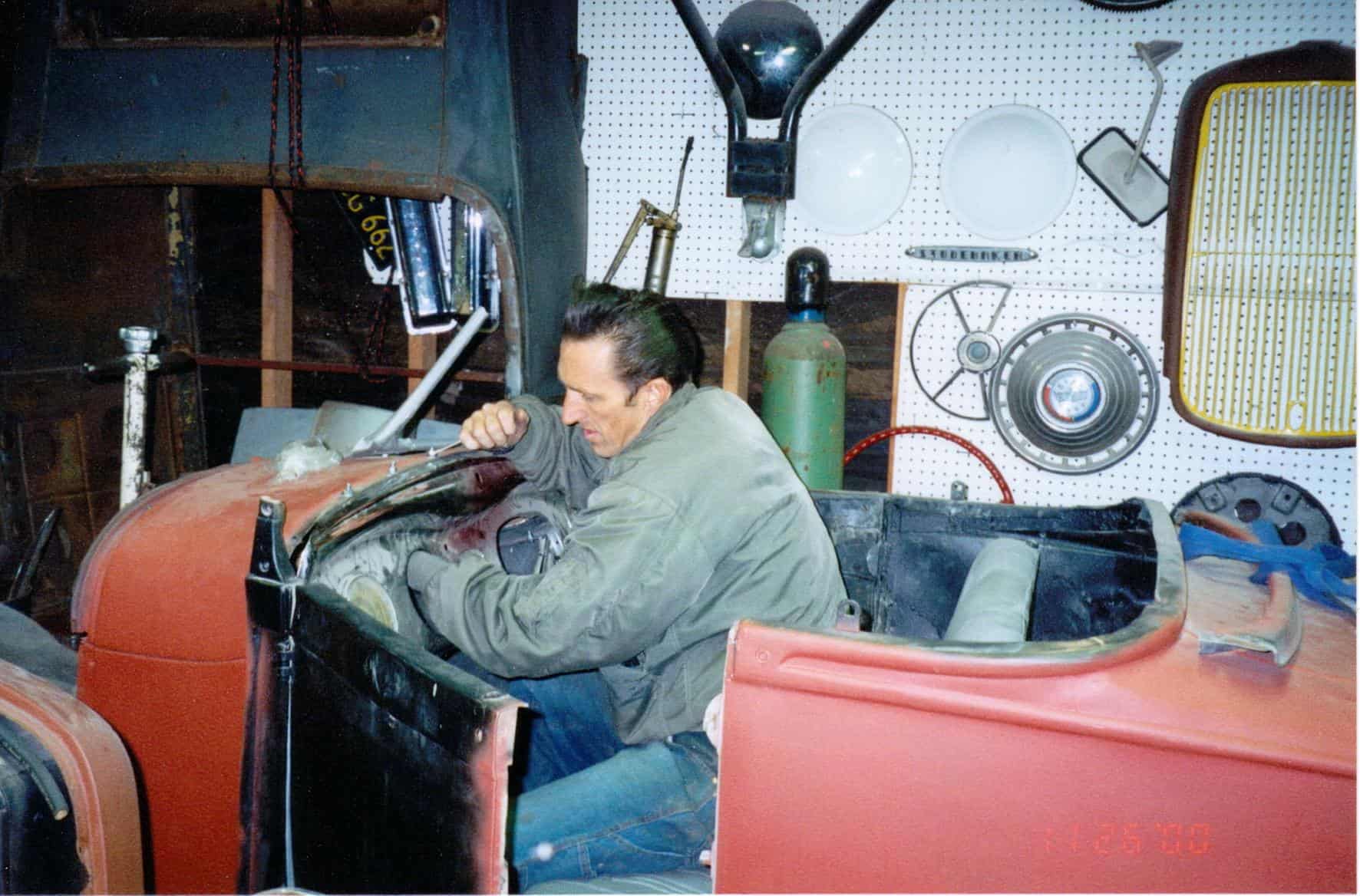 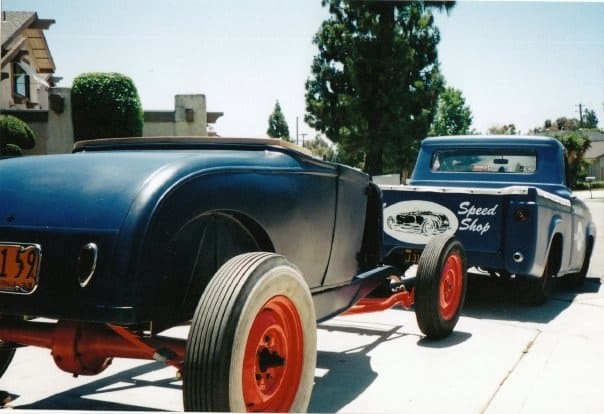 I am hoping to get the Roadster into a Vintage style by Next year with any luck and of course, in Memory of my Dear Mum of which if it wasn’t for her, I would not be here. So I have been looking at Car shows with Jennifer and of course any where I see a Color that jumps out at me to try and think of what would look great on my Hot Rod. Jennifer and I both thought a WW2 style Green would be different then I saw a buddy I know has just completed his 32 and painted his Green, and this was the color I looked for over the months, so may have to go a little darker, but this 32 Roadster is so nice I had to share it with you all. I love this Hot Rod and am sure you do too.

This weekend and Its going to be a super show with many cool rides for everyone.

Mine will never be as cool as this but  will have fun with my ride for sure so, wish me luck.here is mine right now. she needs tons of work but it will be a fun machine later.

Below is what HOT ROD wrote about this super cool set up and I wanted to share this with you today, if you are at the GNRS on Sunday drop me a text or message as I shall be there with Jennifer and would be awesome to see you.

Some of the best advice a father can give to his son is the phrase: When you want to learn how to do something correctly, watch a professional do it. The “right way” is nothing that can be taught by reading a technical book or even watching a YouTube video, but rather hands-on immersion and a learn-by-doing mentality.

Darryl Hollenbeck, a 48-year-old automotive painter who grew up in Concord, California, had a distinct advantage when it came to learning his craft: his grandfather, uncle, and father were all car painters, with Dale (Darryl’s dad) carving out a respectable niche in the custom car world before he died in 2003.

Now known as the “go-to” guy in Northern California for many of the country’s top rod builders, Darryl’s paintjobs have been found on an America’s Most Beautiful Roadster award winner, dozens of STREET RODDER and Rodder’s Journal cover and feature vehicles, and well as a handful of Pebble Beach Concours d’ Elegance show winners.

But Darryl’s approach to all these cars is the same: it’s all in the details. As owner/operator of his Vintage Color Studio in his hometown, Darryl usually works by himself, perfecting any given body long before the color ever leaves his spray gun. But he’s also a car enthusiast and, after working on dozens of vehicles over the years, he really wanted a hot rod for himself, but time, the job, and money always seemed to get in the way. He did get close a few years back, starting a 1932 roadster project, but he ended up having to sell the car well before it got finished.

Recently Darryl’s friend, Brandon Flaner of East Bay Speed & Custom, told him about a project that someone had lost interest in. It was another Deuce highboy roadster, with a standard street rod build started but not finished. Darryl bought the car but soon realized, considering his workload, this one may not get finished either.

As fate would have it, one of the cars slated to roll into Vintage’s paint booth was a Deuce highboy from Cory Taulbert. The Michigan native is a part-time rod builder and married to the former Ashley Webb, she’s the daughter of fabricator (and former Ridler winner) Dan Webb. As anyone who knows Dan can attest, he likes a good joke, and when dialing in the drop-off times for the roadster to get painted, Dan half-heartedly suggested Darryl trade the paint- and bodywork on Cory and Ashley’s roadster for the build and fab work on Darryl’s ride.

Not wanting to potentially ruin a good friendship with Cory (as it happens sometimes in these situations), Darryl discussed the trade with his wife, Terri, and the pair decided it was probably the best way to get his car finished, so they said yes and, in February of 2014, the swap was made. Once at Darryl’s shop, he started working on laying down a perfect single-stage black paintjob on Cory’s ride, and Darryl’s roadster ended up in Michigan at Webb Automotive Art and up on Dan’s chassis jig.

Though sufficient for a basic street rod, most of the items on the chassis would be out of place on the style of car Darryl wanted to have, so the SO-CAL framerails were left, but just about everything else, including the X-member, was removed. In went a 1940 Ford X-member, which already had provisions for the correct pedal assembly Hollenbeck wanted, and the rear was kicked a little to lower its stance and accommodate the Model T spring.

Dan and Cory also installed a Rodsville Halibrand-type rear (4.47:1), which was prepped and painted by Brandon Flaner. The rear featured Dutchman axles, and is located with a custom three-bar system (two lower outer rods along with an upper center rod) built out of split 1940 wishbones by Cory, who also fab’d the Panhard bar.

MT Products’ 1940 Lincoln-type drum brakes are on each corner, and a transverse spring and SO-CAL shocks smooth out the ride. Steering is handled by a Vega box and a LimeWorks column, and original 1940 Ford 16×4 wheels (wrapped in Firestone 500×525 rubber) were used up front while 18×4.25 wheels were shod with 700-18 tires.

Darryl turned to Edelbrock for one of their 380-horse crate motors, which was outfitted with an Edelbrock 2×4 intake manifold, a PowerGen alternator, and an MSD ignition with Taylor wires. Cooling is cured with a Walker radiator and Cooling Components fan while stock ram horn headers and a custom 2-inch stainless steel exhaust removes unwanted gases. The V-8 bolts to a T5 BorgWarner transmission, prepped by Astro Performance. What chrome there is on the car was handled by both Tennessee’s Advanced Plating and California’s Sherm’s Custom Plating.

The 1932 body originally came from Brookville Roadsters, and Dan and Cory fit it with Rootlieb 25-louver hood sides, a sectioned hood, and a Brookville Deuce grille shell and insert (with a custom center bar). More custom fabwork can be found inside the cockpit, with Dan fab’ing gloveboxes for the ends of the Deuce roadster dash, which was also lengthened for the Stewart-Warner Hollywood five-gauge insert that features a big Police speedo. Cory also modified a Model A shifter to work with a Pro 5.0 shift tower, and DynoTech supplied the driveshaft.

Once all of the fabrication was complete, the roadster was returned to its owner where he and Darrell Schneider prepped the ride before Darryl added the color, which, along with its stance, may be the most important thing about the car. Most folks toil with the choice of color for their rides but, with Hollenbeck being a well-known painter whose choice would also make an obvious statement, color choice became critical.

Not wanting what someone else already had entered into the decision picture, as did making sure the wife liked it, too. The roadster had a lot of traditional elements, so something that looked like it could have rolled out on a Lincoln in 1940 would be going in the right direction. All said and done, Darryl mixed up his own unique shade of brown with PPG Envirobase waterborne paints to cover his car.

Once out of the paint booth, construction continued with help from Joe Compani and Ryan Campi of Compani Color (who prepped and painted the chassis), as well as Jack Stratton, plus Bill Ganahl and his team at South City Rod & Custom, who helped with final assembly. Next came the addition of a one-of-one Bop Top from Sid Chavers (the bows were repositioned), the chopped windshield posts from Cory, a set of Guide headlamps, and a pair of taillights and door handles from a Chrysler Airflow. A LimeWorks Crestline steering wheel fits the car’s profile, and a multilayered chunk of paint from Darryl’s father’s paint booth was turned down on a lathe to produce a one-off shift knob.

Cory Taulbert flew out to NorCal to wire up the roadster using pieces from Rhode Island Wiring Service harness and an Enos panel, and Sid Chavers created the bench seat in the car before covering it with sections of leather as well as a fabric insert piece from a 1969 Cadillac.

Both Darryl’s and Cory’s roadsters were finished up (Taulbert got his dream paintjob—an inky black one-stage for his Deuce) and the pair decided to debut their rides by driving them from their respective states to the Roadster Roundup in Austin, Texas (a 3,400-mile roundtrip for Darryl), in 2015.

But for Darryl, just as important as delivering a world-class paintjob is making and maintaining the friendships he’s fostered throughout the years. For him, he wouldn’t want one at the expense of the other and, luckily for the rest of us, he’s really good at both!