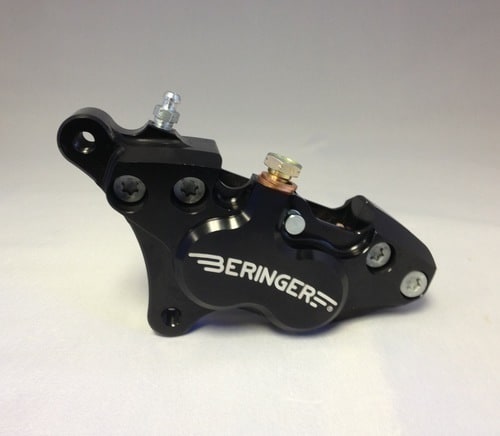 In the meantime, Beringer continued on their road to innovation, obtained several world patents for systems like their championship-winning (Stephane Chambon, Ducati 916, 1995) Aerotec 4-D quadruple front disc system. Their Aerotec ball bearing, pivoting brake master cylinder came soon after to alleviate the inherent design flaw of all other brake levers: side loads and friction due to the arcing manner in which the piston travels.  This same principal was applied to a floating rear master cylinder. Then came the Aerotec brake pad mounting system that totally frees the pads to move in and out. The Inboard system, derived from airplane technology, is the latest in Beringer’s innovations
Many Championships later (World endurance, World, European, United States, and other nationals in many countries in SuperMoto and ATV racing), Gilbert and Veronique Beringer decided to split the company in two divisions, retain and develop the aeronautic branch and hand over the keys to the “land based” division to a whole new crew.  This new crew moved into a brand new 16,000 sq ft state of the art facility near Lyon, France, in March 2010.  This new entity also brings a U.S. Base that is located in Arkansas.  This greatly assists in domestic U.S. matters.  In addition, the U.S. Base incorporates a proprietary forging technology called Cobapress – that will allow Beringer to produce top quality forged calipers for a fraction of the cost of the original billet components. 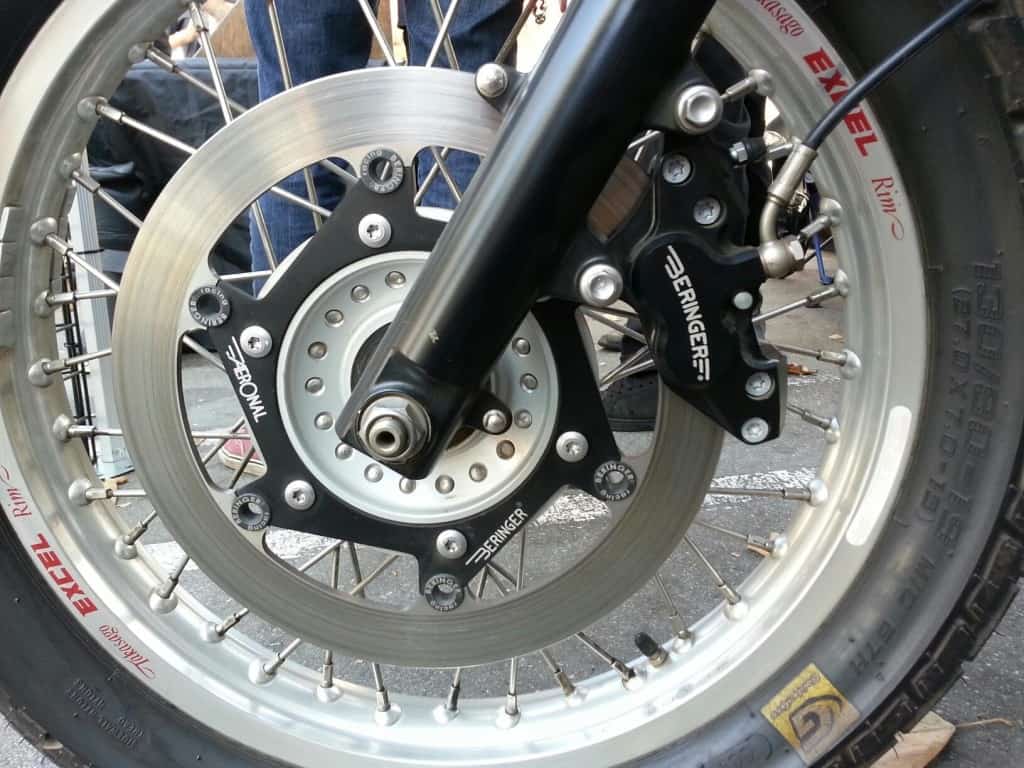 And Now I have become a Dealer for this superb and renowned company and can offer their full range of parts etc, so if you are looking for something to give you better stopping power, then look no further. 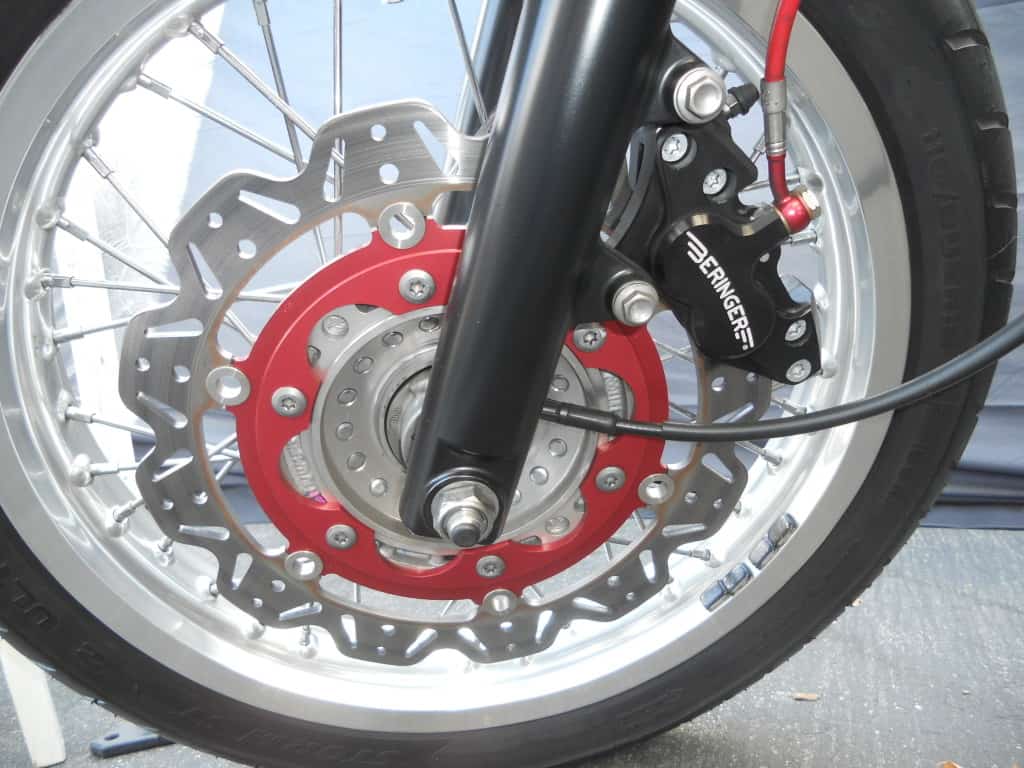 This is an easy no Brainer to fit to be honest and I thought that I would go outside and bring my 2013 Thruxton into my shop, and remove the stock Caliper and fit a brand New Beringer 4 pot. So I moved my bike in and as you can see, here is the stock Caliper Bolted to the fork leg on my Triumph Thruxton and, will be the same for your models. 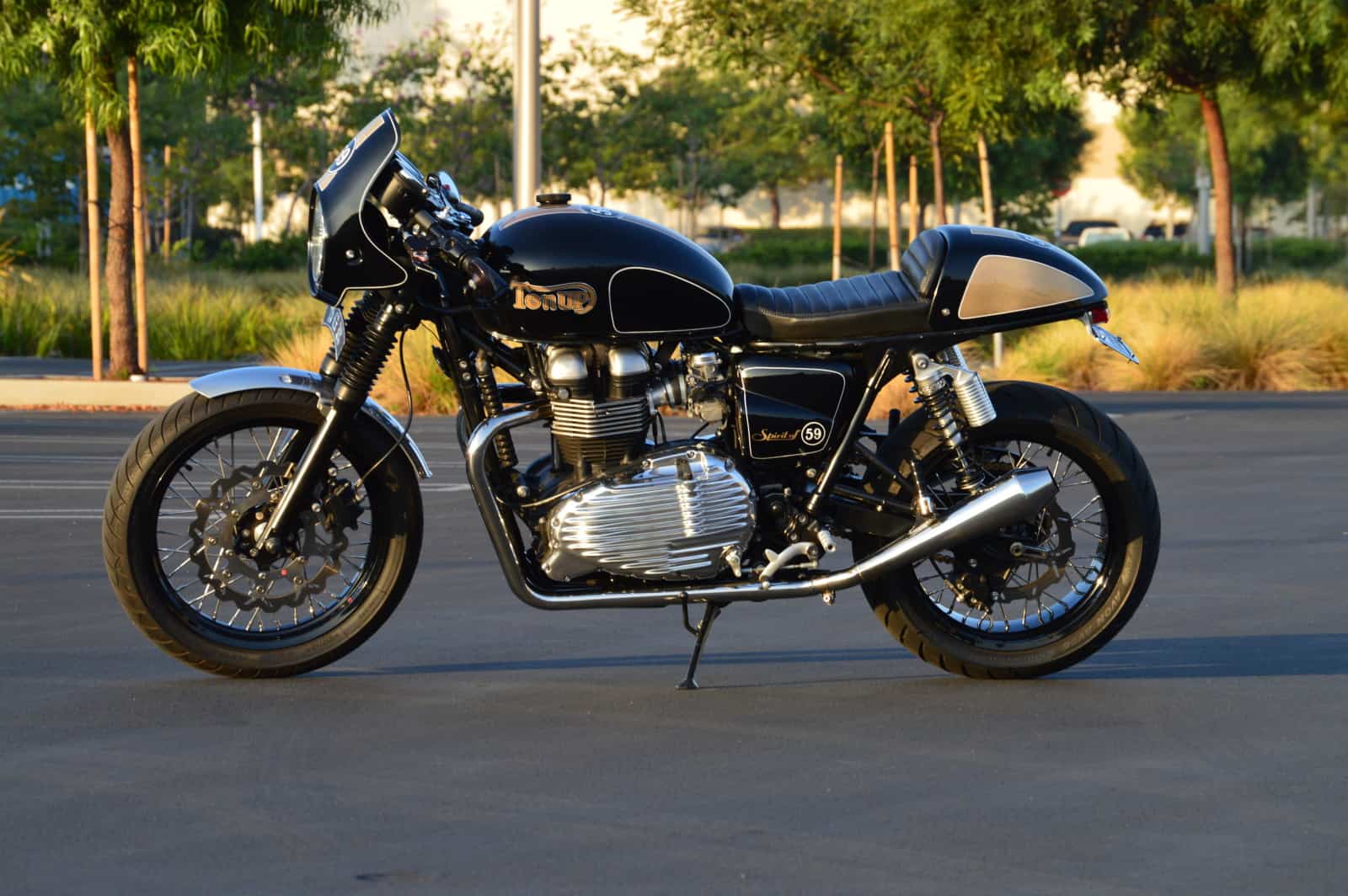 The easiest way for me was to lightly undo the brake line bolt to take the tension off but, not enough to let fluid out, then undo the 2 main bolts and remove the old Caliper from the Fork leg and let it hang for a second. 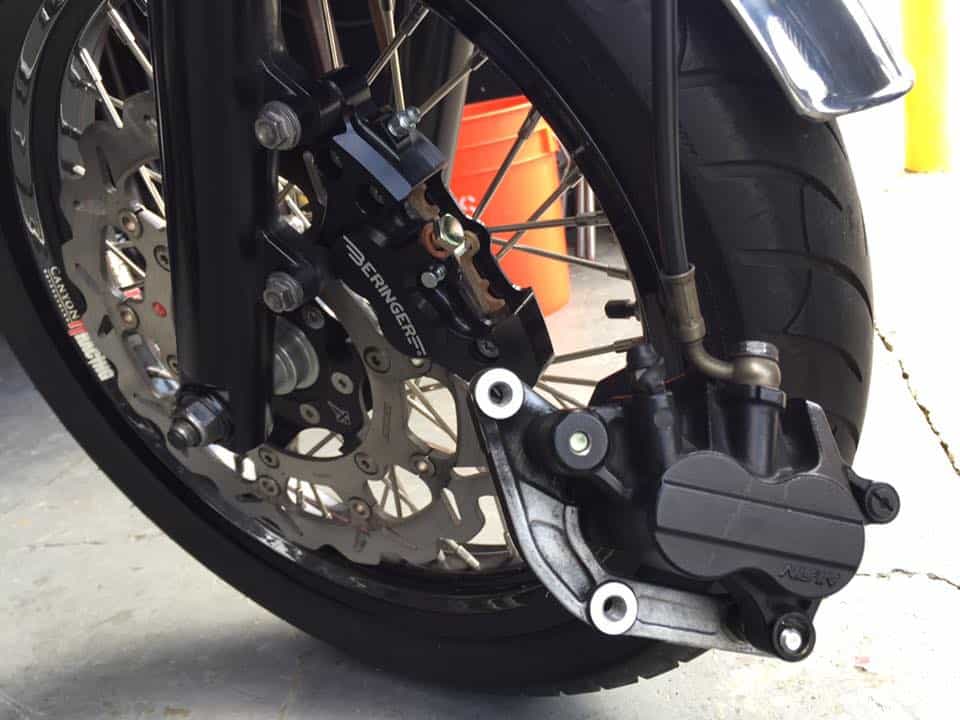 Then. I moved the brake pads in the new Beringer 4 pot caliper and test fitted it onto the Rotor and see if the mounting holes lined up, and they sure did, so put the New Beringer caliper on the floor again and then undid the brake line bolt, fitted it to the new Beringer and then bolted to the Fork leg, this was way easy to do and in less than 5 minutes too. 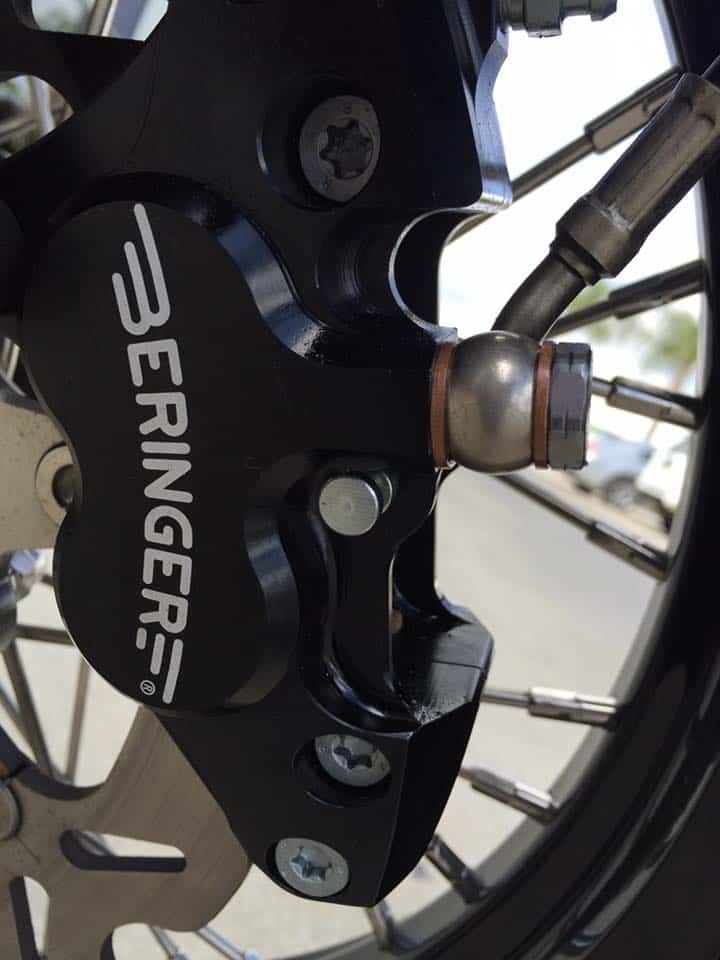 Well, I then cleaned some of the Brake fluid that dripped from the bolt and made sure I use new Copper Crush washers and these are supplied by Beringer anyway, and made sure all was snug, I took the lid of the master cylinder and refilled the reservoir with fluid, using a 9 mm wrench I undid the Bleeder and used a Clear hose on the bleeder to watch for air bubbles as I pressed the brake lever, then locked up the bleeder as I let the lever back out, not wanting air to go back into the system etc. 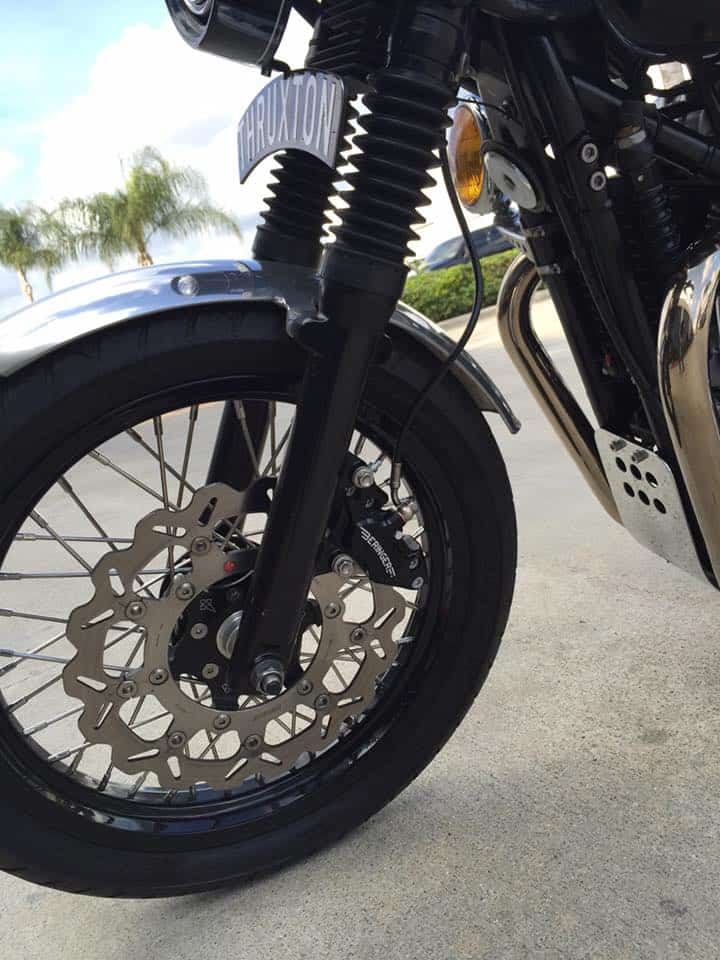 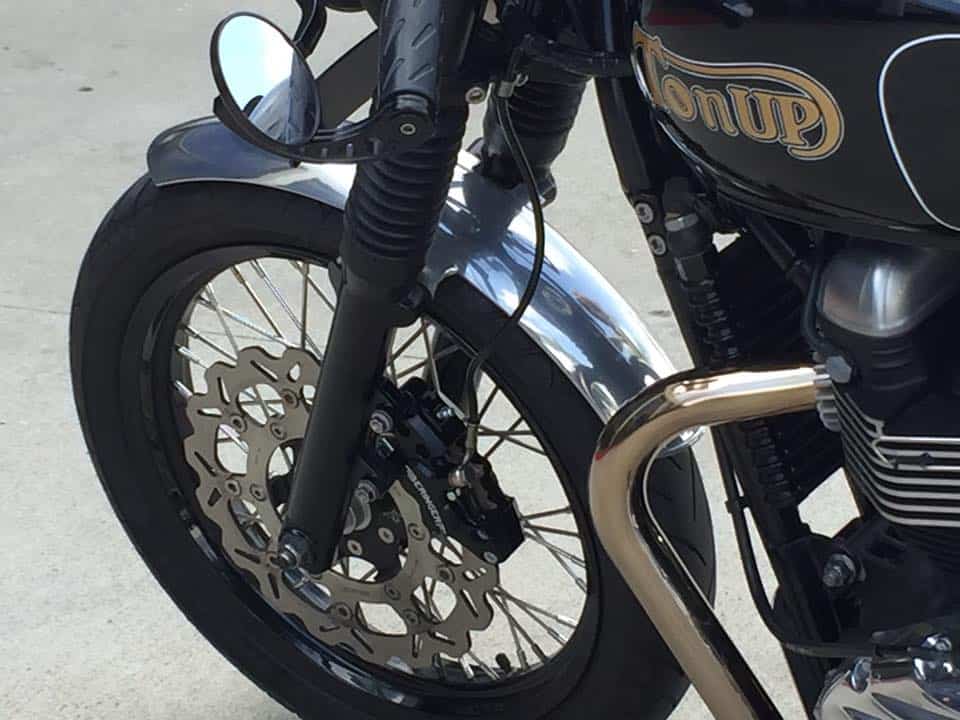 I then fired up the bike and outside let clutch out and tried a few 10 feet stops, then 20 and so fourth until I was confident that the brakes were clear of any air bubbles,and she grabs so much better now and have much more confidence in this set up compared to the stock configuration. 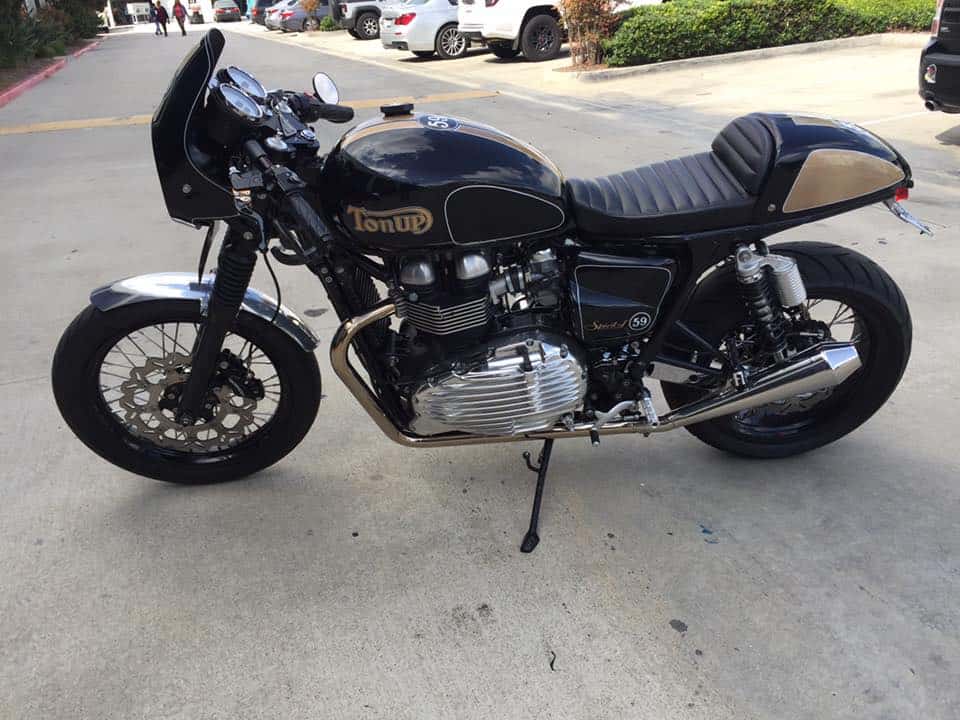 This set up is so cool and makes a world of difference and I hope to continue with Beringer parts as next up will be a Beringer Master Cylinder and levers etc.