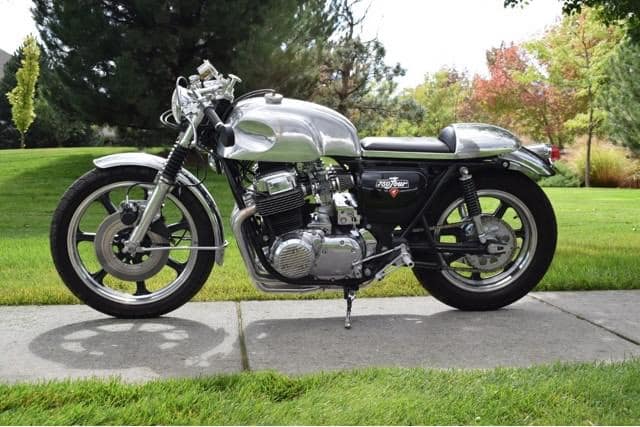 Welcome to Readers Rides, I started to do these about 15 Years ago and think I should return to these, so people can get inspired from many peoples own creations, they can see their machine and what it consists of parts wise and many have my parts on their Motorcycle, so if you have time, drop me a line with as many cool photos with good angles and maybe some great back drops, ie- Bridges, River, castle, Pub, Water fall, Bricks etc and lets feature your Machine. Show the world that we have very similar tastes and look forward to opening the Global book of our readers Rides.

Below is the first cool bike that I hope to receive more pics but- a Good taster to get you lot going, how about Sonny Morrisons CB750K Model Cafe Racer, Sonny is from Rancho Cucamonga in California and about an hour from me. 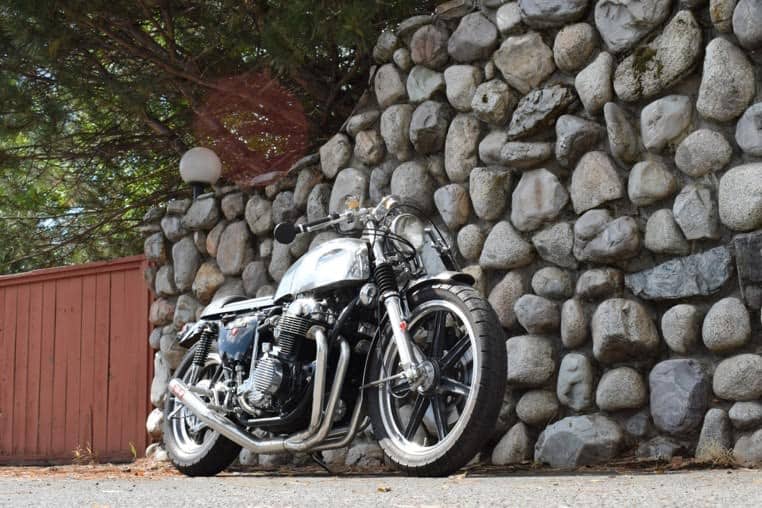 OK, I am still awaiting some more information on this build but will feature it and add when I get more input from the owner, above is Sonny Morrison’s SOHC Honda and its a Cracker. 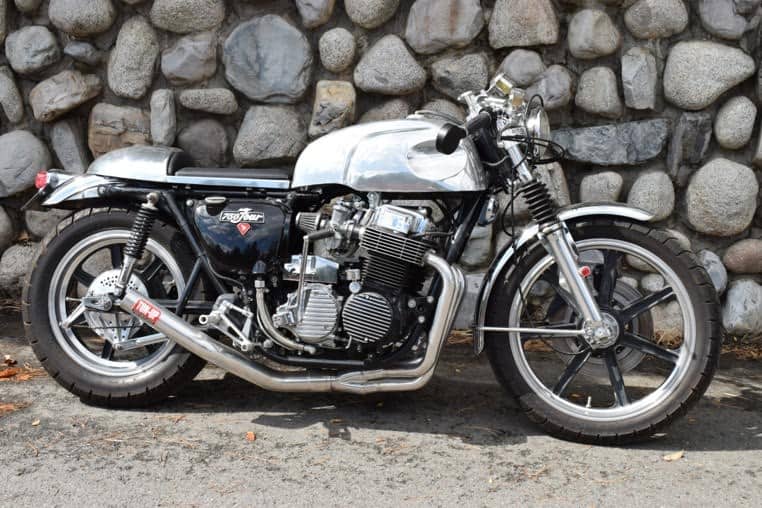 What a great looking Cafe Racer Machine, right up my alley, or as you look at this photo, right next to a Rock wall, this machine is tough and and enjoying the 19 inch front Lester Rim and either a 16 or 17 inch rear. 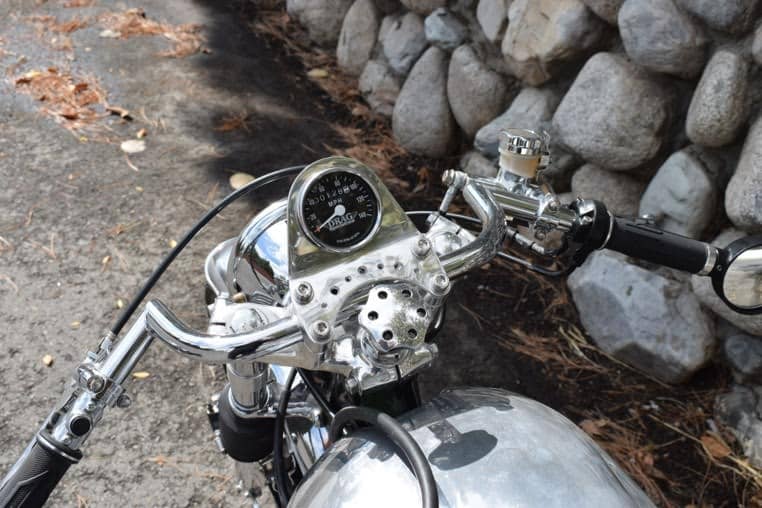 Sonny used one of My Custom 2.5 Speedometer gauge Brackets that I manufacture and it certainly looks at home on top of that Polished triple tree, love the dampener set up on-top too. 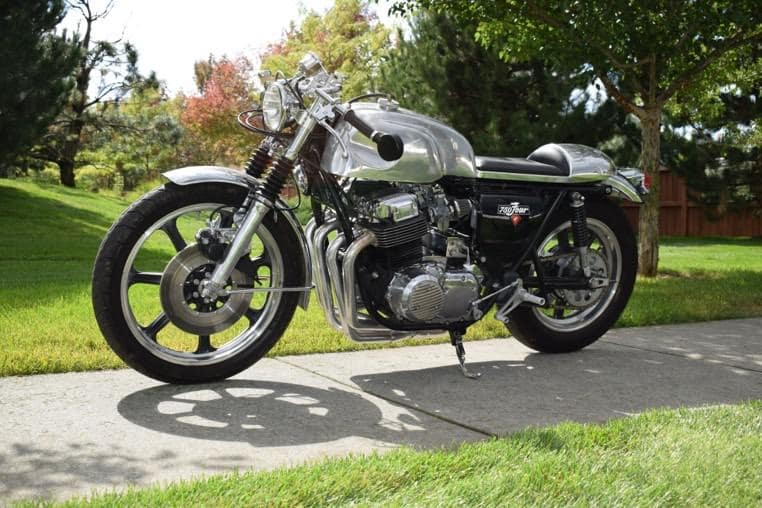 Hand Rolled Alloy Gas Tank and Seat really suits the bike, not sure where he found this set up but will let you know when I have a build or spec sheet from him but it sure looks nice. 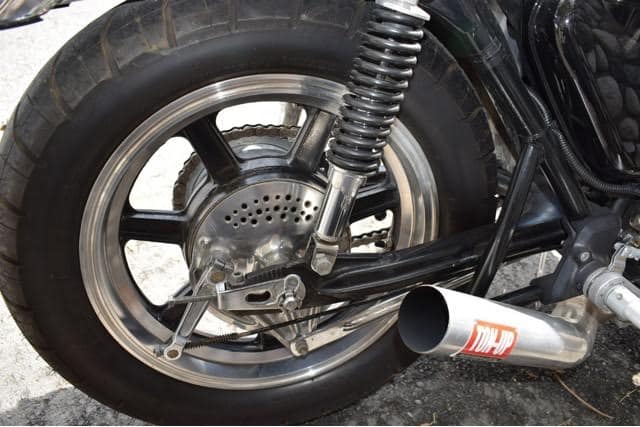 Has my 4 into 1 Exhausts system and the Rear Sets I sell, this CB750 is built for getting around the twisties on any day of the week. 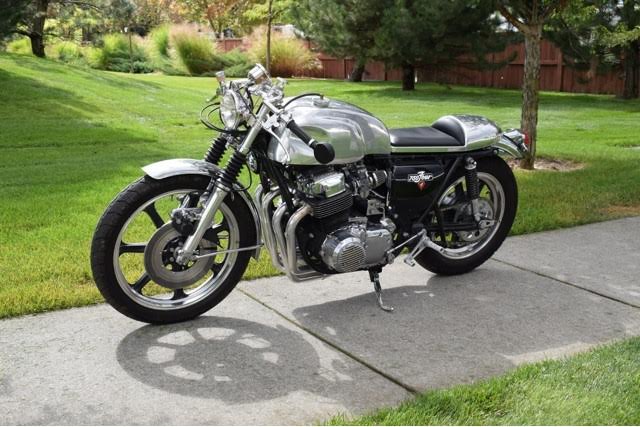 Loving the Manx Tank, I am guessing its from India, the front forks look to have been rebuilt and polished, that 5 Gallon Tank will get him a long way too and love the fact he used hos original rear Mudguard for that Classic look.  Clip one and minimal controls really does make this SOHC stand out.

Thought I would share today and hopefully will be receiving more photos and spec sheet soon. get out in the shed and start building your two wheeled Machine and hope to see some photos of your garage soon.

You can send photos and Spec sheet to: carpy@carpyscaferacers.com and i will feature on the website for all to see, spread the word, lets see your Rides.

Sonny Just sent me this, so thought I would add it on here.

Up here in the Great Northwest Territory of Idaho one has to be creative when building a motorcycle. Finding parts locally is like finding gold. This is my story on my 1973 Honda CB750 SOHC Café Racer build.

After finding Carpys Café Racers online and drooling over his incredible builds I decided to give it a go. I purchased my bike as an old 70’s chopper, I had to drive 140 miles round trip but once I got the bike home I started the stripping process, everything I couldn’t or didn’t want to use came off the bike,

First to come off was the rusty chopper forks and the 21inch brakeless front wheel, I then found a new fork assembly with the inner parts I needed to bring the bike back to where I wanted it,  the donor bike was half buried in the dirt and had been there for decades, the old guy wouldn’t sell it to me unless I took the whole thing, no rear wheel, gas tank, seat, controls or gauges, it was just the frame that was cut up, the forks and a crusty frozen motor.

I pulled the forks and carbs off then placed an ad on Craigslist advertising it for free, a guy came and hauled the sickly thing away! after polishing the fork tubes and triple tree upper I started the rebuild, new seals were installed as well as new fork boots, I bought some progressive lowering springs for the front and I then purchased a set of short shocks for the rear, this completed the lowered stance I was looking for.

I met a chap online who lived quite a distance from me but he not only had the front brake caliper and front fender I needed, but also a set of New Old Stock Lester wheels, So off I went to pick them up, when I got there he offered me a better price on everything seeing that I drove so far, he also threw in a rear fender and some misc parts for free, A really nice guy!

I ordered a new stainless shorter café front brake line from Carpy’s Café Racers which made the install a breeze, I had the front brakes stopping on a dime in no time!, I then moved onto the controls and speedo, since everything stock was missing I bought aftermarket clutch, brake and throttle mechanisms along with all new cables, I then ordered Carpy’s Café Racers lowering bracket for the Drag Specialties Speedometer.

I installed a set of clubman bars and bar end mirrors and the whole front end finally came together, from there I moved onto the engine, I installed new Dynatec electronic ignition along with new matching Dynatec coils and wires, it made a huge difference when starting the bike, just a slight push of the button and it starts immediately. Then I ordered a set of Carpy’s Café Racers Yoshimura style Ceramic coated 4 into one exhaust, although it came with a baffle, I decided not to use it, I like the raw open exhaust sound and wouldn’t change it for a thing.

By the way, it’s been a couple years now and the Ceramic coating has held up great, they still look new! I just love rolling on the throttle and listening to her ROAR ; )… I found a place in India selling the aluminum Manx style tank for the CB750 Sohc, HOWEVER… it did not fit and the fuel petcock mount was an odd thread and I could not find a pipe thread type to fit, I basically ground it down and made an aluminum block, I drilled and tapped it to fit an original factory Honda dual outlet petcock, then I had to cut off the tank mounts, reconfigure everything and have an aluminum welder fix me up, it added some coin to the price of a tank that was supposed to be bolt on and go!

{P.P.S.}  That Singh guy from India has made some good parts but many parts do not fit, just be aware.

Buyer beware of anything from India!.

I decided to get an aluminum café seat pan and seat, but this time from a maker in Florida, this to was an issue as I waited months to receive it, seems they lost my order! the quality and polish was excellent though once I received it. I then bobbed the rear fender and added a Triumph tail light. I ordered new aftermarket side covers, mounting rubbers and factory emblems then painted the side covers gloss black with a clear coat.

I ordered Carpy’s Café Racers Billet Aluminum Rear Sets for the CB750 and love the fit and finish, the bike shifts like a champ and is comfortable to ride even on extended journeys, one of the best purchase’s I made, well other than the Yoshimura exhaust!, I rebuilt the carbs and jetted them to what Carpy runs on all his bikes running the Yoshimura exhaust, I started with Pod filters but have now changed out to a custom made one piece billet aluminum air cleaner. I’m sure I am forgetting a lot of stuff I did during the build but it has been a couple of years now. Having multiple bikes means the Café Racer doesn’t get ridden as much as I would like but I have to share my time among them or the other bikes will get jealous…LOL.

One thing about using Carpy’s Café Racers web store is the parts are tested and always excellent quality, shipping is fast and if you have any questions, Carpy himself will answer them. It was a fun time building the Café Racer and it draws attention everywhere I go.  It’s fun to come out of a store and have 2 or 3 guys standing around the bike admiring it. All I can say is….I don’t have a witness and I can’t prove it, but this is my story and I’m stickin to it….. 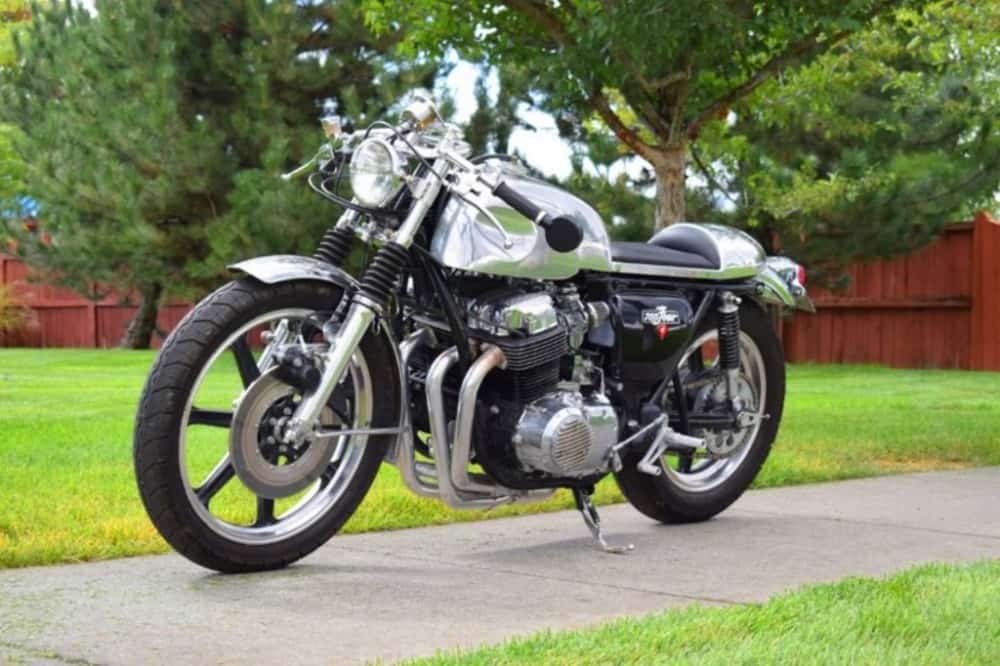