From the time Esquire first introduced America to the Varga Girl in 1940, the name Vargas has been synonymous with pinup and pinup art. 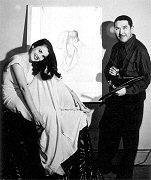 Born 9 February 1896 in Peru, Alberto Vargas was the son of a renowned photographer, Max Vargas, who had taught him how to use an airbrush by the time he was thirteen. In 1911, while accompanying Max on a trip to Paris, Alberto came upon the famous magazine La Vie Parisienne, and its sensuous front covers by Raphael Kirchner made a lasting impression on him. He studied in Zurich and Geneva before leaving Europe because of the war and arriving on Ellis Island in October 1916.

Vargas’ first encounter with America happened about noon at Broadway and Fourteenth Street, when he was suddenly surrounded by a lunchtime crowd of smartly dressed office workers. Mesmerized by their grace, sophistication, and beauty the young artist decided he would spend his life glorifying the American Girl. Alberto Vargas’ first job was drawing fashion illustrations (mostly in watercolour and pen and ink) for the Adelson Hat Company and Butterick Patterns. Eventually turning to freelance commercial illustration, he was painting in a store window in May 1919 when he was asked by a representative of the Ziegfeld Follies to show his work the next day to Mr Ziegfeld. Within twenty-four hours, Vargas found himself commissioned to paint twelve watercolour portraits of the leading stars of the 1919 Ziegfeld Follies for the lobby of the New Amsterdam Theatre. Yet, although he was in the company of the most beautiful girls in the world, he knew there was only one woman for him: Anna Mae Clift, a showgirl with the rival Greenwich Village Follies. For the next twelve years, Vargas painted all the Ziegfeld stars, including names such as Billy Burke, Nita Naldi, Marilyn Miller, Paulette Goddard, Ruth Etting, Eddie Cantor, and W C. Fields. He soon developed a friendship with Ziegfeld, who let the young artist call him “Ziggy”, a name used only by the impresario’s closest friends. In 1927, Vargas went to work for the Paramount Pictures’ art department in New York and was chosen to create the original artwork for the film Glorifying the American Girl, which was being produced by Ziegfeld. Working in an atmosphere of extraordinary harmony between artist, producer, and film, Vargas created advertising artwork that, aside from general distribution, also appeared in Paramount’s 20th Anniversary Book, published in 1927 for the company’s stars and executives. Vargas maintained a full schedule throughout the 1920s, working for a diverse group of clients in addition to the Follies and Paramount. He painted front covers for Tatler and Dance magazines, did hairstyle illustrations for Harper’s Bazaar, and even designed some countertop displays for Old Gold cigarettes. Yet he still found time to paint his favourite Ziegfeld Follies stars for his own pleasure, including the daring Shirley Vernon, whose 1927 portrait was preserved in his private collection.

Vargas and Anna Mae Ciift were married in 1930 and moved to Hollywood four years later. Twentieth Century Fox soon hired the artist to paint pastel portraits of their stars, as did Hellman’s Mayonnaise, which commissioned a series of full-length movie star portraits for their advertisements. By 1935, Vargas was working for Warner Brothers and, before the decade was over, for MGM. Vargas’ first calendar jobs were two pastel glamour pinups executed for Joseph C. Hoover and Sons between 1937 and 1939. He became an American citizen in 1939, the same year that he received an invitation from Esquire magazine to visit with publisher David Smart in Chicago to discuss the possibility of working together. Vargas was immediately hired as a replacement for George Petty, whose contract was to expire in December 1941. Agreeing to drop the “s” from his last name in all his work for the magazine, he had his first painting published in the October 1940 issue. Two months later, Esquire introduced the first Varga Girl calendar, which sold better than any other published up to that time. 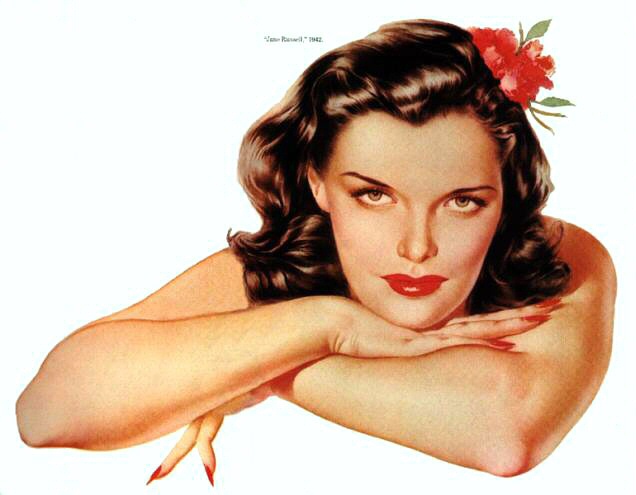 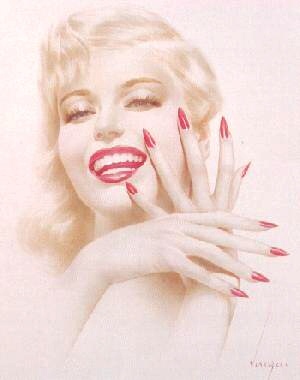 Over the next five years, Vargas became known worldwide, and his work, both in the monthly magazine and the yearly calendar, was eagerly awaited. Although he had a full schedule of work for Esquire during the war years, he often, accommodated special requests from soldiers to paint mascot pin- ups. Esquire also allowed Vargas to do a series of patriotic pinups for William Randolph Hearst’s American Weekly magazine, the only other magazine work permitted him during the Esquire years. 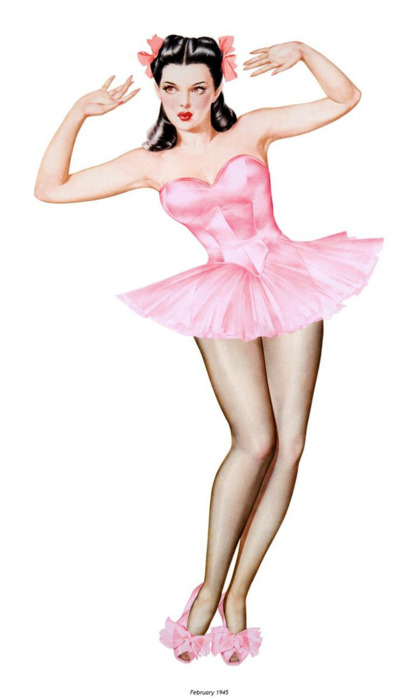 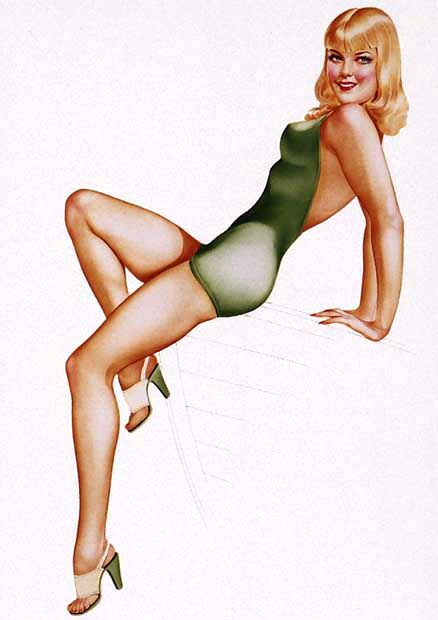 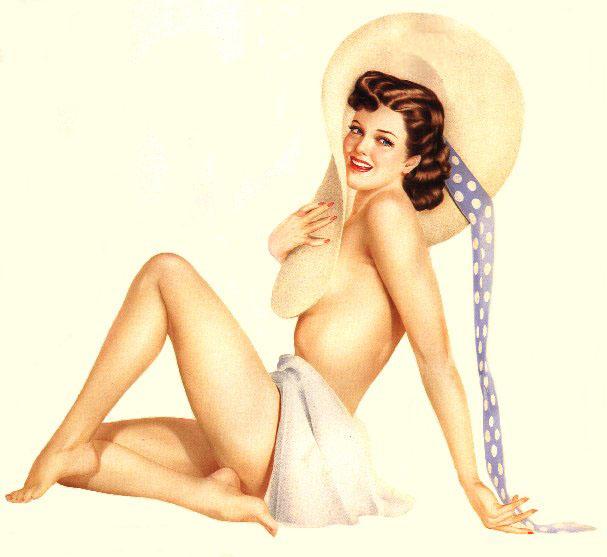 Vargas continued to paint Hollywood stars while he worked for the magazine. His 1941 movie poster of Betty Grable in Moon Over Miami was a great success; among the other leading ladies he painted were such stars as Jane Russell, Ann Sheridan, Ava Gardner Linda Darnell, Marlene Dietrich, Loretta Young, and Marilyn Monroe. 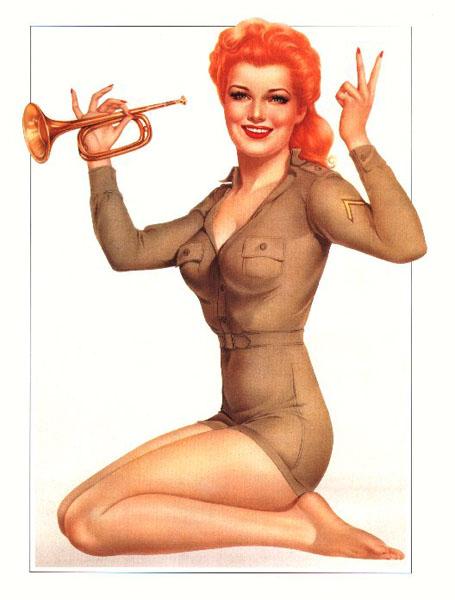 When Vargas and Esquire went their separate ways in 1946, the artist immediately embarked upon a project to publish his own yearly calendar. In the meantime, the magazine published an Esquire Calendar for 1947 that consisted completely of unsigned Vargas paintings. By the time Vargas’ 1948 calendar was published, Esquire had a court order barring the artist from selling or distributing any product bearing the name “Varga”, which the magazine had copyrighted. In 1950, a court ruled that Vargas would have to sign all his subsequent paintings with his full name. 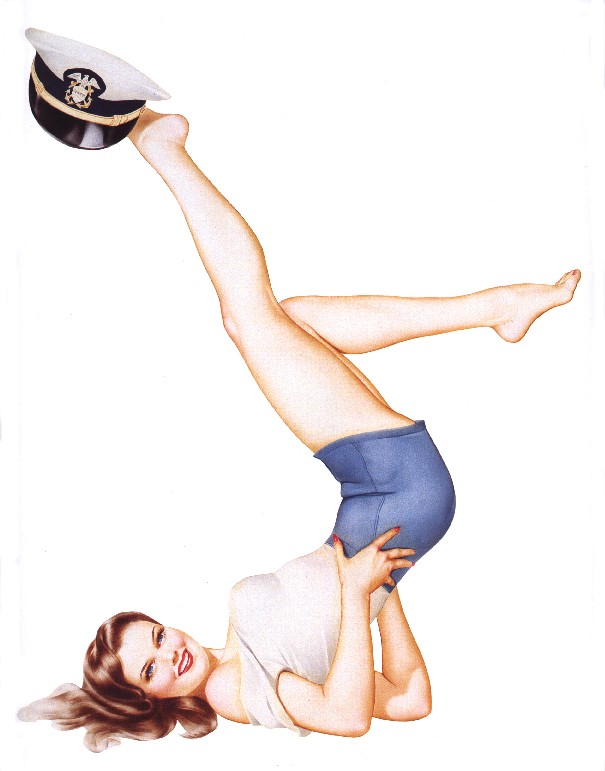 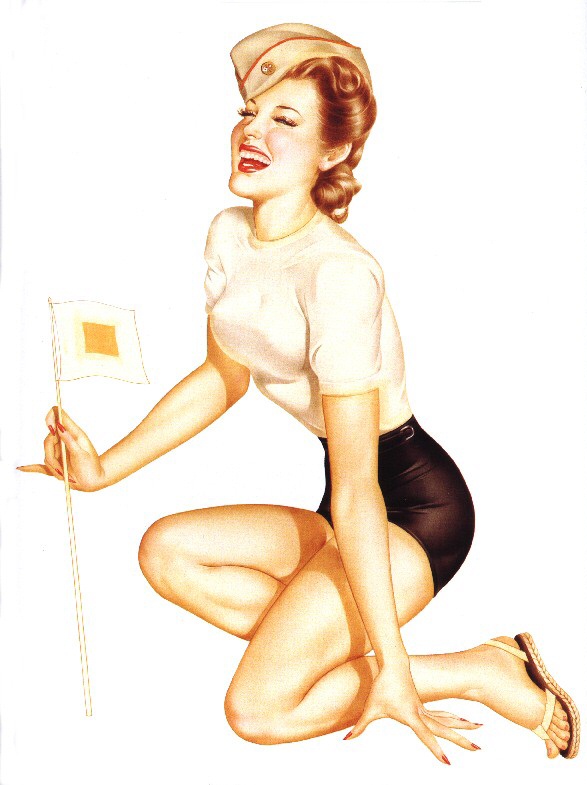 During the early and mid- 1950s, Vargas took on many commercial assignments, including a pinup of Shelley Winters for the RKO film Behave Yourself, a deck of Vargas Girl playing cards called “Vargas Vanities”, and a series of pinups for the pocket-sized British magazine Men Only. In 1957, Playboy magazine published a pictorial feature on Vargas’ nudes, which drew the attention of publisher Hugh Hefner In August 1958, Vargas and Anna Mae travelled to Lima, Peru, for a highly successful exhibition of his paintings. They were greeted upon their return with a personal invitation from Hefner to have Vargas’ work appear monthly in Playboy. 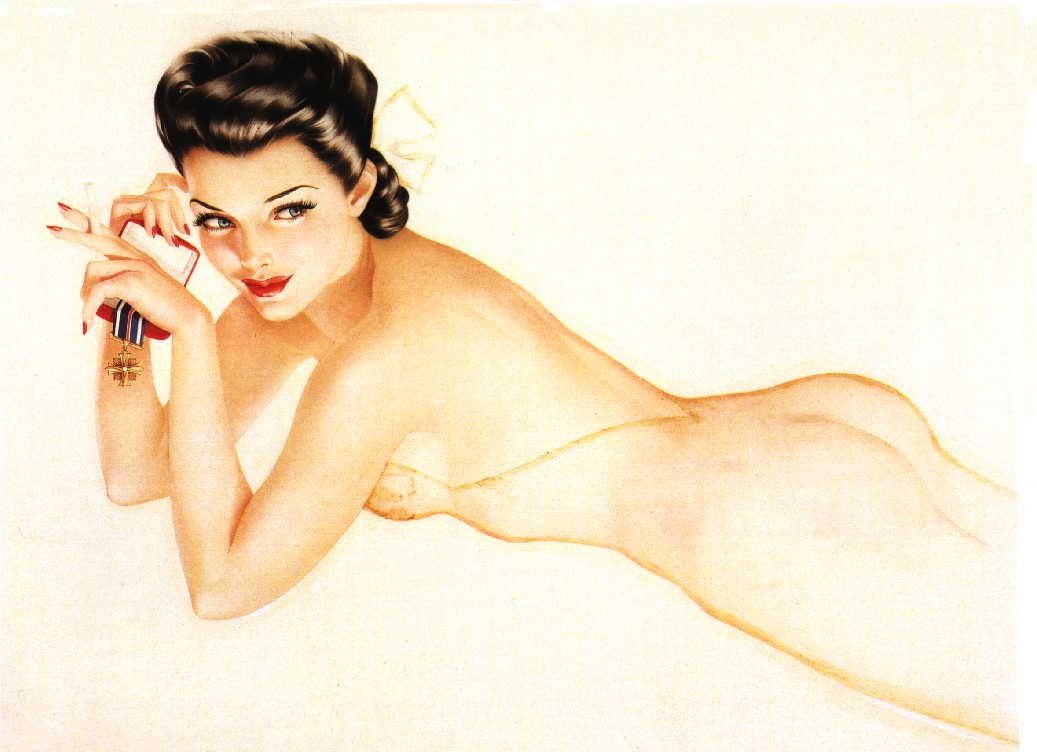 Embarking on this momentous association in 1960, Vargas was to paint 152 works for Playboy during this period, adapting to new moral standards and more explicit sexuality. Vargas painted only two front- cover images for Playboy during his long reign as the magazine’s primary artist: a cut-out figure of a girl in a bathing suit that was part of a montage created by art director Reid Austin in 1961 and the cover for the March 1965 issue. 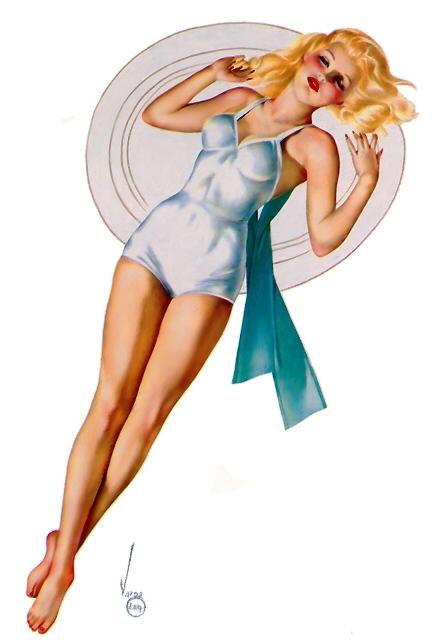 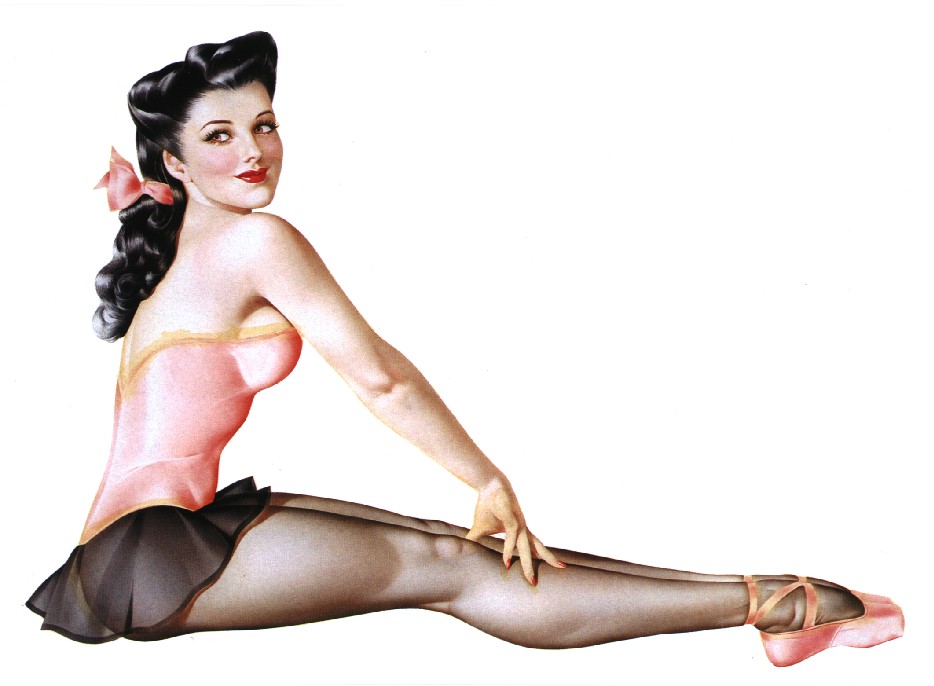 During the Esquire years, from 1940 to 1946, Vargas usually prepared a total of four preliminary studies for each published painting. Three of these were drawn on a fine tissue paper, the fourth on a heavy vellum parchment paper. The three tissues showed increasing detail from one state to the next until the parchment state which, because of the paper’s colour and texture, was almost identical to the final painting. These studies would often be drawn with the model as a nude, Vargas simply adding the clothing to the final painting for publication. At Playboy, Vargas did one tissue and occasionally a few, parchment studies for each published painting. 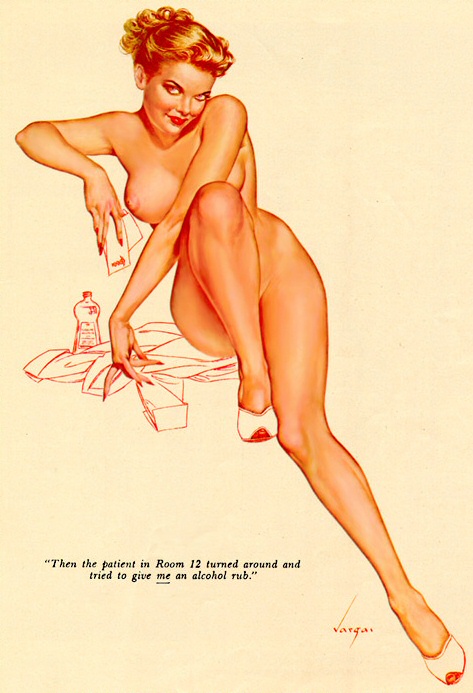 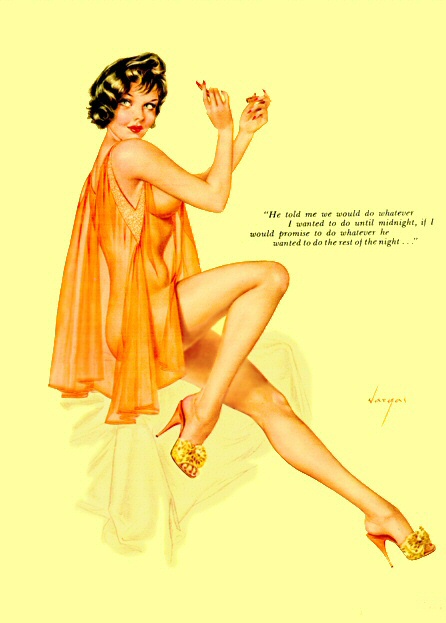 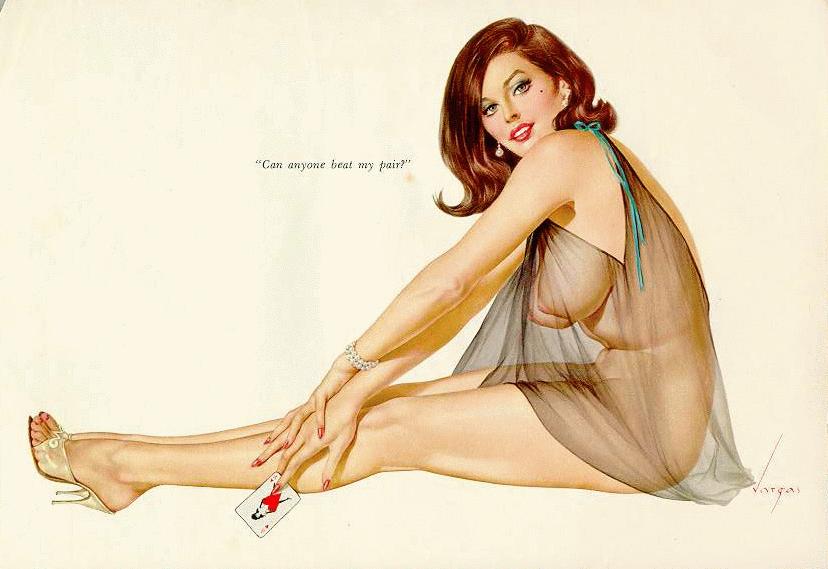 When Vargas’ wife passed away in November 1974, the artist lost much of his interest in painting and in life. Towards the end of the 1970s, he worked on an autobiography with Reid Austin, Vargas (Harmony Books). His career was revived somewhat when he painted an album cover, Condy-0, for The Cars; he also designed two other record album jackets for singer Bernadette Peters. He died on 30 December 1982, in Los Angeles. 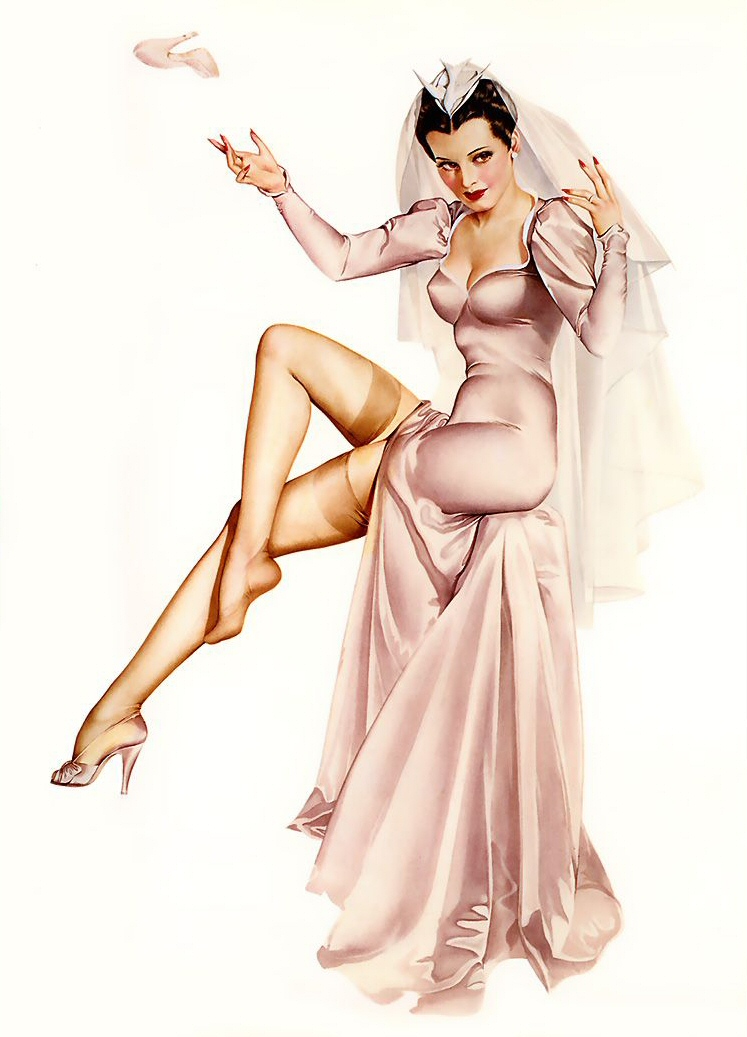 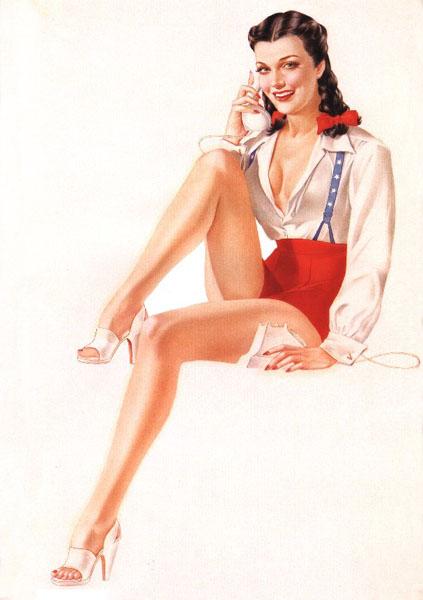