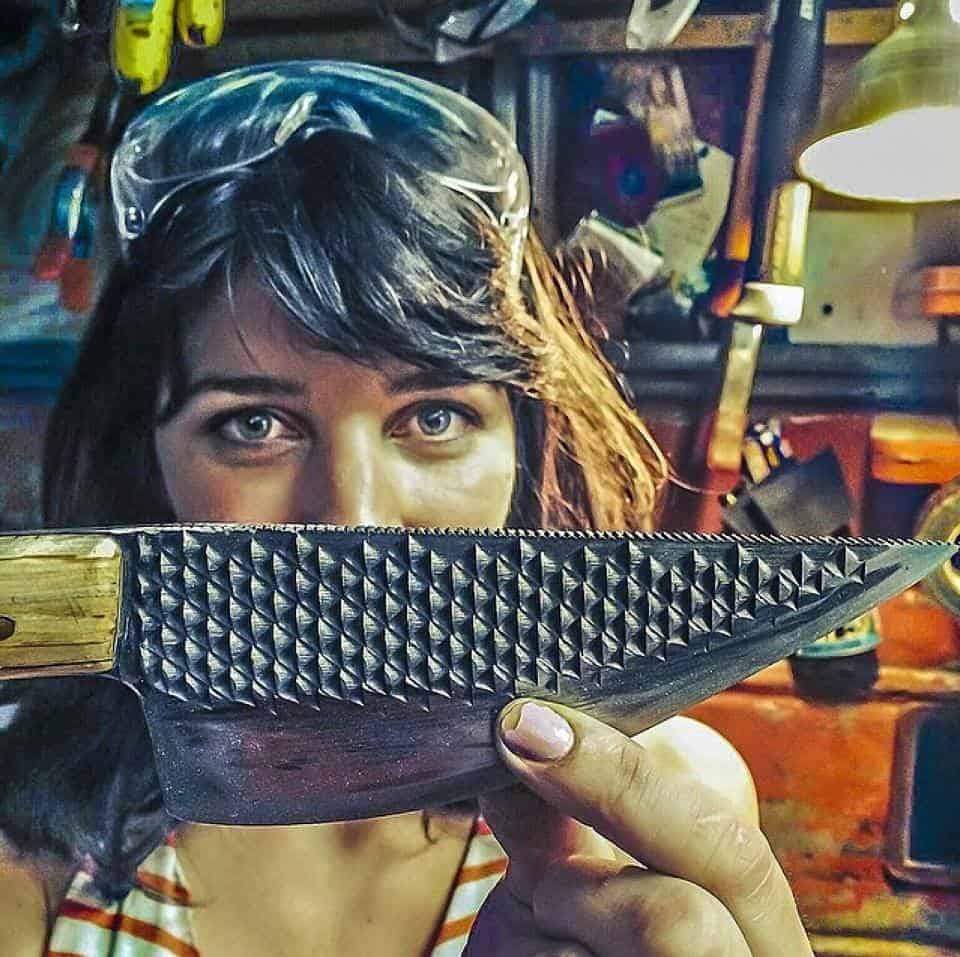 Well I am sure many of you have used a grinding wheel, sanding disc or belt sander to clean up some steel that you have, I always wanted to have a go at making a knife but always seemed to end up making something for the Motorcycle I was working on.

Now, young Dakota went on a Blacksmiths course and he loved it and when you see a finished item, it gives you a sense of satisfaction and pride from all that effort, time, sweat and hard work under a grinder etc.

Now take all this and when your father is a Blacksmith and Carpenter and have a daughter that loves working with Dad, well all I can say is “GREAT JOB GIRL”.

Below is an interview with her and then I added a bunch of very short videos so she can tell YOU her story. 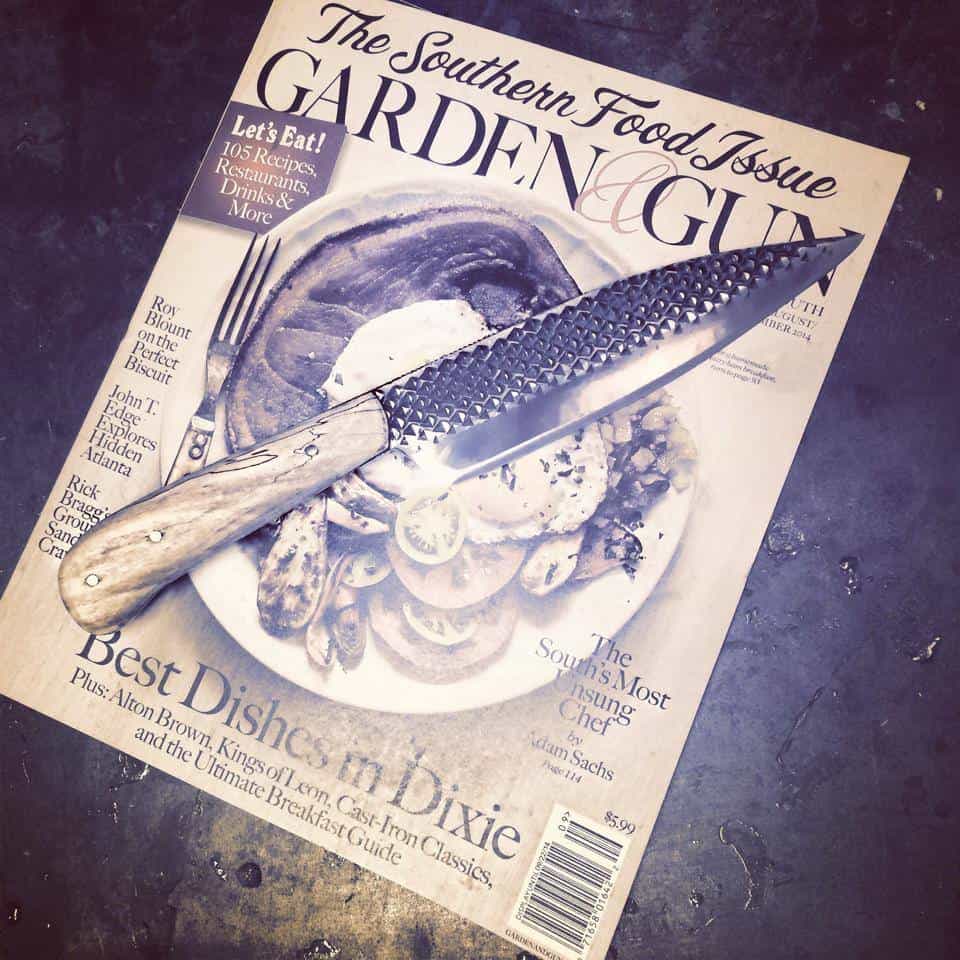 I’m Chelsea Miller and I make knives. Some of the world’s best chefs use her knives. Chelsea Miller: The chefs at Eleven Madison, Mario Batali, Massimo Bottura. Chefs who make some really, really delicious food.

Let’s say that. And they don’t come cheap. Chelsea Miller: My smaller knives start at $200, the largest knife, the chef knife are $800. I moved to New York when I was 18 and I was singing, dancing, acting, and as much as I love that kind of storytelling, I grew up in Vermont on a farm, home-schooled, my father was a blacksmith, and I was really missing that quality of working with your hands and that creative process. 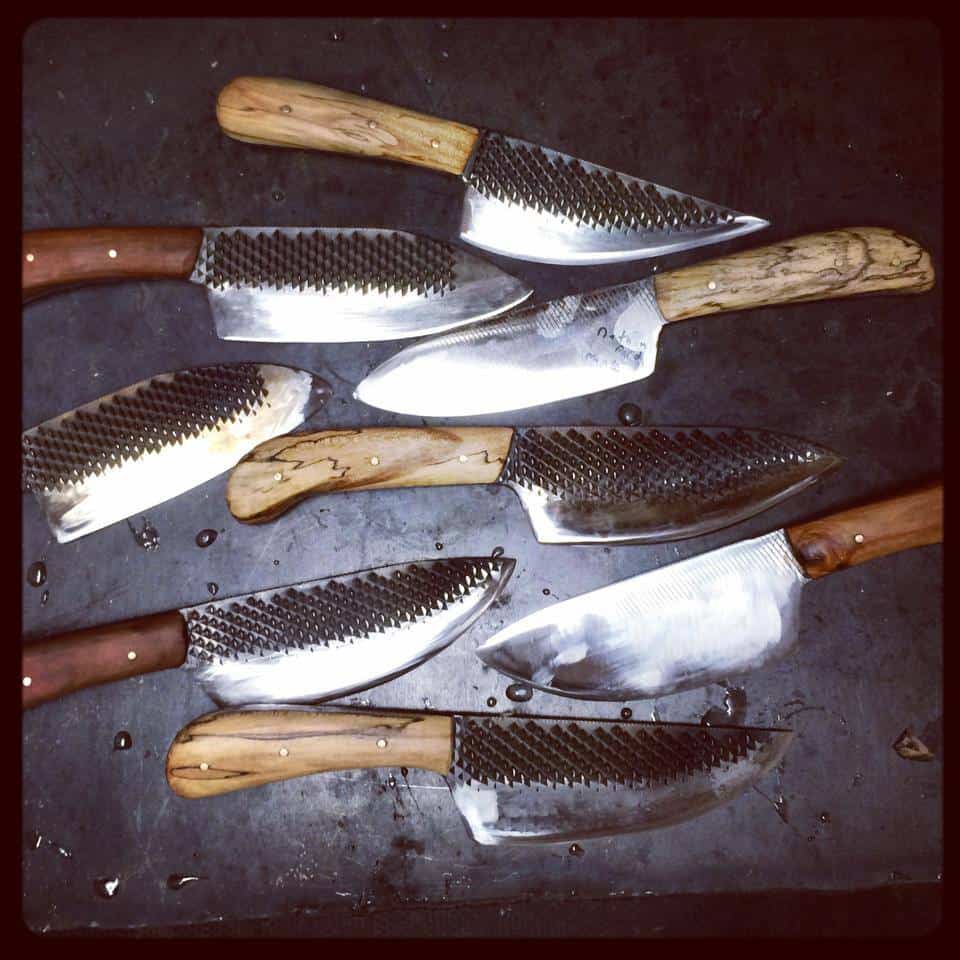 So I went home for a while at the end of 2011 and started playing around in my father’s shop. These knives came out of that exploration. My friends encouraged me to take out a booth at the Brooklyn Flea and the Brooklyn Flea is an incredible place to be as a creator because there’s an incredible amount of foot traffic and a lot of high profile writers, photographers, chefs. And that’s how I got my first publications in Saveur Magazine and The New York Times and it really blew up from there. Most of all my knives have a grater on the side, which is very unique because I’ve never seen a knife with a grater, but also that is the original function of the original material that I make it from. 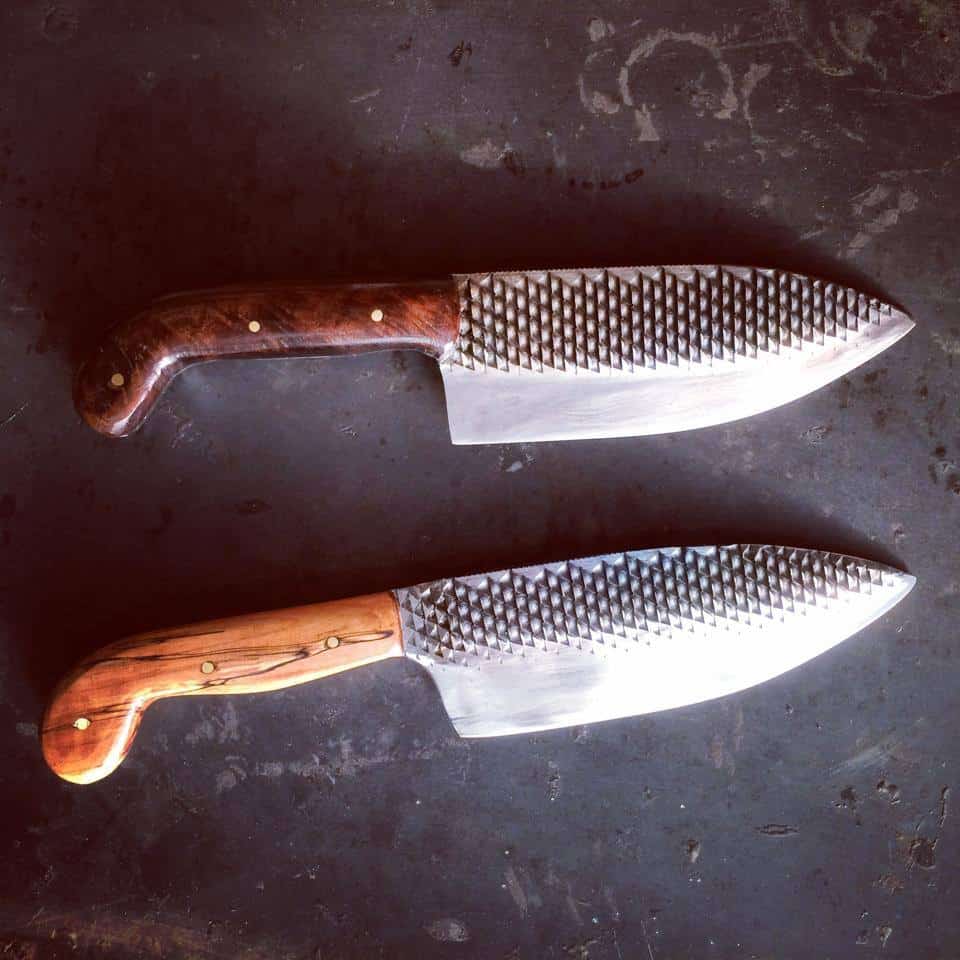 They’re made from horseshoe rasps which have that rasp on the side that was originally used for filing horse’s hooves. So in my mind, I thought, “Why take that away?” We can incorporate that into this new tool. Since I’ve started my own business, I’ve noticed a real progressive movement towards more and more and more handmade things and a lot more consciousness about where you items are coming from. 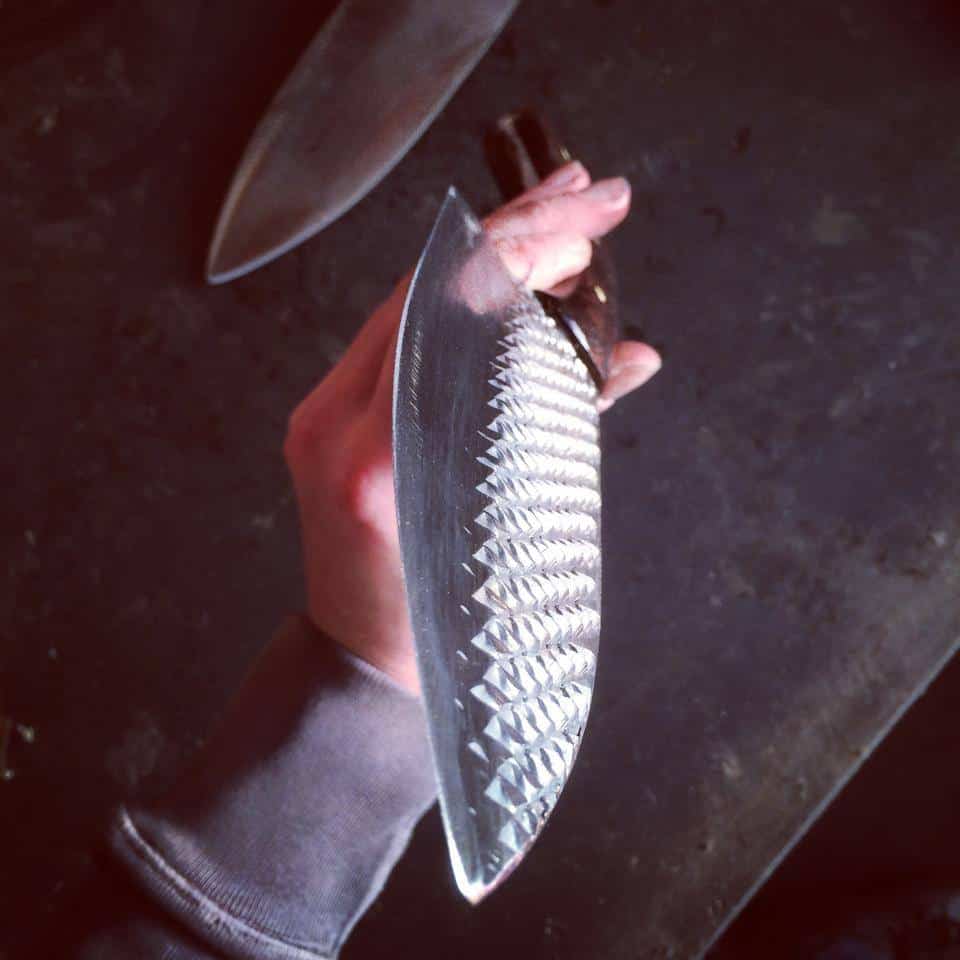 Trying to buy things that are going to last you your lifetime instead of something that’s meant to be thrown away the second you open it. I leave a window of about three to six months. If I were making one knife at a time, that would take me a couple of days, but because I have so many I tend to make them in batches, so as many as I can, I start from the beginning process, maybe 10 knives at the same time. Also other Flatware is available now. 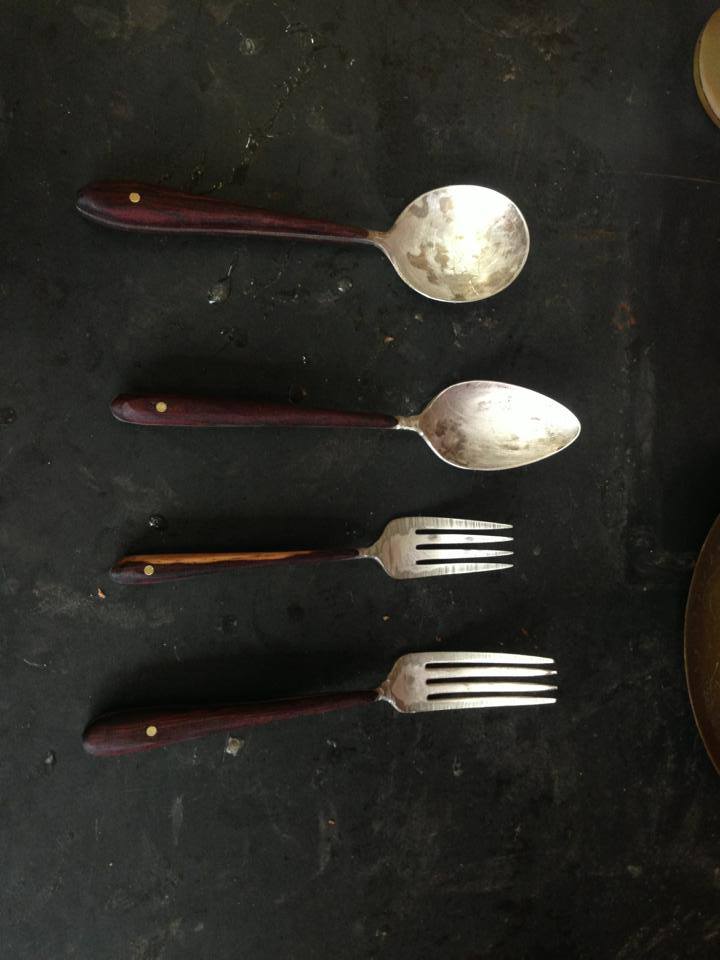 So for a few weeks I’ll be working on those first initial processes on those knives altogether. Then I’ll move on to the next stage. I use the forge for all of my smaller knives and essentially what we’re doing is we’re heating the metal and then using the hammer to hammer out the metal, lengthen the metal, to give us a longer, smoother material. And I don’t do that with the chef’s knives because I want to leave that grater on the side of the knife. So with the larger chef’s knives, I’ve already cut out the pieces in Vermont with an oxy acetylene torch and then once I get them here, I start the stock removal process. 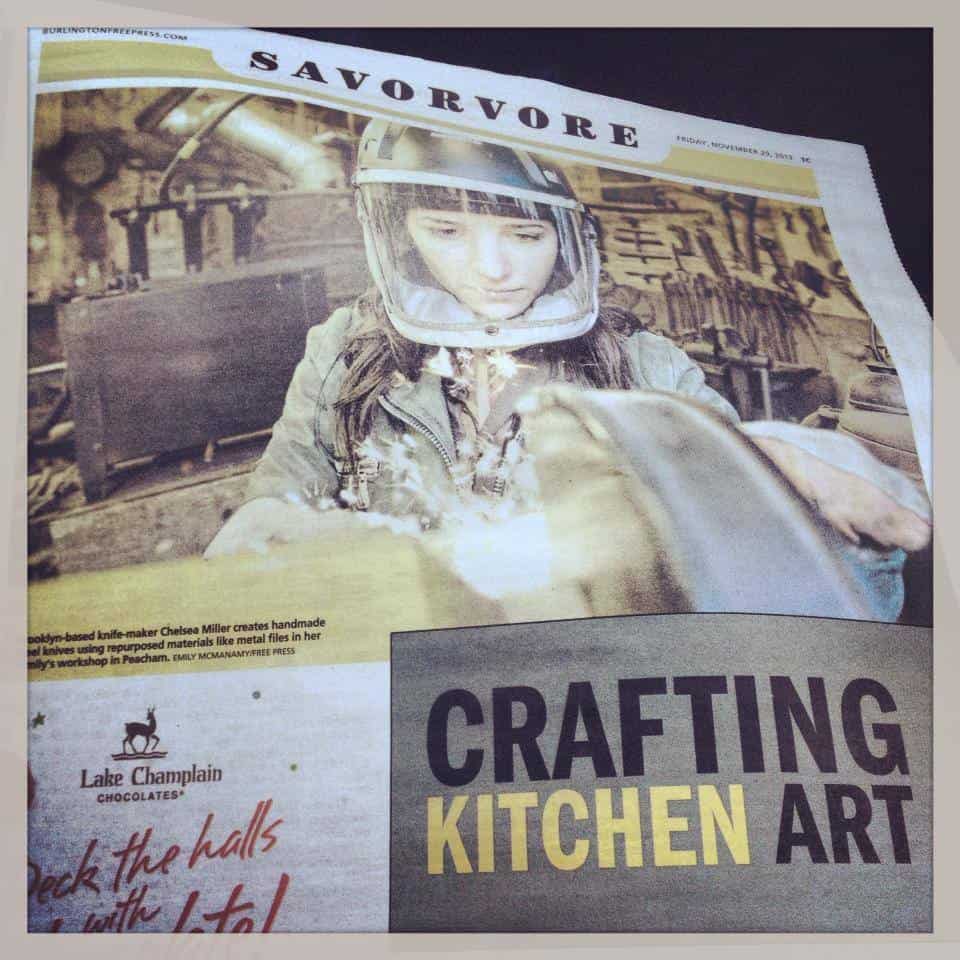 So I start with my bench grinder, grinding away the excess metal on one side to leave the grater on the other. And then I’ll move to my belt sander, and using a series of belts that go from very coarse to very fine, I’ll bring that blade down to a fine edge and make it all shiny and smooth and sharp. Each piece, depending on the way that it looks, it calls for a different piece of wood. 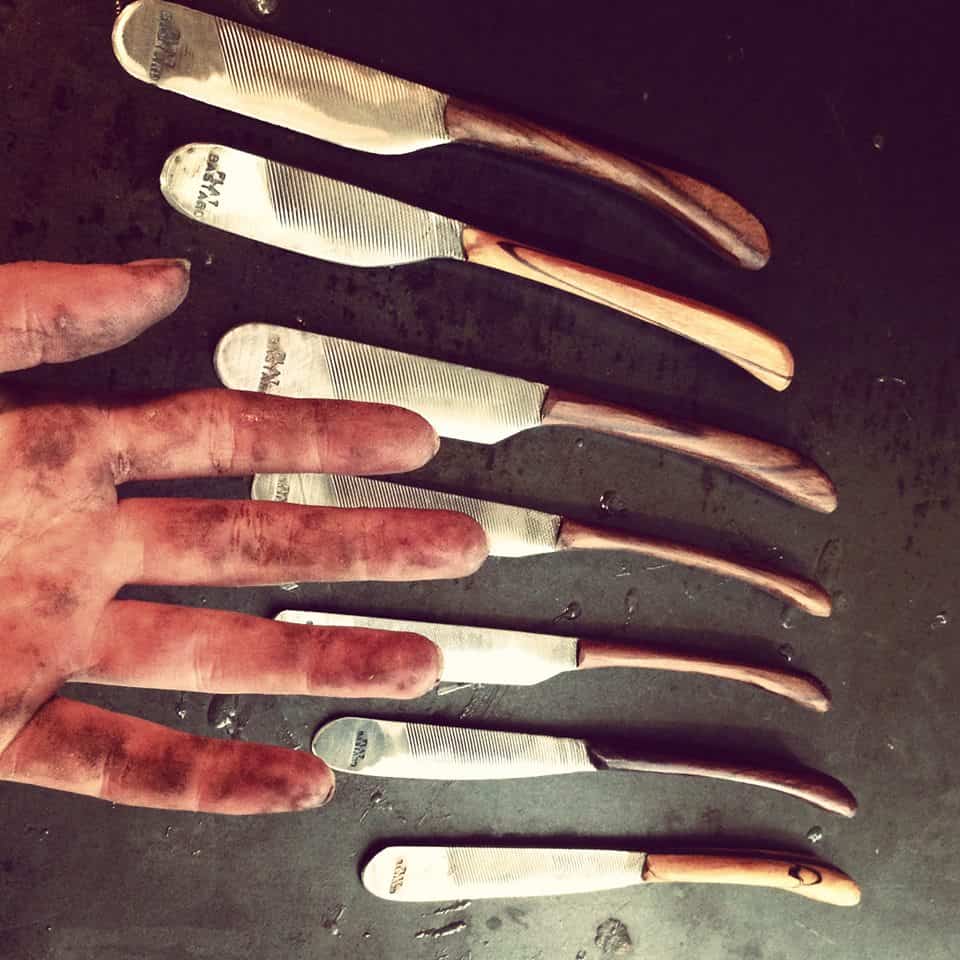 So I’ll shuffle through a lot of wood to find the right wood for the right knife. And we’ll cut out the wood, we will sand the handle a little bit, then we’ll drill the holes, glue it together, clamp it, and then wait for it to cure.

I usually let it cure for about 24 hours. Then we’ll take that off, sand the handle down, all the excess glue off the edges. And then we’ll put a final sharpen on the blade, oil up the handle, and it’s ready to go off and cut some vegetables. ————————————————– Follow BI Video on Twitter: http://bit.ly/1oS68Zs Follow BI on Facebook: http://bit.ly/1W9Lk0n Read more: http://www.businessinsider.com/ 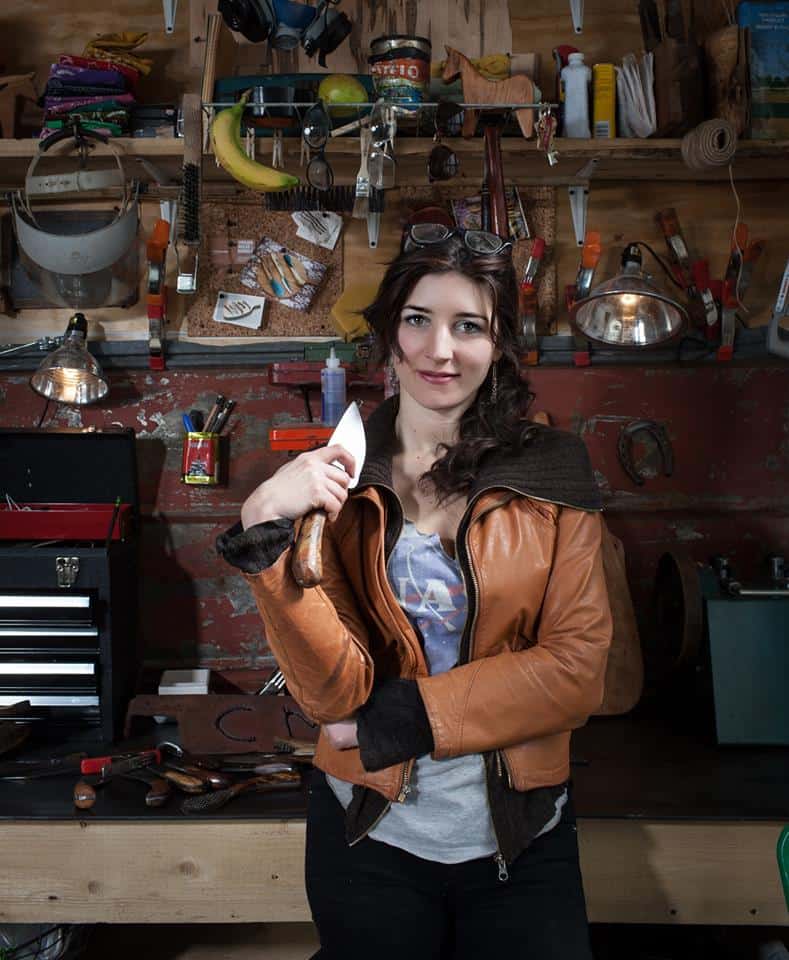