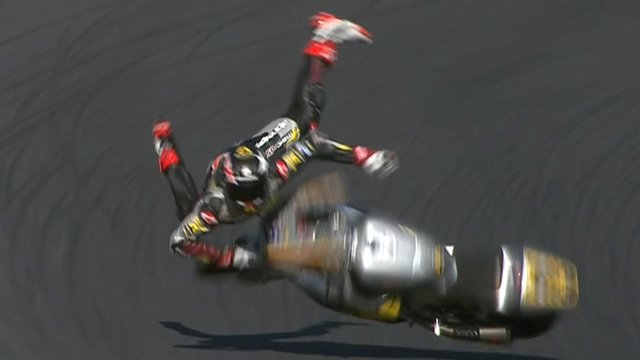 The Marc VDS Racing rider broke his left wrist in a high speed qualifying crash and the injury will require surgery in Melbourne this evening that will rule him out of tomorrow’s race.

Redding was transported to Epworth Hospital in Richmond where he was due to undergo surgery at around 10pm local time this evening.

The 20-year-old is almost certain to be ruled out of next weekend’s Japanese round at the Twin Ring Motegi, meaning his title chances have suffered a huge blow.

The Gloucestershire rider would have started tomorrow’s race with a nine-point lead over Spanish rival Pol Espargaro.

But he will not start a race shortened from 25 to 13-laps after a new Phillip Island surface caused major tyre wear issues for official tyre supplier Dunlop.

A decision on the likely date of Redding’s return to racing will be made together with the medical staff at Epworth Hospital after the operation this evening.

Marc VDS Racing team boss Michael Bartholemy told MCN: “If this does cost us the championship after all the hard work we have put in for the past four years it will be very tough to take.”

In an official team statement, Belgian boss Bartholemy said: “Obviously I am absolutely gutted for Scott. He was pushing hard and the rear just got away from him. Normally he’d have dusted himself off and put it down to experience, even at the ultra-fast turn 12, but he was unfortunate in that he got caught up with the bike and ended up with a fractured wrist. The most important thing now is that he recovers properly before making his return to racing. Yes, there’s a championship to be fought over, but our priority now is Scott’s health. If that means we have to forfeit the championship then so be it.”

WE wish him a speedy recovery as he and the team worked so well to get where he is, so sorry to hear about your accident Scott.
The penultimate round in Japan takes place next weekend. Redding will move to MotoGP with Gresini next season.
https://twitter.com/Reddingpower