Sometimes a machine will come along and your jaw will drop to the ground, hitting the concrete with an undeniable Thud! You get Starry eyed and begin to sweat profusely, and today is that day, I mean, first of all just listen to this Motorcycle, what an awesome piece of work.

Another style thats new and old at the same time, artistry at its most excellence, I have not seen a motorcycle that personifies engineering beauty such as this Deutschland machine.

I dont have any good shots of this, so am going to leave it up to BIKE EXIF to show you what they thought when they went out to see this great contraption of 2 wheeled ingenuity and am sure you will be picking your lower lip up off of the floor too. THERE ARE ONE hit wonders, and then there’s Dirk Oehlerking. The German custom builder can’t put a foot wrong, churning out hit after hit from his Kingstom Custom garage.

There’s one Kingston classic BMW in particular that really left a mark on the scene: an R80RT with intriguing bodywork, dubbed ‘White Phantom.’ Dirk has now followed it up with an even more impressive, broodier sibling, just to prove that he can; meet ‘Black Phantom.’ The idea was sparked when BMW staffers Ola Stenegärd (now at Indian), Christian Pingitzer and Roland Stocker told Dirk it would be impossible to improve upon the White Phantom’s design.

“I never intended to top the White Phantom,” he says. “I just wanted to provide the bike with a companion—a sibling. White and Black, two that belong together, like Yin and Yang. Phantoms that appear from nowhere, that take your breath away, and then disappear again.” For starters, he set out to build it without any elaborate frame mods—so that meant no cutting, grinding or welding. He also decided to stick to BMW parts wherever possible, and to limit the use of high-end tech. 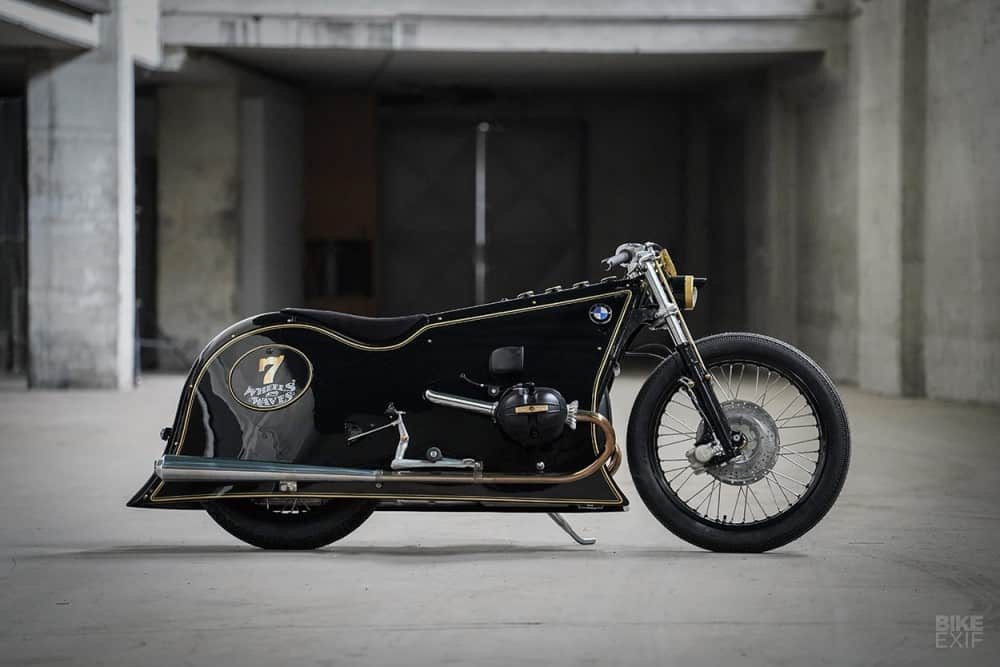 Since Dirk’s wrenched on countless classic BMWs, he’s amassed a collection of leftover parts. Every BMW component on the Black Phantom was salvaged from his own workshop, and dates between 1951 and 1979.

The rolling chassis is an unmolested BMW R75 frame, mated to an R80/7 final drive and R80RT shocks. BMW R100RS forks have been grafted on up front, and modified with a skinny external springer system. (They’re also sporting the fork brace from an R75/7). Powering the Black Phantom is the air-cooled boxer motor from a BMW R75. It’s hooked up to a five-speed R80/7 transmission (to match the final drive). The carbs are Bing 32s, but you’d need to lift up the seat to identify them: they’ve been relocated, and are now connected to the heads via custom tubing. Elongated Hoske silencers add an extra dose of class. 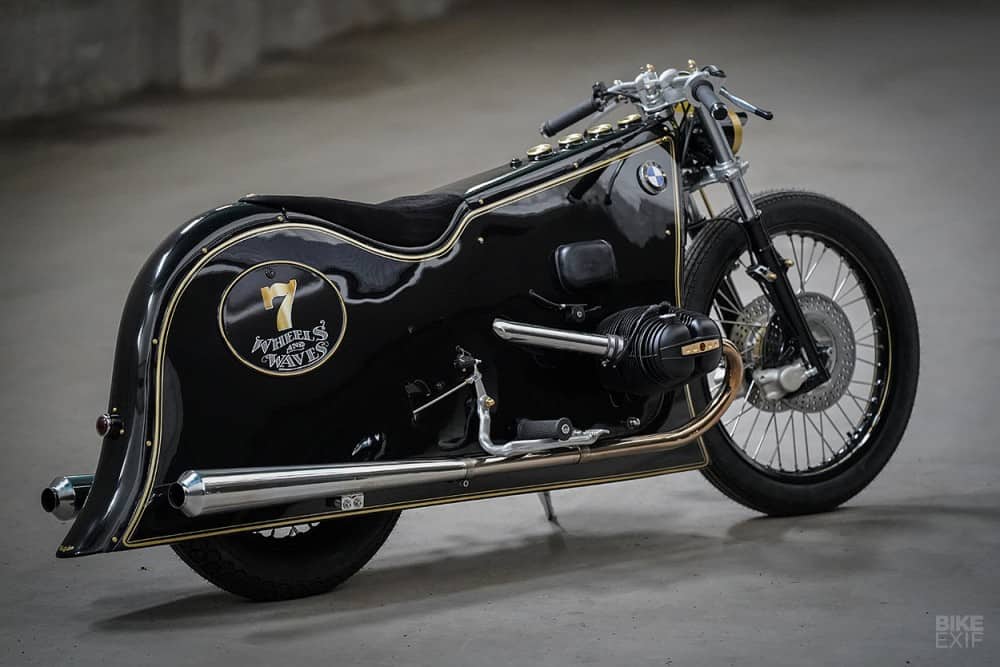 But it’s the hand-formed bodywork that steals the show. Unlike the White Phantom, the Black Phantom’s shell extends all the way to the back, enclosing the rear wheel. It’s all been shaped from 2 mm thick aluminum, and it’s loaded with little details from front to back.

Up front, there’s a cutout for the engine, and a pair of beautifully crafted ducts. On the sides you’ll notice a pair of mesh-covered intakes, and you can even spot a Magura choke lever mounted on the right side. Unscrew a single brass fastener, and the leather seat flips up to reveal the carbs and battery. 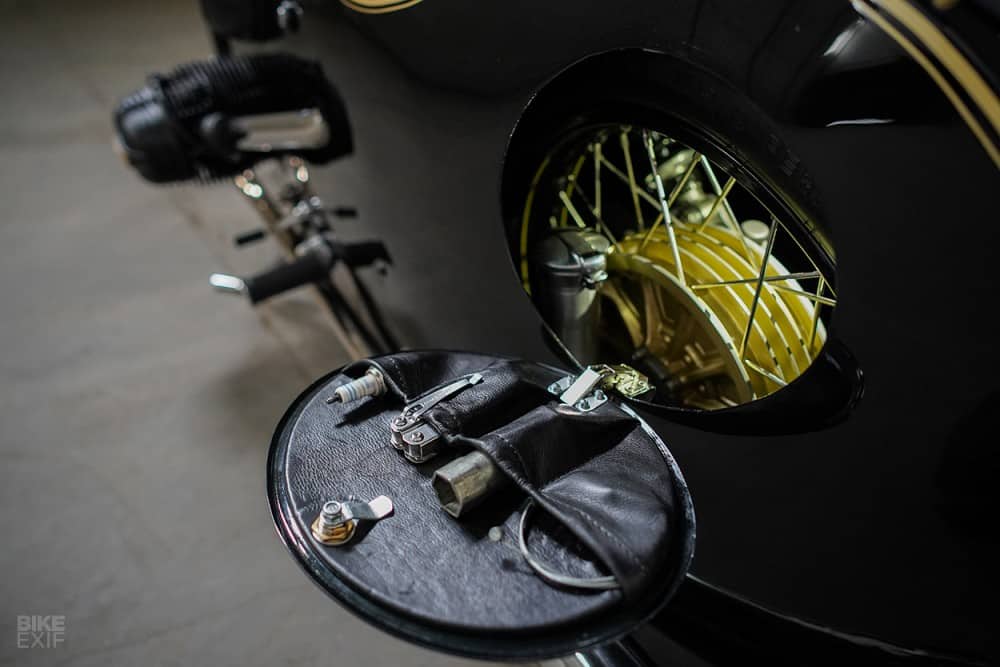 There are more hidden gems behind the rear number boards. Both of them are hinged, and open up to reveal leather tool pouches.

Opening the left side also gives you access to the fuel cap. The actual fuel tank is a one-off aluminum unit, mounted low down and good for 15 liters. Dirk’s installed a new fuel pump to get the gas where it needs to be. 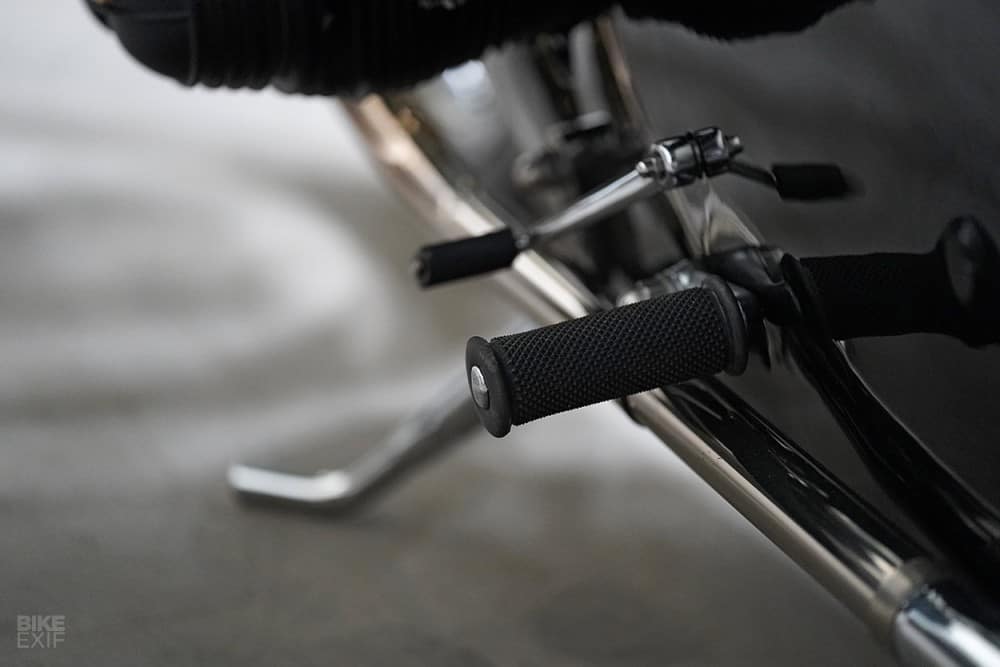 The Black Phantom’s finishing kit is a mix of more Beemer parts, and a few choice aftermarket goodies. The foot pegs and controls, brake light switch, handlebars and ignition are all from various boxers. The clutch and brake levers are universal aftermarket numbers, and there’s a pair of motogadget bar end signals.

Dirk turned to MMB to create Black Phantom’s very own set of custom dials. Up top, you’ll find a speedo, tacho, oil pressure gauge and voltmeter. On the sides, there’s a pair of original R51 roundels, backed by LED rings. As for that tiny screen above the headlight—it’s a yellow replacement goggle lens. 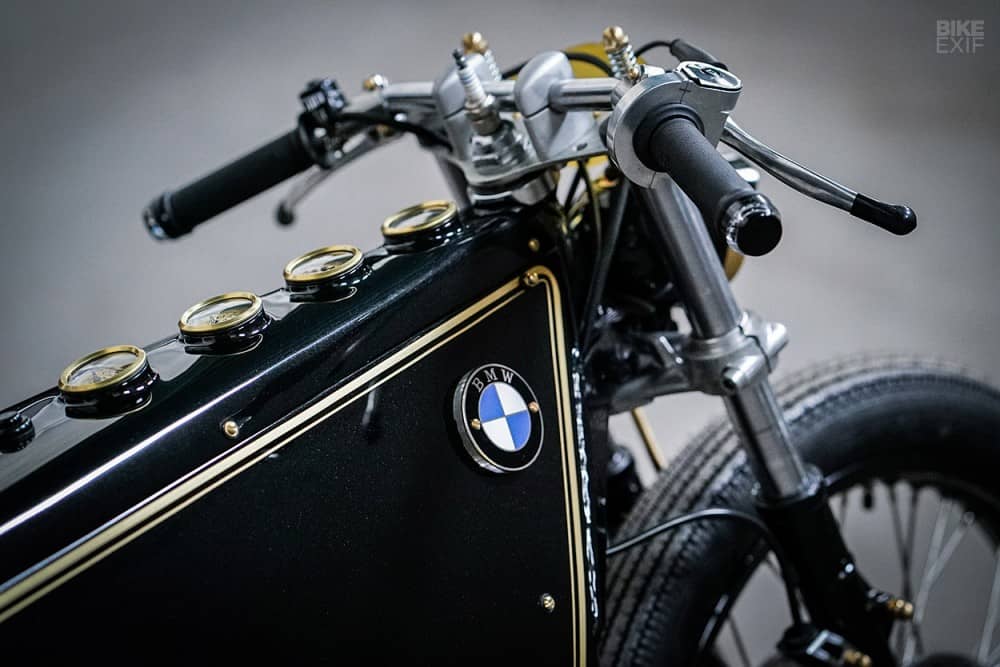 The livery is as timeless as it gets: black, with gold pin striping and brass details throughout. The whole package feels like an art deco concept dragged from the Bavarian marque’s archives. But it’s actually the product of one man’s imagination—and his blood, sweat and tears.

Dirk’s just unveiled Black Phantom at the Wheels and Waves festival in Biarritz—in front of Ola Stenegärd and a host of other industry luminaries. Hopefully they’ll tell him he can’t build a third Phantom—just so we can see what he produces.