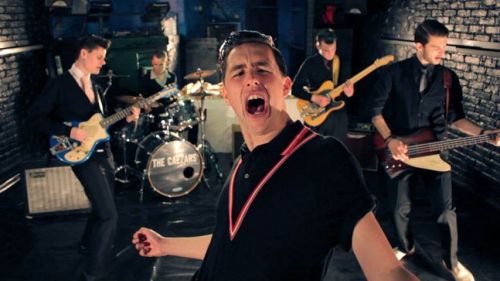 Hey all
Well its Hump day and just in case that your flame is slowly burning out, here is a little more petroleum to fuel that flame back into a fire, this should at least help you get through the day and get your toes and fingers a tapping.

Try and support your local bands as its that of which keeps them going and hopefully one day will get them a recording contract.
So first up here is , The Hell Bound Hep cats.

Now we cross the pond to Australia to hear Wes Pudsey and the Somic Aces bang out ” My baby looks like Betty Page.

Some Swedish Music here, a little too pop Music but they still have a great stage presence and Bass line but worth watching.

One of the First bands I ever saw back in 1982 back home in the UK and still Rockin it today, here is the infamous Blue cats and “Billy Ruffian”
Just to explain what Billy Ruffian is:
HMS Bellerophon was a 74-gun third-rate ship of the line of the Royal Navy. Launched in 1786, she served during the French Revolutionary and Napoleonic Wars, mostly on blockades or convoy escort duties. Known to sailors as the “Billy Ruffian”, she fought in three fleet actions, the Glorious First of June, the Battle of the Nile and the Battle of Trafalgar, and was the ship aboard which Napoleon finally surrendered, ending 22 years of nearly continuous war with France.

Here is some strange Zombie Video that i thought would grab your attention today via Kitty In A Casket: Kreepsville 666.

Here is a different version of train kept a Rolling by Sandy and the Wild Wombats.

Sandy Lee and The Wantons – Wake Up is a great Bass song with a Classic twist.

Something a little different as a Mixture of Rockabilly, Country and Folk and this is a good song to be honest.

The Beat Devils – Night Falls Down

Now lets give this a little Hot Sauce but at a slow pace, something you dont see but hear a lot and this is something unusual but for some reason I find it entertaining, warm and fun to watch, up to you but I dig the look.

CHILLI CON CURTIS – This Is Your Life

From Back home a little taster.

Happy Wednesday hope you liked it.