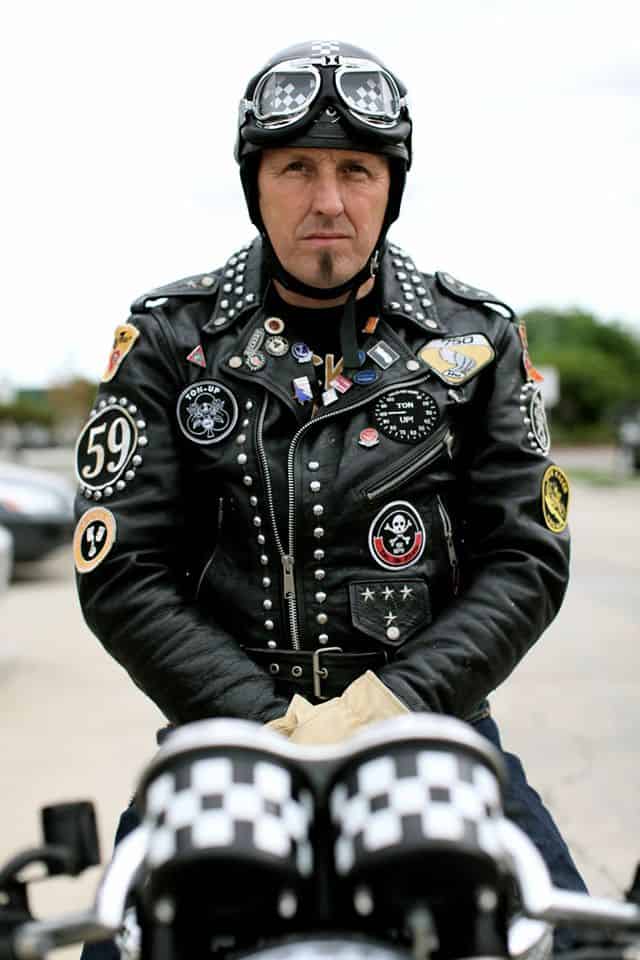 Well, 17 years seems to have flown by and here I am, still playing with two wheeled contraptions.

As a kid , I was fascinated with Motorbikes and at any opportunity I would drop everything to watch , hear or just read about these mechanical machines.

I have lived all over the world and seen some fantastic motorcycles and knew that one day I would be lucky enough to reside in the United States of America .

So, in 2000 I entered California and the first Motorcycle I created was a 1976 CB750 of which I gave the Cafe Racer styling. 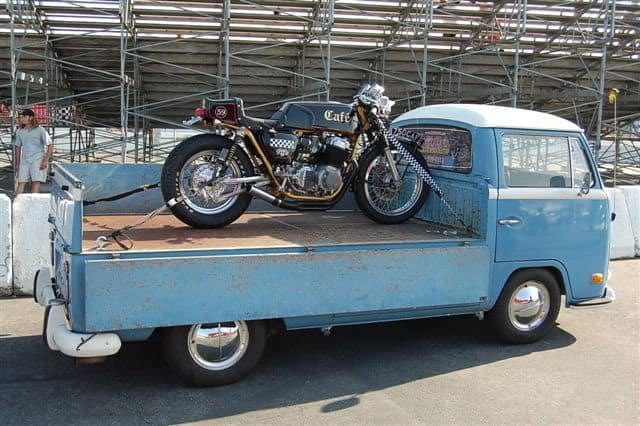 The livery was in the style of the 1970’s Formula 1 John Player Special Team of Gold and Black. 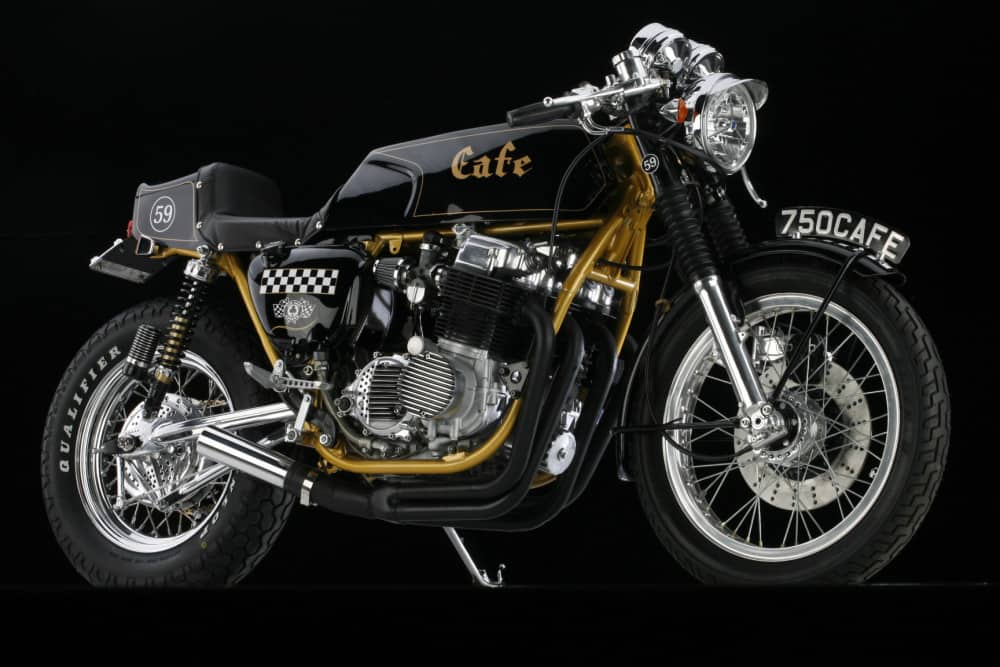 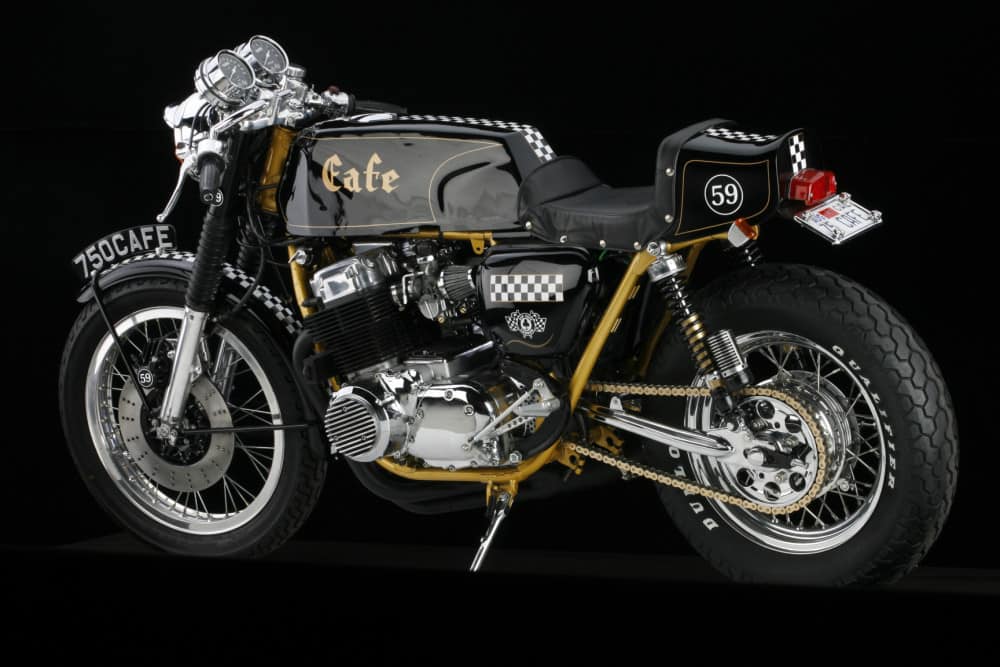 This motorcycle caused a huge stir in the American Motorcycle community and put me on the map as as Motorcycle designer and builder. 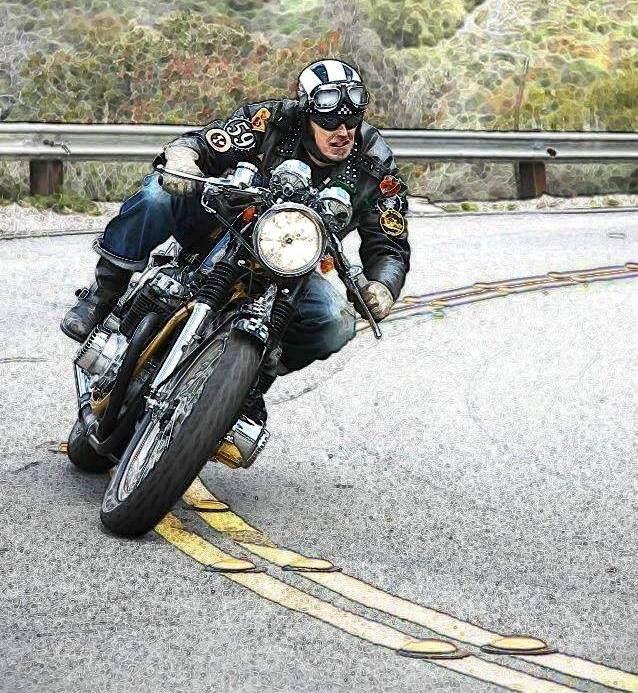 17 years later and my 50th creation is almost completed , I wanted to build another CB750 and this time use some crazy Candy flake colors of which covered most of the Hondas of SOHC guise. 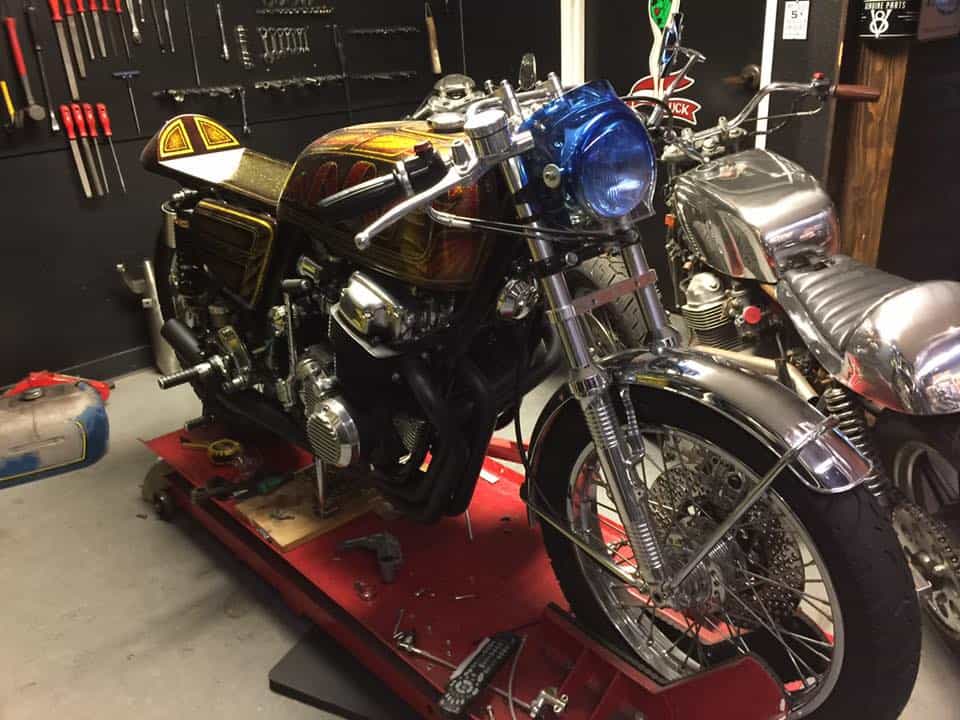 This time I chose a 1975 CB750F model Super Sport and went with a Black Wrinkle Finish Engine, Dressed out with Stainless Steel Allen Head Bolts throughout. 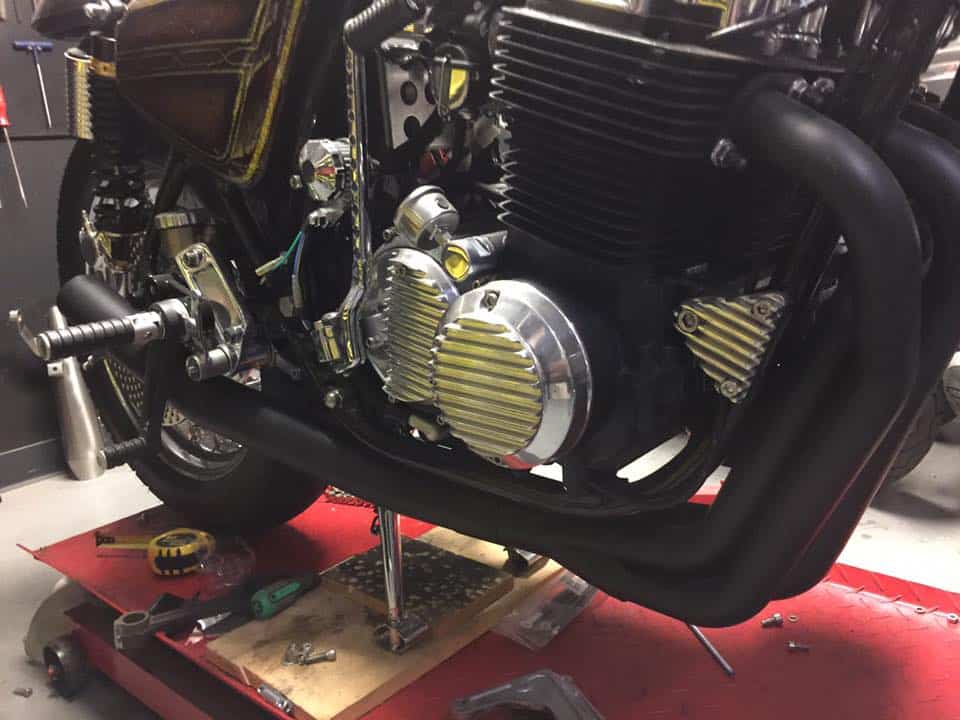 I also designed a Brand New 4 into 1 Exhaust System that made the Header pipes swing out to the right hand side and then tightly under the chassis and a unique short turn out tail pipe. 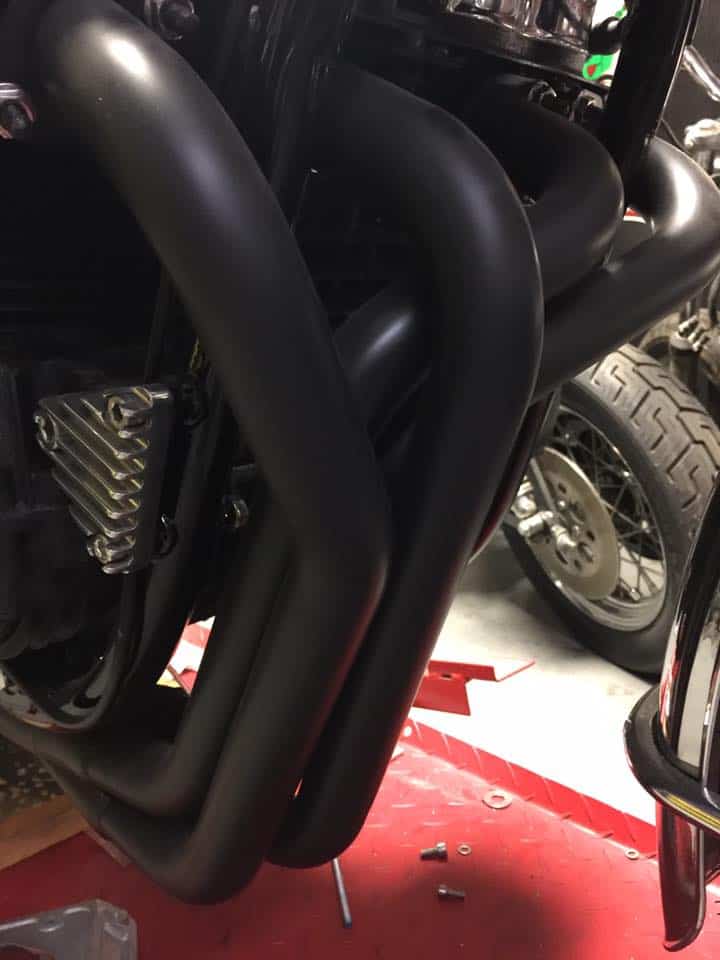 I took the stock gas tank and cut out the filler neck and welded it flat, then welded a Harley Gas Cap bung in its place to give this tank a cool smooth appearance . 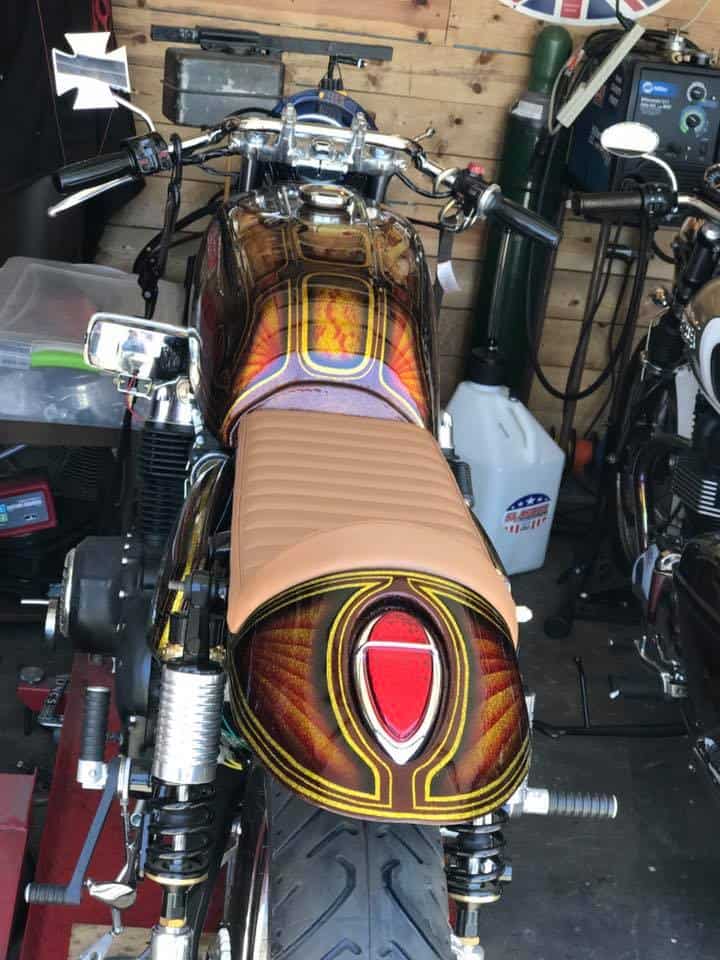 Next up I took some 18 Gauge steel and hand bent the seat base to the style I was looking for, then I cut another piece of steel into a half circle and hand pounded it on a sand bad and then used my Air Plenisher and shaped it into a cowl, then tig welded to seat base, once that was done I then cut a teardrop shape out of the rear of that cowl, to allow for a unique Tailight for the bike.

I upholstered this seat base with Brown Naugahyde and did tuck n roll design. 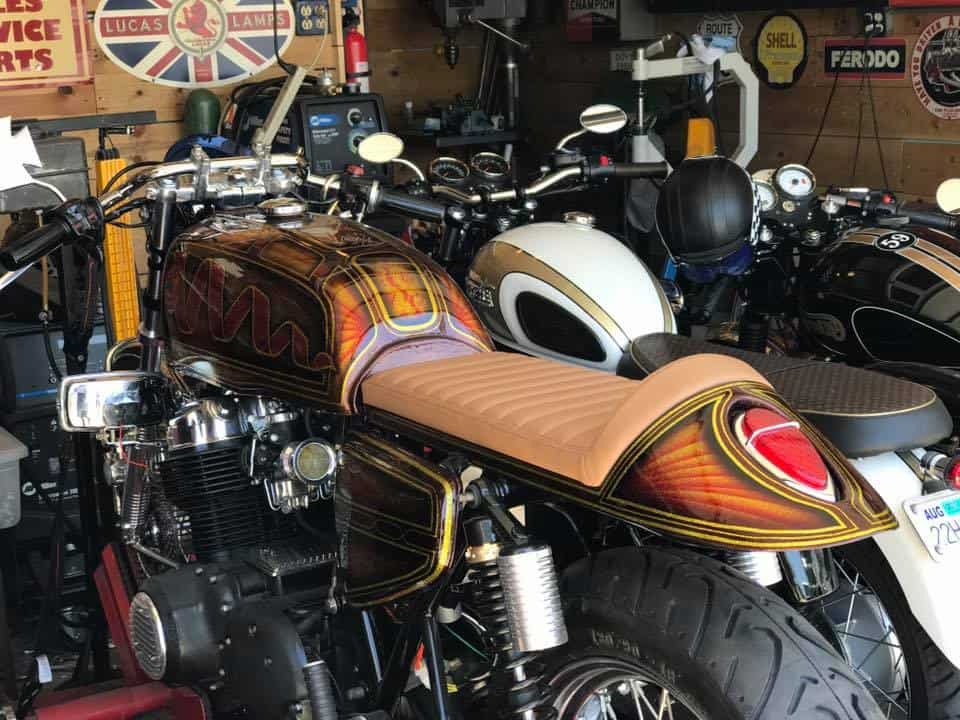 With 14.5 inch New Shocks makes sure the rear end keeps smooth and some Italian Rear sets clamp tightly to the frame. But still More to do and wanted to show you some progress photos, Hope you like what I am doing here, a little out there but, that makes it more fun. Stay tuned to my Blogs on more as I will ALWAYS be messing around with 2 wheeled Machines. 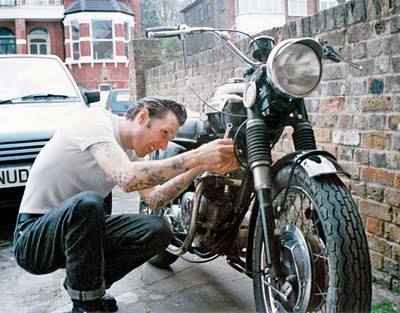