Betz, who lost his right leg below the knee to polio at age 3, grew up  on a 10-acre orange ranch on Lemon Street in Anaheim.

But Betz wasn’t interested in ranching or learning his father’s skill as a hybridizer of orange trees and other fruit bearing plants.

What really caught his attention, and kept his interest for the rest of his life, was cars. And he had a great role model to encourage him.

His uncle Dick Kraft, one of the original hot rodders, was known for his many innovations, which included building and driving the first rail job called “The Bug.” A clone of “The Bug” is on display in the National Hot Rod Association Museum in Pomona. Kraft’s other custom-built cars are highly collectible.

Like his uncle, Stan’s cars have become famous in the automotive world and are shining examples of his legendary skills as a master car builder and painter.

His journey to becoming the center of the 1950s rod and custom culture, as well as a businessman who figured out a way to make money at doing something he loved, included a stop at Anaheim High School.

A 1946 grad, Betz confesses to having spent most of days at Anaheim High in the machine shop working on hot rods. He owned a Model-A roadster with a V-8 engine that was shoe-horned in during welding shop. Three years later he built a track T that he raced on local outlaw tracks when he wasn’t working the night shift at a gas station. 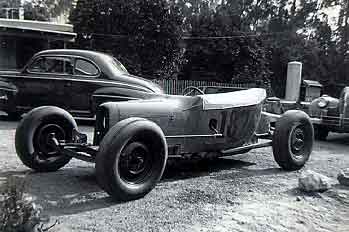 Back in the ‘50s, when hot rodding and car clubs were in high gear, Stan’s shop (a single car garage he rented for five bucks a month located in the alley behind the police station) was the meeting spot for The Street Sweepers, a car club he founded, named and sponsored.

Along with holding their meetings, the Sweepers would punch louvers, which are vents located in strategic positions on a car’s body to allow hot air to escape. Betz and his team were stamping louvers in hot rods, racecar hoods, deck lids, fenders, or anything a custom-car owner wanted punched. Guys came from miles around to get ventilated.

When not at Betz’s shop, the Sweepers would hang out at the 76 Station at the corner of Palm (Harbor) and Center (Lincoln) or at the Bean Hut, a.k.a the La Palma Drive-In. The Sweepers gave this iconic hangout the nickname “Bean Hut” and the drive-in became the favorite of car clubs throughout Orange County and beyond.

Back in the 1950s Stan drove a 1932 Sedan with a “hot flat head” that he finished in bright yellow. He also owned a ’51 Ford pick-up with Von Dutch flames, a cut down hood and “big and little” tires.

His love affair with the automobile continued throughout the decades when members of the Street Sweepers traded in their custom rides for college degrees and lives in the slow lane. Stan stayed in the trade and created automotive masterpieces.

When the louver business slowed down, Betz added paint products to his enterprise, which became Betz Speed and Color. His shop became known as the best place to find the exact color, especially for customers who wanted to match an existing stock or custom paint color.

Featured in countless magazine and newspaper articles, Betz has also been included in “Hot Rod History – Book Two: The Glory Years” by Tom Medley. Chapter Two is dedicated to Betz, “one of the best paint mixers around. Betz works in the sun and can match paint to an exactness that defies even the computers.” 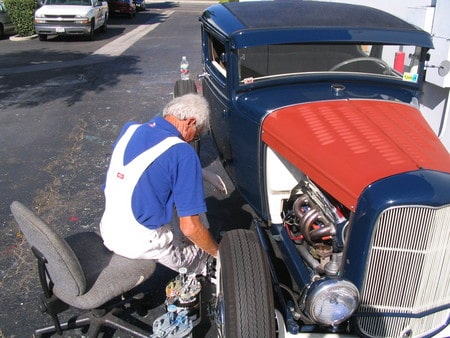 One of his award-winning vehicles was a roadster he named “2032,” a completely custom-crafted candy raspberry red highboy pickup with Lincoln Mark VIII running gear.

Along with cars, Stan had a unique collection of MGM movie miniature cars, boats, trains and other vehicles that Hollywood filmed being driven over cliffs, crushed, crashed and blown up in thousands of movies. The 100-piece collection was featured in an early episode of “Visiting with Huell Howser.”