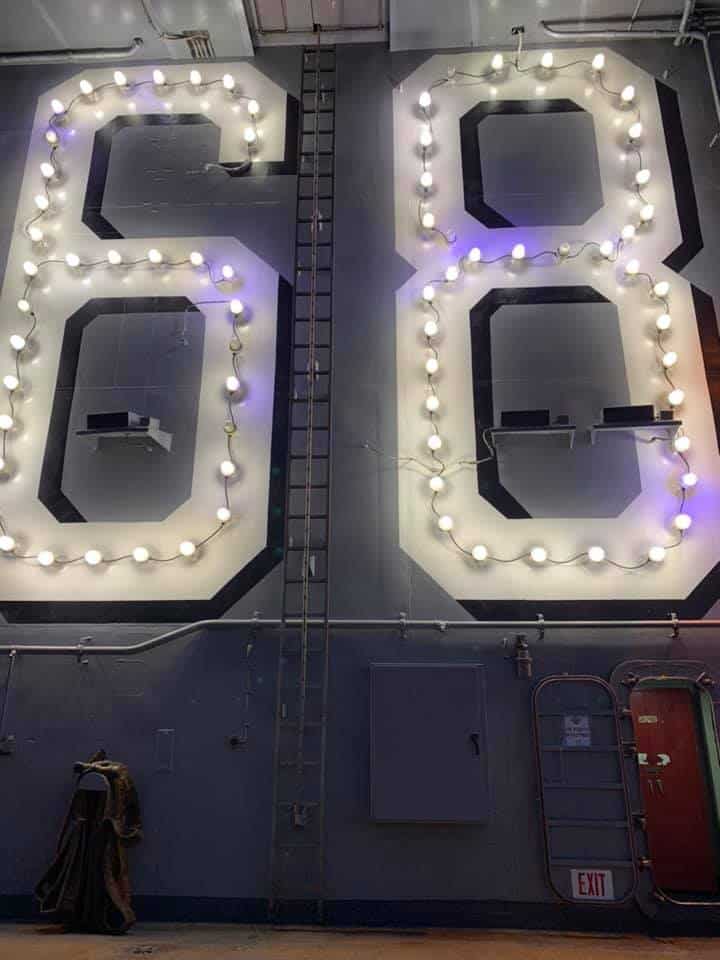 What an amazing time Jennifer and I had, aboard the USS NIMITZ Aircraft Carrier in Coronado-San Diego, to celebrate July 4th and sit on the actual flight-deck as the bombardment of pyrotechnics took their explosives high up into the ether via barges on the water that were surrounding us like Custers last stand. 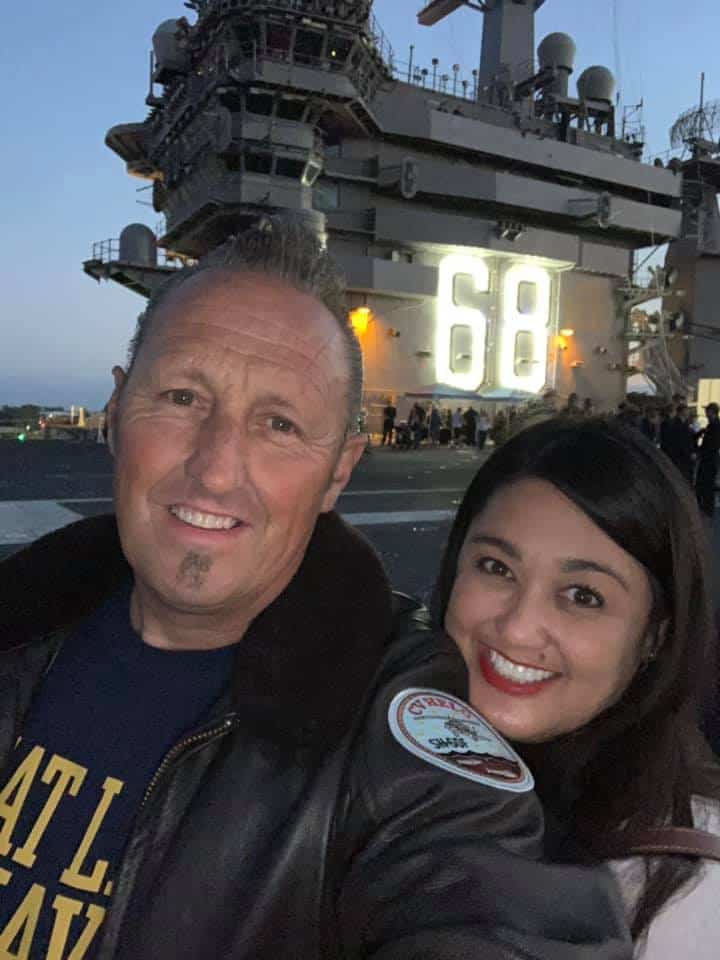 As you may know, I was commissioned by the Captain a few years ago to create a cafe Motorcycle to keep Morale high and to incorporate some of the US Navy and the Nimitz into the bike, of which I did and everybody loved it, Jack still has the motorcycle and proudly has it on display. 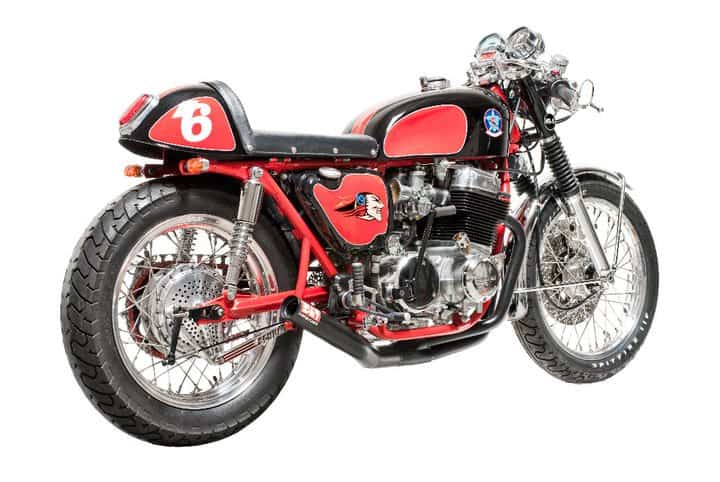 Captain Schueller Personally invited Jennifer and I to accompany him on the flight deck of the Carrier and experience a night of fireworks with some of the crew and some officers and I could not turn that opportunity down, I mean who would right?

So, we drove down the 5 freeway to Coronado and met Captain Jack and his family and then headed out to the Nimitz, of which was 5 minutes away from his Married quarters.

I have been lucky enough to have traveled out on the Nimitz not once, but Twice and went out to Sea for a few hundred miles and watched what they do to protect this great country I live in, so to be invited back for this special occasion was quite an honor and something I shall not forget ever.

Here is a little information on her if you are interested.

USS Nimitz History
After her commissioning May 3, 1975, Nimitz’ first deployment began July 7, 1976 when she departed Norfolk for the
Mediterranean. Nimitz again sailed toward the Mediterranean Sea Dec. 1, 1977. Sept. 10, 1979, she was dispatched to
the Indian Ocean as tensions heightened after Iran took 52 U.S. hostages. Four months later, Operation Evening Light
was launched from Nimitz in an attempt to rescue the hostages. The rescue was aborted in the Iranian desert when the
number of operational helicopters fell below the minimum needed to complete the rescue.
Oct. 29, 1988, Nimitz began operating in the North Arabian Sea in support of Operation Earnest Will. Nimitz then
departed Bremerton on Feb. 25, 1991 for the Arabian Gulf, relieving USS Ranger (CV 61), during Operation Desert
Storm. Nimitz again deployed Feb. 1, 1993 to the Arabian Gulf, relieving USS Kitty Hawk (CV 63) as part of Operation
Southern Watch.
Sept. 1, 1997, Nimitz set out on an around-the-world cruise. During this deployment, Nimitz was ordered into the
Arabian Gulf to support Operation Southern Watch and various United Nations initiatives.
Nimitz arrived at her new homeport in San Diego Nov. 13, 2001. In 2003, Nimitz deployed in support of Operations
Enduring Freedom and Iraqi Freedom. In May 2005, Nimitz embarked on a six-month deployment in support of
Operation Iraqi Freedom and the Global War on Terrorism. After leaving the Gulf, the strike group participated in
Malabar 2005, an exercise between the U.S. and Indian navies. In 2007 and 2008, Nimitz CSG deployed in support of
the U.S. commitment to peace and stability in the region. Nimitz departed to the Persian Gulf for a scheduled eightmonth Western Pacific deployment on July 31, 2009 in support of Operation Enduring Freedom.
Nimitz arrived at her new homeport in Everett, Washington in March 2012. March 30, 2013, Nimitz deployed in
support of Operation Enduring Freedom. Nov. 3, 2014, Nimitz took part in naval aviation history when the Navy’s fifth
generation Joint Strike Fighter, F-35 Lightning, touched down on a carrier at sea for the first time.
Nimitz arrived at her new homeport in Bremerton, Washington Jan. 13, 2015. Beginning Jan. 15, 2016, Nimitz
underwent a 20-month extended incremental availability (EPIA). Nimitz began workups Oct. 10, 2016 for a 2017
deployment completing sea trials, and Tailored Ships Training Availability and Final Evaluation Problem (TSTA-FEP).
Nimitz returned to sea Jan. 28, 2017 to undergo its first Board of Inspection and Survey (INSURV) since 2010.
In April 2017 Carrier Strike Group (CSG) 11 completed its final pre-deployment assessment, Composite Training Unit
Exercise (COMPTUEX), marking the completion of a condensed Inter-Deployment Training Cycle (IDTC). Nimitz
deployed on a regularly scheduled deployment June 1 to the U.S. 7th Fleet (C7F) and U.S. 5th Fleet (C5F) areas of
operations. Nimitz returned home from deployment on December 10, 2017. Nimitz entered dry dock six on March 1st,
2018, for a docking planned incremental availability at Puget Sound Naval Shipyard and Intermediate Maintenance Facility. 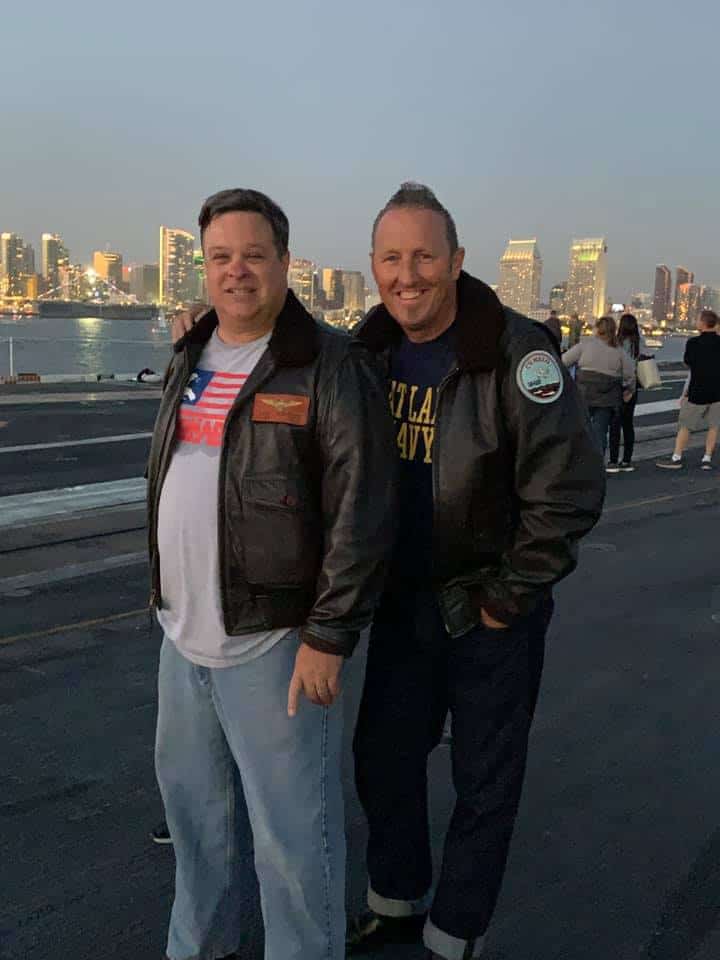 The aircraft carrier continues to be the centerpiece of the forces necessary for forward presence. Whenever there has been a crisis, the first question has been: “Where are the carriers?” Carriers suIt’s hard to explain, but the Nimitz is an immense Ship, it is basically a Floating Runway and small city on the water, and over 1000 feet long it is nothing short of stunning to stand on the deck from the stern and look towards the Bow. 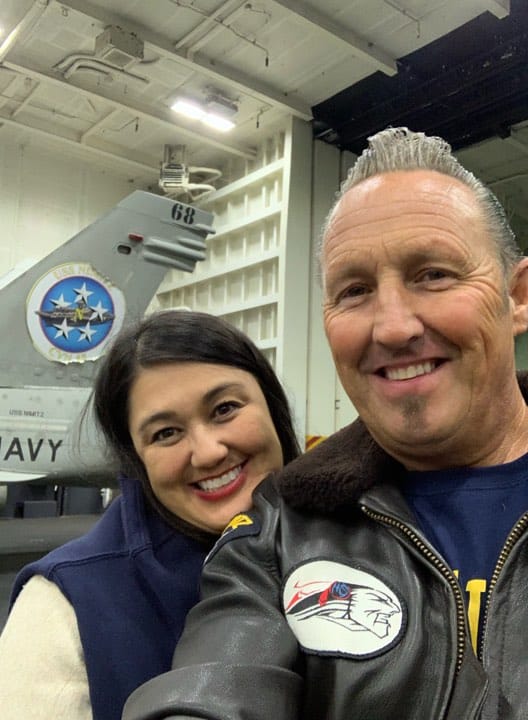 • Four distilling units enable engineers to make more than 400,000 gallons of fresh water a day for use by the
propulsion plant, catapults and crew.
• Nimitz can stock at least 70 days of refrigerated and dry goods.
• Several tons of laundry is washed every day by Nimitz’s laundry, dry cleaning and tailoring services personnel.
• Nimitz’stwo barber shops trim more than 1,500 heads per week.
• Nuclear power allows the ship to store 50 percent more ammunition and almost twice as much aviation fuel as
the largest conventional steam carrier.
• Nimitz can hold 3.5 million gallons of fuel.
• Nimitz reaches more than 23 stories high from the keel to the top of the mast.
• The hangar bay extends for most of the ship’s length. It is used for major repairs and shelters aircraft. 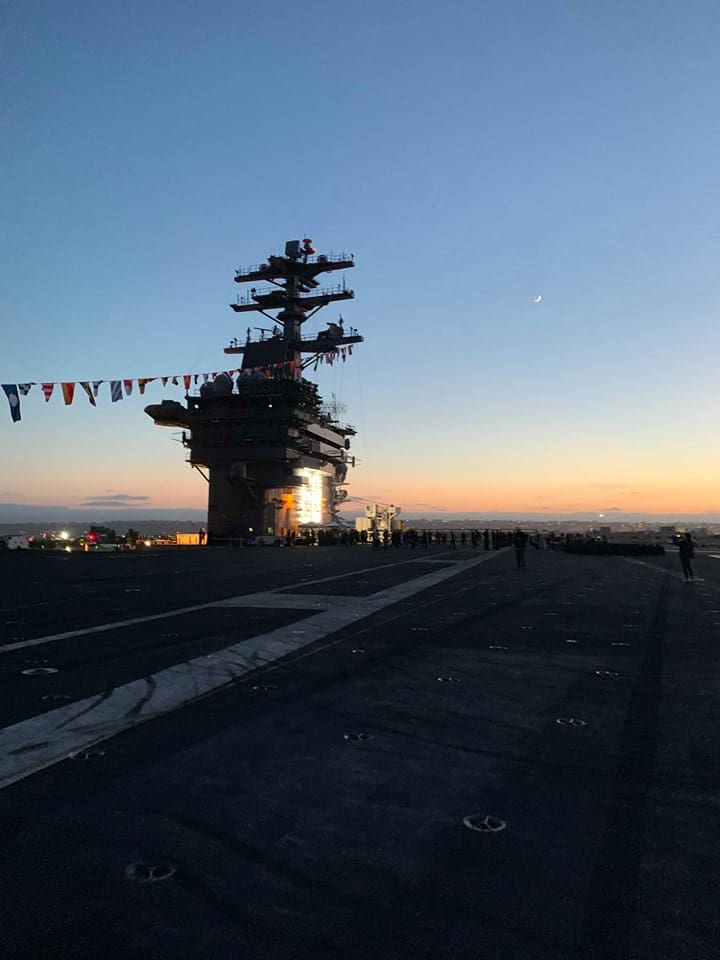 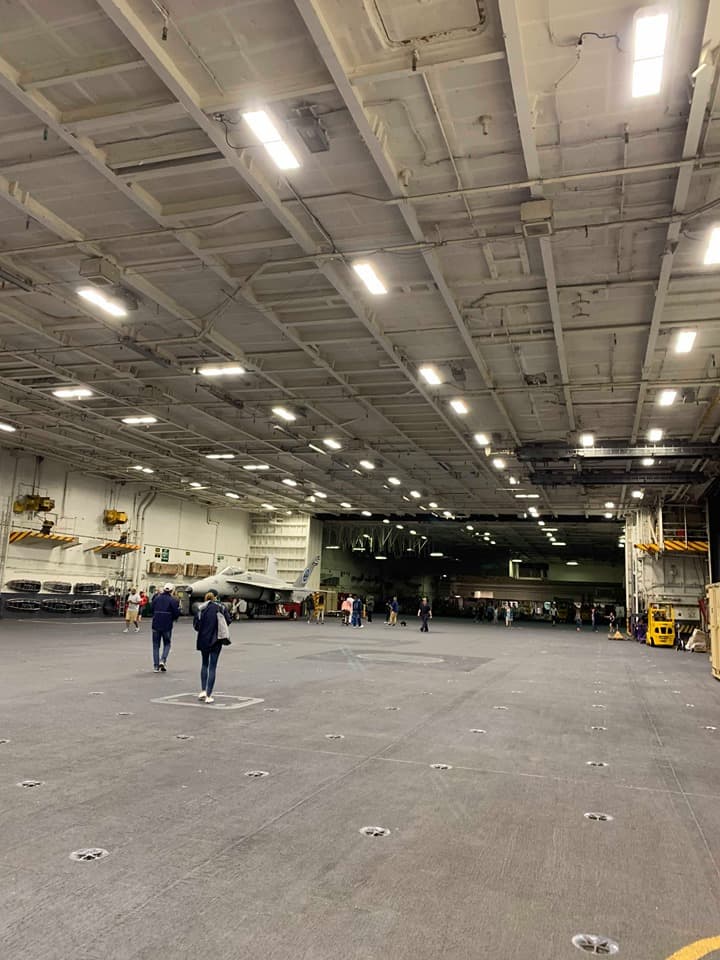 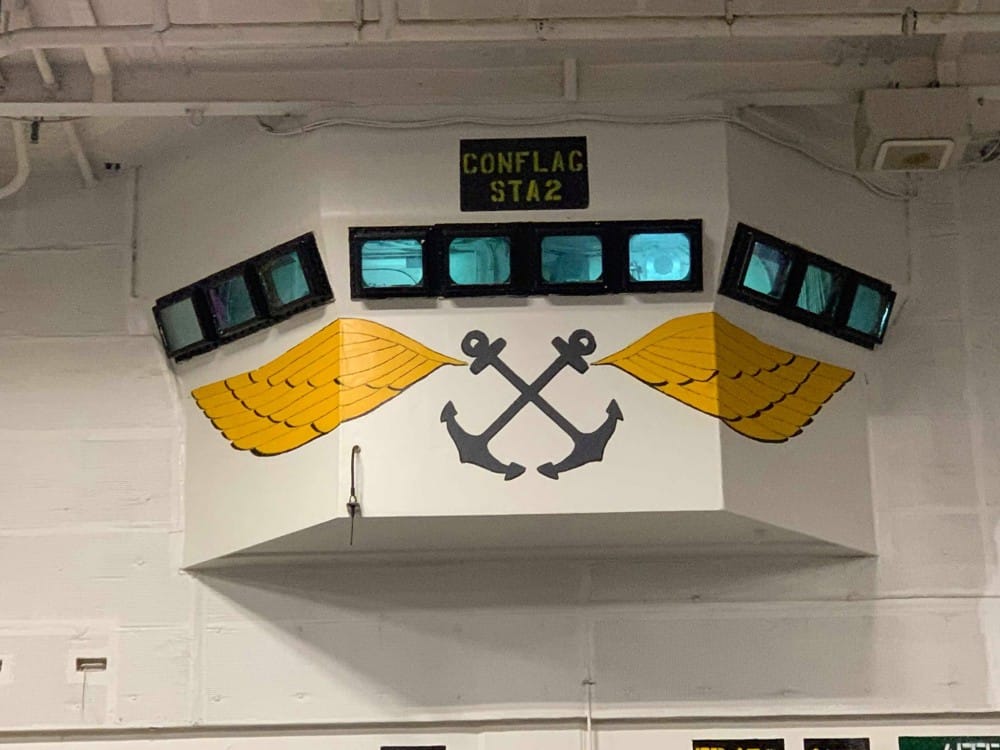 Nimitz flew missions in support of Operation Inherent Resolve from July to October, launching 1,322 sorties and
dropping 904 pieces of ordnance from the U.S. 5th Fleet area of operations. During more than three months in the
region, the ship and its crew also supported the mission by building 1,112 pieces of ordnance and performing flight deck
operations during the day and at night.
Carrier Strike Force Operations
Nimitz participated in a three-carrier strike force exercise in the Western Pacific, Nov. 11-14. While at sea, Nimitz
conducted air defense drills, sea surveillance, replenishments at sea, defensive air combat training, close-in coordinated
maneuvers, and other training. The coordinated operations in international waters demonstrated the U.S. Navy’s unique
capability to operate multiple carrier strike groups as a coordinated strike force effort. This was the first time three
carrier strike groups operated together in the Western Pacific since exercises Valiant Shield 2006 and 2007 off the coast
of Guam. The exercise focused on the ability to rapidly bring together forces from three strike groups in response to any
regional situation. 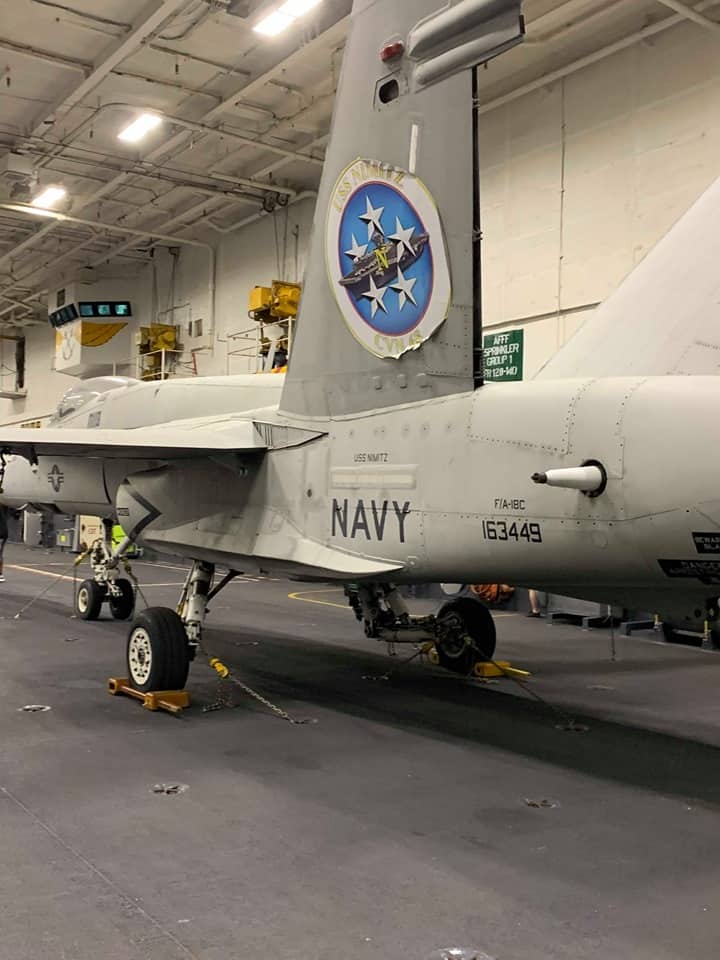