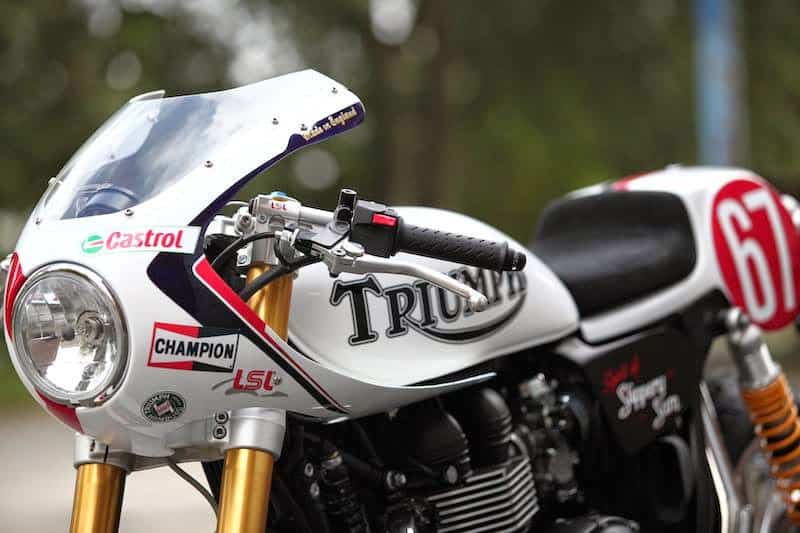 “Slippery Sam” was one of three similar motorcycles initially built by Triumph built for the 1970 Isle of Man Production TT. The bike was created by the engine’s designer, Doug Hele, who joined with frame expert Rob North to produce the successful works Formula 750 race bikes. One of these was ridden by Malcolm Uphill, won the TT at 97.71 mph (157.25 km/h). Other riders included Mick Grant; and in 1971 Percy Tait and Ray Pickrell won the Bol d’Or 24-hour endurance race on a Triumph triple.[4] The motorcycles were prepared for races by Les Williams and his team. (Williams went on to develop the Triumph Legend 964cc). Bert Hopwood urged BSA‘s managers to make a production version of the racing triple, producing 84 bhp (63 kW) at 8,250 rpm – but this suggestion was ignored, partly due to financial concerns.

Further racing development in the USA was carried out at the Duarte, California, facility under Racing Manager Dan Macias. USA BSA/Triumph dealers had access to factory race parts, but due to difficulties in obtaining race frames from the UK, Macias built his own jig and the frames were manufactured by Wenco. The main differences from the factory North frames were TIG welding instead of brazed, flat plate rear engine mounts instead of built-up formed sheet and 4130 Cro-Mo steel material. Dick Mann‘s win at the 1971 Daytona 200 was on a US specification bike.

Many have been Replicated over the years, Love this Trident below as it is just amazing.

But Below is Germanys New answer to it and boy have they done a Bang up job and would love one.

This machine is totally awesome from every angle, I would love to get my leg over this machine and throw it in the corners.

The Avon style fairing is reminiscent of my days in the late 70’s and early 80’s.

Talk about looking down the Barrels of a 12 gauge Shot Gun, these are as nice as a Original Purdy side by side.

Everything Rocks about this bike right down to the front forks and Brembo double Bacon Slicers!

Yes, it says it all right there on the Petrol tank for all to see and Bow too!

Nice styling of the race seat to cover the tail pipes and the stainless exhaust is tighter than a New Shoe!

I would love this in my shop right now!

Just pure class and lovely finishing, makes me envious but in a good way!

Would Love to hear this thing on a cold Morning!      Love the PVM Rims!

Looking forward to adding some Video of this machine so you can all see and hear this awesome Café Racer .

One of these days I hope to change mine to this set up.

That Bird is so Lucky to be able to blap that through the twisties in Germany!