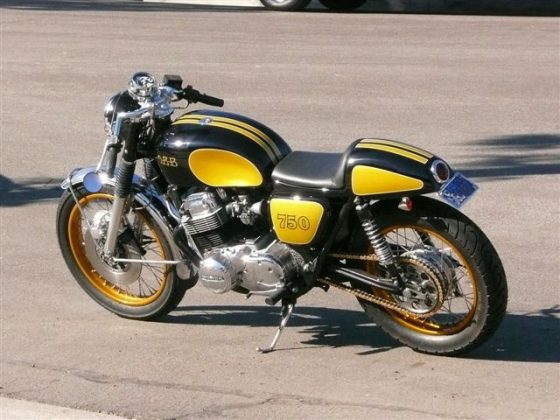 SOLD to a cool guy in CANADA.

Of course I WILL ship worldwide.

Seeing I was less than 5 miles away and in my Snot mobile, I thought why not have a goosie Gander and see what they have.

Sure enough, it was just as I expected, it was a Snotter but with a little bit of color to it.

I thought that this time, I would powder coat the rims an Aztec Gold color and match the paint on the tanks and side covers.

I also cut the neck of the old original tank and weld in an Aircraft pop up gas cap in it’s place.

The Gold and Black color scheme seems to go hand in hand, this was a lucky idea I had as I was watching a tv show on ancient Egypt and the Color came to me in a flash.

I drilled the hub and the sprocket cover out by hand and no real pattern, I just go with it and see what happens, and for me, it turned out well, this is has an original R.C. Engineering exhaust set up too.

Plenty to look at, and I even took this bike to Sturgis, where it received some great comments, of which I was so surprised, being a Metric machine there.

I really enjoyed building this machine,. 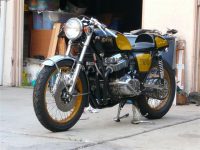