For years, California motorcyclists have enjoyed the benefits of a non-law. California is the only state in the nation that doesn’t legally prevent lane splitting, or traveling between lanes of stopped and slower-moving traffic, but there haven’t been hard and fast rules governing the practice.

A motorcyclist rides between the lanes during the afternoon commute on southbound Highway 99 in Sacramento on Tuesday. In an effort to make motorcycling safer, state officials have published guidelines in the common, but sometimes dangerous, practice of lane-splitting.
RANDALL BENTON, MCT
ADVERTISEMENT

The state agency has never taken a position on the controversial practice that motorcyclists perceive as convenient and other vehicles see as a hazard.

The new guidelines advise motorcyclists to travel no more than 10 mph faster than other traffic, to refrain from splitting lanes when traffic is flowing at 30 mph or faster, to restrict their lane splitting to the space between the first and second lanes and to consider the total environment in which they are lane splitting, including the width of traffic lanes, the size of surrounding vehicles and the conditions of the roadway, weather and lighting.

In the works for almost two years, the guidelines were developed as a result of the state’s Strategic Highway Safety Plan, for which the California Highway Patrol and Department of Motor Vehicles collaborated to improve motorcycle safety. According to the National Highway Traffic Safety Administration, motorcyclists are 39 times more likely than passenger-car occupants to die in traffic crashes per vehicle mile traveled.

Despite the new guidelines, the Motorcycle Safety Foundation, in Irvine, does not promote lane splitting. The MSF subcontracts safety training through the California Highway Patrol at 131 sites throughout the state as parts of the California Motorcyclist Safety Program.

“One of the greatest allies you have when riding a motorcycle is time and space,” said MSF vice president, Robert Gladden. “If you’re lane sharing, you’re reducing the time you have to react to obstacles in the roadway or what other drivers or riders are doing.”

Even so, 87 percent of California’s motorcycle riders say they split lanes, according to the state’s Office of Traffic Safety. 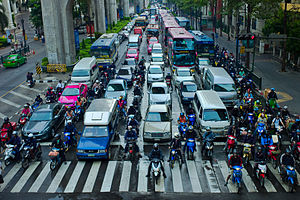