Got this via Cyril Huze posting and thought I would share too.

Exclusive. Interview Of Zach Ness About His New TV Series “Let It Ride” On National Geographic. Tonight at 9 P.M. 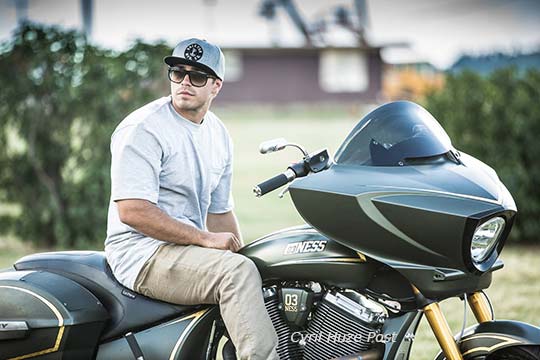 Tonight, Wednesday August 14 at 9 p.m. on National Geographic, the 1st episode featuring Zach Ness in the new TV series “Let It Ride.” In the show, wild inspiration drives Zach and his crew to build the very best custom motorcycles, whether by resurrecting dead bikes or through premium commissions from clients seeking a one-of-a-kind dream machine. Zach Ness, son of Cory Ness and grandson of customizing legend Arlen Ness, strives to set out his own path, but custom bikes never come easy…

This evening episode. When a stunt rider from the YouTube sensation ”Harley Wheelies” group commissions Zach to build a bike, the challenging, big-ticket job comes down to the wire,  pushing Zach and his crew to their limits. This monster of a motorcycle needs to be finished in two weeks for the next “Harley Wheelies” video shoot. The problem? The bike Zach buys is just a pile of old parts. Tensions rise as the deadline looms and the “Franken-bike” refuses to come together…

Before you watch this first episode, I asked Zach Ness to answer a few questions. 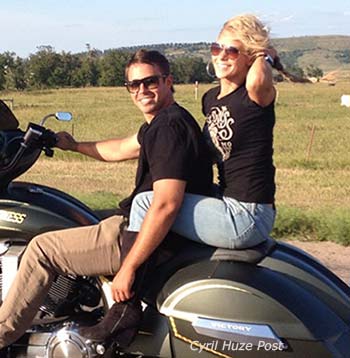 Cyril. You wear a famous name in the custom motorcycle industry. But people know very little about you. Let’s begin by the beginning. Age? Matrimonial status? Education?

Zach. 25 years old, Not Married but have a girlfriend, Bachelors Degree in Business Administration from San Diego State University

Cyril. Tell me about the oldest memory you have associated with motorcycles.

Zach. The oldest memory I can think of is being in my Grandpa’s garage when he was working on one of his Tail Dragger style customs. My parents were gone, so I was at Grandpa’s for the weekend, I remember just sitting down on the garage steps in front of the door leading to the house and just watching and analyzing each process of the build. After several hours I remember asking him countless questions, I think after the 50th question he told me that I talked too much. He told me to watch, learn, and then do. Ever since, I like to keep the talking to a minimum and focus on learning my craft and getting the work done

Cyril. When you were a kid, you wanted to become a?

Zach. I never was set on being anything specific when I was a kid. I was always just interested in learning and experiencing new things/subjects.

Cyril. Do you remember your first accompanied trip with your parents or grandparents to a major rally event? Which one? What was your first impression?

Zach. The first rally I ever went to was Laconia with my dad Cory. I was 15 years old. It was right after I finished building my first motorcycle. My dad was on the Hard Rock Roadhouse tour, which was held in one of the largest bars at the rally. I was allowed into the bar so I thought it was the most insane thing I’ve ever seen. At the time I was new to riding and had my motorcycle driving license, so I loved riding around the event and seeing so many custom bikes in one place. The highlight had to be judging the Hawaiian Tropic Bikini contest. A few months later we had a family party for my birthday and the TV happened to be on the Entertainment channel (E). I popped up on the screen judging the contest with the girls persuading me to give me their vote… I had a big smile on my face and felt pretty cool…. Grandma and Mom didn’t think I was so cool.

Cyril. Many children don’t want to embrace the same career as their parents. Was it the case, at least at a certain period of your life?

Zach. My grandpa and dad have always been my heroes, and fortunately we have always gotten along very well. So I can’t say I’ve ever not wanted to embrace my current path. But at the same time I didn’t want to only follow but to make my own path by diving into all types of motorcycles, design, and possibly other subjects. My core will always be motorcycle, but I also don’t want to limit myself 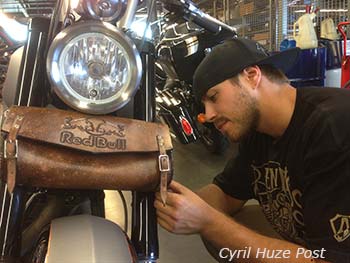 Cyril. When did you know for sure that you wanted to join the Ness enterprise. How old were you?

Zach. After finishing building my first bike at 15 was when I really knew for sure I wanted to join the Ness enterprise. I was always very interested in bikes and in our business. But it wasn’t until I finished turning that last bolt, fired the engine for the first time, and actually rode my machine down the road that I was positive in my direction. It was a feeling of personal satisfaction that I hadn’t received anywhere else yet and it was the first time I was allowed to ride on the actual street. It was over after that

Cyril. Growing up, was there a special motorcycle, a certain custom builder you admired?

Zach. The builder was Grandpa and the motorcycle was his “SmoothNess.” Till this day I think it the most beautiful motorcycle ever built

Cyril. Your first own motorcycle was?

Zach. The first motorcycle was the full custom I built when I was 15. It was a chopper with a Ness Y2K frame, custom tanks and fenders, and all polished & chrome accessories. The paint was a black base with American flag flames. Someday I would love to get it back. I sold it to purchase my first truck

Cyril. Which year did you officially join the Ness business appearing on the payroll? What is your current official title and responsibilities?

Zach. I started working at the shop at 13 sanding frames, sweeping the floors, and working in packaging putting together bolt kits for products. I worked every summer until 15 when I was officially and legally allowed to be on payroll. Since I was 15 I worked every weekend and every summer until I went off to college. Through college I worked each summer and during my winter & spring breaks. I flew home to work as well. My last two years of college I started getting very involved with our core business and with Victory. I graduated in 2010 and started working full time the day after I moved back. My current responsibilities in our business include: – Design: My dad and I share the responsibility of designing all our products including parts and apparel. As well as our company and personal motorcycle builds. – Catalog and marketing: which include our parts catalog, ads, and our product wirte-ups and information regarding products. Continue reading ‘Exclusive. Interview Of Zach Ness About His New TV Series “Let It Ride” On National Geographic. Tonight at 9 P.M.’