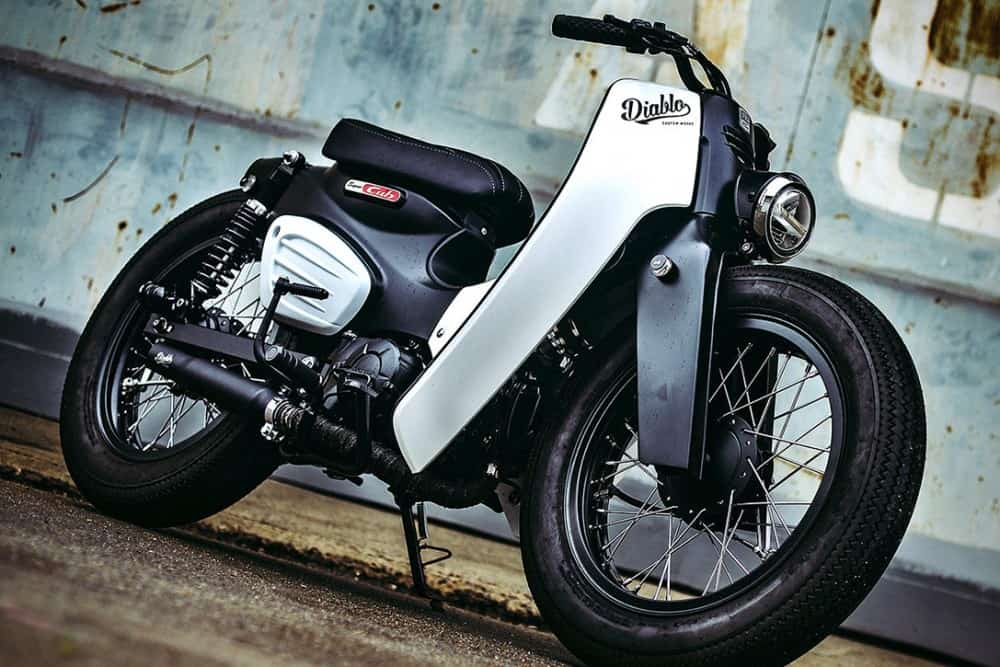 in 2018 Thailand is launched one of the most sold automobile in the world, the Super Cub. They will be made in a brand-new factory in Thailand apart from the already existing 16 plants spread across 15 countries that serve customers in more than 160 countries.

To celebrate this feat, Honda Thailand had donated a bike from the first production batch to the K-Speed custom crew to work their magic on history’s most iconic moped. After 30 days of toiling, the magic shows on the “Diablo.” 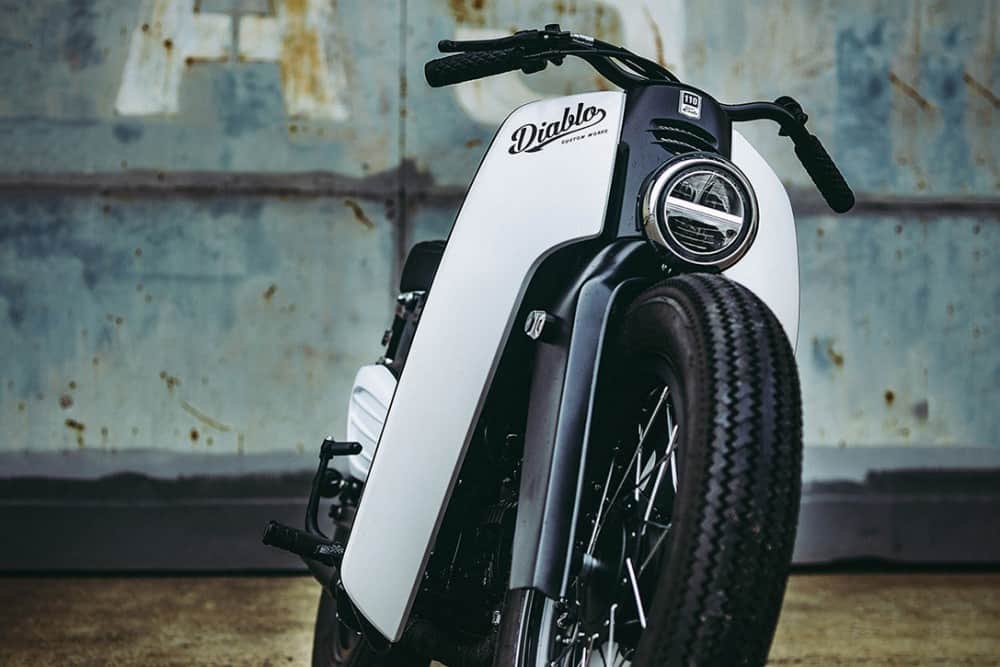 Over the year, the Japanese fine-tuned the Super Cub to evolve with the generations, and yet the underlying concept remained unchanged since the introduction of the first Super Cub in 1958. This iconic design even managed to become the first one ever to obtain a three-dimensional trademark registration in Japan.

Now for 2018, Honda has given the Super Cub its brand new update and brings back the round curvy design, featuring LED lights for the first time in the Super Cub series. Mashing advanced technologies with traditional Super Cub styling, Honda has not forgotten to look back at their past to go forward. 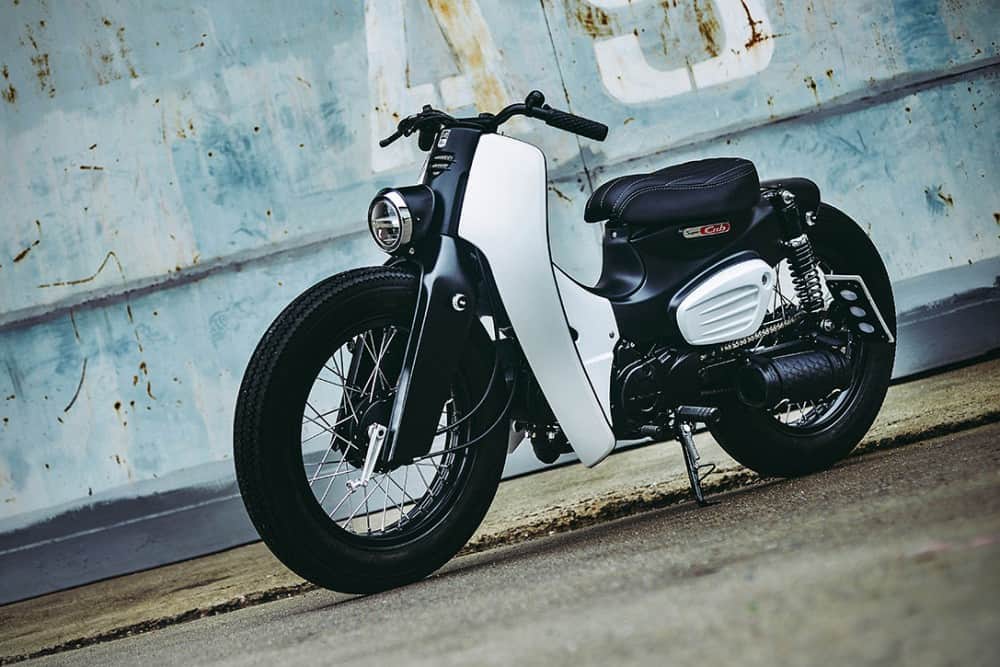 To take the level up a notch, Honda thought, ‘Why not we also showcase how the Super Cub will idealize with the growing custom space?’ Enter K-Speed customs.

Piloted by a simple man who goes by the name ‘Eak,’ the Bangkok based workshop has craftsmen who can turn out bikes ranging from the classy and practical to the downright whacky. All their builds come as clean as one can get and radiate an air of sophistication. They just love swinging it like that. 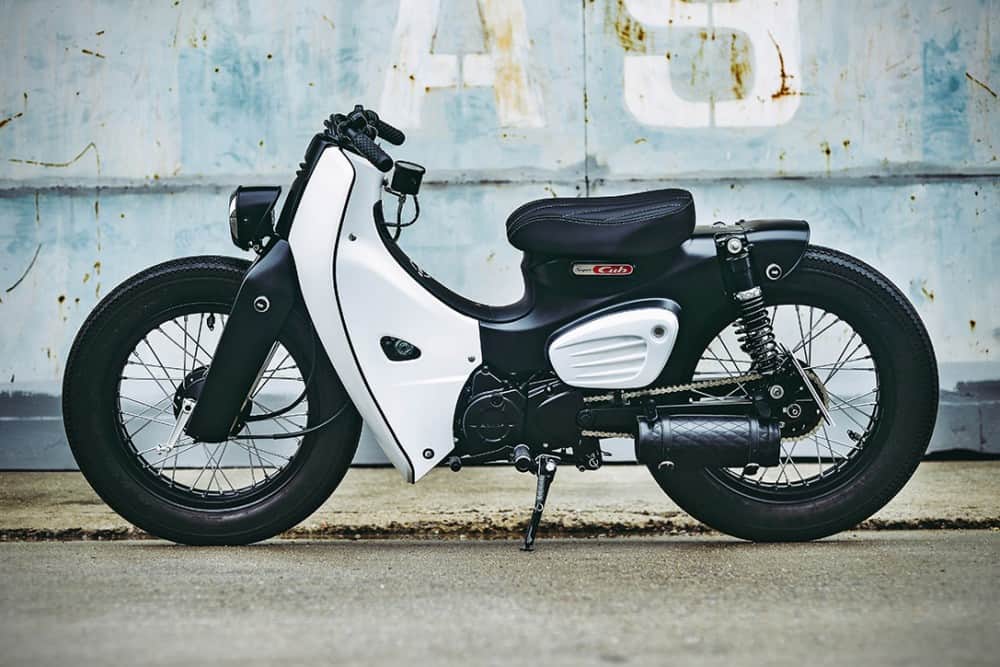 The ‘sawtooth’ tires give the Super Cub that suave right off the bat. To keep things fresh, yet retain the reminisce of the heritage, the guys left the lower fairing as it is and chops off the head to replace the stock steering cluster. The new custom wing-shaped handlebars adorn Biltwell Inc. grips and a bicycle bell. Neat.

The headlight finds its space just above the front tire nestled in a custom-made nacelle. The dash includes custom switches and toggles below the steering stem that takes care of the ignition and turn signals. The analog meter helps keep things retro. 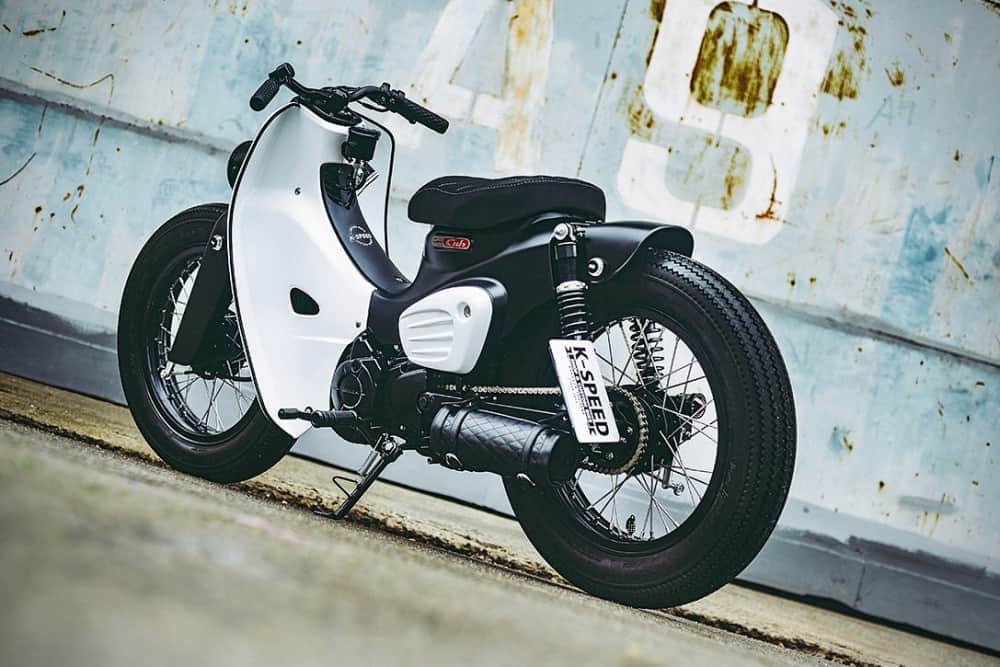 Speaking of which, the Vee Rubber sawtooth tires are wrapped around a pair of 17×2.50 spoked wheels, and the fork covers gets a rework to showcase a beefier front appearance, and they come with LED turn indicators on the sides. The wheels get a stealthy ‘hand grenade’ valve caps. How’s that for nifty detailings? 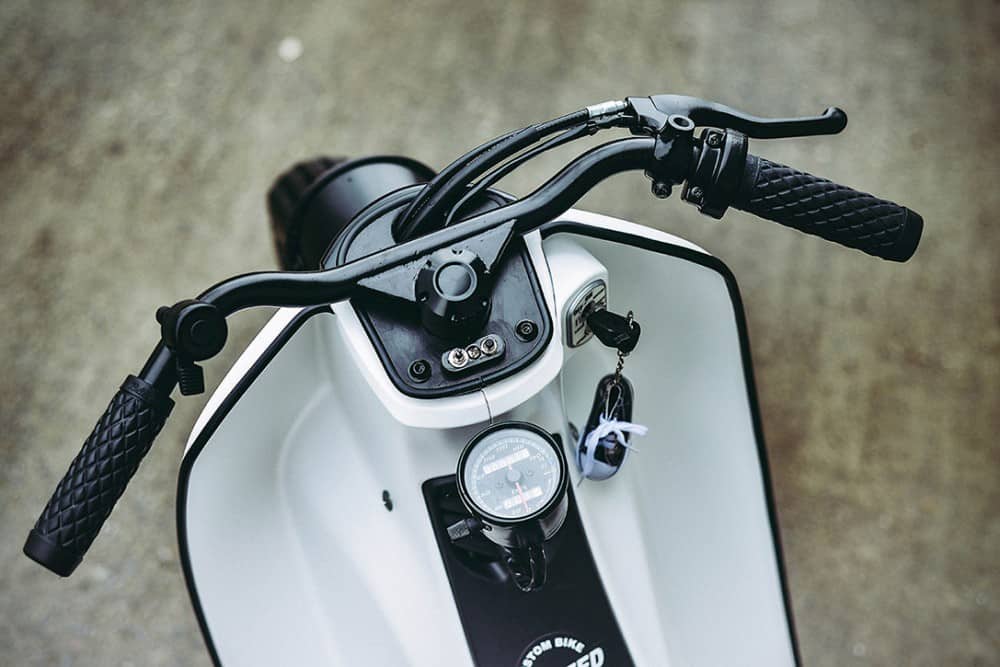 At the rear, the fended gets tossed out, and a new custom cap fender keeps things tidy. They’ve snuggled a new bolt-on aluminum swingarm and tethered adjustable rear shocks to keep things smooth on the ride. The Diablo also features a new LED taillight setup right below one of the rear shocks while the license plate bracket comes on the opposite side. 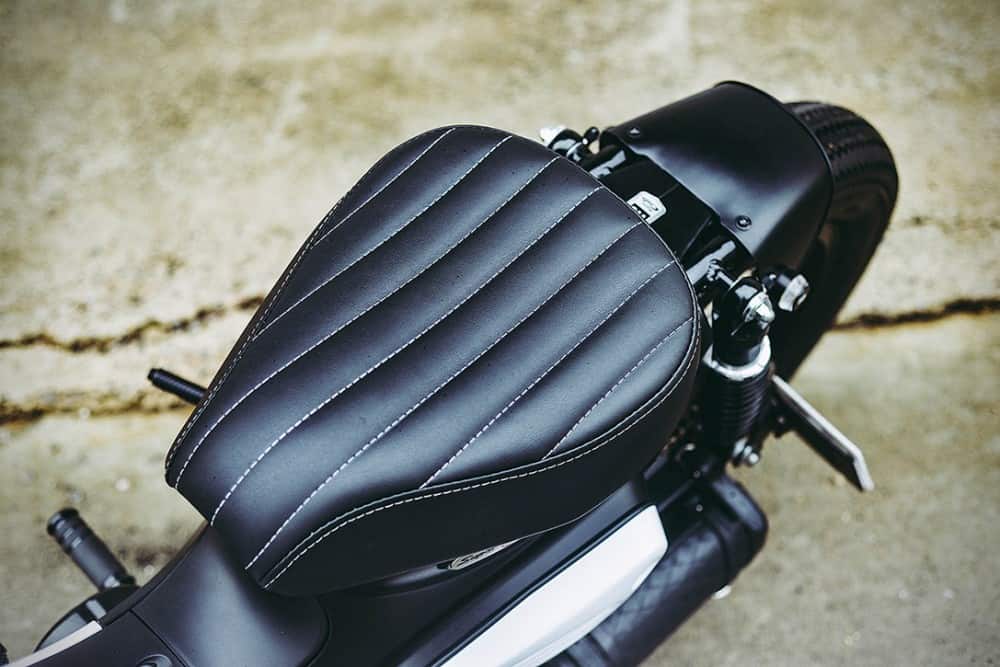 My favorite, however, is the leather tool roll attached to the swing arm. How classy is that? Custom made seat gets new upholstery and contrast stitching in a vertical tuck-and-roll pattern that synergizes with the handlebar grips. CNC-machined foot pegs, ribbed side panels and the blacked out engine bay gives a beautiful contrast to the matte black and white paintjob that oozes with charm.

To finish things subtly, K-Speed guys did away with the small grill upfront along with the Honda logo and threw in new decals to the Super Cub. 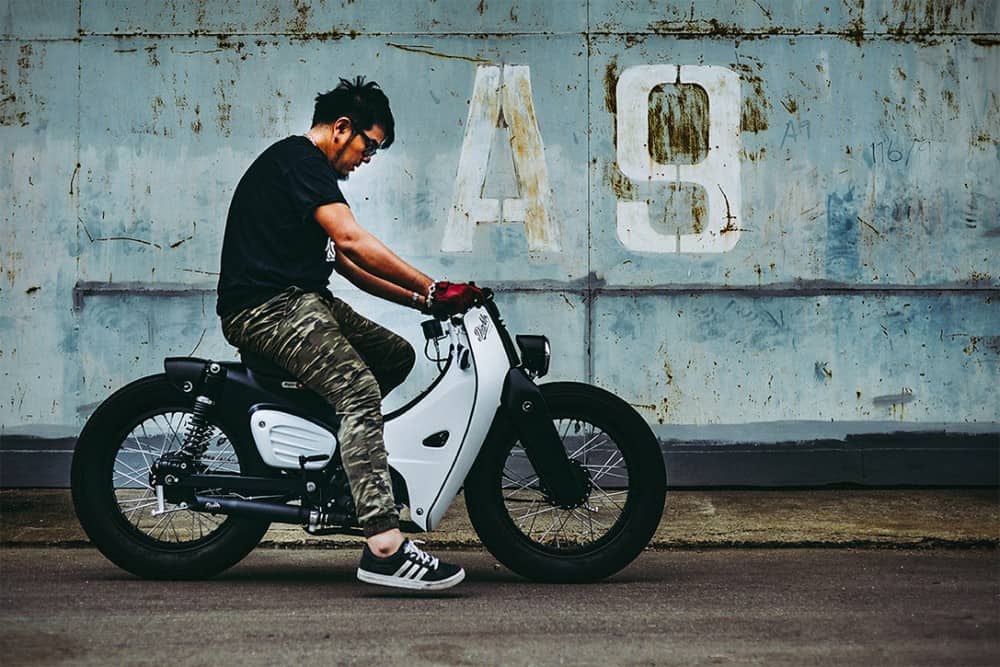 We don’t know if we can buy one or is this Diablo a one-off custom work commissioned by Honda. Whatever it is, is a job well done. 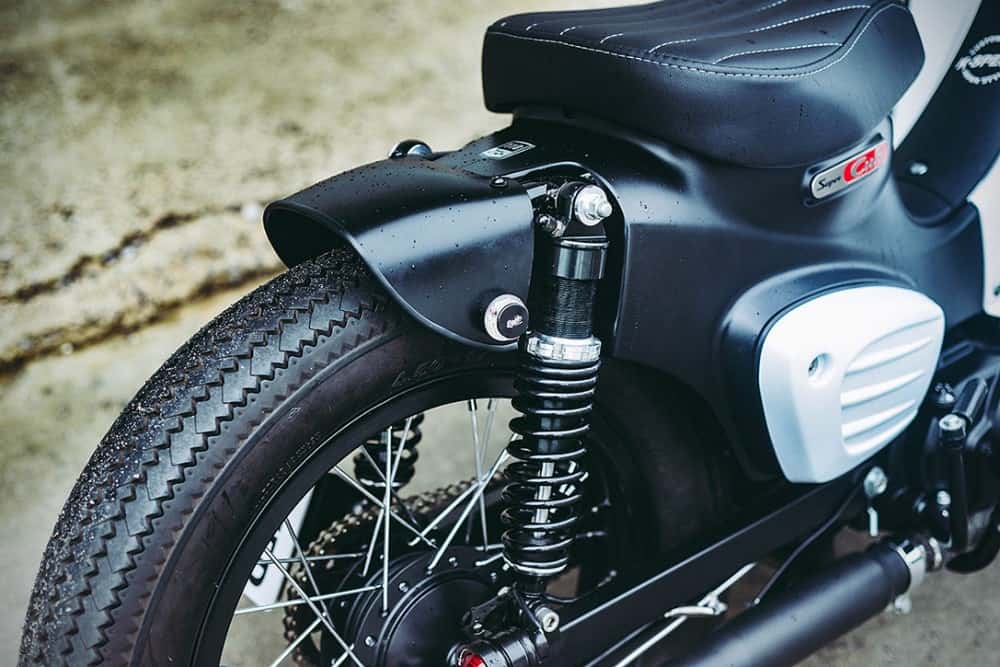 Serving 100 million happy customers is a well-achieved milestone for any business, and no other manufacturer but Honda could have made it seem this easy. Being the first two-wheeler to cross such a mark is the Japanese Red Wing’s Super Cub that began its life way back in 1958. 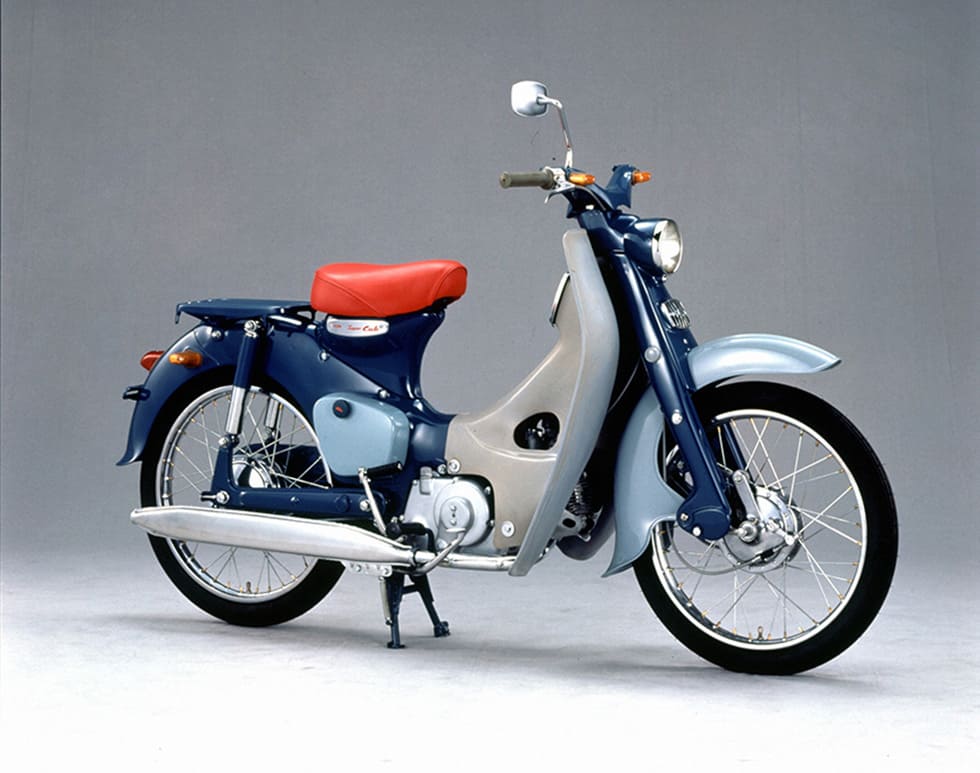