Some of you that may be old enough to remember the Legendary Builder and Racer ” Russ Collins” May well indeed remember the triple engin monster of a machine called  “Atchison, Topeka & Santa Fe”, This was named after the famous Rail line and Russ Debuted the bike back in 1973, when I was a mere 11 years old, little did I know I would watch this motorcycle in person and what a great feat of engineering for its time.   Featuring three nitro-burning CB750 engines mounted in tandem, the AT&SF was the first motorcycle to make a seven-second quarter-mile pass (7.80 seconds at 179 mph) at Ontario Motor Speedway in 1973. 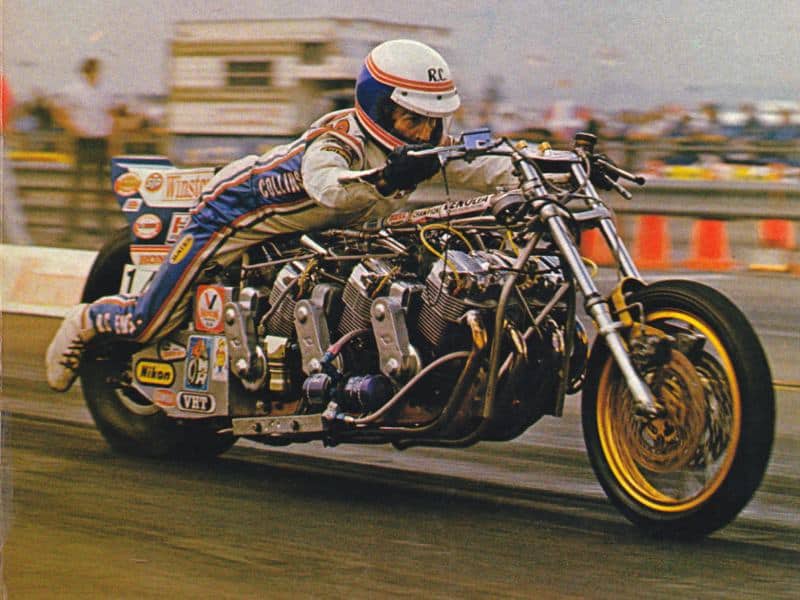 The bike not surprisingly, the AT&SF was extraordinarily difficult to ride. A horrendous crash in Akron, Ohio, in 1976 destroyed the motorcycle and left Collins in a wheelchair for months, giving him plenty of free time to contemplate its replacement. It was during this long recuperation he dreamed up “The Sorcerer,” powered by a pair of 1,000cc Honda Fours tied together and tuned to fire like a V-8 then topped with a GMC 3-71 supercharger. The NHRA Top Fuel record that Collins set on the Sorcerer in 1977—7.30 seconds at 199.55 mph—stood unchallenged for more than 11 years. Collins was more than a decade ahead of his time.  But, the machine is now being completely rebuilt and the motors are almost ready once more. 49 Years after that, one of the coolest engineer/Builders has built his own Triple Engined SOHC machine and dreams of hitting the Salt for a record of his very own, Originally from the coastal city of Kumamoto on the Japanese island of Kyushu, Kiyonaga-san opened the Kiyo’s Garage workshop in Gardena, Los Angeles County, back in 2013. Back then Kiyo created a CB750 Custom Machine named “Cherry Blossom” Hand made stretched frame and a ATP Turbo with ARD Magneto. Ran really well at El Mirage dry lake. 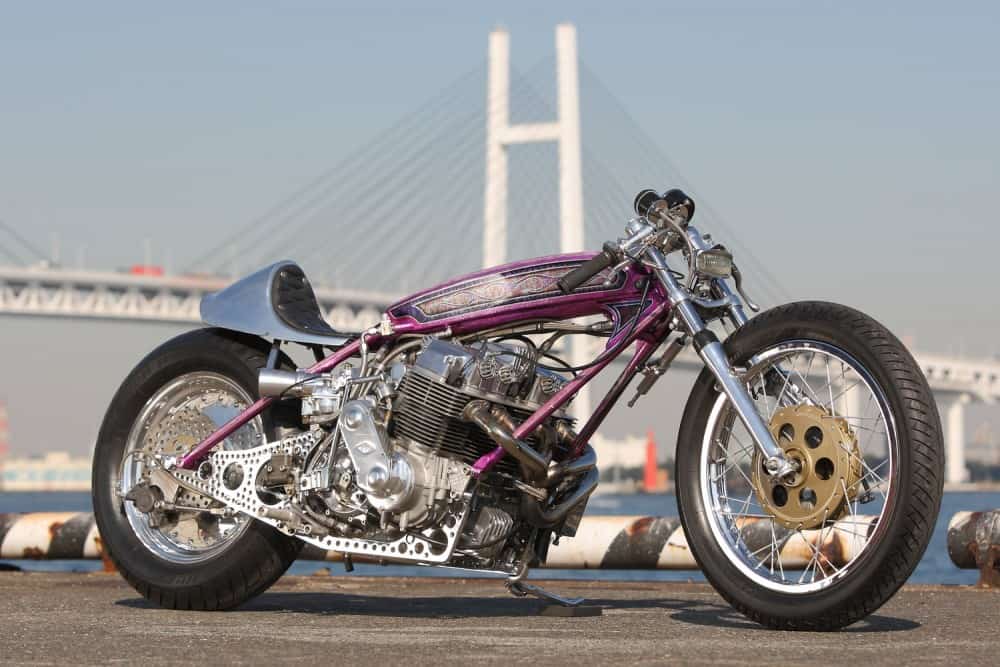 Kiyos worked at the garage company for over a decade and was Yoshi’s top Mechanic/builder, he learned a lot from Yoshi and decided that it was time for him to get his own workshop in Gardena, so he set up shop in 2013 and has become a prolific quality Builder/Fabricator of Motorcycles.  His second machine was another CB750 Based Creation called ” Gekko ” (it means “moonlight” in Japanese).

Except this time, he linked together two CB750 motors, boring them out for a total capacity of 1,620 cc.Of which he ran at El Mirage and Bonneville on SCTA events. So to complete the trifecta of Motorcycle and of course Engines, Kiyo decided to go with a trilogy machine that evokes his Japanese heritage with Motorcycles and Manufacturers, as well as his Engineering skills and Custom creativity, thus the “Galaxy” was Born. 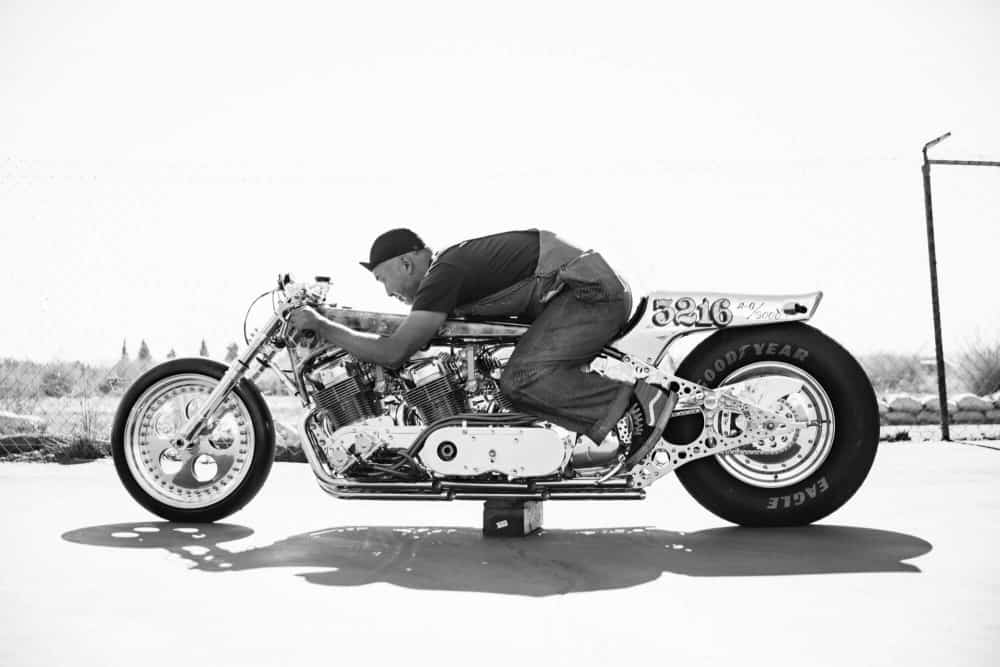 The idea of actually building The Galaxy started to materialize when Kiyo and his wife, Kat, visited the Haas Moto Museum in Dallas, Texas, in May, 2019. They were there to discuss the museum’s acquisition of Cherry Blossom and Gekko — but Kiyo also presented the museum’s owner, Bobby Haas, and director, Stacey Mayfield, with sketches of his three-engined concept. 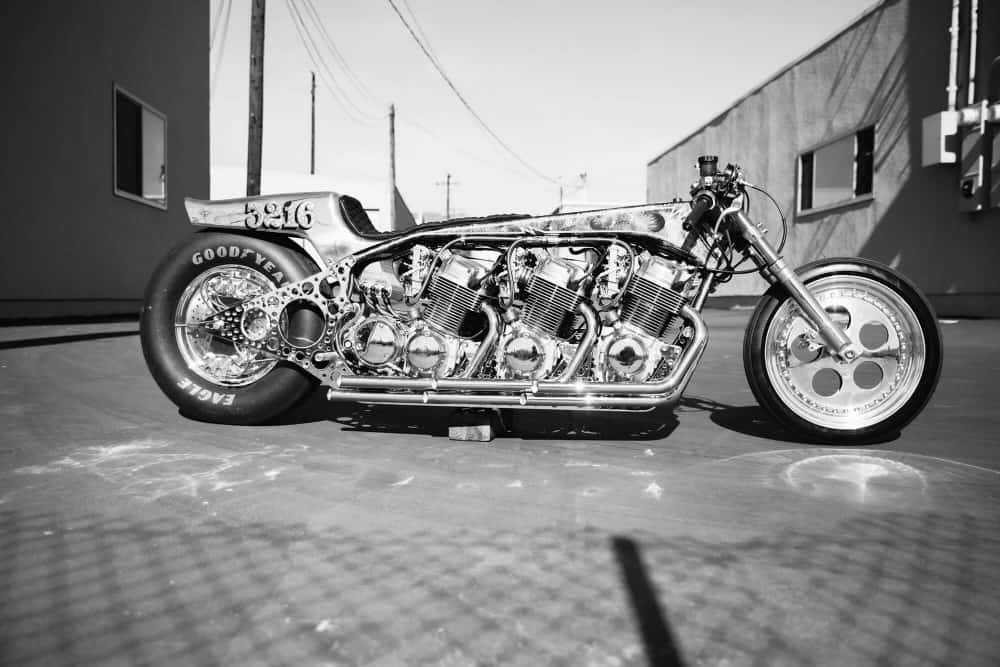 All three of The Galaxy’s four-cylinder power plants are 1978 Honda CB750 units with F2 large port heads. Each motor has been bored out to 836cc, and fully rebuilt with lightened and balanced crankshafts, heavy-duty connecting rods, performance cams and oversized stainless steel valves. Extra care was taken to make sure each motor’s internals conformed to the exact same spec. Each motor is fed by four Keihin FCR 35mm carbs, with significant work to the intake manifolds to help them run optimally. All three carb sets are linked via a rod and heim joint setup to make it easier to synchronize the throttle slider. But re-jetting is still a chore, given that there are 12 carbs to fettle. The entire setup breathes out through twelve custom-made exhausts. This behemoth is powered by three bored-out CB750 motors which essentially makes it a 12-cylinder 2,508cc glory, a mean feat that really hasnt been replicated since the days of Russ Collins in the 70’s. So much hand crafted work you dont even see, his attention to detail is unsurpassed and I can relate to the hard work that has gone into to create such a work of art. Just to dial all three of these in with 4 Keihin FCR 35mm carbs to each cylinder, must of been a mechanical nightmare to say the least, so Kudos to you Kiyo for patience alone. A very skilled and self motivated man that I have huge respect for and at some point try and make the trip down to his workshop to tell Kiyo in person about the way I enjoy his builds, I have known Kiyo for many many years and have always held him in high esteem. Well done my friend and hope to see some great times placed on the dry lake.