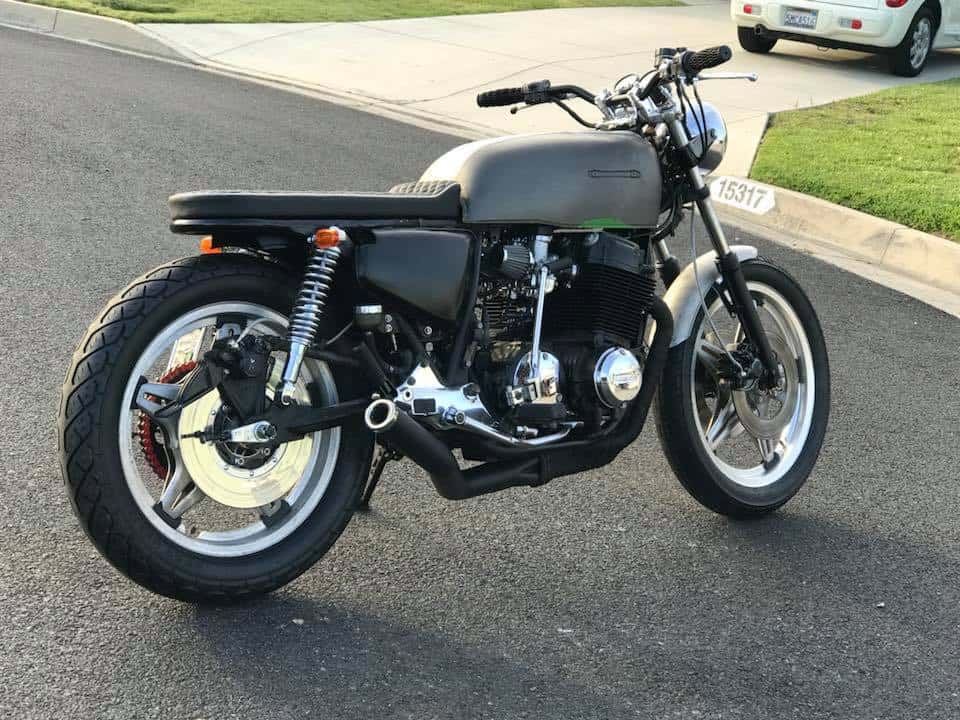 People ask me about my exhausts all the time, I have had many repeat customers over the 22 years here and just happened to come across this 750F that a Customer bought to me on a trailer and has sat for 8 years, it was a mess and other people could not get it to run , so as the exhaust and motor were in much needed attention, I gave it a shot and she cleaned up pretty good, thought I would share it.

It wasn’t a show bike, just a run around machine that was in bad shape, I spent a weekend and got the motor looking nice, used one of my Yoshimura style 4 into 1 Performance exhaust systems and wrapped the headers with DEI Black 2″ wrap and boy was this a fun ride now, she was a little cold from the get go, not surprised as it hadn’t run in 8 years but, with rebuilt carbs, new gas, chain, exhaust , speedo and even brake lines, this old inline four breathed new life and to be honest, I wouldn’t of minded keeping this as a parts getter, as it was a blast to ride. 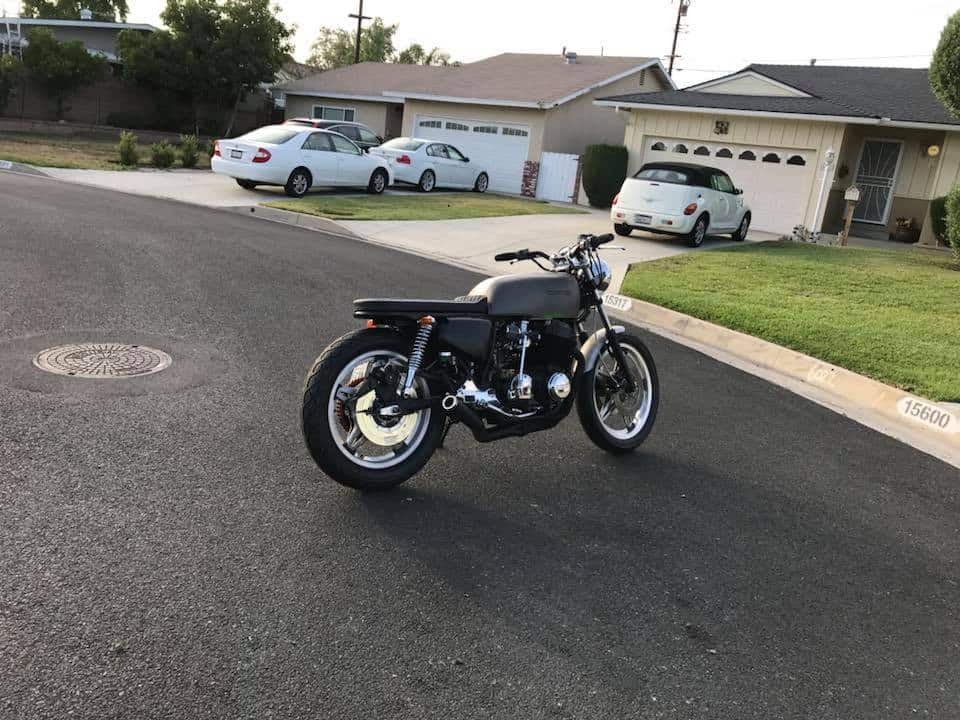 I also added a hoop for the Customer, his Original seat was rotted beyond recognition, so made him a seat assembly and upholstered with Diamond Stitching, I used memory foam and it was really comfortable. 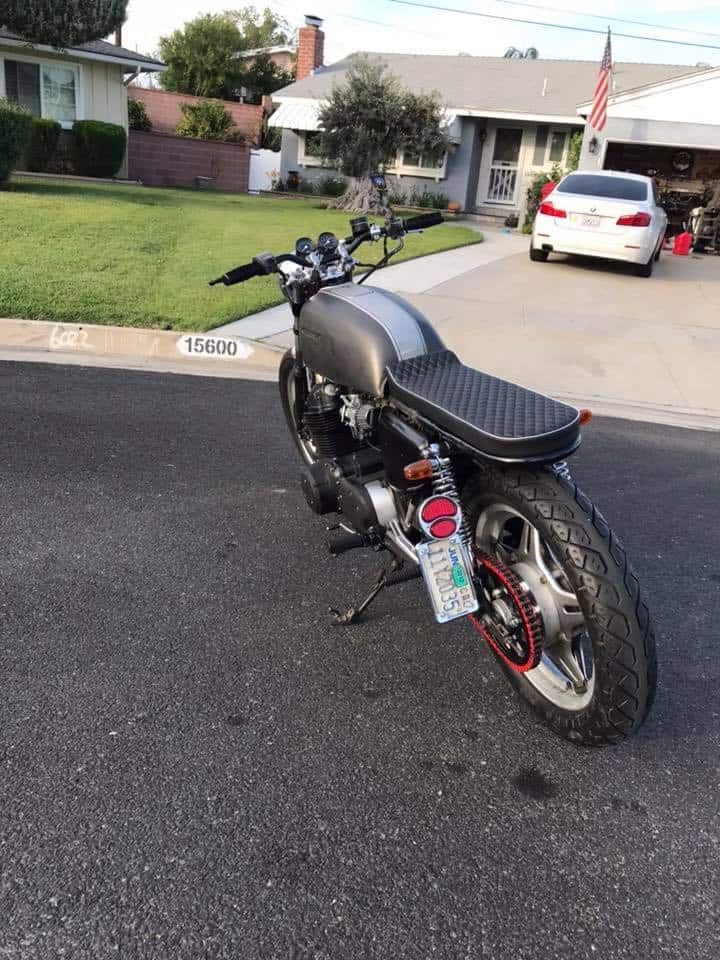 I used my rear Custom License plate Holder that has a Model A Ford tail light attached and was an LED version, so nice and bright to get you noticed when you are applying the brakes. 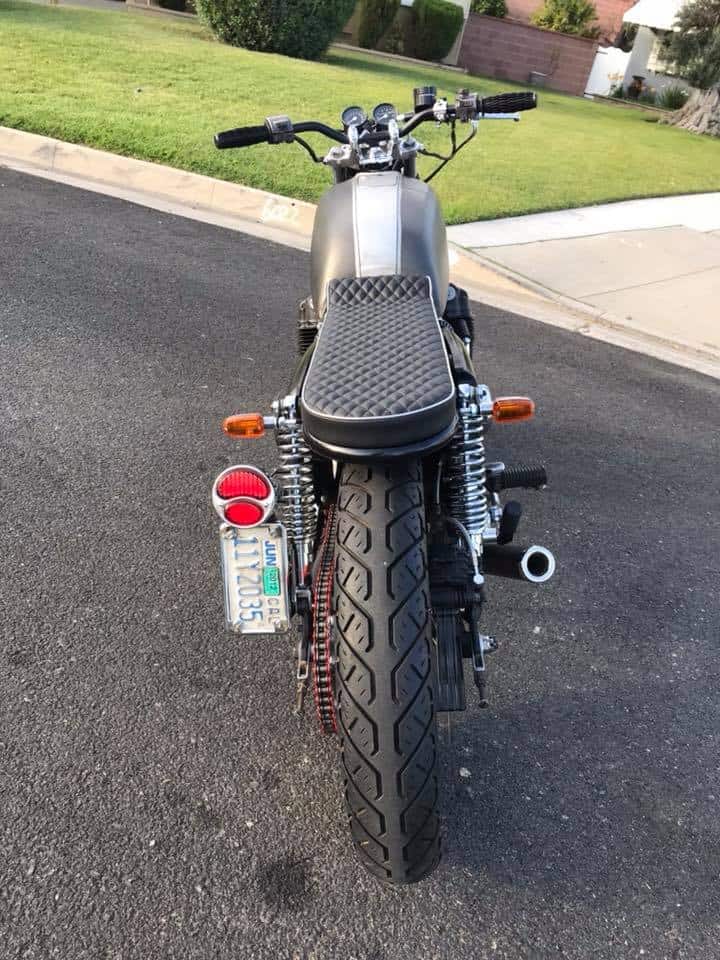 This old Supersport has no turn signals, they were lost many moons ago and ugly as hell anyway, I sell a lot of these Brushed Aluminum 12v Signals and these were just the ticket for this build, you will also notice I made a new Braided  Stainless Steel rear brake line as the original one had rotted out and the Caliper had seized up. The tires were totally rotted out, so fitted my Favorite Bridgestone brand, these look great and handle so well, sits the bike up nicely too. 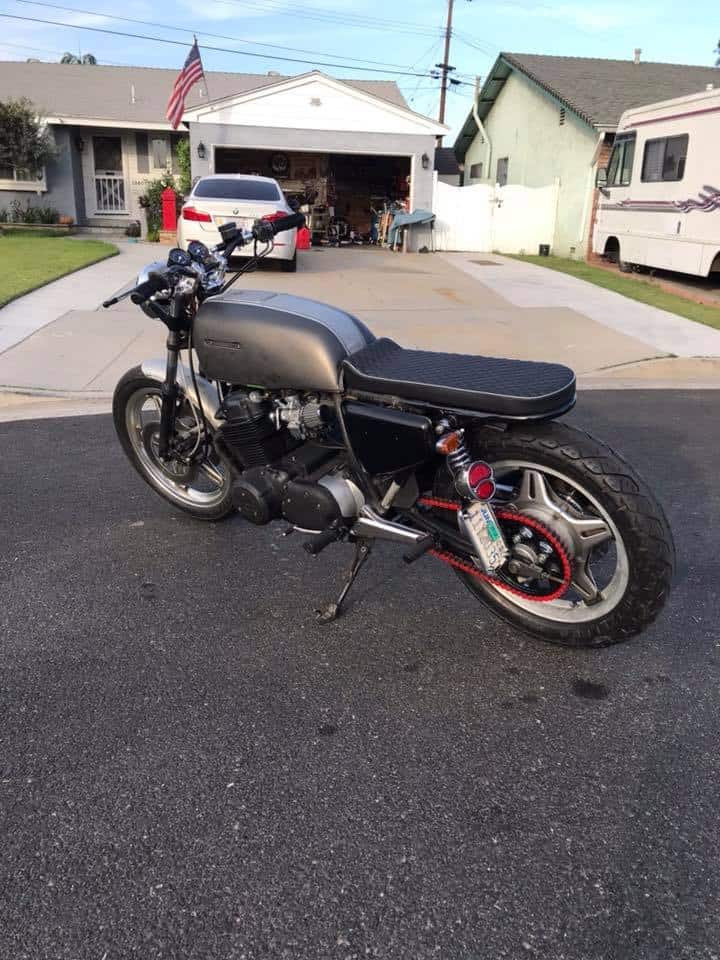 I also Added a New RED 530 DID chain, this was a good Combination, have always liked Black and red and with New sprockets and the old ugly 630 chain and sprockets removed, this was a smooth ride, no binding noise you get from old chains etc.

The Original headlight was broken beyond repair, so used my own Custom Chrome 7 inch set up that has LED turn signals inside the lens, cleaning the front end up as you may remember, 1977-1978 F models had huge Turn signals that jutted out like elephant ears, you may also notice that I fitted New Aluminum Levers on handlebars, New grips and new cables. 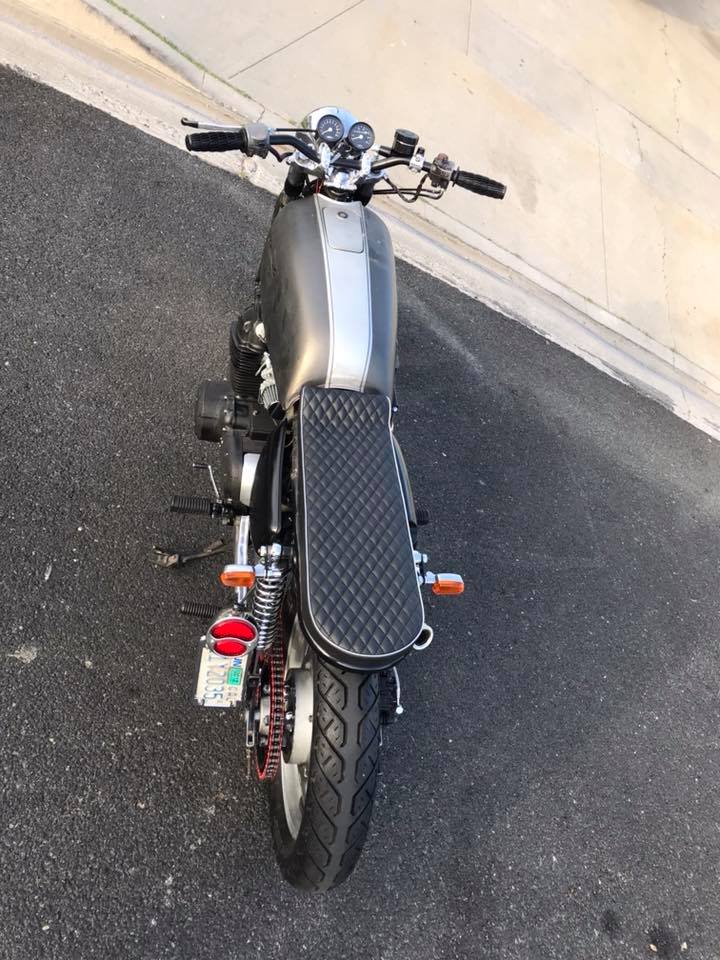 I added a set of 2.5 Mini Gauges, these are calibrated for the 750 and clean the whole top end of the triple tree up, his Originals were missing, so these were a great choice and I think suite the bike well, not cluttered like many you see on the road. 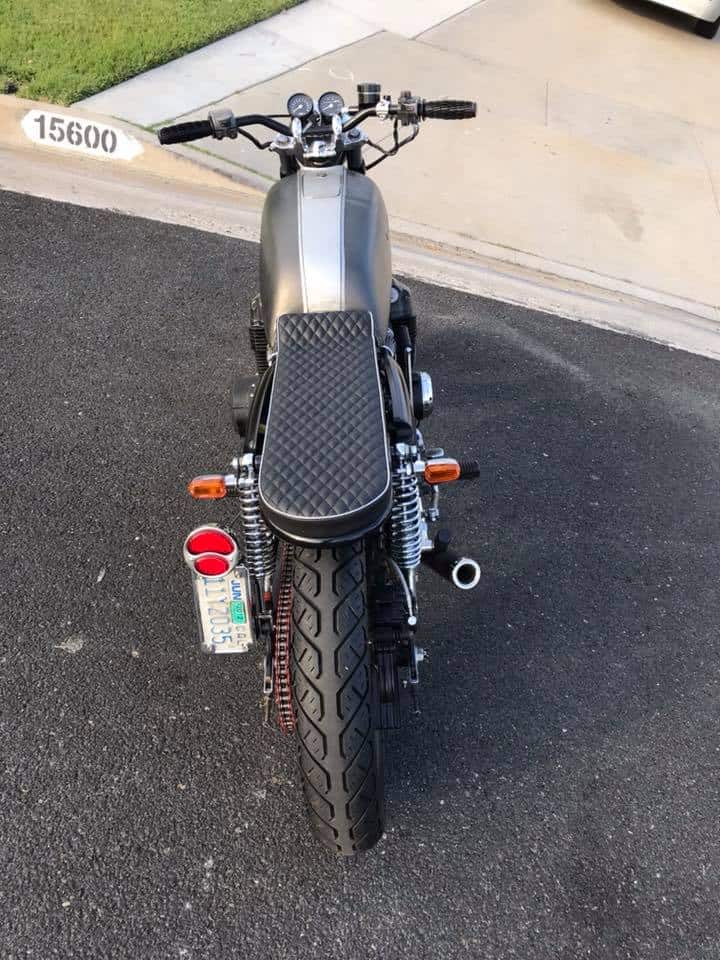 This 78F has the Double Disc front end, which is something Honda should of created on the earlier models, but I had to make new lines for it, went ahead and made some braided steel ones up, took a long time to bleed but it stops on a dime now. The old Master Cylinder was totally rotted away, so I fitted a larger Kawasaki version to allow for the double disc as it needs more fluid and that worked out really well. 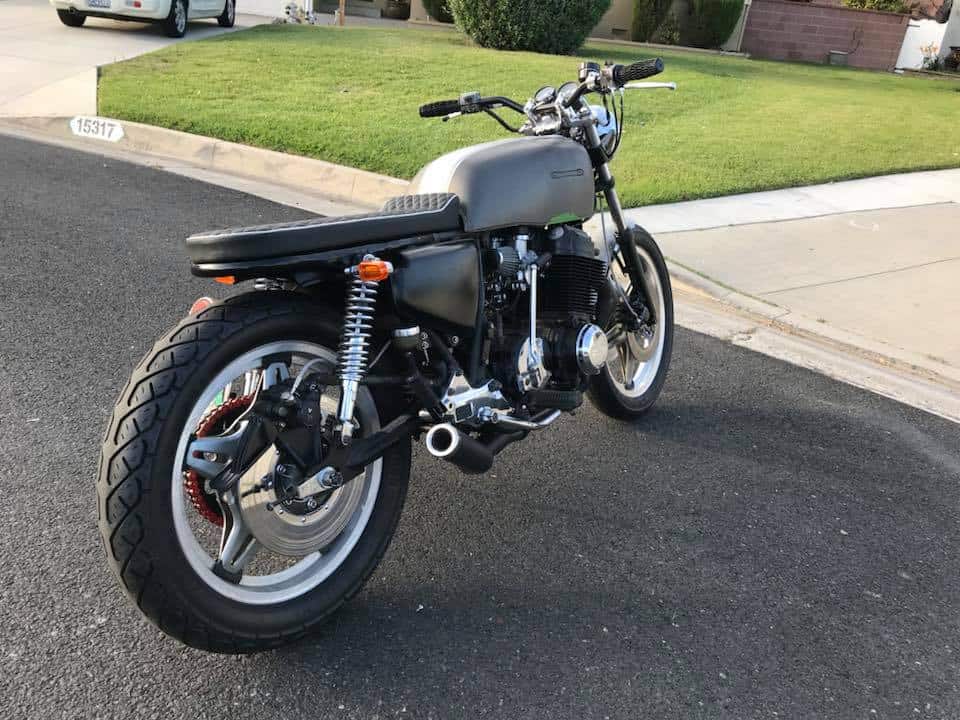 I made some New side covers as the original ones that were fitted were so brittle and cracked, these are Urethane and will last for another 40 years, I replaced the Original shocks as there was no rebound left and these are just the ticket and look like original 70’s ones but made with todays materials. The Motor was Black being a 78 F, but in need of some love, so cleaned the motor with degreaser and painted high temp wrinkle that I have made and it came out nice, added Pod filters to the rebuilt carbs and the Front fender was dented on the front and rear, so I cut the Old stays off and shortened the mudguard to give it that Sporty look.

All in all, this non runner Classic has been resurrected  to a fun Bar Hopper machine and pulls quite hard too, still needs paint and a bit of chrome but this sure was a fun bike to ride, I really enjoyed it. The Original Carbs were the keyhole version, they are fine when working but they were toast, so, I always fit earlier intakes, Cables and carbs to the 77-78 SOHC Motors as you can remove the float bowls with the carbs still on the bike, also the choke is a lever on the side, not the ugly cable that goes up in between the gauges, runs smooth now too.

Here is a Video of a little try out in my area to see how the carbs are dialed as this was the first real time on a major road, I loved this bike as it had linear power, have a look and see what you think.