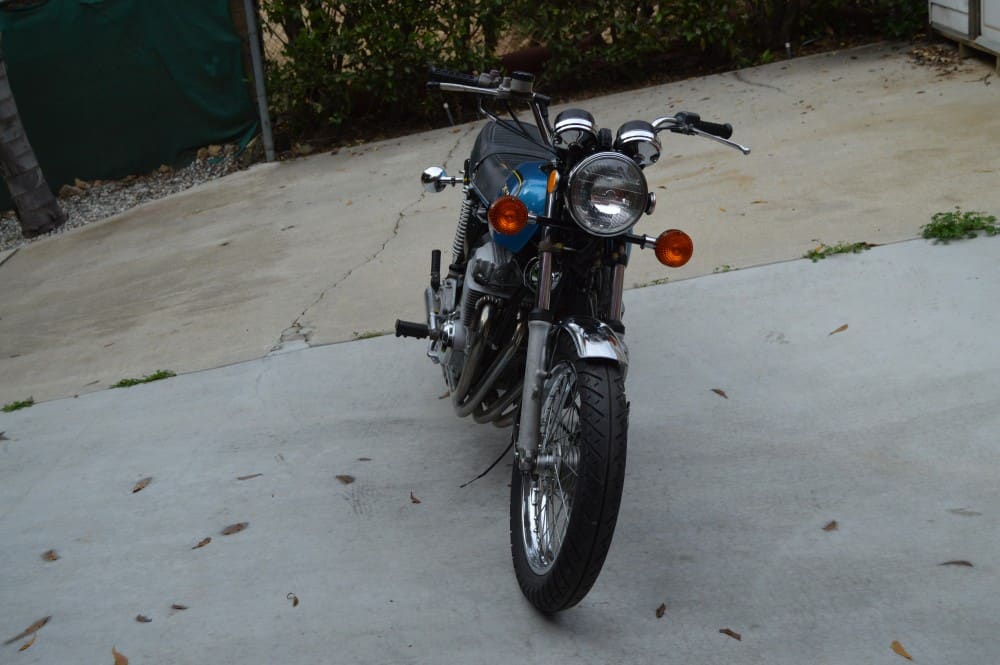 I never know what may turn up at the workshop these days and this time I was surprised to unload a pretty clean 1975 Honda CB750F Super Sport , this has only 8000 miles on the odometer and is a one owner machine that a Customer just purchased locally and then bought it along to me to see if I can get the motorcycle to run and ride once more.

This Honda SS had been sored away for a while so the normal things will need to be addressed to be able to get the old girl to function once more and give the new owner miles of smiles. 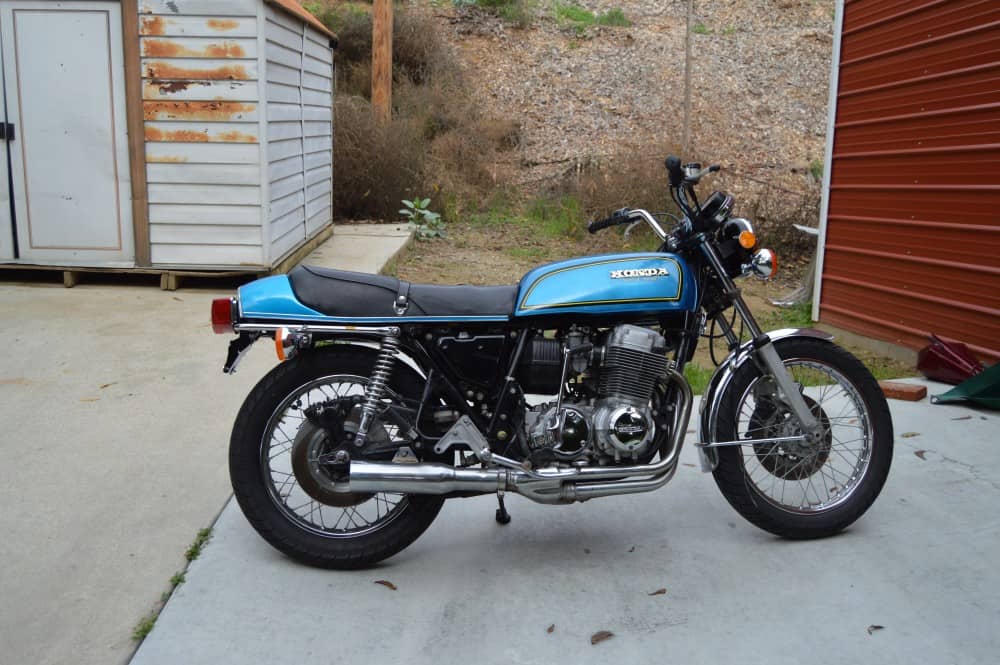 The bike is pretty much as stock as a rock, the only thing missing is the big Cannon tailpipe and the side covers, I make the side covers so that will not be a problem but the tail pipe may be another story, but the bike has a tiny battery that is dead, I will need to order a New one for her to be able to get this girl cranking over, but I shall take one off one of my own projects to see if I can get the old girl to fire up again after a long slumber. 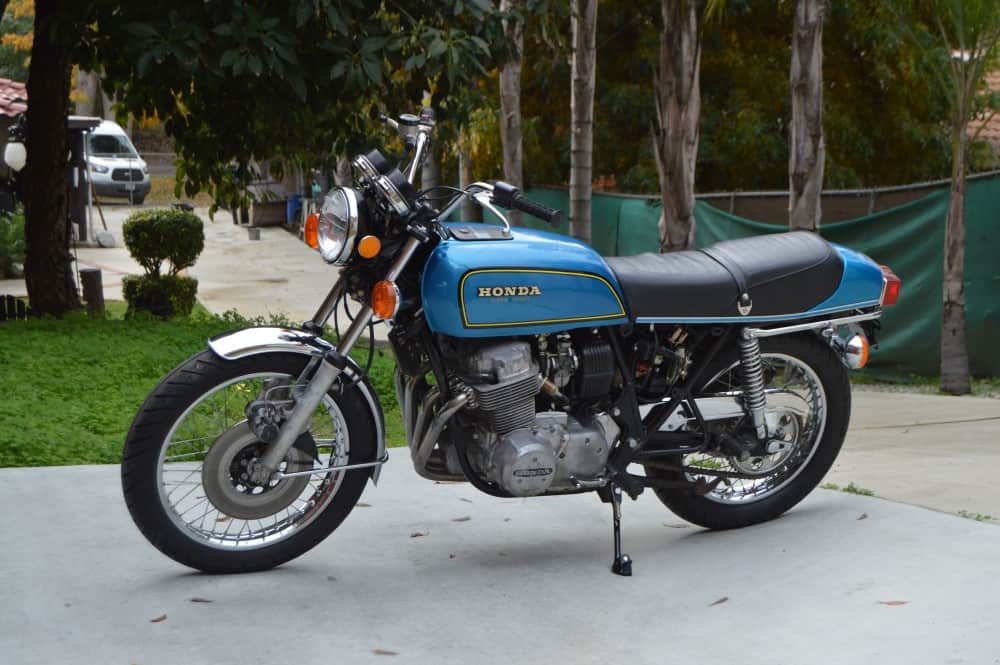 It really is in good condition for its age, remember , she is now 47 years old, and I expect her to be a little stiff in places and get stuck from standing in a garage all that time. 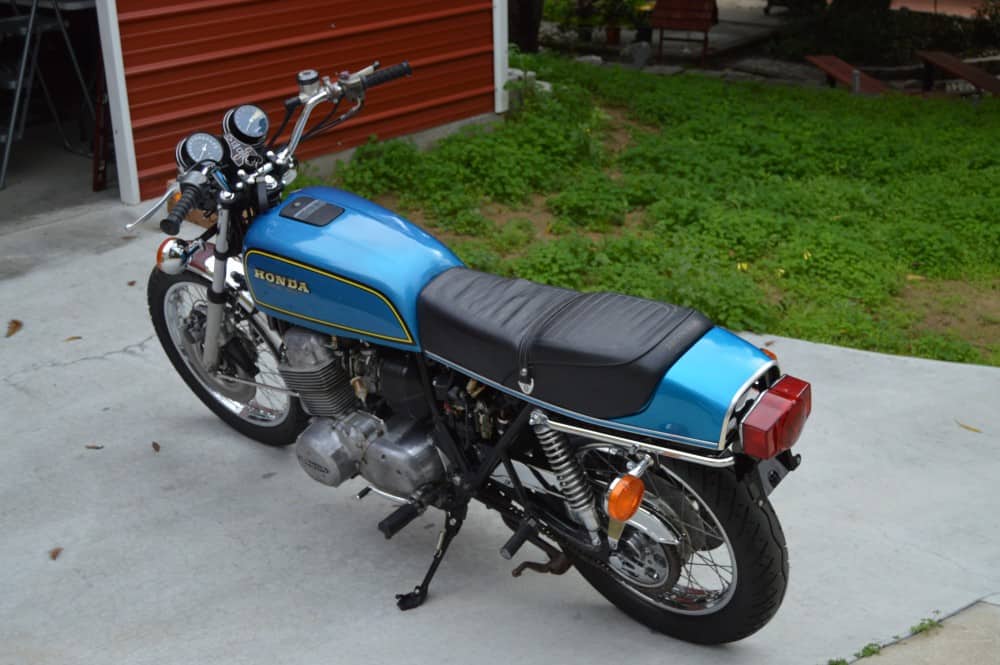 On inspection the Gas Petcock had a lot of Brown sticky old fuel around the lever, so knew that the carburetor would be in dire need of stripping and completely overhauling to give her a brand new life once more, as the gas in California is awful, and in less a month, fuel will start to go bad and tarnish the carburetors and also the gas tank inside, causing blockages inside the fuel journals and then I have to vapor blast them to get it all clean and look like a factory finish. 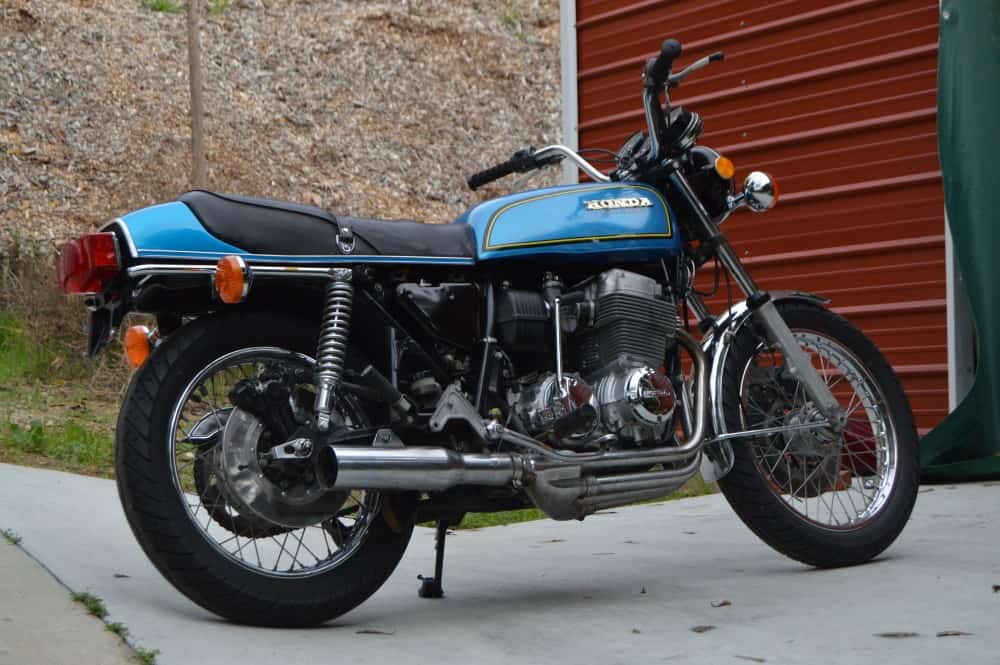 I had quite a task of pushing the inline four into the workshop, as the front brake was sticking like an egg in a pan with no oil, so to free the piston in the front caliper, you have to tap it with a rubber mallet, it tells me right away that the piston has rust spots from years of sitting in hot and cold temperatures and this stops the piston from letting the brake pads fully release.

So a full strip and rebuild will be necessary to get the old girl to move freely once more, I have no worries fixing this as its a common issue due to the caliper body being an aluminum composite and the Piston is made of polished steel, the piston gets small rust deposits on the outer part and catches the O Ring and wont retract unless you bang the caliper body with a Rubber Mallet, so all New parts soon and I can get that all taken care of. 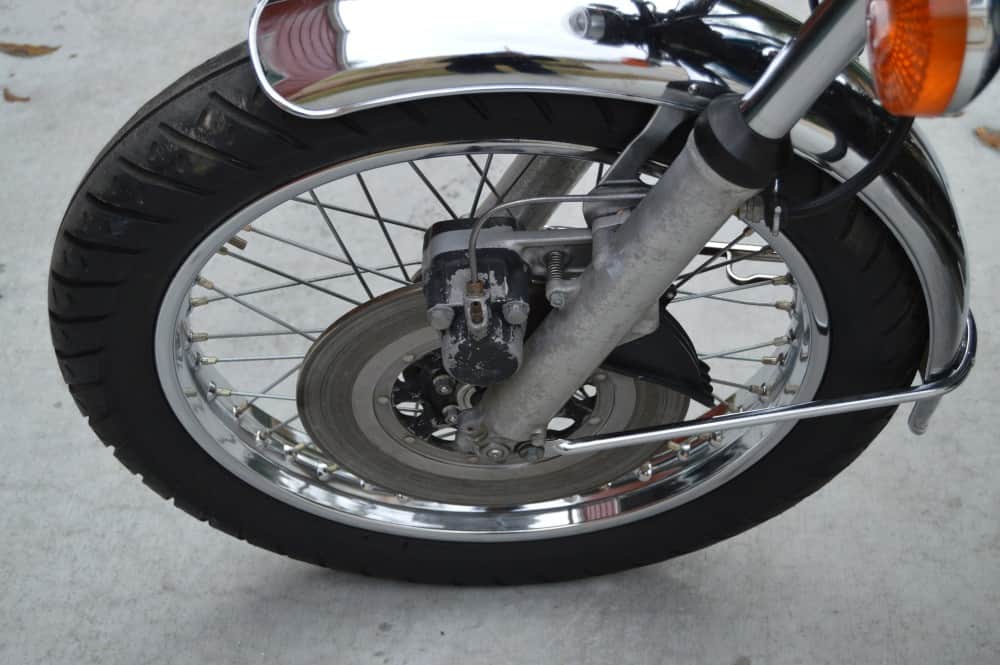 The Carbs will be pulled but may try to run the old girl using a Lawnmower gas tank I rig up and run Fresh fuel through the tank of the the auxiliary jig I made and right through the carbs, as I fear the petrol tank has some rust in it and will need to clean that out too, but I will run the bike through the auxiliary just to make sure that the engine is running ok and no issues with gearbox, clutch and maybe check for any oil leaks from the cases or cylinder head etc. 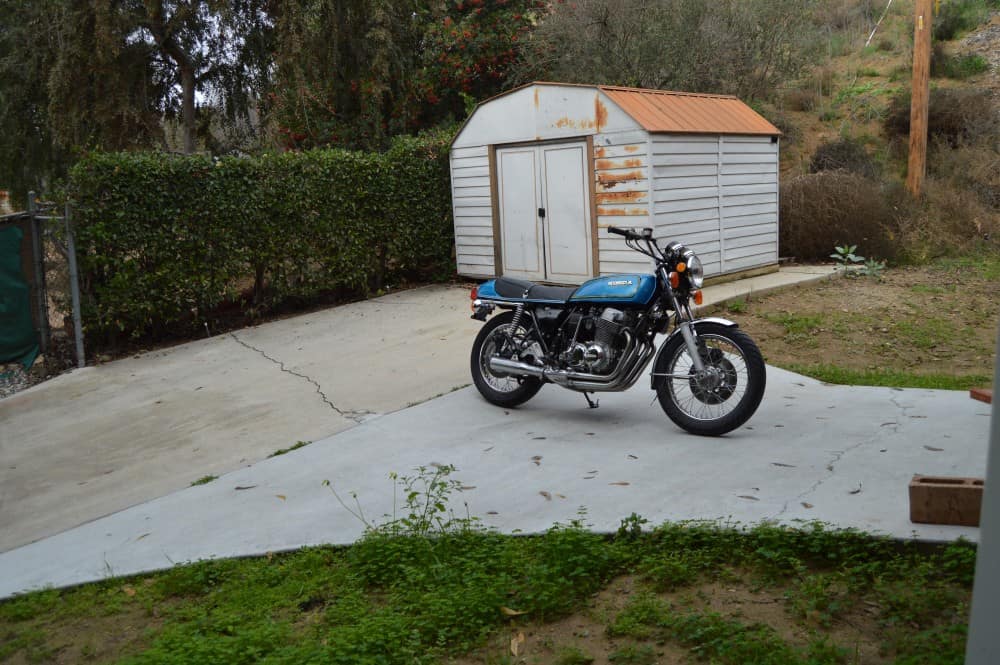 Once I remove the carburetors, I can take apart, vapor hone, Polish and synchronize to get this inline four 500 pounder purring once more, these are great engines. 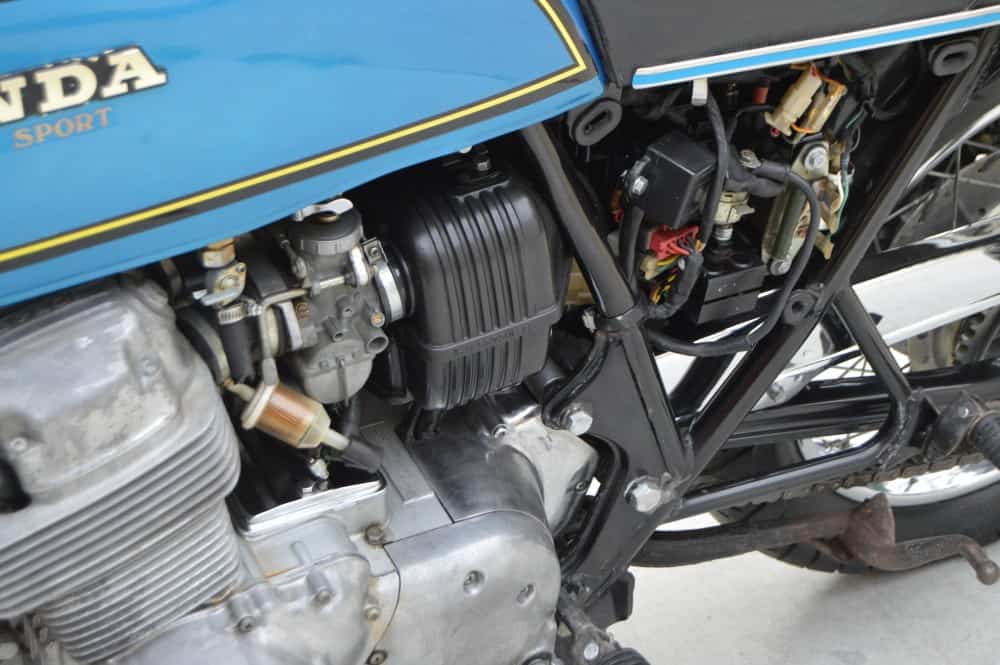 The airbox is always a royal pain to remove and refit but I have done it many times, just have to be patient to be honest and plenty of WD40 at hand to ease the parts out.

Eight Thousand Miles on the bike, that’s super low, just was not ridden much by the original owner and a great find to the new person that found it by chance, stoked for them, the display cluster is in really good condition and gauges are not broken or scratched either. 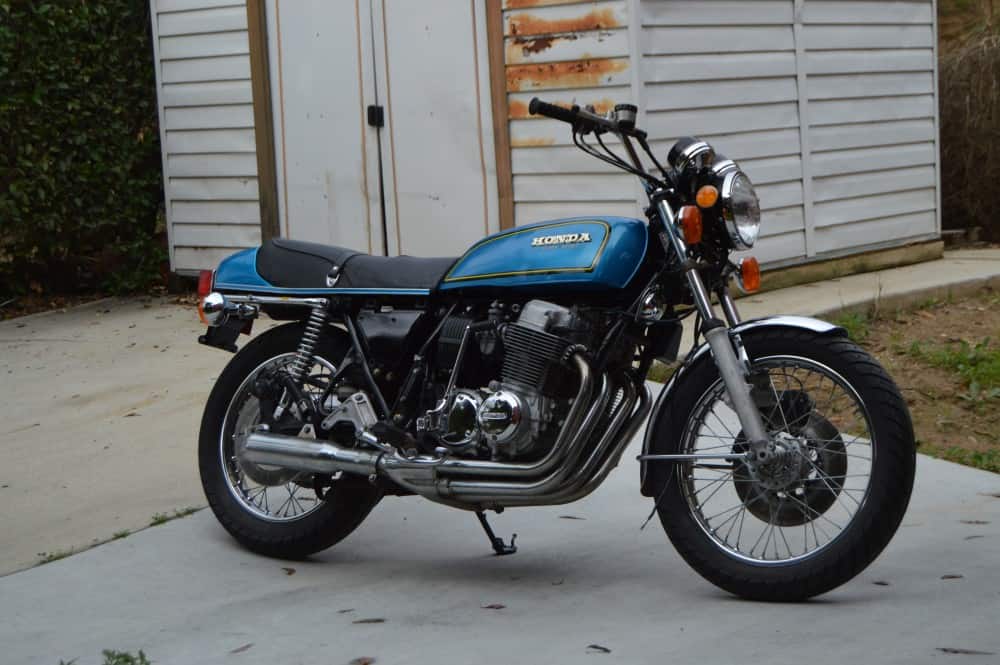 The year 1975 saw the introduction of three F models, the 400F, the 550F and the 750F. That 400F was truly trick, with mildly set-back footpegs, a flat handlebar and a lovely megaphone-styled exhaust. However, the company decided to go the conservative route with the 750, apparently more concerned with bringing four-piper types into the sporting world than with luring crossover owners from the Ducati realm.

This is partially a retelling of the making of the most significant motorcycle of the last 50 years, but it is a story worth hearing again. There was nothing new about disc brakes, electric starters and overhead camshaft, transverse-mounted, four-cylinder engines in 1969—just that Soichiro Honda had made them cheap and reliable. The CB750K was a winner from when it left the starting gate, but everybody knew that winners get old.

Which is when the styling artists got their orders. The K was OK, and would remain the mainstay of the lineup, but something snappier needed to be on the showroom floor. Not too snappy, mind you, not like a Laverda 750SF nor an MV Agusta 750S, but something to provide at least the image of snappiness. 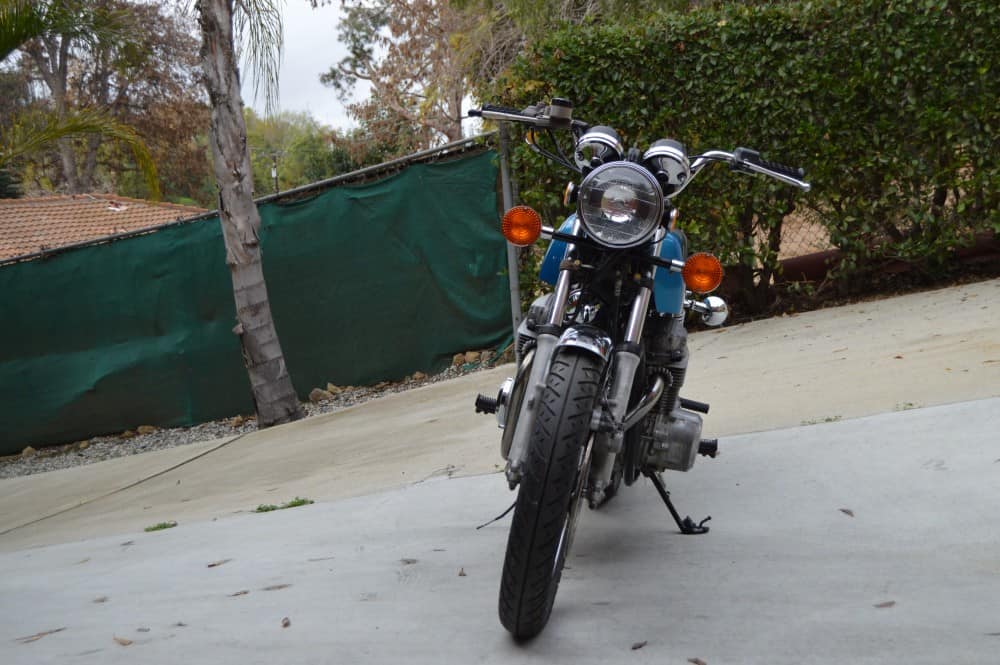 Call down to the muffler department and tell them to make a four-into-one exhaust system. Have the sheet-metal guys stretch that gas tank out a little, not much, just a smidge to give it a slightly elongated, racy appearance; and hide the gas cap. Then tell the seat people to make a little fiberglass extension to fit the back of the saddle, sort of a faux bum-stop that some single-seaters had. The fast look was born.

Of course the frame and engine departments were given their chores. The chassis mathematicians figured that Super Sport riders would go a little faster than those on the standard K, so they gave the fork an extra degree of rake, to 28 degrees. Along with 3⁄4-inch more trail. And left those ugly gaiters off. Built a slightly longer swingarm, which added up to a 57.9-inch wheelbase, 6⁄10-inch longer than on the K. This meant that when the F rider was trickling along U.S. 2 in North Dakota at a modest 100 mph, the bike was reasonably steady.

Power was another matter. Honda did not necessarily like to advertise horsepower ratings, but dynamometers don’t lie—unless they are hopelessly miscalibrated, in which case it is not lying. The F put out a good 10 percent more ponies than the K, and while some of those 58 horsepower, at 8,000 rpm, could be attributed to the freer flowing qualities of the four-into-one exhaust, the rest came from a slight boost in compression ratio, using domed pistons, up from 9:1 to 9.2:1. And the timing specs on the valves had been altered to adjust to the new exhaust. Also the carburetion was cleaned up a tad, in those halcyon days before the EPA, with the best of intentions, made a botch of things.

The F, with a full 4.8 gallons of high test in the tank, registered slightly over 535 pounds on the scale. Which was 10 pounds heavier than a K, although the F had three less mufflers. Possibly a little extra metal had been included in order to strengthen the double-cradle frame, with triple tubes, a main and two auxiliaries, running under the tank.

Put the leg over the saddle, and the rider sat pretty high at 32 inches. Pull the choke on those four 28mm Keihins, turn the key, and choose between pushing the button or kicking the starter; 999 times out of a thousand, the button won. Vrooom! The muffler had a mellow, unobtrusive sound, the engine warmed quickly, and the rider was away. 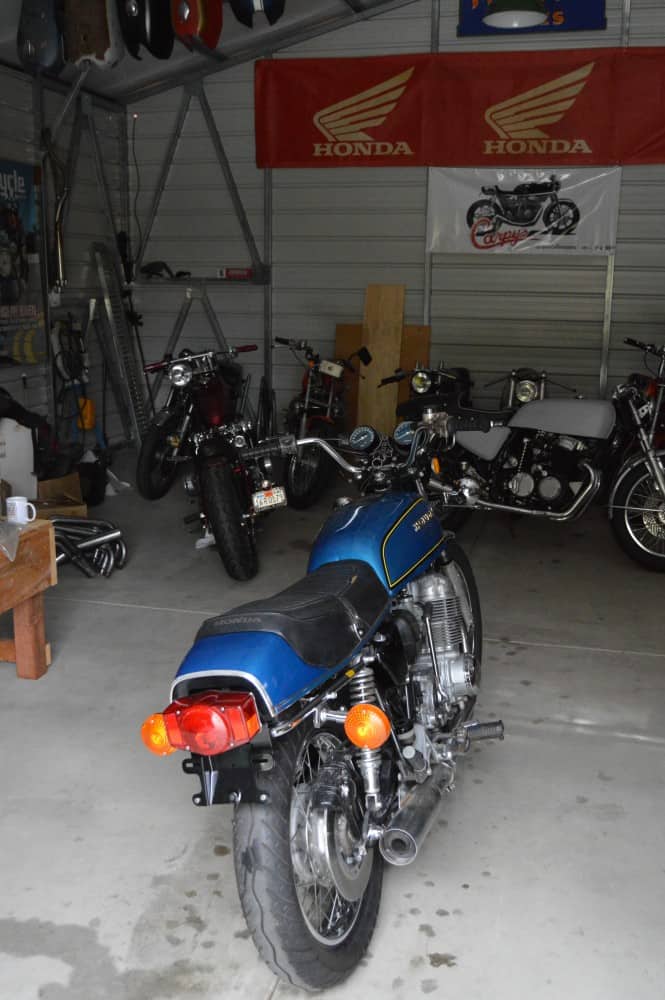 Twenty miles down the road, the Bridgestone Super Speeds were heated appropriately, and the twisties began. Tire technology was still pretty basic 40 years ago, but the 18-inch rear and 19-inch front spoked wheels each had a disc. Hit that first sharp left hander at a rapid speed, and the F felt really good. However, coming back at the same speed, the corner now a right hander, there would be a Grounch! as the collector box located beneath the right footpeg touched down. A little help could be had by getting out the toolkit and maximizing the preload on the shocks, but even then, a 200-pound rider was going to mar the chrome. The owner of this CB750F has changed the shocks to S&W, a distinct improvement.

Other than that minor drawback, the F did live up to its sporty intent. It probably was the best-handling of the Japanese 750-plus fours of the time. And got better.