It took many many hours of trying this, trying that, shouting out a few bollock related words here and there, but finally it is dialled in.

Here we are with a touch of Nostalgia and a bike I have been putting together for a while and have actually changed it’s guise many times, but- I think I am pretty much there right now and as soon as I have a title for this bike, she will be up for grabs, although, the more that I wrench on this machine, the more I am going to ask, as this bike has more parts than the Six million dollar Man,. 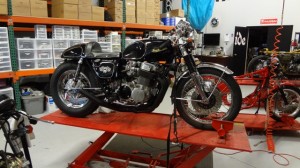 The Speed master should be a fun ride for someone out there, and i hope to at least put 100 miles on this girl before I attempt to let this classic go to a new owner.

OK !    Let’s see, as I have done a ton of work to this machine and need to rattle the old noggin, to try and remember all the cool parts and bits and bobs that I have fitted to this really cool Classic British styled Cafe Racer in line Four that I have created. 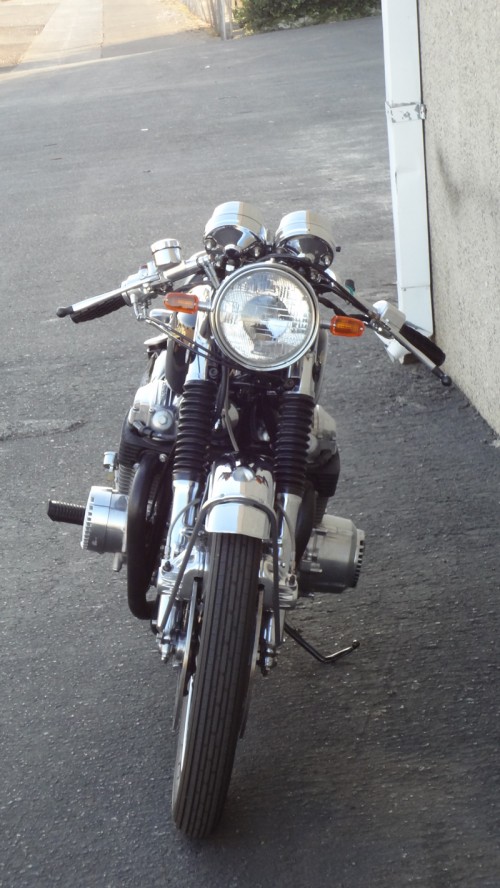 The bike is a 1973 CB750-Four Honda and here are some of the many things that I have done to this thoroughbred of a machine. 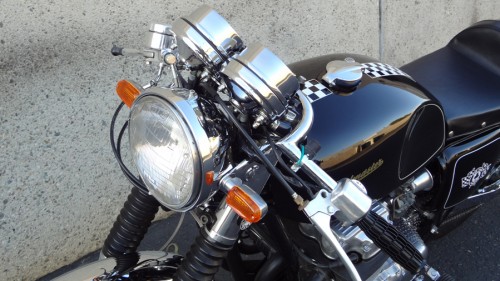 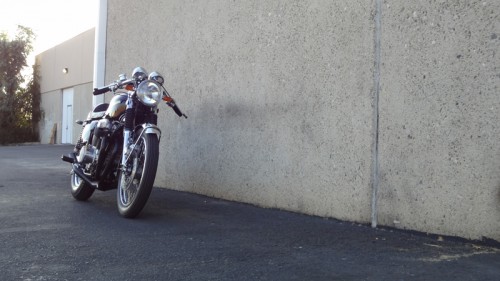 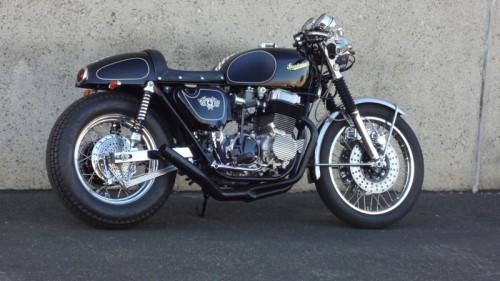 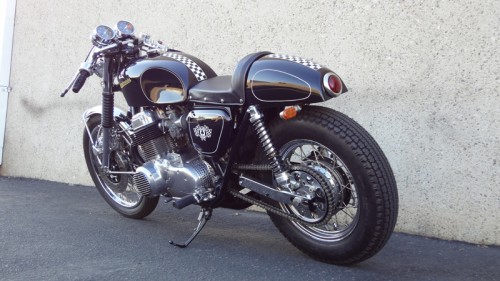 Here are the Gauges that I took apart, made the faces and then put back together and used Original Chrome Covers. 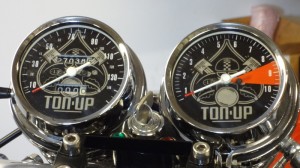 The Motor was taken completely apart and then an 836 Wiseco kit installed. 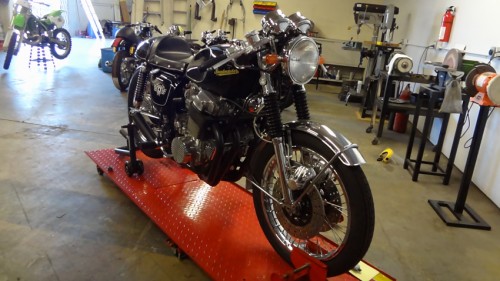 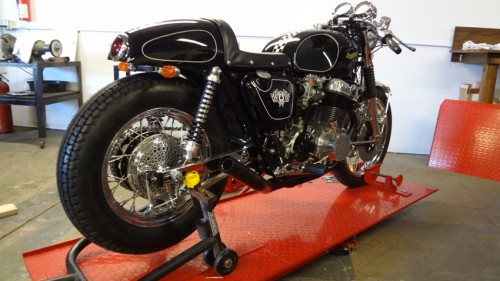 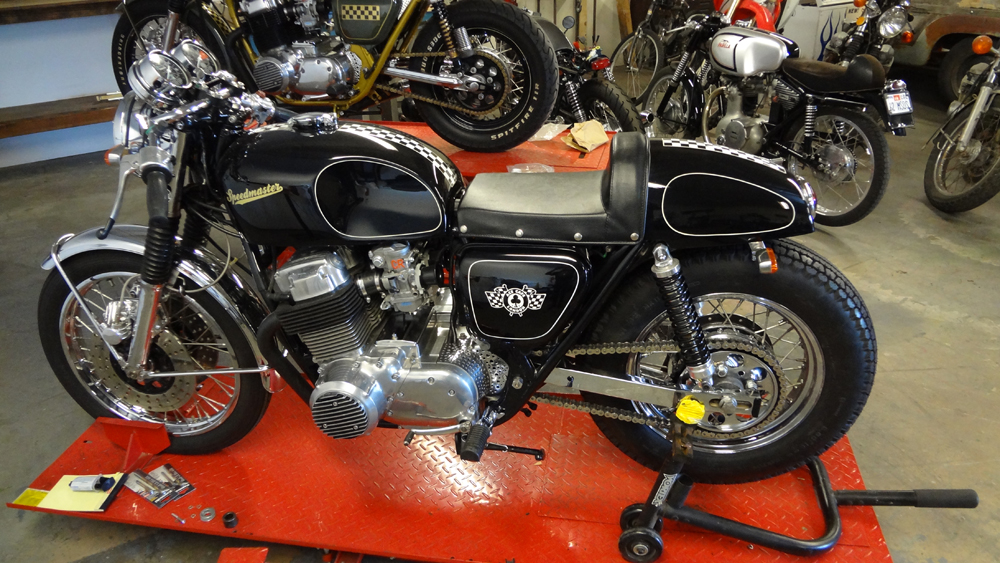 The jugs were wrinkled High temp Black and the valve train cover was polished to a Chrome polish finish at home in my garage. 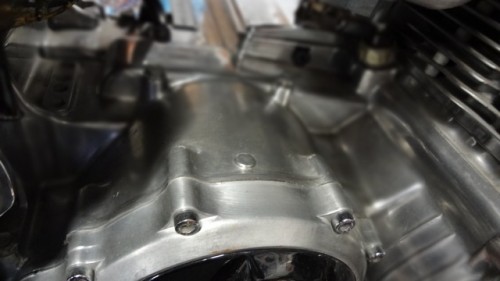 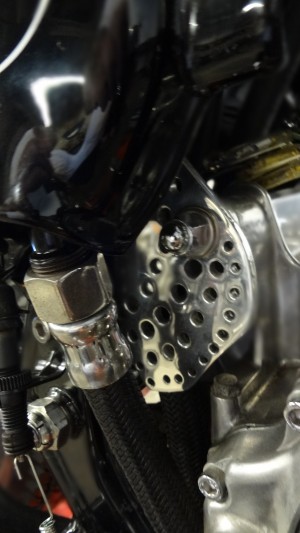 The carbs were fine, but- I wanted to revamp the whole set up, so this time I removed the old Rack of 4 and treated myself to a brand spanking new set of 29mm Smooth bore Cr Carbs from Sudco, who are out here in California, these now have new intakes on the head, as well as stainless steel hose clamps etc,. 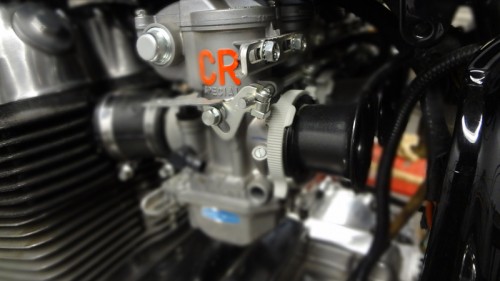 Of course, I added new throttle cables too and from there, things just seem to continue to grow, although this has had many guises, as I have had 4 different exhaust  systems on here, but I finally decided to use my own 4 into 1 system, of which I have taken a long time to develop and hone, and this exhaust is the Bee’s knee’s, it barks like a hungry dog and then some. 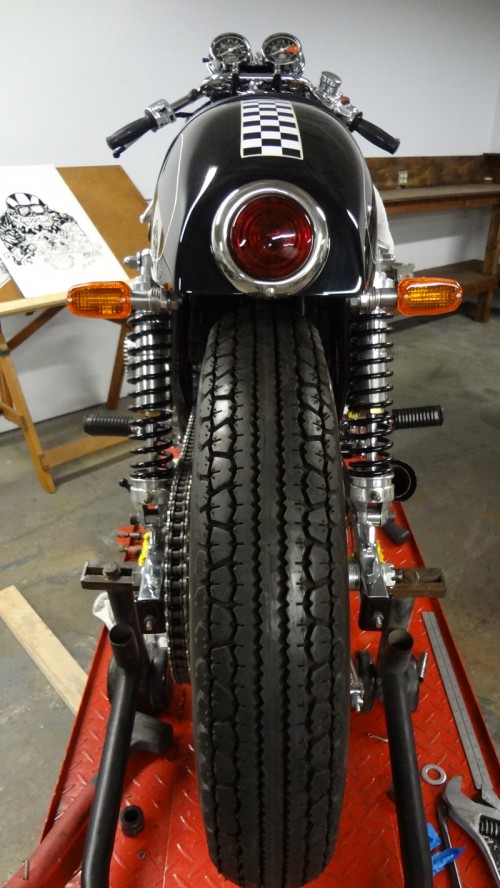 Also, I fitted new electrical wiring and polished the handlebar controls, something that I personally like to do and has become a trademark in what I do.

I used my trusty  old chrome Clubman handlebars of which I used Original 1970’s GT grips to add to the Nostalgia on this mean machine. 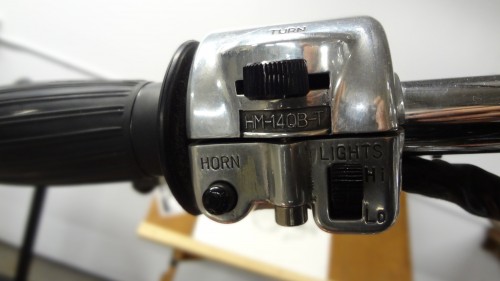 I then went to town on my stock gas tank and by hand, I hammered the sides to represent the old school gas tanks of back in the United Kingdom, as that’s where I grew up and obviously was heavily influenced in the Cafe Racers of the day. 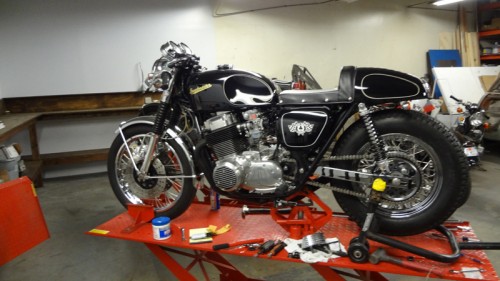 Next up was to decide what seat base I was going to use, and, after 4 seats, I decided that my own Rocket 4 seat base was the way to go, and I am glad I chose this style.

The bike sits well and is on New rims and tires too, something I racked my brains over as I was trying to decide what tire pattern to go with, but then the little light bulb in my noggin came on.  ” what about the tires of days gone by?”   That’s right, I will see if I can buy a set of the old Avon Speedmaster tires as they were so common when I was a teenager in London.

So, I sourced the Speedmaster’s and that’s how I got to name the bike, but, I also used a similar font to the British Iconic bike, the Velocette. 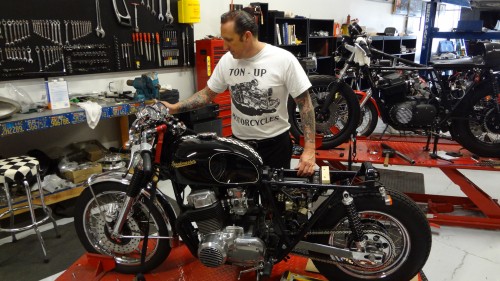 To add some of my interest in Road Racing, I chose to make a copy of my original swing arm that Dave Degan used to make, the Dresda swing arm was the way to go for racing back in the day, as it stopped the rear of the frame from stressing and making the rear of the bike step out.

I actually made a 2 inch extended version of this and then took it to the Chrome shop to make this stand out and give the bike a little more contrast.

The rear tail light is a round stainless bezel with a real Dark red glass lense and really does do the bike justice on the rear of the seat.

I have fitted some rare S+W shocks, I love the look of these and have had them shocks sat in my garage for almost 12 years and they are from about 1974 era too with the air adjuster nozzles still on them. 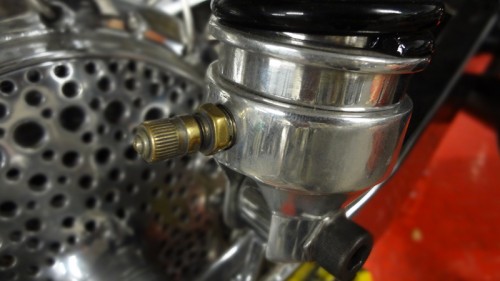 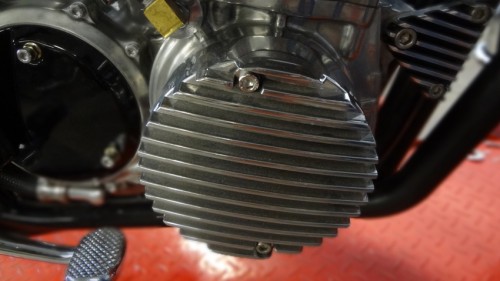 I have fitted a new non- maintenance Battery and also a Battery Tender lead, so you don’t have to worry about that, and also I have added a solid state regulator so no more charging issues etc.

Clubman handlebars have Polished aluminum clamps with a chrome holder, and the gauges are now rebuilt and re-faced etc with original 1970’s chrome covers etc. 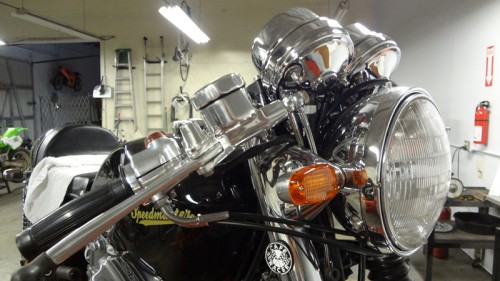 And I have fitted New Speedo and Tach cables, as well as a new clutch cable and adjuster etc with new polished levers.

If you look up at the front of the bike, you will see I have added two drilled brake  rotors, this is a great look, I then got two calipers from a 1972 model and took them apart, cleaned and honed them, added New O-Ring etc and polished the bodies to a chrome finish. 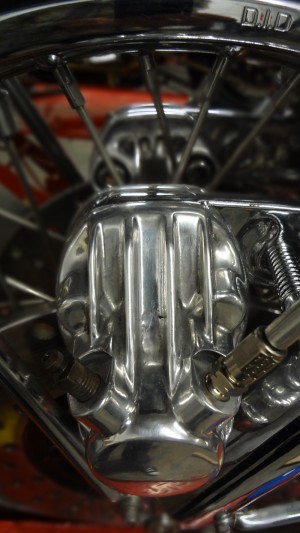 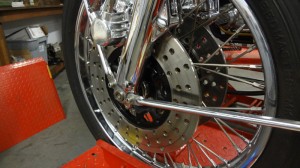 I then made up some braided hose lines and then bled, the bleeders are new too with new brake pads too.

The rear brake hub has my signature drilling as well as New actuator, New Brake arm, New Brake Rod and spring with the nut and of course, New Brake Shoes and springs. 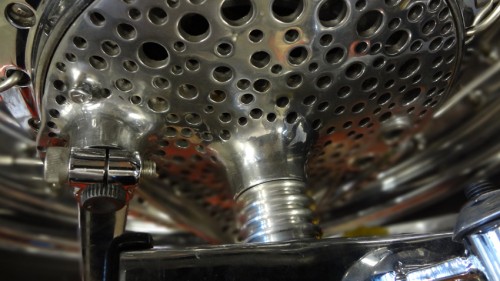 I then fitted my finned aluminum stabilizer bar and this looks pretty cool from the side now. 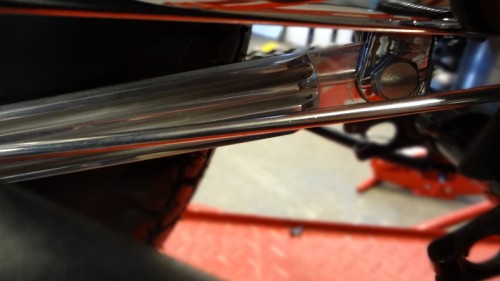 Of course the 4 into 1 in Black is a good contrast too.

I have still to get a title for the bike and shall be doing that soon, as I get the police to come and verify everything first and then I usually get a title in less than 4 weeks.

The bike fired up the other day and I shall ride it for a 100 miles, and then I feel like she is OK, this will be available.

I like the bike, she sits well, looks the part and with any luck should really turn some heads, if I can, I shall try and add some video content for you to see and hear, that way you will get a better over all perspective of this cool classic Cafe Racer motorcycle.

This really is a lot of motorcycle and you can see how many hours has gone into this creation, I am not quite finished yet but you can see the seat base is my infamous Rocket 4 set up and that has the stainless steel round tail light with the Glass lense.

Then it was upholstered with vinyl and snaps for the old racing days look, then hit with gloss black, checkers and the pin line to accentuate the 1950’s era of Europe.

This has all sorts of New parts and just fitted New hub bearings 2 days ago in the rear wheel, as well as brand new brake rod and I fitted a New brake switch too.

This is a long wheel based bike and not a light bike at that, probably still in the 400 pound region, and sits and looks the part, as I am sure you are now interested in the completion of this machine. 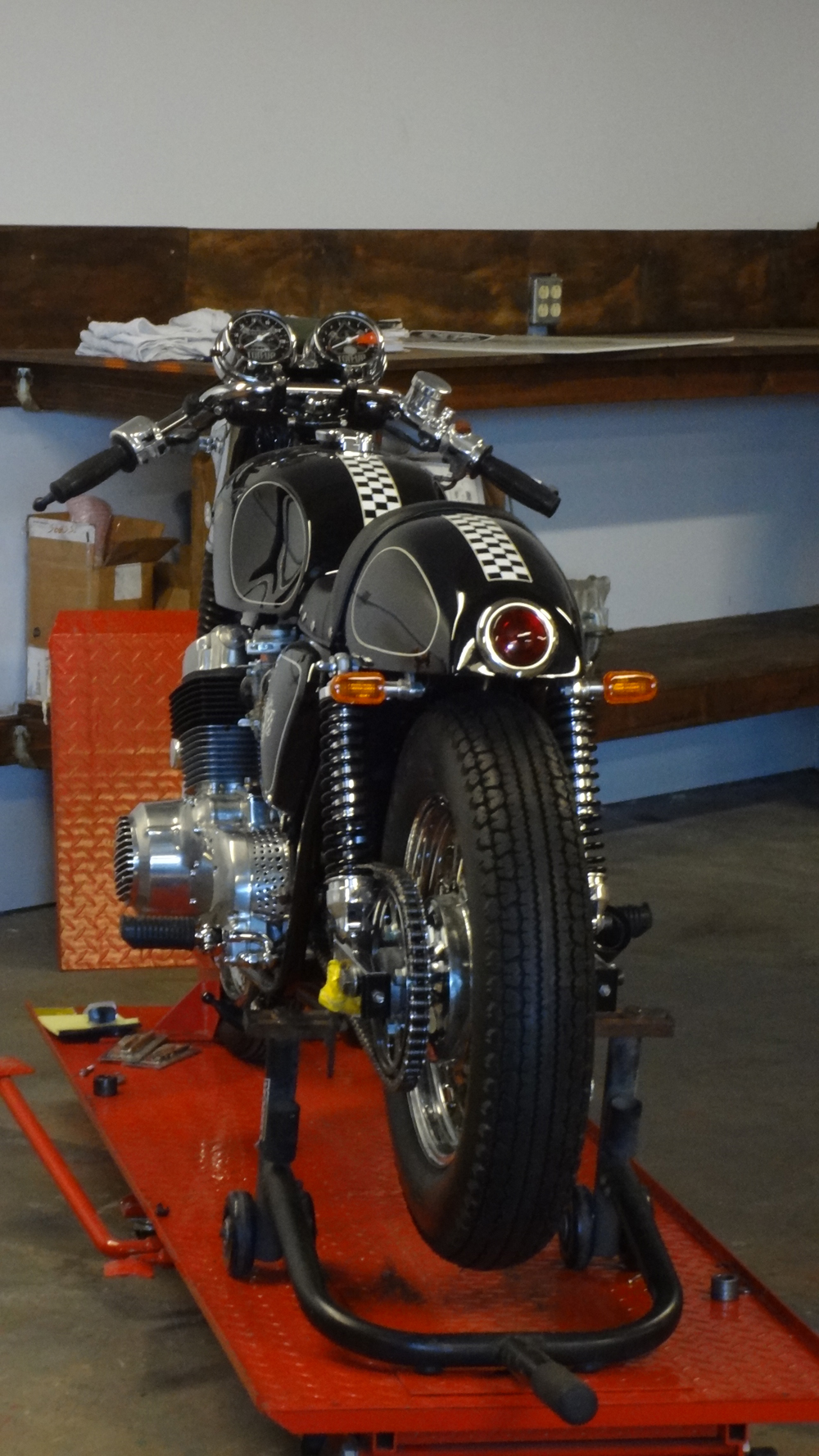