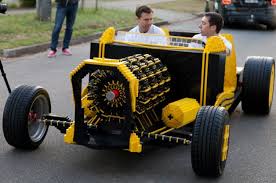 So- Kids not playing with their lego over the christmas period? Have some fun with it, maybe you can top this fella?

Be warned people, be warned. I showed this video to my Lego obsessed 5 and 7 year old sons and they flipped out. More specifically they flipped out, ran upstairs and then I heard the noise. You know the noise if you have kids. The noise that sounds like a huge monster that barfs little plastic blocks blowing chunks all over a hardwood floor. I knew that they were going to try and build a Lego hot rod like this one in the video. I calmly explained to them that they didn’t have half a million lego pieces like teenage builder Raul Oaida. I then made an excuse that this would be totally illegal to do under US law so now the kids want to move to Romania. It was probably the wrong thing to say.

Anyway this is a pretty cool deal by our estimation. The car is supposed to look like a hot rod and we can see that. It actually drives under its own power as it has four big Lego radial “engines” that provide the power. The car has a compressed air tank on it and when the valve is opened it feeds air into the four huge and all Lego radial engines which then spin a driveshaft (made of Legos?!) which as you know turns a differential and sets the whole works in motion. Sure it doesn’t haul ass or do burnouts, but jeez, give the kid that built this thing a little credit.

Because any adult person with children knows that Legos are about as expensive as jewelry you’re probably asking, “How did a Romanian kid afford all those Legos?” The trick was that he didn’t afford them, an Australian businessman named Steve Sammartino bankrolled the build for reasons we’re not too sure about but the results are stunning. It should be mentioned that Oaida is a technological prodigy/genius so this was probably a hum drum accomplishment for him, meanwhile back at the ranch when I get one of the kid’s Lego boat kits all together I feel like Steven Hawking. Small victories Raul, did no one teach you about small victories?

Here’s some factoids that the guys who posted the video put in the description:

– The engine is made from standard Lego pieces and runs on air!
– The engine has four orbital engines and a total of 256 pistons.
– More than 500,000 LEGO pieces.
– Top speed around 20-30km (We drive it slow as are scared of giant lego explosion)
– Built in Romania and shipped to a secret location in Melbourne.
– It’s a Hot Rod design, mainly because hot rods are cool.

Congrats to Raul and Steve! This is a neat deal because it runs and is actually close to real life scale. I need to scope out a Romanian real estate agent.

PRESS PLAY BELOW TO SEE A LEGO CAR BUILT WITH 500,000 PIECES DRIVE ON ITS OWN!