BIRDS ON BIKES!!!!!!!
Well, you have to admit, if you are a bloke like me, there is nothing better than seeing a Girly on a motorcycle, Black leather, curves in the right places and blasting down the road hitting the Magic Ton is something many of us have hoped to see, and now- things are indeed changing and we see more and more Birds on bikes.
Women have ridden bikes for years i know but back in the 50’s and 60’s you didnt see many on them in magazines, unless they were just modeling for the company, this now brings me to the infamous Anke- Eve Goldmann!
What a Girl, a great rider, a great looker and one of the top Journalists in motorcycling history.
Goldmann taught German to airmen’s children at a U.S. Air Force base in Germany. She was the first woman to ride a motorcycle with a one-piece leather racing suit, made for her by German manufacturer Harro. She rode BMW motorcycles and became a spokesperson for the marque before buying an MV Agusta. 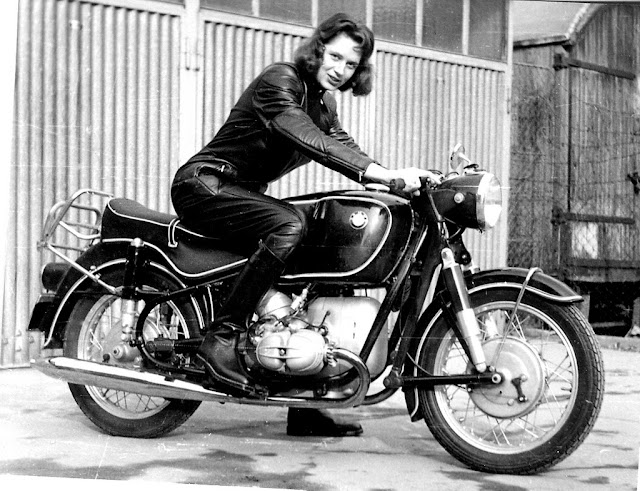 Goldman was a friend of author André Pieyre de Mandiargues and the inspiration for the main character, ‘Rebecca’, in his most popular book The Motorcycle (1963).

The book was adapted for the 1968 film The Girl on a Motorcycle starring Marianne Faithfull. From the 1950s, she competed in endurance and circuit racing, at the Nürburgring and Hockenheimring but being a woman, was barred from higher level competitions.

In 1958, she helped found the Women’s International Motorcycle Association in Europe.

She gave up motorcycling after the death of a close friend.

At 6 feet tall, she stood out in any crowd and especially clad in Black leather, she was a natural with Motorcycles and could ride the socks off the damn thing.

This did not dissuade her from seeking fast motorcycles and race tracks; in many photographs she is hurtling down the tarmac, and mixing with other motorcyclists at Hockenheim and Nurburgring – such as here examining a Norton Manx at Nurburgring.

Her ‘pass’ at the tracks, beyond her riding ability, was a facility with writing a good story for the press, and she regularly sent racing and riding reports to Moto Revue in France, as well as publications in Spain, Sweden, Germany, the US, and Japan. Here at Hockenheim, she waits for track time with a pair of Jawa two-strokes and a Zundapp outfit – her suitcase strapped to the parcel rack of her R69. 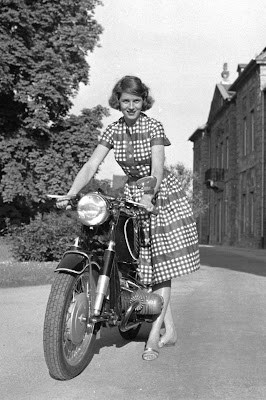 She worked at a U.S. Air Force base, teaching German to the children of soldiers stationed there. She also spoke other languages, and her command of English was good enough to write two articles for Cycle World magazine in 1962. ‘An Invitation to a Lap Around the Nurburgring’ was published in the June issue of 1962, and a report on women racers in the Soviet Union (!) was printed in October of that year [and yes, I will definitely post it]. In this photo, noted motorcycle author Erwin Tragatsch, author of the definitive ‘Illustrated History of Motorcycles’, stands with a group visiting Anke-Eve with her late-model R69S, now with a British ‘Peel’ fairing (distinguishable by the clear panel in the nose – the headlamp is not mounted to the actual fairing, but is retained in the standard position. The clear section is elongated for a full sweep of light). 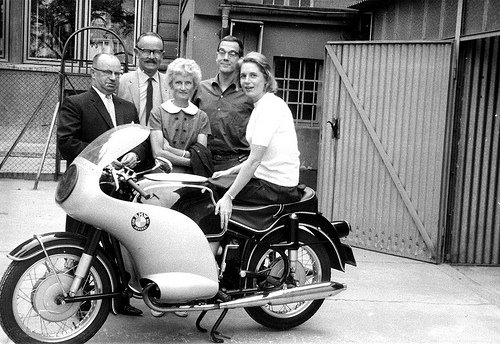 And don’t you wish your Elementary School teacher rode a motorcycle like Anke-Eve! She cut quite a figure in those drab days of the late 1950s, and had a bit of an exhibitionist streak. 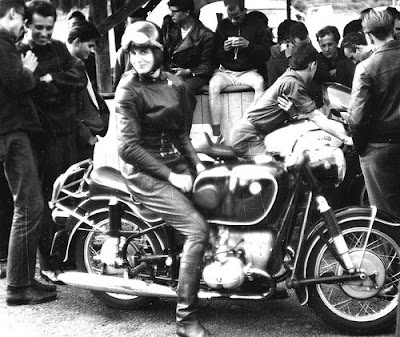 find it especially interesting that Goldmann designed her own motorcycle racing leathers. Apparently she worked with German leather riding gear manufacturer Harro in designing her custom riding gear. I’m presuming there wasn’t much in the way of motorcycling gear available for women in the 50’s so she helped create her own.

The custom summer one-piece riding suit she designed had a distinctive diagonal zipper starting at the neck and angling across her upper torso. A look that is certainly current today in women’s fashion. Harro went on to manufacture her designs for public consumption.

In winter her jacket featured a wide multi-buckled belt, too large to be merely a kidney belt. Perhaps it helped keep her warm in cold temperatures. Her winter riding suit was significantly bulkier and larger than her svelte summer cat-suit, and clearly accommodated woolen under layers.

After her closest friend died in a riding accident, Anke-Eve Goldmann seems to have given up motorcycles altogether, and began to travel with a backpack to remote Asian locations. Traveling alone, she trekked through Burma, the Sunda Islands, Vietnam, and Cambodia, not many years after the conflicts there had ended. So Below, a few cool pics for you to look at of this Bird on a bike, hope you like them? 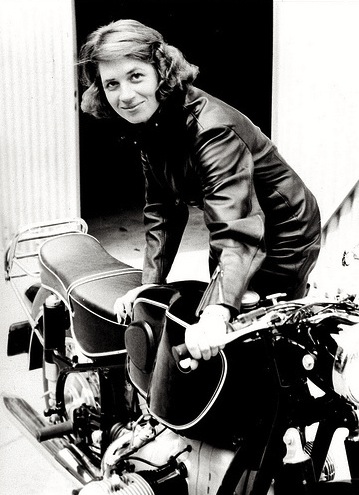 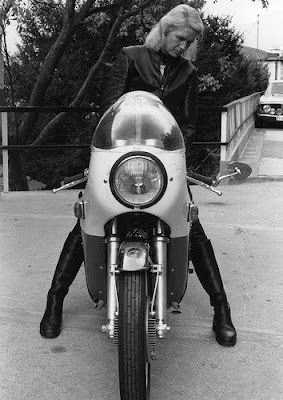 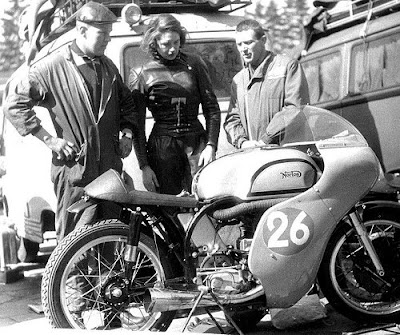 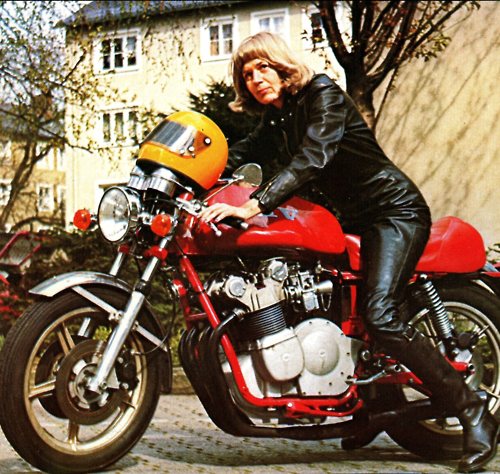 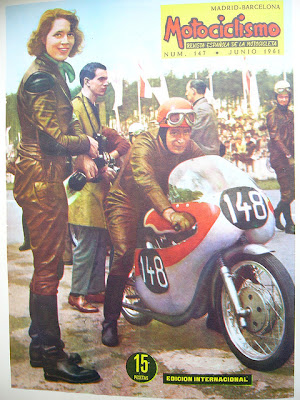 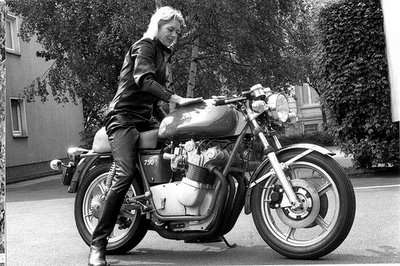 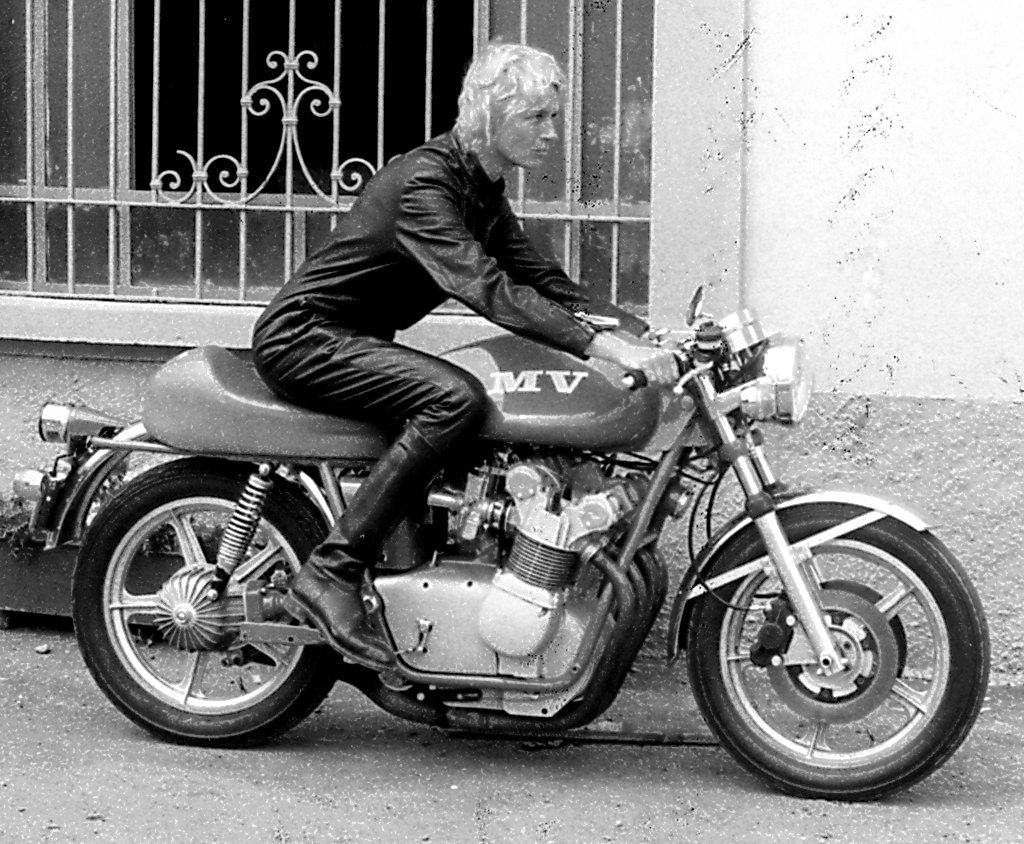 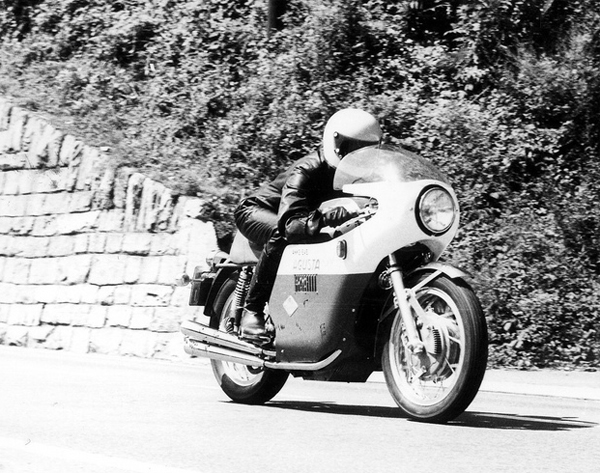 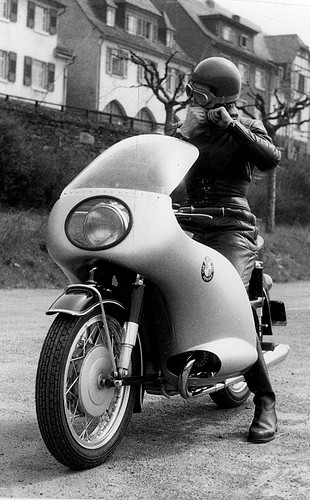 I shall be doing other blogs of ” Birds on Bikes” So stay tuned…….