Motorcycle lane-splitting — the rush-hour time saver for bikers that enrages many drivers — may be poised for formal legalization.

California would be the first state to sanction the traffic-evading tactic, already widespread on traffic-choked freeways of Los Angeles.

The state Assembly is expected to approve the legislation as soon as Thursday, and supporters believe it will clear the Senate as well.

The bill’s legislative backers cite studies showing the practice is safer than trapping bikers behind cars, which leaves them vulnerable to more serious rear-end collisions. But their proposal has riled both detractors and supporters.

“Lane-splitting is inherently dangerous,” said Thomas Freeman, a passionate opponent of the practice who said his opposition movement, hosted online at stoplanesplitting.com, has more than 1,000 members.

While some motorcyclists applauded the action, the American Motorcyclist Assn. called for even less restrictive rules.

“We don’t like this bill,” said Nicolas Haris, the association’s western states representative. “It goes a long way in the right direction, but it falls short.”
lRelated
Harley-Davidson’s LiveWire steals scenes in ‘Avengers: Age of Ultron’

Lane-splitting — a common practice in European nations — has been a fuzzy topic in California. The state has never expressly forbidden or allowed it.

Technically neither legal nor illegal, the practice has had the tacit approval of the California Highway Patrol and the Department of Motor Vehicles.

Motorcycle industry veteran Bruce Steever — who commutes on the 405 Freeway and invariably lane-splits during rush hour — applauded the proposed legislation, restrictions and all.

The AMA’s Haris, despite his organization’s complaints with the bill’s specific language and speed limits, said he hoped a new California law would inspire legislators in other states to adopt similar laws.

Legislative bodies in Washington, Oregon, Texas, Nevada and Tennessee have already considered, proposed or voted on lane-splitting laws. To date, none of the proposed legislation has passed.

The California bill, which has broad support, is being spearheaded by Assemblyman Bill Quirk (D-Hayward). He coauthored the measure with Tom Lackey (R-Palmdale), a former California Highway Patrol officer, and Kansen Chu (D-San Jose), who became interested in the topic after a staffer’s nephew was killed while lane-splitting at high speed.

The speed limits were determined with the help of the CHP and a safety study by UC Berkeley professor Tom Rice.
cComments

@WhatareyoudoingDave? My fastest speed is 72 mph and I get annoyed by drivers speed to my rear end and flash lights for me to get out of the way. I know this is a tangent but I am interested in drivers thoughts.
MICHAEL REACH
at 10:41 AM May 28, 2015

That study, scheduled for public release soon, investigated 6,000 California motorcycle accidents — 1,000 of them involving lane-splitting — and concluded that legalizing the practice was safer than outlawing it, Quirk said.

“The study found that lane-splitting was safer, compared to being stopped in the traffic,” Quirk said. “Oftentimes motorcyclists would get rear-ended. Motorists just don’t see them.”

The bill appears to have momentum. It passed the Assembly Transportation Committee with a vote of 13 to 1 and the Assembly Appropriations Committee by 16 to 1. It now faces a vote in the 80-member Assembly.

If it passes there, it would face a similar review and vote in the Senate.

Until recently, both the Highway Patrol and the DMV published guidelines for safe lane-splitting. But they removed the guidelines from their publications last year after opponents complained that the agencies appeared to endorse a practice that critics argued was not legal.

“The ambiguity gave riders the idea that they had a free ticket,” Lackey said. “These parameters will alert all motorists to the safe practice of lane-splitting.”

It has also been a hot-button topic. Motorcyclists view it as a special California legal loophole. But some drivers view it as a dangerous or unfair way to get ahead in traffic.

“Motorcyclists know it’s not safe. They just want to get from point A to point B faster than the cars,” Freeman contended. “We have drivers who are talking on their cellphones, who are texting, who are daydreaming. And this other distraction makes it a virtual circus.”

Former Los Angeles City Council member Dennis Zine had 33 years’ experience in the Los Angeles Police Department, 18 of them as a motorcycle officer. He said he himself splits lanes, at safe speeds, but thinks the principal issue with the proposed new law is ticketing a motorcyclist who is breaking it.

“Unless the pursuing officer is on a motorcycle, the officer in a patrol car cannot possibly apprehend the vehicle that is splitting lanes,” Zine said. “The bottom line is there is no law if there’s no law enforcement.”

Lane Splitting is Legal in California 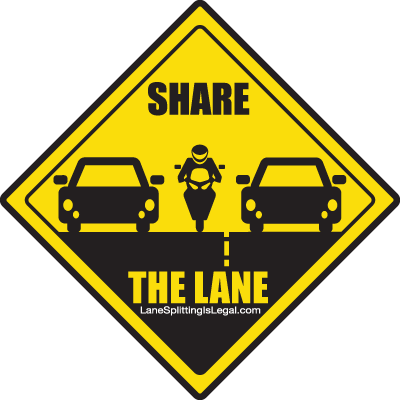 In simple terms – pay attention while you’re driving, don’t be a jerk and keep an eye out for motorcyclists and other vehicles. Oh, and please stop texting while driving before you kill someone.

Want to support our efforts? Buy some ‘Share the Lane’ stickers!