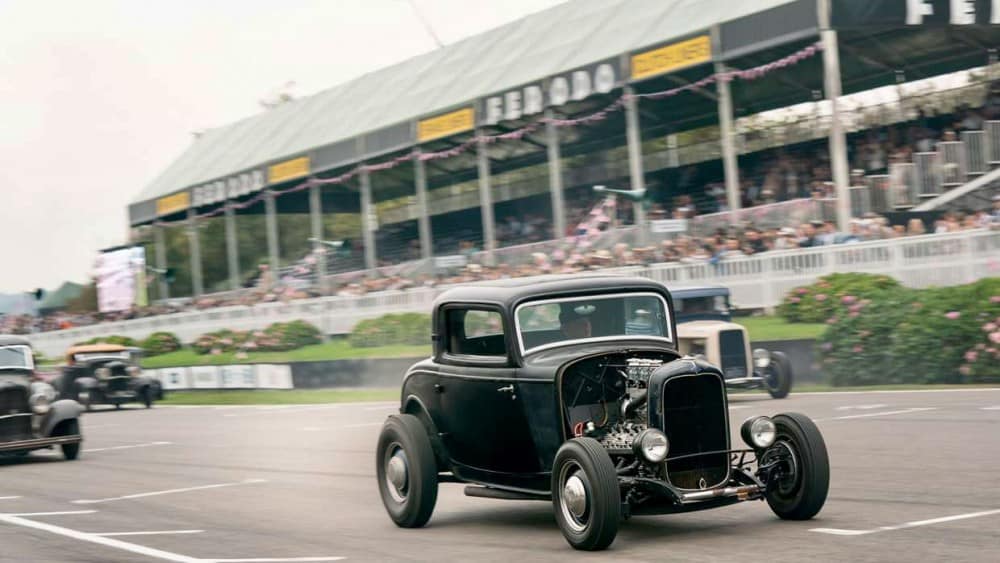 I Love my Motorcycles but have always been into Hot Rods too, infact back in the 1980’s I had a Chopped and Channeled 1932 Ford Coupe that was styled on post WW2 Hot Rods that were built after the the American Service men got back home and had all these New Skills.

I wanted to share with you lot what also turns my dial and back home at Goodwood last year, All the Hot Rods met for a great drive around this infamous Race track. Scroll to the bottom and once it starts, hit Big Picture and turn the sound up for almost 10 minutes of Flathead sounds.

Here is the write up:

The summer of 1951 saw millions of visitors flock to the Festival of Britain on London’s South Bank, a national showcase of British manufacturing and design, six years after the end of World War II and one hundred years since the Great Exhibition of 1851. Promoting British science, technology, industrial design, architecture and the arts, the Festival proved immensely popular as a “beacon for change” that helped reshape British arts, crafts, designs and sports for a generation.

To celebrate the occasion, Goodwood will be recreating a slice of that festival atmosphere at Gate 2 of the Motor Circuit. There will be nods to the vibrant colours of the Festival of Britain with colourful ‘lollipops’ throughout the trees and geometric patterns on the buildings, while the famous Hans Tisdall Cockerel mural will also be recreated. The area will be a hub of colour and entertainment and a helter skelter and Punch and Judy stage will provide entertainment throughout the day.

Goodwood will also be reviving the Festival of Britain Trophy which first made an appearance at the Whitsun meeting at the Goodwood Motor Circuit in 1951, inspired by the events taking place on London’s South Bank and across the UK. This year, the Goodwood Trophy has been renamed to celebrate 70 years since the Festival of Britain and will be contested by some of the finest Grand Prix and Voiturette cars of the 1930s and ‘40s, recapturing the derring-do atmosphere of inter-war racing as English Racing Automobiles take on the likes of Maseratis, Alfa Romeos and Talbots.

2021 also marks 70 years since Wally Parks founded the National Hot Rod Association in America and Goodwood is hoping to host one of the largest ever gatherings of the mean machines in Europe with the aim of there being one car for every year of the NHRA’s age. This iconic slice of Americana will be celebrated at a relocated Gasoline Alley which will feature bleachers, a mock drag strip, performance stage and dancing.

In addition, 16 of the infamous Rolling Bones cars are confirmed to attend. The Rolling Bones Hot Rod Shop in Greenfield Centre, New York is a renowned hub of automotive craftsmanship run by Ken Schmidt and Keith Cornell for over 20 years. The Rolling Bones will be joined at Revival’s colourful display by a number of their UK cousins, with representatives from key Hot Rod groups such as the Low Fliers, the Detonators (of which American F1 legend Dan Gurney was a member), the Originals and the Vultures.

There will also be the UK’s biggest gathering of 1932 Fords; the ‘Deuce Coupe’ of hot rod legend made famous by the Beach Boys.