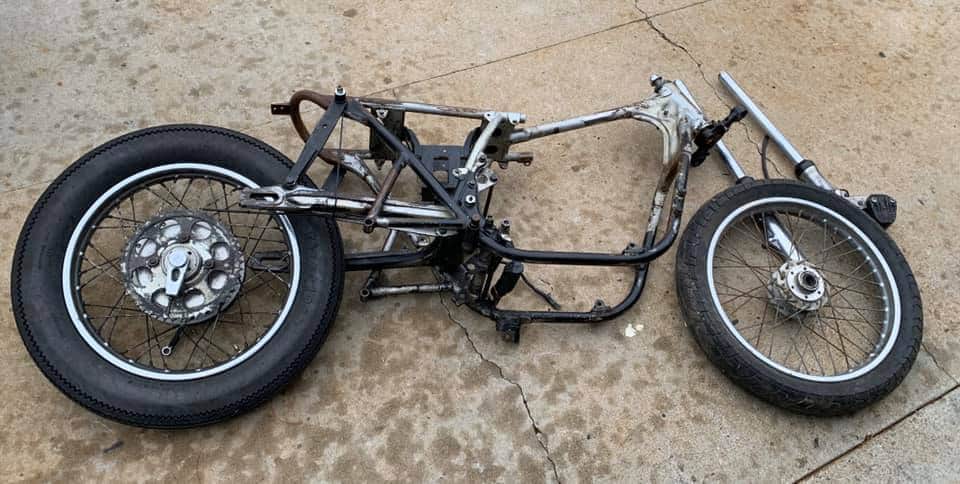 Well, I need to clean some of my old storage out and thought I would have a bit of a play about today, being its Sunday , and see if I can at least come up with some sort of rolling frame.

So a few bits and bobs were put together to see where this may go, not sure what style or Caff or Brat style but just having a dig around out of my old parts to see where we end up.

I had about 3 hours to spare today and wanted to try and at least collate some parts that have been getting in the way in storage and this would be a fun project to start on today in the garage.

So, a fun afternoon just playing with an old neglected frame that had been butchered up many many years ago and to save it from the junk yard, I took it off a friends hands and thought that I could at least do something with it and save another inline four from the scrap pile. 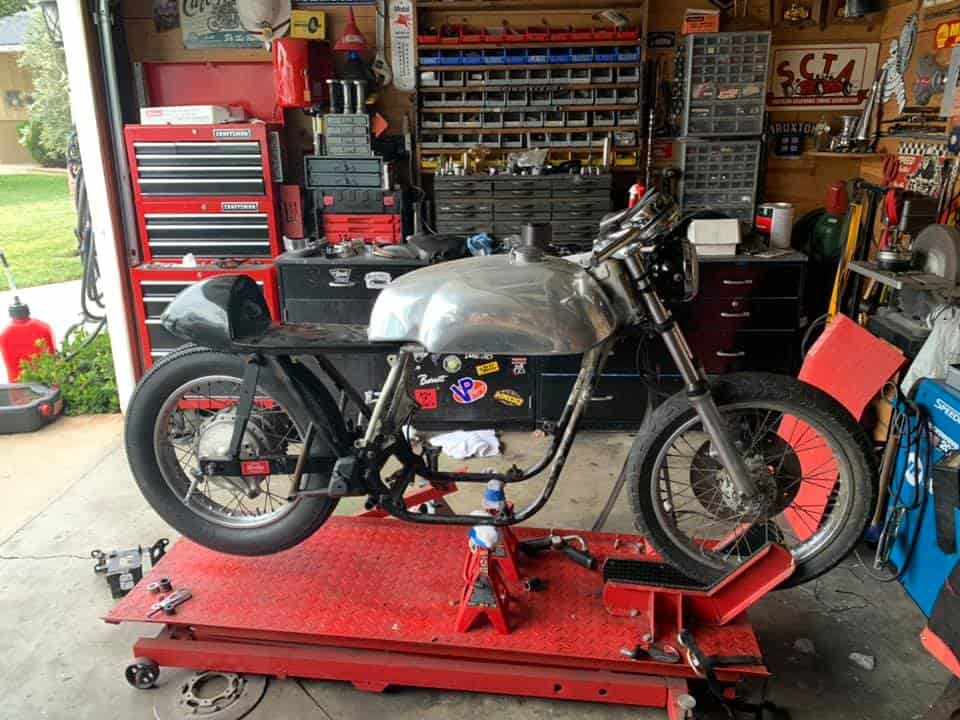 Well its all about there, not sure if I like it or not, the Alloy 5 Gallon hand Made gas tank is fun but not sure on the seat and I do not like the handlebars at all, but thats all I had kicking around the garage, either needs Clip on’s or a set of Ace Bars. 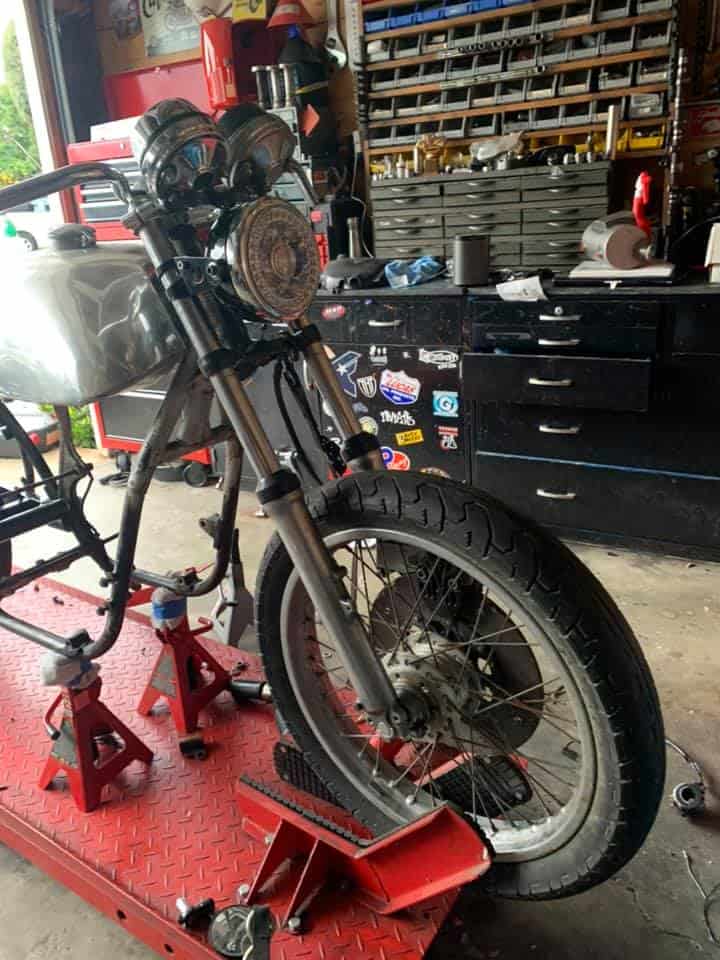 Not sure on the smaller LED headlight right now but I had these old parts laying about here in my garage, so its a mock up and I am sure this bike will go through a few guises until I am happy with the look and the style that I want to try and create. 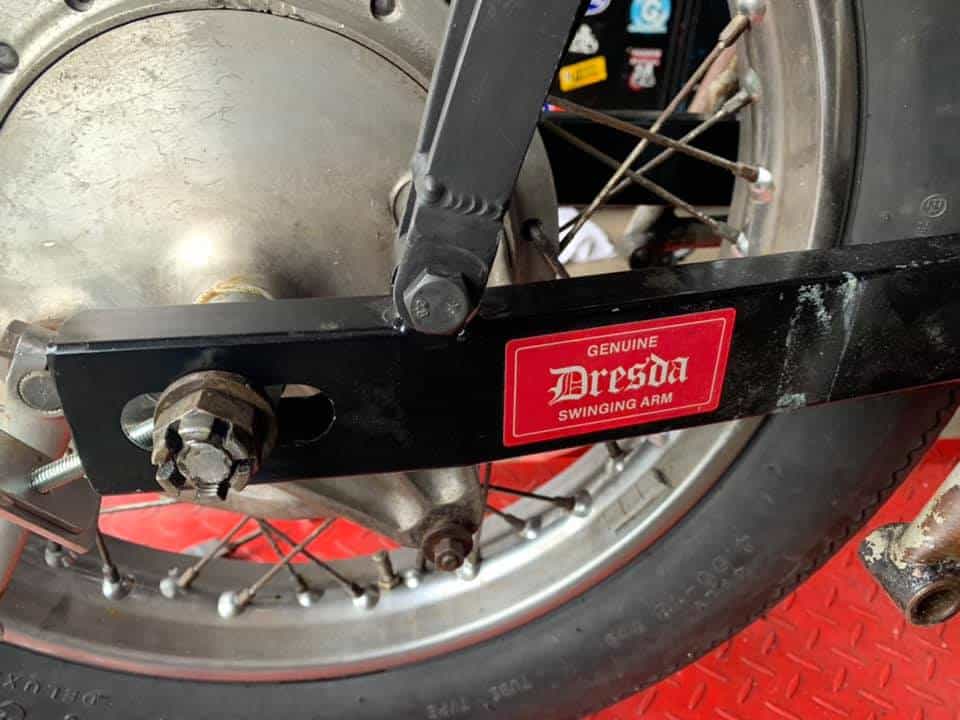 Up in my Rafters, I had a coupe of old Dresda swing arms, this one is a NOS CB750 version, so I thought I may as well use the thenig and am happy that I have, of course I shall run a wider rim later too as I want to fill that void up. 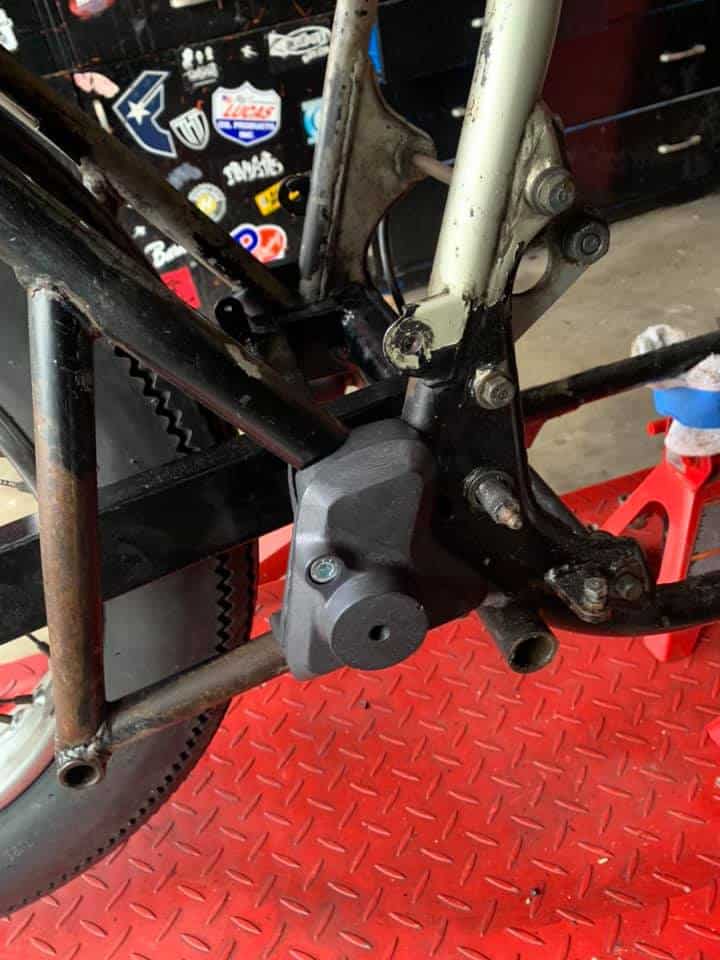 I had some old Tarrozzi rear sets brackets so if I go the Caff route, then the ends of the brackets of the frame will get nipped off and sealed up with weld for a clean look. 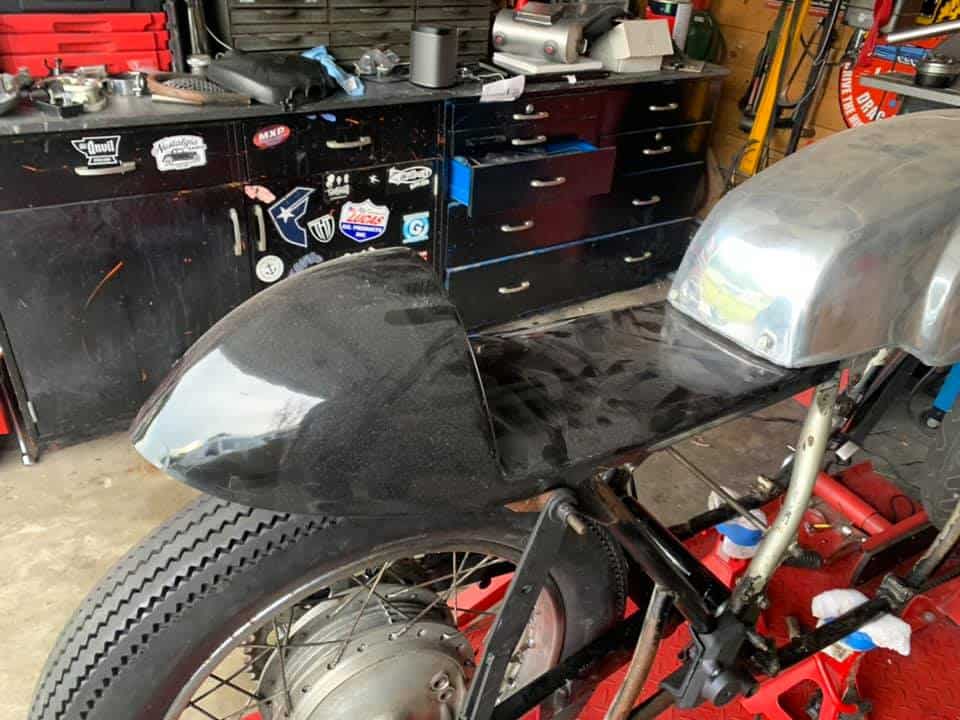 The whole point of me mocking the bike up , is to see if there is any parts that I really like and may help the bikes lines flow nicely, I am not sure on this old CR750 seat, its ok but I am just not feeling it to be honest, so I may put this one back in the storage and think again. 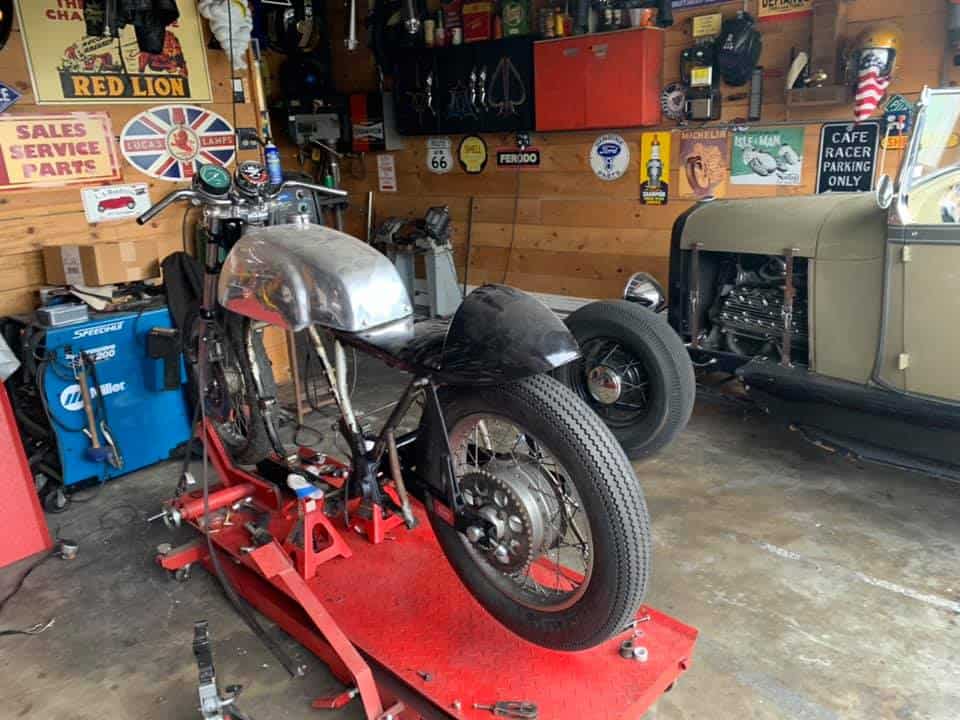 The 5 Gallon Manx tank is cool but I am not feeling it on this frame at all right now, mainly because I am not a fan of the handlebars I fitted, but as its a Sunday and I am using parts from the garage, it will do for a while but am sure this will change its look as time goes on here. 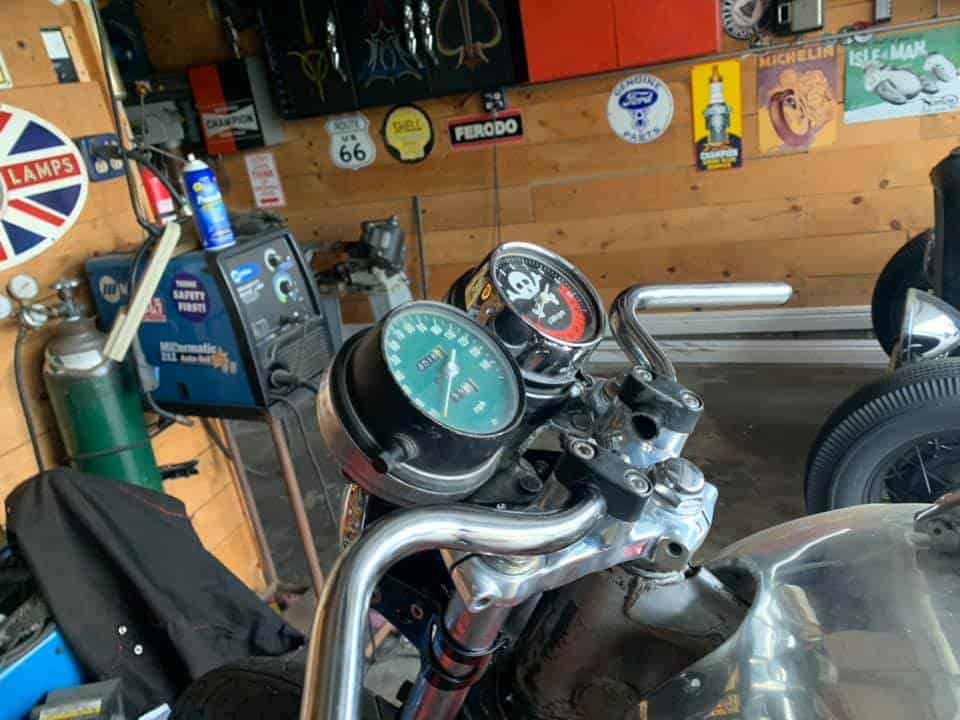 But I have it all mocked up and I may go with my Custom gauges, just for that Classic look and will refurbish the left speedo to match the Skull and cross bones tachometer. 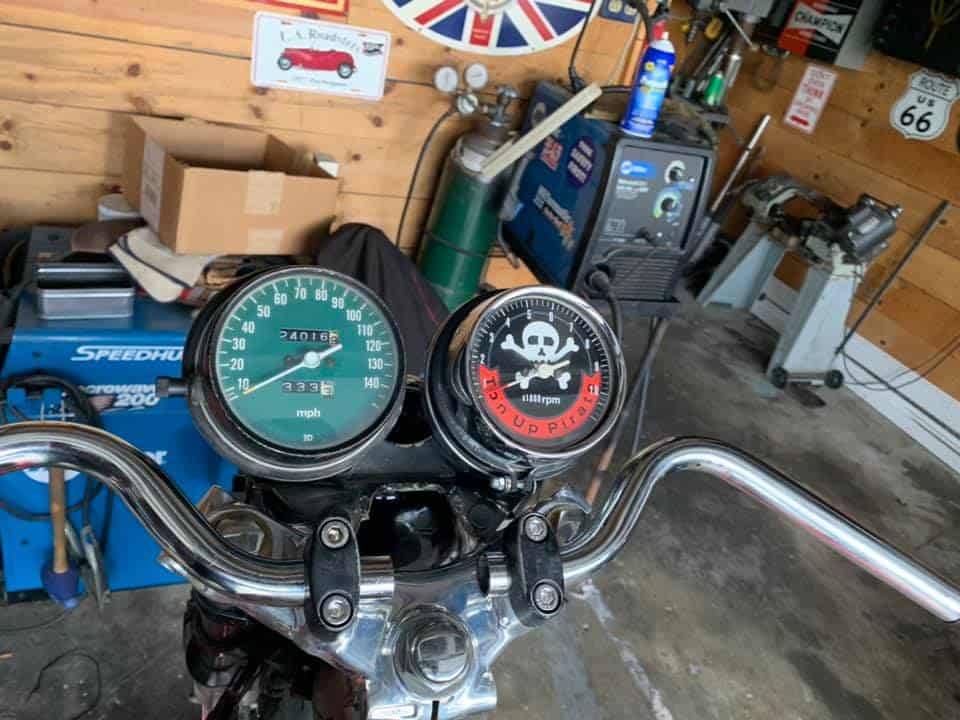 Just want to show that I do use old knackered parts and I can change the look and style right here in the garage, as this build goes along you will see some progress shots but I need to have a rolling frame that I am happy with, before I tear it all apart and start to the tiresome hours of welding, grinding, sanding and refurbishing, until i am happy with the way it is looking. 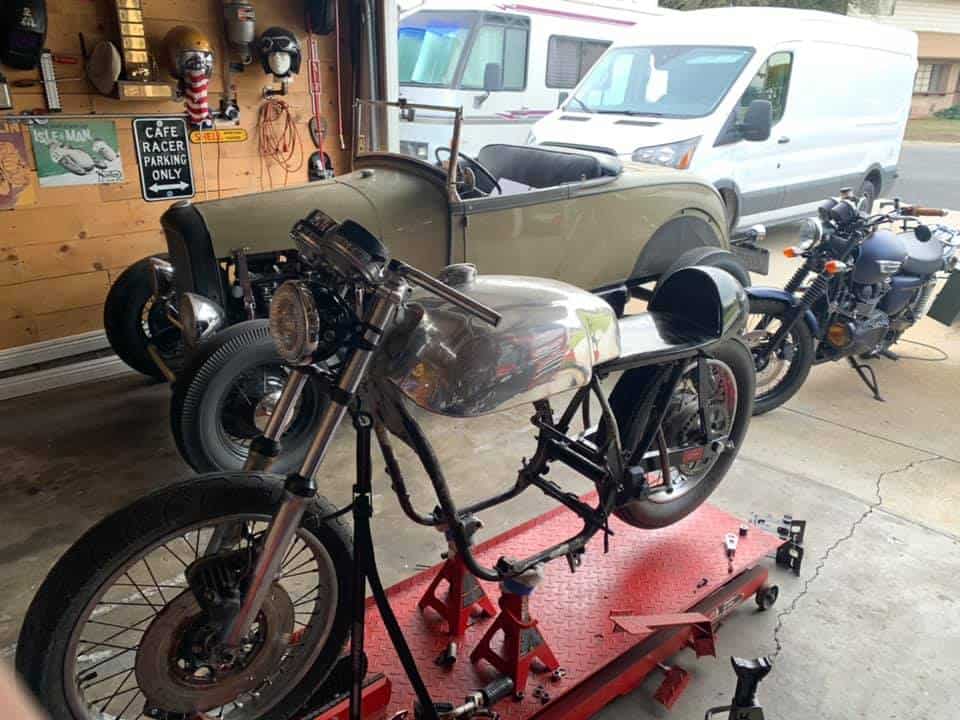 it looks ok but just not turning my crank, so i think I will try another petrol tank as some times that alone can change the lines and flow of a bike, so i have an old k3 gas tank I can plop on and see what that looks like compared to this Manx Alloy version. 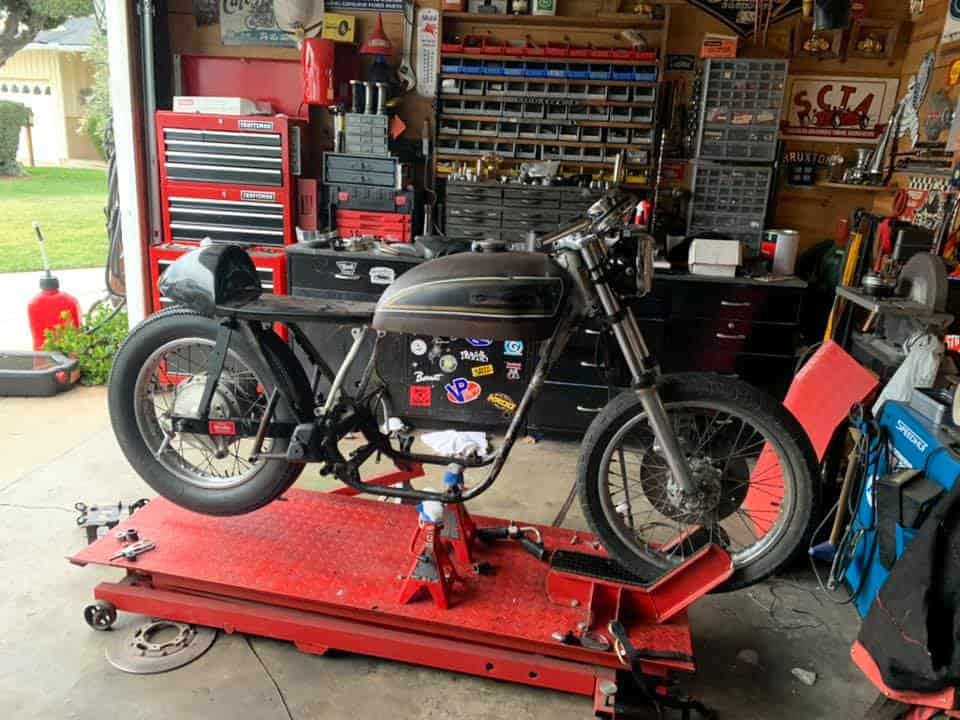 Well, I do like the Original tanks of the K series, but not sure I like the seat at all now, thats all part of the mock up, just keep going unto you are happy with the look that you are after, this may take some time, but its all worth it in the end, you just cant rush this stuff. 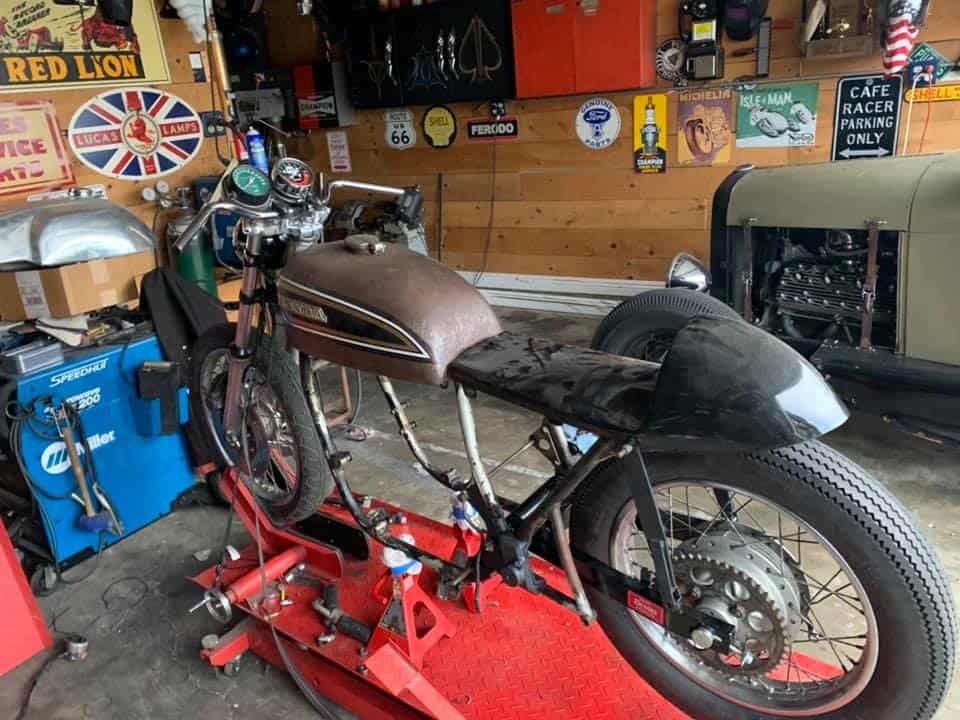 Well, the Handlebars are now doing my head in and as the light is starting to go I may pull the plug for this afternoon and re-charge myself once more and see where we go on this old girl. 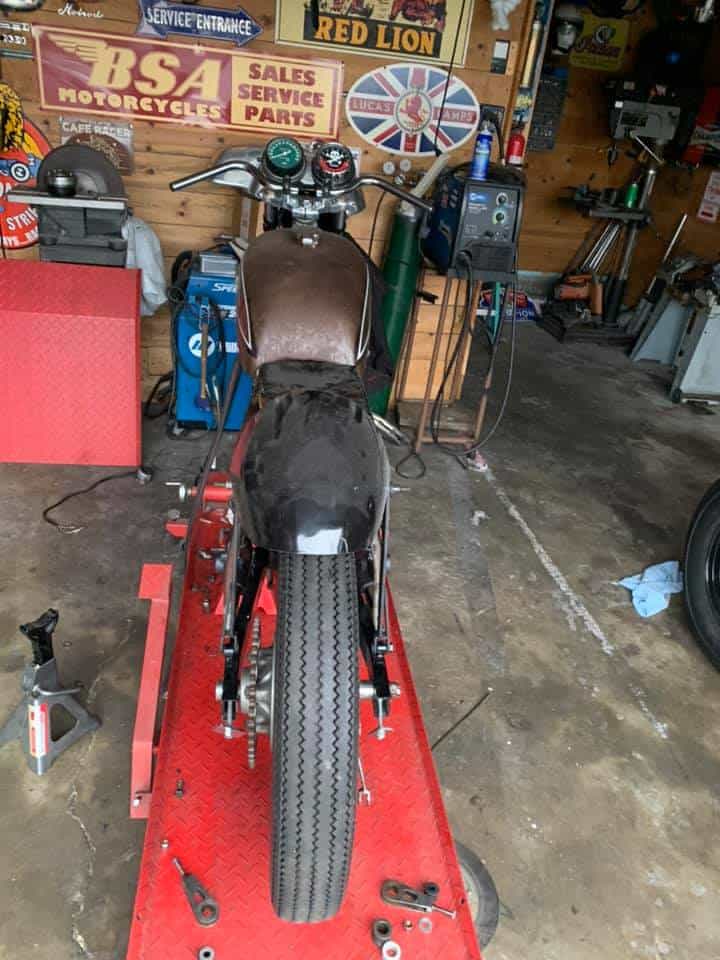 The main objective today was just to piece together a bunch of old parts that have been collecting dust in my storage and around the garage, so at least I have made some progress to some extent.

I am glad that I used the Dresda swing arm and hope to be banging out my own version of these again, but stay tuned to how this old K model is going as i hope to make a cool, head turning machine that will belt along the highways and byways of Southern California, stay tuned……………………………..