Well, Sunday the sun came out and by this I mean two fold, one, was my Shop Fabricator ” Dakota Kai Sun” was at Irwindale drag strip for the 1/8th mile races and two, the sun its self popped its head from out of the clouds, and began its demise of my European skin tone, to change it into burnt bacon.
Dakota gets to the strip in his New leathers and last years Kawasaki 1400 and ready’s himself the the 1/8th mile.

Kota is dialing his bike to the track as temperatures seem to be increase by every thirty minutes.

But also Kota’s Dad ” Aaron Pine is racing too and seems to be in the groove also, he is in the left lane.

Now Kota is back again for another run. This time in the right lane, and he aint into this lane as it has a double hump three quarters up the way and causes a rider to whack his chin on the tank .

Kota’s Dad ” Aaron” is now on the track for his second run at the 1/8th mile.

Aaron comes out for another run.

Dakota gets into the next round and is in the far lane, he likes the rev limiter in this round and gets a great E.T.

Everything seems to be going well on the rides he is having, but in Drag racing any glitch or hiccup and its all over for the day.
Kota seems to run well but is just pipped on time but he was fast too.

But a great day and here are some cool shots of the day for you lot to have a look and share the time that we had there too. 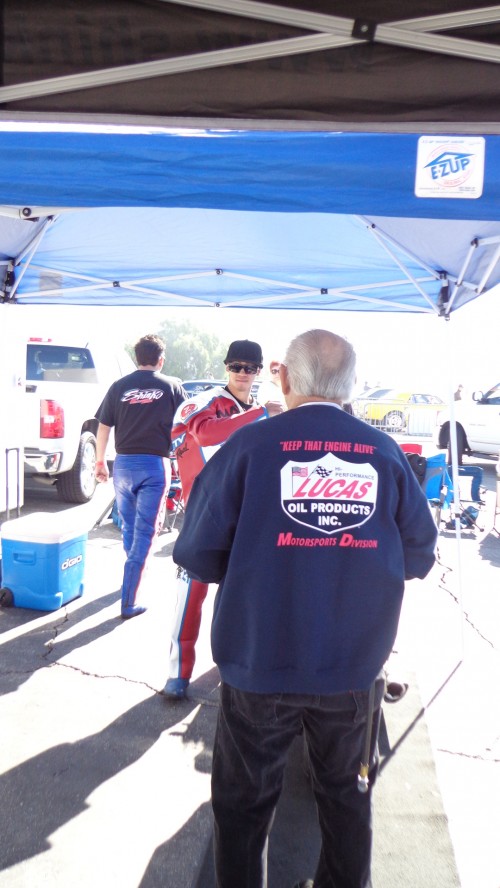 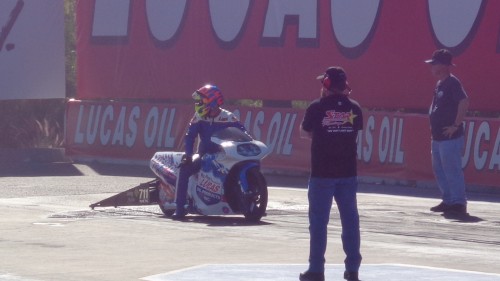 Kota’s Dad ” Aaron Pine” Checking to see if anyone wants to race with him today ! 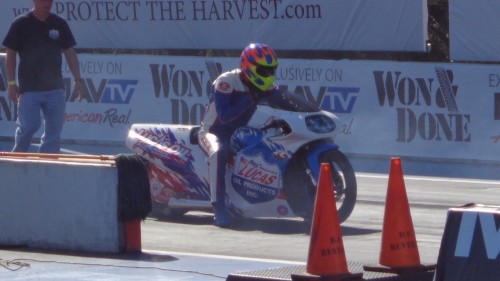 Kota’s dad on the line and ready to rock. 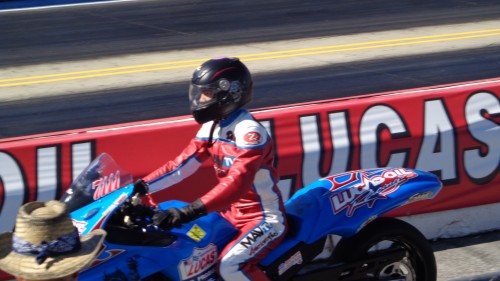 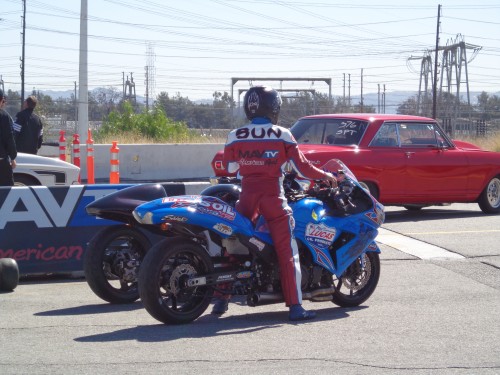 Watch out lads, as that’s all you are going to be looking at. 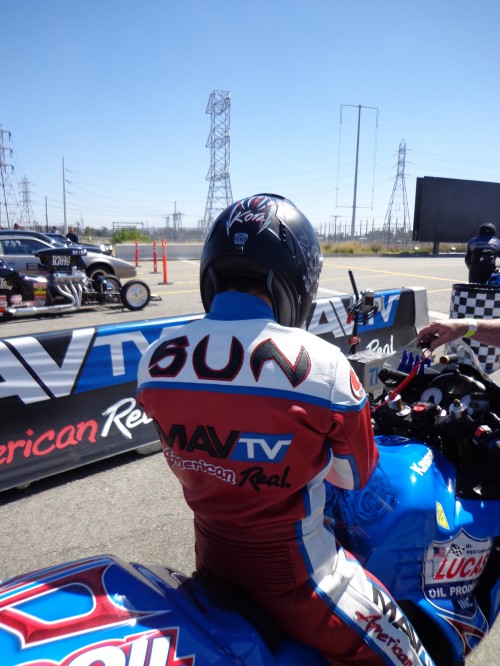 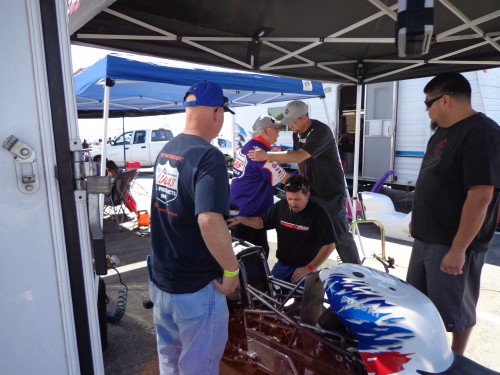 Kota’s dad prepping his ride for the next round. 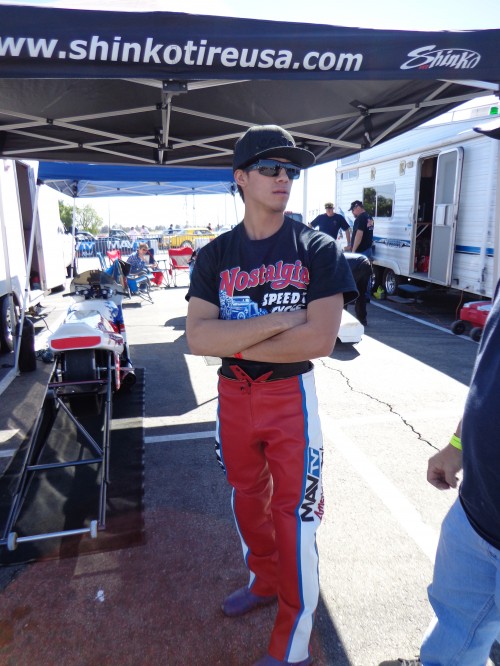 Just chilling until the next round for him.

Waiting in the staging lanes, and getting zoned to race once more. 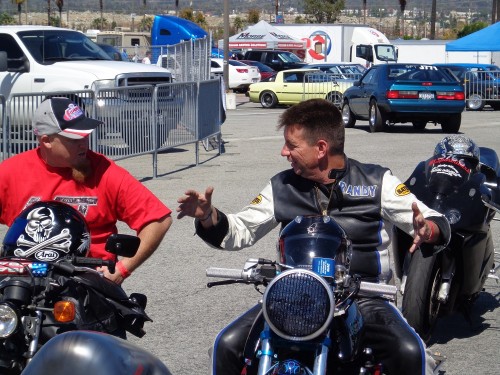 Other riders tell stories of how far ahead they were of the other guy. 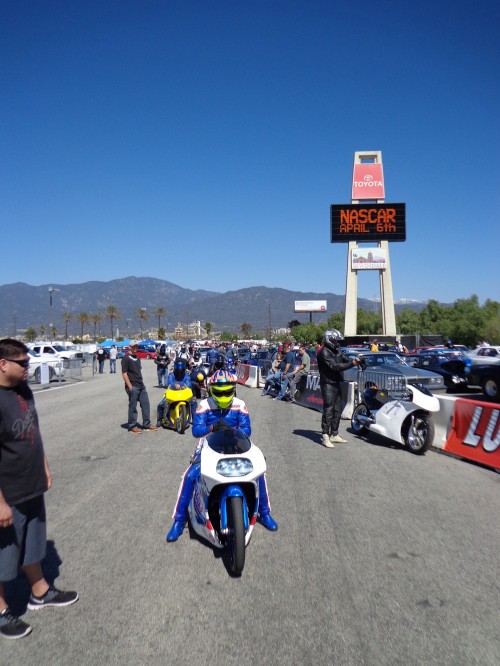 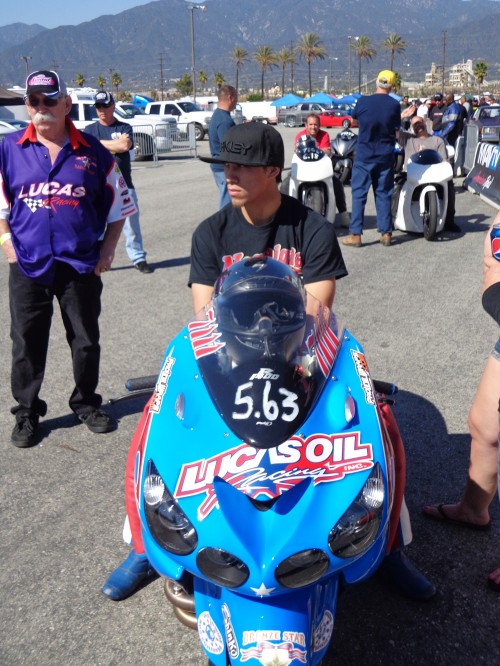 Aaron and Dakota trying to focus and get prepared for their next 1/8th mile run they have. 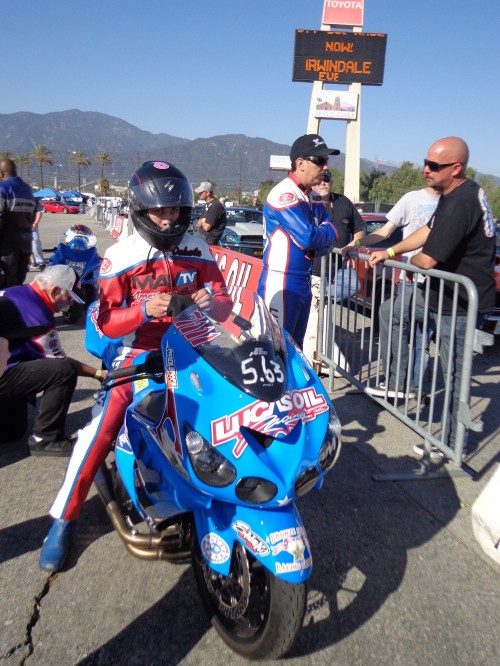 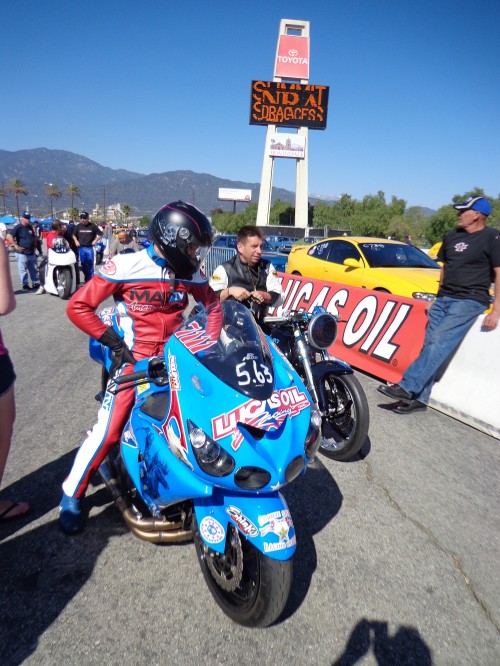 Today was super hot, almost 80 degree’s and with a New leather set of gear on, it gets pretty uncomfortable out there waiting to race. 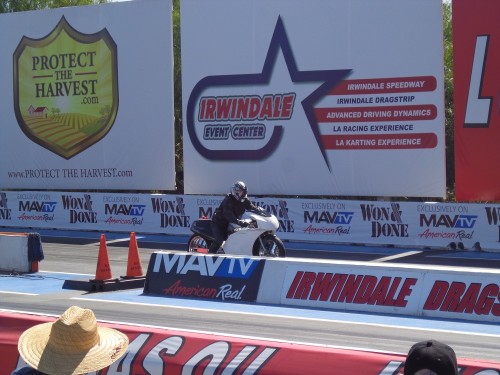 Another one goes by the wayside. 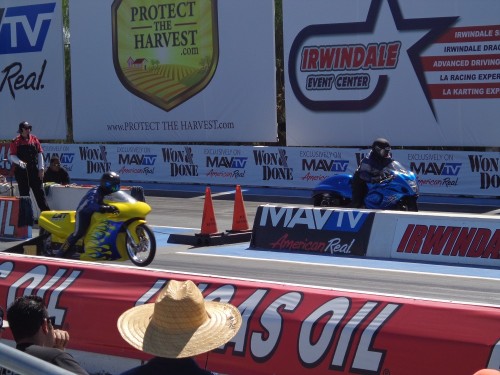 More bikes battling it out in the rounds to try and get to the next stage. 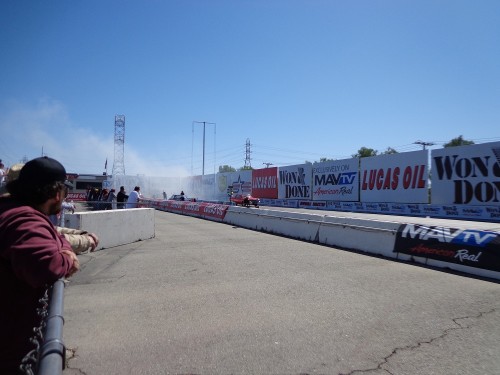 oh yes, there were more than just bikes there at the Irwindale track today and was great watching the Gassers fly by. 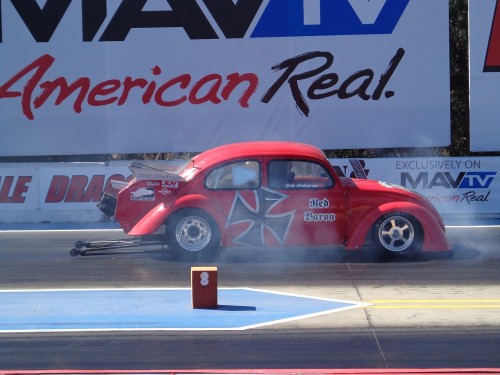 Little Red Baron beetle was as quick as hell at the track, I was really surprised at some of the passes this Dub made. 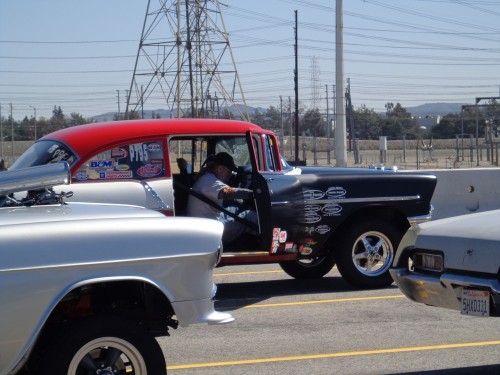 yes, there were some cool rides there, the 56 in the background and the 55 gasser in the foreground sounded awesome. 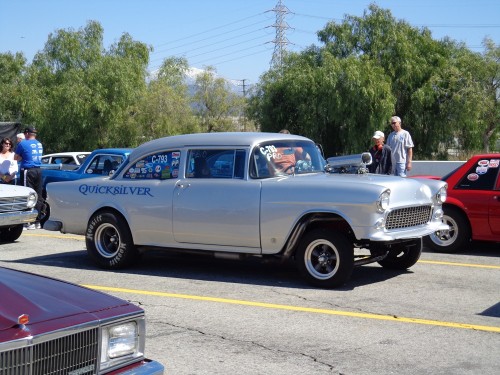 Bow tie from 55 all decked out, Big motor with 10 degree rake, 5 spokes and radius rear arches, straight axle and plexi glass made this tri-Chevy a much loved favorite. 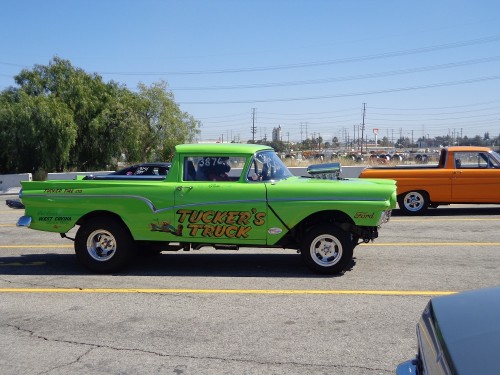 Another Gasser, this time an early 1957 Ranchero was making some hard 6’s at the track. 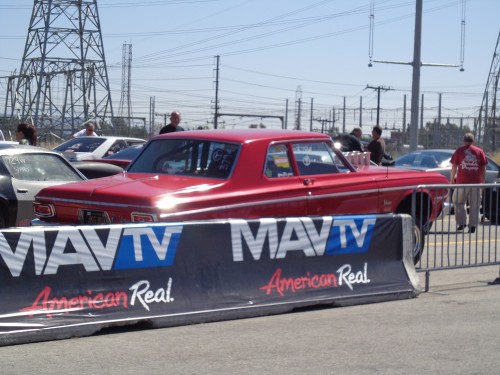 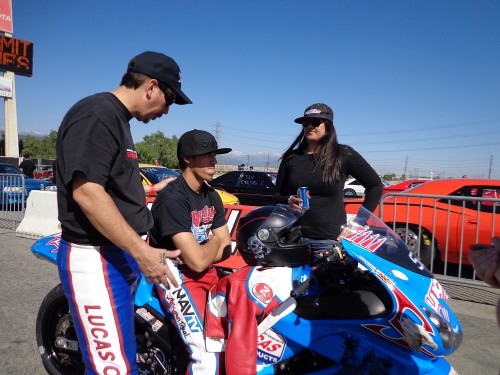 Kota’s dad giving him some advise. 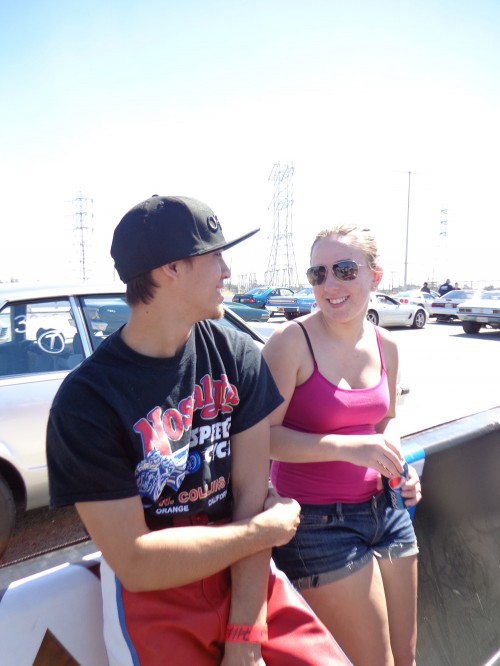 Kota and his Girlie chill in between racing. 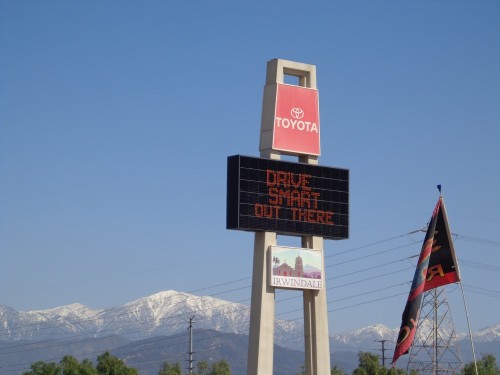 it was almost 80 degree’s but there’s still plenty of Snow on the mountains behind. 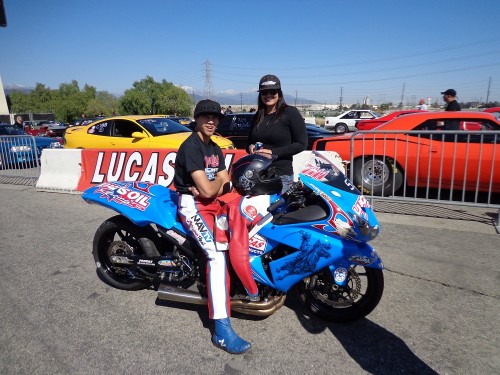 Kota and his lovely mum sit at the lanes awaiting the call to get on the strip.

Even though he didn’t get to the final, which he is very good at doing, bracket racing is a tight race everytime and a split one thousandth can send you home, but he did great and we are very proud of him.

Has an awesome day there and we all enjoyed our selves but boy did I pay the price for sitting with no baseball cap on. 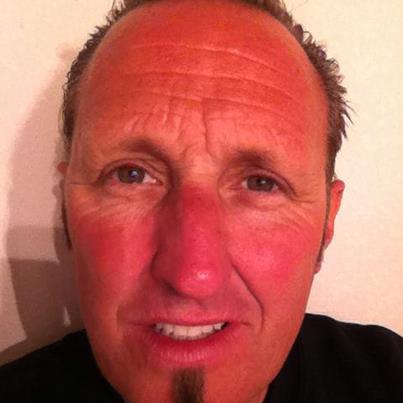